He has his Web site, TV show, radio show and soon an autobiography. So why isn't Matt Drudge happy? 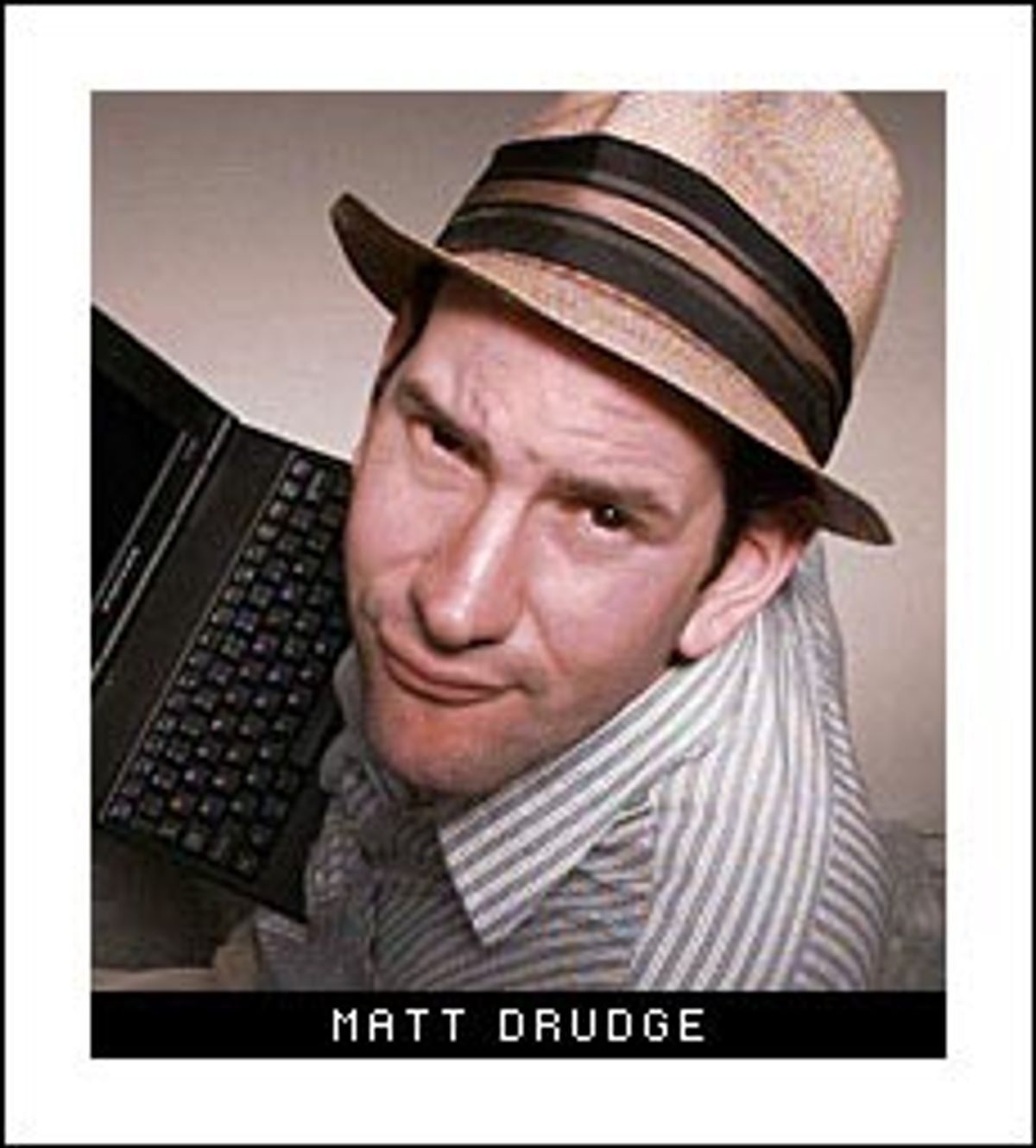 It wasn't exactly Gore Vidal vs. William Buckley when Matt Drudge and Michael Kinsley squared off on C-Span's "Washington Journal" Monday morning, though one caller did invoke that dynamic duo of decades past when he got through. "It's good to see these two men together," he said, before referring to the famous fisticuffs that broke out on an ABC set in 1968 and caused moderator Howard K. Smith to ban them both.

"I don't think they'll be performing together soon," said Kinsley. From the look on his face it didn't seem too likely he'd be sharing a mike with Matt again in the near future.

Kinsley, of course, was a regular presence on the Sunday talk shows during his New Republic days (and ultimately of course cohosted his own, CNN's "Crossfire") before taking the helm at Microsoft's Slate, back when Drudge was still folding T-shirts at CBS's Hollywood gift shop. This goes a long way toward explaining his still, almost monkish manner; anyone who can survive the hot magma of professional blowhards like Novak and company has earned his stillness. But the new Kinsley is almost somnambulistic, as if he has faded into the woodwork of the Pacific Northwest; his appearance was almost spectral in contrast to Drudge's larger, beef-fed dimensions. Drudge is coming at you with a vengeance. You can still find his fedora-clad head on the Fox News Channel every weekend. (C-Span made him lose the hat.) His syndicated ABC radio show reaches over 100 stations coast to coast, the Drudge Report boasts a million hits a day and it was announced last week that Penguin Putnam was paying him a half a million dollars for his forthcoming autobiography, "Let the Future Begin." Compared to Kinsley, the 31-year-old gossip monger is the king of all media.

But if Matt Drudge is a happy man, he hides it well. His site was hacked last week by a band of Internet pirates calling themselves the United Loan Gunmen (they also got C-Span, Nasdaq and the NAACP), an insult he seemed obsessed with on his broadcasts over the weekend. The $30 million libel suit brought against him by White House aide Sidney Blumenthal is still pending and he has taken to soliciting Web site visitors to support him in his defense. (Salon contributor David Horowitz is heading up the campaign.) And a full month after the Columbia Journalism Review cited his outing of the Monica Lewinsky affair in 1998 as one of the 10 Key Dates in the Media This Century, the man still feels dissed, especially by those he terms the media elite.

"Washington Journal" broadcasts three call-in numbers, with the labels Liberal, Conservative and Moderate. (I like to think that each has its own hold music, say the Buena Vista Social Club for the liberals, John Philip Sousa for the conservatives and maybe John Tesh for those folks in the middle.) A "liberal" caller opened the show by congratulating Drudge on his success as a gossip columnist. He then added, "Your lack of education shows with your lack of logic," and Drudge actually seemed to wince. The show's moderator, Brian Lamb, made reference to Drudge's lack of college education (contrasting him to Harvard-grad Kinsley) and Drudge has claimed the distinction as a point of pride in the past, telling anyone within earshot, You too can be a member of the press. (It's easy!) But speaking of the relative success of his radio show he seemed sensitive, at one point calling his host gig "something to fall back on. I'm not as smart as Mr. Kinsley."

Drudge's desire to have it both ways -- to be both righteous warrior of the common man and the poor put-upon guy whose daddy couldn't get him into Harvard -- permeates everything he does. It's actually the least attractive thing about him. The outrage the Washington press corps felt at even having to utter his name last year was an enjoyable spectacle for some of us outside the Beltway. Long before anyone knew the names of Lewinsky or Willey, the one-man news clearing house had broken several big media stories (Connie Chung's ouster at CBS, that evil spawn of two corporations known as MSNBC) and at least one political one (Bob Dole's choice of Jack Kemp as his running mate). The fact that he had done all this (as he never tires of reminding people) from his $600-a-month apartment in Hollywood with a staff of two seemed almost charming in a Horatio Alger kind of way.

But as Drudge's fortunes increase (his estimated combined earnings from various deals should exceed $1 million next year) his Columbo routine is wearing thin. Comparing their respective Web sites, Drudge told Kinsley, "You work for the richest man in the world" -- leaving it to moderator Lamb to point out that Rupert Murdoch, Michael Eisner and Steve Case (AOL carries the Drudge Report) were no slouches in the filthy lucre department. (Salon, for the record, was twitted by both, mostly for its gargantuan, bloated, lazy staff. Kinsley sniffed that Salon's masthead was much larger than Slate's; Drudge called it "just a big, fat operation.") Drudge wants to be identified with the little man -- "I'm Matt Drudge, keeping an eye on all the rascals," he said in signing off on Fox this weekend -- but wants to be treated like a player.

Most distressing to journalists (the kind who went to J-school, if not those fancy colleges Drudge derides) is his refusal to follow up on the leads he publishes. You would think that the Blumenthal suit (filed after Drudge wrongfully accused the former journalist of spousal abuse) would have taught him his lesson, but Drudge dismisses it as a White House attack, payback for making the world aware of Monica. As recently as August, Drudge went with an item taken from an internal New York Times news service that claimed Ted Turner was putting his face on a massive billboard in Atlanta. Not exactly stop-the-presses stuff, but easy enough to check. When the not-for-publication tidbit proved not to be true, Drudge shrugged off criticism, saying, "My theory is that if things are moving out on wire services, it's pretty much public information. The future is all wires. Once something is literally typed and sent out over any network it's going to be hard to hold any of it back."

The Times took a rather different view of the matter, branding Drudge's move no more than theft. Drudge tried to laugh it off in mock-sinister fashion -- "I have access to all your internals" -- thinking no doubt of Walter Winchell's old radio slogan: "He sees all ... he knows all." But by disseminating bogus information, Drudge is squandering the very credibility he worked for (or lucked into) with his scoops. It is doubtful that Winchell, whom Drudge clearly emulates, would have seen the wisdom in that. He prided himself on being able to pick a winner.

It seems Drudge can't resist shooting from the hip. At a Washington Press Corps luncheon last year he was asked what sort of item he wouldn't run with. He replied, "That Phil Hartman may have met his wife through a prostitute doesn't necessarily interest me." It wasn't necessarily true, either, and he had no business repeating it. He just knew it would get some attention.

With his Monicagate revelations, Drudge received more attention than perhaps any other individual on the Internet. And when some of his most far-fetched allegations (the semen-stained blue dress for example) proved to be real, he even earned a sort of grudging respect from the very reporters who despised his style. But the shrillness of his message and his association with devoted Clinton foes like Lucianne Goldberg and Richard Mellon Scaife (who is paying much of Drudge's legal bills and admires Clinton the way that crocodile admired Cap'n Hook) just makes him seem like another squeaky wheel in the anti-Clinton machinery. He seems not a journalist at all; just another partisan.

Whether Drudge can take it as well as dish it out remains to be seen. A bleary C-Span caller from California (who ultimately volunteered on air that he was stoned) asked him about some common Drudge rumors and the muckraker replied, apparently for the record, "I am not gay ... I haven't done cocaine." But when pressed further he fell back on the standard defense, "I'm not running for office."

Nor is he likely to anytime soon. One of Drudge's current obsessions is a piece that Strobe Talbott wrote for Time magazine before he moved to the State Department. In it, he extolled a brave new future of a global economy -- you know, that new-world-order stuff that drives the right crazy. Speaking in Talbott's defense, Kinsley reminded Drudge, "As a journalist your job is to throw caution to the wind" -- i.e. to say what one thinks, without regard to the consequences. Kinsley's fine distinction, of course, was probably lost on Drudge. God only knows what voters would make of some of his utterances. He's forgotten a few of them himself. But he boasts of his ability to hold a grudge and promises to name a few names of his own in his autobiography, due out next year. "I do use my real name," he said by way of farewell on Monday (unlike some of those reporters who make fun of him).

But no one accused him of making that up.