The new economy marches on, its front lines manned with recruits from the nation's top business schools -- elite training camps for the capitalist army. 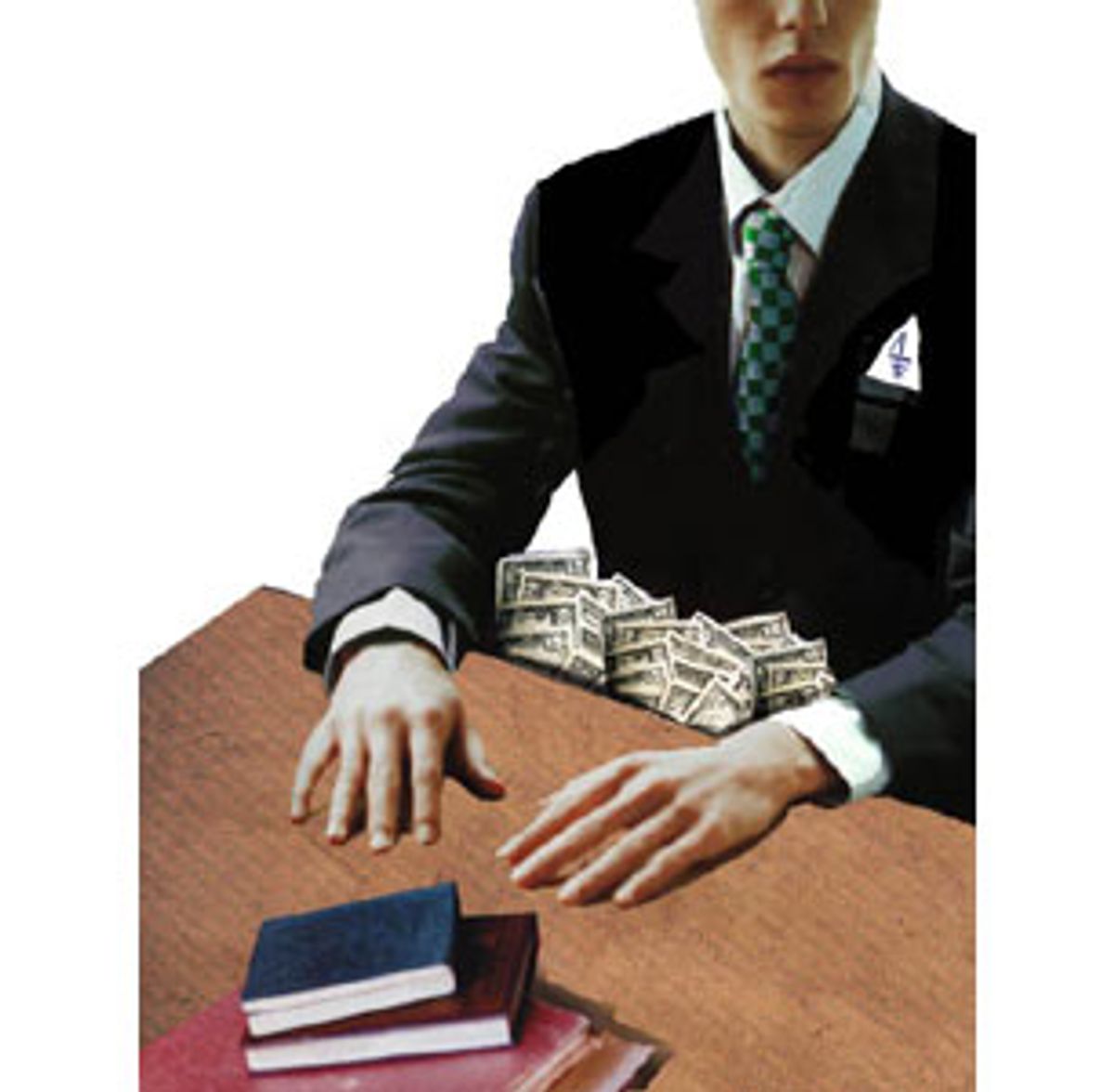 The bar was always open and the alcohol flowed like water from a fire hose as Columbia Business School welcomed its new class of MBA students with a week-long orientation. In an era of ubiquitous capitalism, perhaps it should surprise no one that business school should teach high-priced schmoozing and boozing as well as spreadsheets and finance. But Columbia B-school's orientation takes the mission to a whole new level. Before a single class had been attended or a single assignment had been completed, incoming students became the focus of a frenzy of corporate glad-handing and business networking.

My wife, a former advertising professional, was one of the young initiates. She thrust herself into B-school orientation on the Manhattan campus and I tagged along. It started sedately enough with a day of lectures and welcoming speeches. It ended with bacchanalia in Midtown: an open bar funded by corporate sponsors, with bar-hopping afterward on somebody else's tab.

Next, the new class was given a fete at Chase Manhattan's headquarters so the bankers could get a look at the new crop of corporate warriors. With hors d'oeuvres piled high on the tables and the booze flowing liberally (my wife's first drink was a G&T with two inches of gin and half an inch of tonic), the students began to get a picture of their new life. "It's when you realize you're the one being recruited now," said one student happily. "It was pretty nice." Another female student described the glad-handing a little more succinctly: "These places have a hard-on for MBAs."

Indeed. Although many business schools can boast that their graduates enjoy high incomes and myriad job opportunities, admission to Columbia is virtually a ticket to the good life. Columbia may have trailed Harvard in the Financial Times as the No. 2 business school in the world, but the average starting salary for Columbia graduates is the highest in the world. Students can expect to make more than $150K their first year after graduation, which is not unreasonable considering Columbia's published salary ranges for its 1998 graduates hit $375K in certain industries. Some lucky students play companies off each other in bidding wars.

The university works with relentless fervor to get jobs for students, with a well-staffed career office and constant, almost paternal advice on the art of getting a job. Career staff hold students' hands as they navigate the labyrinth of interviews, offers, rejections and bids. In orientation week, networking seemed to take on a manic quality, as students attempted to catalog all their future recruiters as well as their 485 new classmates in whirlwind meet-and-greet sessions. And all of this with a drink in their hands and three already under their belts.

Happy hours and dinners continued nightly all week, everywhere from overpriced restaurants to the Paddlewheel Queen dinner cruise ship. Some new students skipped the daytime orientation events to muster the energy to survive the "real" orientation at night.

At one drink-fest, the sense of entitlement was palpable; students grumbled at being offered only well drinks. Former investment bankers ("I-bankers" in the local parlance) mingled with consultants, all overwhelmingly homogeneous in cropped haircuts and Polo shirts, toothy smiles glued onto their fresh white faces.

According to Columbia, the incoming class is 35 percent women, which would make it one of the most diverse of the top B-schools, but the crowd didn't seem to reflect this. Maybe it was because the men were clustered in knots around the women, 6-foot pillars in khaki obscuring pairs of women wearing the inevitable black uniform. The women had a buyers market, and the aggressive men seemed a little stymied. "The good ones are always taken," a guy told me with a chagrined smile, nodding in the direction of a testosterone huddle.

But these young men don't seem overly concerned. They need to learn about market dynamics, after all. And perhaps they're too busy acclimatizing themselves to their soon-to-be-rich status. In polite company, comparing salaries is akin to comparing penis sizes. But here talking about either seems an appropriate topic. In their applications, new students cloaked their motivations under the rubric of leadership or service, but here at the orientation bashes, they unveil their true intentions. In confessional tones, people admit euphemistically to wanting a "quality of life." Yet when one student dared to mention a starting salary shy of a hundred grand, he was summarily silenced with boos and laughter. Make no mistake: These young scholars of commerce are here to make money.

Many of them have already made significant hauls in their prior careers, enough to fund the endeavor, which will end up costing them more than $100,000 in tuition and living expenses. "I calculate it at more than $300,000, if you factor in the opportunity cost of lost wages," said a student. Not everybody had his previous job, so many are going into debt. It is startlingly easy to rack up loans, as banks are tripping over themselves to lend to B-school students. Some people put the $100,000 on loans and credit cards in a perverse twist on the concept of the time value of money. "Ten thousand dollars now makes a big difference," explained one friend of ours, "but $10,000 in two years will be nothing."

As a result, many of the students are already living expense-account lives and assembling closets full of $1,000 tailored suits, Hermes ties and shirts custom-made at Saks. Many wear Rolexes. My wife, wondering aloud if they all were real, was rudely told by an Omega-wearing classmate, "Of course they're real -- they only cost 2,000 bucks. You want a Rolex, I'll buy you one. Besides, Rolexes are so out, anyway. Everyone in my office had a Navigator. What else are you going to spend your money on?"

Actually, the incoming business class has plenty of ways to hemorrhage money, the least of which is a Wall Street wardrobe and accessories. Laptops are required, Palm Pilots de rigueur, cell phones ubiquitous.

Now that the week-long bacchanal is over and the semester proper has begun, at least once a week someone uses the B-school mailing list to e-mail pleas for a lost Palm. When a professor changes an assignment date, it's a virtual quick-draw contest as students unsheathe their electronic organizers. Cell phones chirp in class, in the library and during the middle of talks by corporate guest speakers. While the school requires laptops and has spent millions on wiring the classrooms and libraries with Ethernet connections, most students only bring their computers if they want to day-trade during class. To help them, Columbia provides a running stock ticker on screens at either end of the B-school lobby.

Commerce and education mix easily at the B-school. In fact, that is the point. While in other circles in academia people get a little queasy when corporate culture gets too close, here it is precisely the point. More than 200 corporate presentations for students are scheduled between the start of classes in the fall and winter break. The school Web site has an area for its "Corporate Partners," many of whom contribute vast sums to the school. Over 500 companies interview on campus, scheduling more than 6,000 interviews in a typical season.

The corporate recruiters do indeed have a hard-on for the chance to get access to the student population. They are so aggressive that in previous years students have complained about the pressures of recruiters during their first weeks of classes. In response, Columbia has recently banned official recruiting events for first-year students during the first two weeks of classes, just so the new students can get acclimated to attending school again. Even so, student e-mail accounts are being filled with advertisements for recruiting sessions immediately after the two-week moratorium. "Join our team," says the mass e-mail from a major bank.

Columbia, along with other top B-schools across the country, has become a headhunter for the corporate world. This is not to say the students don't learn anything. Columbia offers a very traditional core of business classes. First-semester students take five required classes: accounting, economics, marketing, statistics and finance. In the second semester, they get to choose one elective. Yet more important than what they will learn is the simple fact that they were admitted. Columbia accepted about 10 percent of those who applied this year. With an average GMAT score of 700 -- in the 99th percentile of all those taking the test -- many students are ready to think big. One student described his ideal job this way: "I want to buy companies in trouble, improve them and sell them again after I'm done." At 27 years old, he already makes venture capital sound like selling lemonade on street corners.

The top business schools have screened for such chutzpah, scooped up the cream and rejected the rest. Why else would companies be recruiting before classes even start for the first-year students?

Matt T. Stover is a writer living in New York, trying to help pay off his wife's mounting debt.