Stereolab on philosophical systems, the economics of small record labels and why you shouldn't have sex to Barry White. 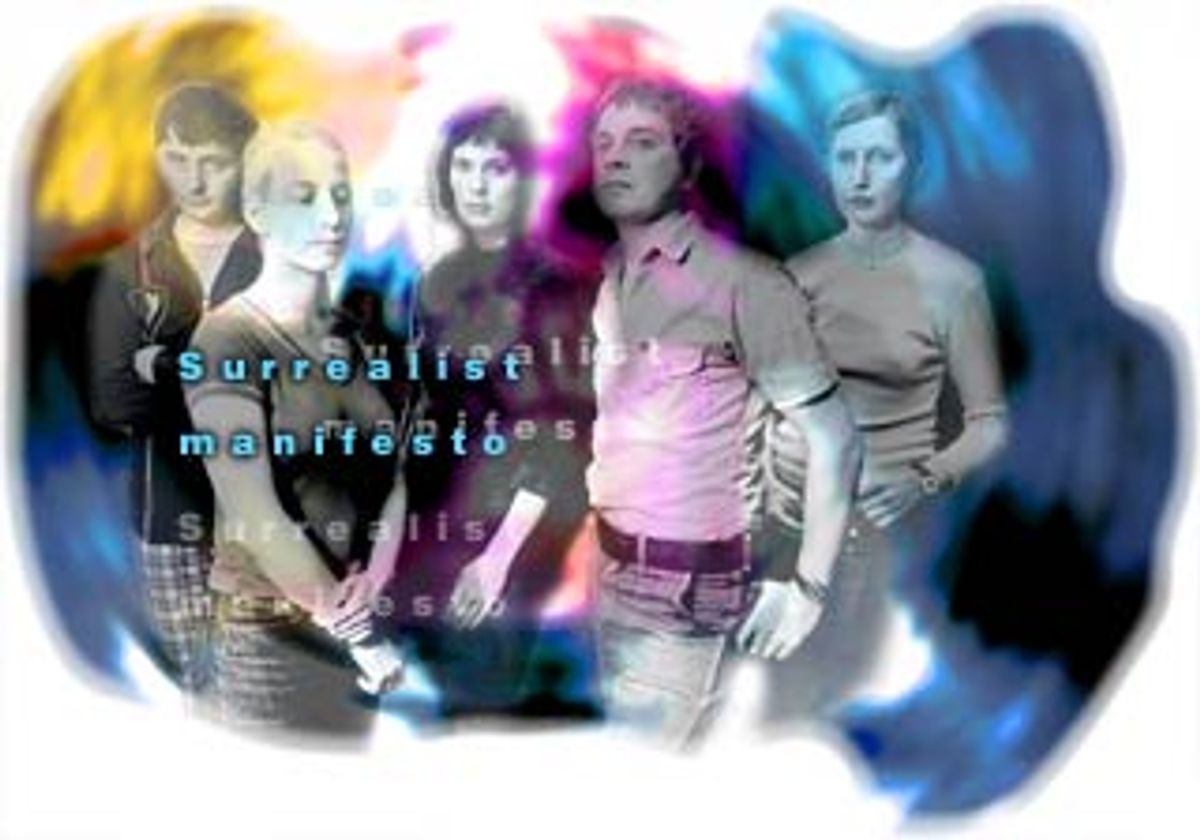 Formed in 1990 by English guitarist/record collector Tim Gane and French singer/keyboardist Laetitia Sadier, Stereolab draws from both obscure music genres and fashionable academic theory. The confluence of sound and ideas produces mixed-up collages of German experimentalists and Brazilian songwriters, of Karl Marx and filmmaker Stan Brakhage. Coated with a sheen of bubbly vocals and pop dynamics, the combination makes for often beautiful, exhilarating music. At times, sure, it's maddening and dense, like a puzzle or a complicated children's toy. You want to pick it up and pull it apart until you figure out exactly which pieces make it work.

That's not necessarily the best approach, as I found out in an interview with Gane and Sadier. We were talking about their new record, "Cobra and the Phases Group Play Voltage in the Milky Night," and I told them that I was impressed because the band seemed to use jazz on it in the same informal way that it had used funk on "Emperor Tomato Ketchup" (1996). Gane laughed. "It wasn't supposed to be funk," he said. "It was supposed to be swing, with all of the instruments playing the same riff."

The fascinating part is that Gane and Sadier and the rest of the band hope for that kind of misunderstanding, going so far as to expect it from their listeners. The possibility of hearing something on your own, to be able to listen with new ears and to misinterpret -- it's part of the plan.

On a recent visit to the band's label in New York, Gane sprawled across a leather couch with his feet up on a glass coffee table while Sadier often stood up to walk around the room and glance out the window as her partner answered my questions.

Gane: Cobra is a 1940s and '50s surrealist group. And the Phases Group, that's a group of surrealists. But that's not really important.

It's just words -- a cut up. Some of it was cut up from this great [Andri] Breton biography.

Is surrealism a recent fascination, or an enduring one?

Gane: Nah, since we were teenagers. Dada, surrealism, situationism -- all that kind of stuff: We think about it and laugh at it endlessly. It always opens up and lends itself to new life. Those are the best things of this century. I think they all give you a philosophy of how to look at things differently. You can apply it to anything: to music; to the way that you construct; titles. We can use and choose the ones that we want at any given time. We're not religious.

You mean you're not dogmatic?

Gane: I don't think that any increase in knowledge can be dogmatic. I think that dogmatism comes from a reduction in the amount of influences.

Sadier: I completely agree. There are certain things that may broaden your view or your self-knowledge, or curiosity: situationism, surrealism, Marxism, art. Sometimes they have been abused. Breton was apparently a horrific bastard who sacked [dramatic theorist] Antonin Artaud for being too much himself. But theoretically, they are about knowing more, and being inquisitive and discovering the undiscoverable.

Maybe the danger is subscribing to only one idea. You get more when you can put ideas together.

Gane: I think new discoveries and new ideas and concepts come from the juxtaposition of existing concepts and ideas -- like mathematical formulas and chemical formulas. That's where my interest lays, in discovering possibilities, not in trying to invent something. The act of chance creates endless possibilities.

In terms of our music, it's sometimes based around these ideas, sometimes not. Often it's totally intuitive. It's where these influences begin to work on the intuitive level where you're not actually thinking about it in an academic sense or in a constructional sense, you're just reacting or creating something on the level of instant recognition.

Musically, is that how you come up with something that is more than the sum of your influences?

Gane: I think that you have to have something about you that is unique. Personally, what set us apart, at least in the beginning, was that there was a certain concept to the group, a philosophy or even an ideology about what we were doing and why we were doing it.

What was that? Can you encapsulate it?

Gane: To be unique was more important than to be good.

Has that original idea changed?

Sadier: No, we've just reached our goal a bit more.

Gane: Things evolve or die away -- reach a kind of stasis --
and we don't use them anymore. My main thing is to avoid any
kind of simple generalization or understanding -- to avoid
categorization. And to be able to accept ideas like
contradiction and confusion as relevant reactions to the
music. That's how I first listened to music, by
misunderstanding or not understanding, knowing that I couldn't put my finger on what was attracting me.

That's two ways, but are there others?

Gane: The act of creation is more important than the final thing. The final thing is something that you present, but you can only learn or feel what is enjoyable from the act of doing it on the spot.

There are two things I love about seeing Stereolab live. One of them is really small -- it's that as a touring band, you set up all of your own instruments, all of your own gear. It's not as if you magically appear onstage.

Gane: I think it's very important to be grounded in the place that you're about to play. When I set up, I'm more into a slow process. Before you actually start something, you need a mindless activity. You familiarize yourself with the surroundings.

The other thing is seeing the communication between the band. When I watch you, there's not a band leader that I can watch. I see someone look over at someone else, catch an eye and sort of smile. I can see that you've just hit that
moment. As an audience member, I get to feel like I'm somehow in on it. It's not a show; it's not a unified front against the audience.

Sadier: If it happens onstage, it automatically translates into the audience. That can work for better or for worse. If it's a bad gig, you don't see the smiling.

Gane: But you can see, or I hope you can see, that it's not a contrived act. That live interaction of music is the most interesting thing about music. Which is why when you go and see a guy stand onstage with a sampler it's boring, 'cause
it doesn't have any live interaction of someone creating something in front of you. I think a lot of people like the vampiric experience of watching a band on stage.

While you're there for one or two hours you're basically sucking all of the attention and energy from everyone in the room in one direction, toward the stage. For those two hours, you might as well not exist as an individual or a group because all the direction is one direction.

There are all of these really rare, expensive Stereolab products out there. In light of some of the band's Marxist lyrical allusions and radical politics that I've read about in earlier interviews, do you recognize the
irony of that commodity fetishism?

Sadier: It's not that we're doing this on purpose. We're just putting out records.

Gane: I'm not a Marxist, and I don't have a problem with commodity fetishism. But that isn't the reason why we do it. We do most of them because we don't want to be stuck in the tradition of doing an album once every two or three years. I think music should be exciting.

Sadier: I've actually read very little Marx. But what I do know is that Marx never said, "Don't you go and ever do anything that might sell out there in the world." He never said that. Marxism is about evolution, about progress. We live in such a world today that my commie friends, my Marxist friends, find it an absurdity to even say that they
are left-wing. The left and right don't mean anything anymore. It's an absurdity to say, "Capitalism is bad! Let's get it, let's kill the beast." Capitalism is everywhere. We
live by it. You're better off trying to make a good living, rather than saying, "I'll kill capitalism and I won't sell anything." It's unavoidable. You can't be too hard-headed.

Gane: I understand spending a lot of money on records. I don't have a problem with it. I don't feel sorry for people who buy our records. You don't have to do it.

Sadier: It gives meaning to their lives.

Gane: [Defensively] No, that's not it.

Sadier: And it gives meaning to your life.

Gane: It's great, it's a great feeling.

Are you aware that a lot of people have sex to your music.

A lot of people tell me that they put your record on
...

Sadier: Excellent. I know someone who strips to our records. And someone had a baby. They saw our show in Atlanta and they went back home and got a bit raunchy and had a baby nine months later.

How do you feel about that use of your music? Does it make you happy?

Sadier: Yes. Do I have to say something special? It does, it's great. Can is also good music to make love to.

Gane: I was trying to think how other kinds of music would be weird: Philip Glass or Steve Reich. With us it's good
that it's not the normal Barry White or whatever you usually
hear, bland R&B. I like the fact that the music isn't
utilitarian, it doesn't have any particular purpose. People
find their own.