A well-heeled academic takes a walk on the kinky side. 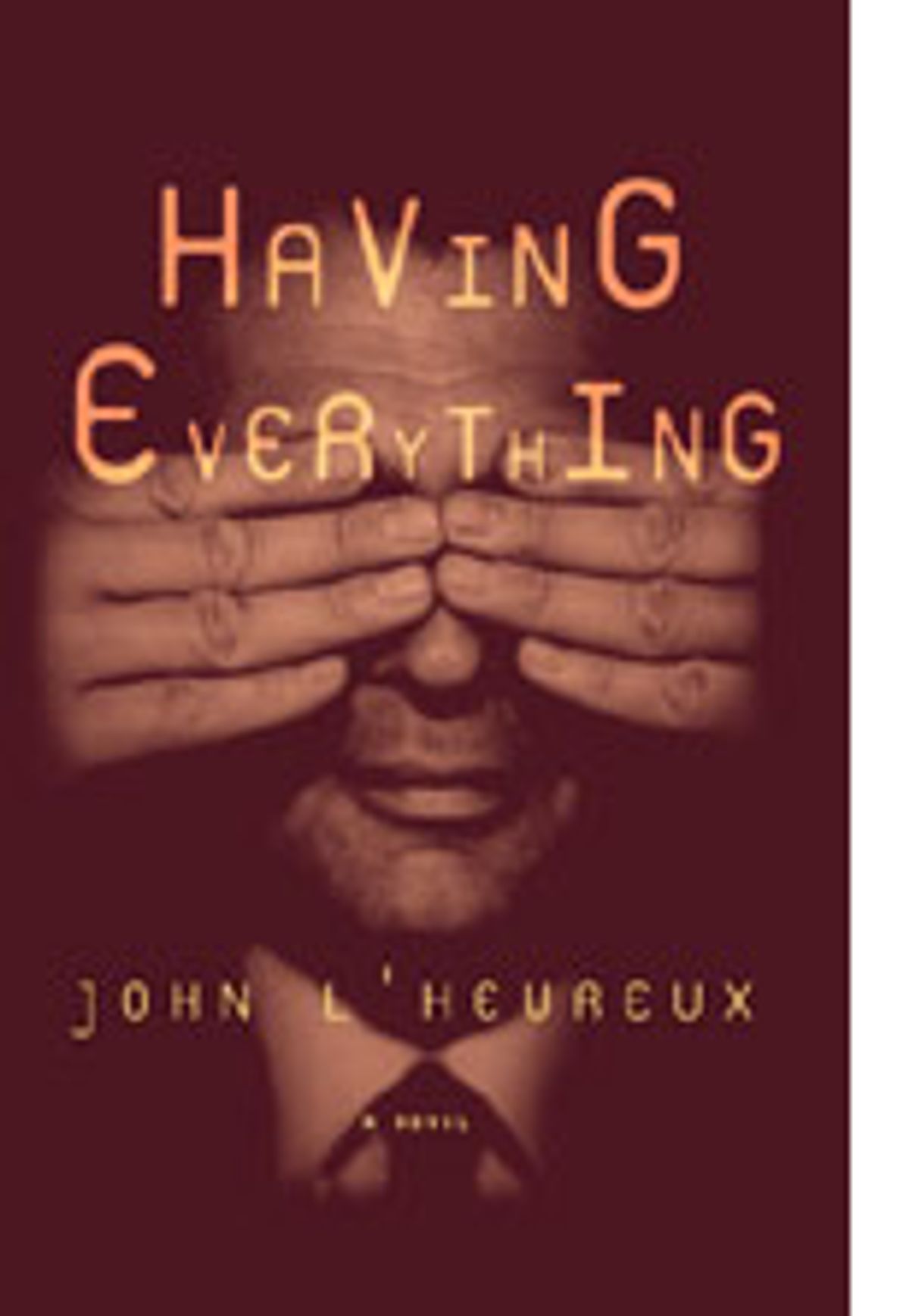 Spare tires appearing from nowhere, sexual desire slowing to a trickle, career advancement coupling with vague feelings of overall dissatisfaction to cause untold misery: Middle age is so exciting, it's little wonder it's such an enticing subject for writers. In "Having Everything," John L'Heureux rakes the territory quietly, gently, as if he were making swirling patterns in one of those Zen desk gardens. As a stylist, he has an elegant touch. His prose is measured and cool and thoughtful; every sentence seems to have been carefully tested before completion to make sure it could comfortably bear the weight it must carry.

That's all well and good, but the approach seems to be at odds with the emotionally tangled story he tells in "Having Everything." As we learn in the first sentence, Philip Tate, a 45-year-old psychiatrist who's just landed a prestigious post at Harvard, does indeed have everything: "a distinguished career, a still-beautiful wife, two healthy kids in top schools -- and now he had the Goldman Chair. Furthermore he was a good man, essentially."

It's an opening loaded with portent, one that fairly cries out, "Messy layers ahead!" And sure enough, we get them. Philip's wife, Maggie, whom he genuinely loves, is deeply unhappy and has slipped into the booze-and-pill habit. Philip has started to exhibit behavior that even he finds confusing -- he suddenly feels compelled to break into the house of one of his colleagues, Hal Kizer (a man with a dark secret that's not so secret: He's into S&M), for no good reason except for the challenge of it. There he encounters -- and becomes strangely fascinated by -- Hal's beautiful, childlike, highly unstable wife, Dixie. From that point on, the couples' lives become a knotty pretzel of deceit, frustration and misguided desire.

At the heart of the novel is Philip's struggle to save his wife, which he's able to do only when he recognizes that she must save herself. L'Heureux cuts to the core of Maggie's prickliness, exposing the vulnerability that underlies her self-destructive behavior, and his great achievement in "Having Everything" is the way he keeps us caring for her, even when her behavior is so frustrating. As the mother of grown children, trying to make a new life for herself by going back to school but finding herself bewildered by the literary-theory hokum she's required to study, she's the most appealing character in the book -- and despite her problems, she's also in many ways the most grounded.

Yet there's something a little too wide-eyed about the way L'Heureux tries to meld the problems of middle age with the seamy underbelly of moneyed academia. Hal Kizer's penchant for being trussed up and messed with in all kinds of ways (he engages a professional dominatrix named Theda for these sessions, which he refers to as "sex seminars") is used as a huge blinking emblem, alerting us to his Shortcomings as a Person. After we get a detailed, clinical, carefully un-eroticized description of one of these episodes, Hal ponders the experience: "As he drove along 93, the stars bright and the night air cool, he put his hand, tenderly, to his crotch. The skin was raw there and felt good. How he loved this: he was exploring the limits of sexual endurance, finding the point beyond which there was nowhere to go." He ponders other
sexual variations (might Philip Tate be attracted to him?) before L'Heureux leaves us with this faintly ominous summation: "Hal pulled into the drive and sat there for a moment, resting. It had been a long day, but a good one."

In many ways, "Having Everything" seems to take place on another planet in another galaxy, far, far away. Philip and Maggie are both in their 40s, and the problem isn't that they're not realistic 40-somethings; it's that they're more like 40-somethings of 10 or even 20 years ago. When they receive a letter from their son in medical school, in which he says that research, not practice, is "his bag," they find a point of connection in their reaction to their son's newfangled expression. "We've got to face it. English is a lost language," Maggie says. These are supposed to be contemporary middle-aged folk, but they seem to have somehow managed to avoid living through the '60s and '70s, by which time words like "bag" were already ancient history -- might they have possibly, even once, joined their contemporaries in smoking a joint? It doesn't seem likely.

"Having Everything" is thoughtful and gracefully written, but it's so prim that it seems to belong to another time altogether. Perhaps the intended message is that the problems of middle age are universal, regardless of the era in which one is forced to face them. But the secret, unintentional message of "Having Everything" seems to be: Don't trust anyone over 30.