A cons-on-the-run caper gets its charm from witty, endearing performances and uncynical affection for its characters. 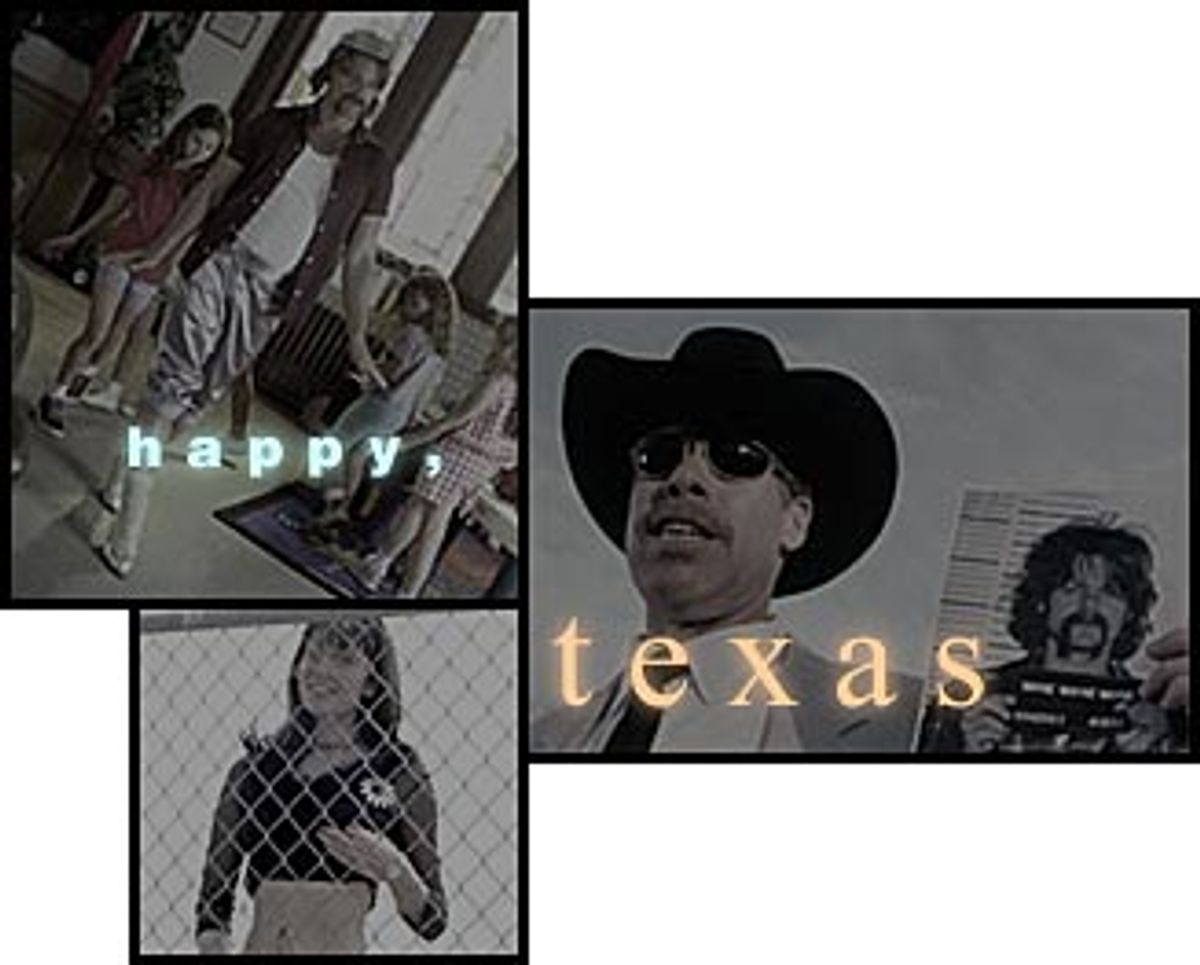 Oh, the ruses convicts have to come up with when they're going undercover. Using a logic specific only to the fantasy world of movies, they invariably hide out in plain sight in the most innocuous personas possible -- however ill-equipped for the roles they may be. It's a cinematic tradition dating back to Humphrey Bogart and Peter Ustinov in "We're No Angels," extending up through Martin Lawrence's faux cop routine in this month's "Blue Streak." But if the world is not exactly aching from a lack of fish-out-of-water criminal capers, "Happy, Texas" nevertheless pleasingly proves that even a shtick we've seen before can charm when it's done well.

We first meet Harry Sawyer ("An Ideal Husband's" Jeremy Northam) and Wayne Wayne Wayne Jr. ( "Out of Sight's" Steve Zahn) scraping armadillos off the highway as they pay off their debts to society on a chain gang. When a fluke accident affords them the means to escape prison, the two heist the first available set of wheels they can get their larcenous hands on and hit the road. What they don't realize is that they've absconded with a Winnebago belonging to a pair of gay beauty pageant consultants, and they're heading right into a hick town that expects them to turn its uncoordinated tykes into tiara-worthy princesses. By the time Harry and Wayne figure out they're the objects of a wide-scale case of mistaken identity, Happy, Texas has already begun to grow on them. It's a nice, anonymous place to lay low with a nice, easy-to-bust-into savings and loan. It even has its share of comely single women -- bank president Jo McLintock (Ally Walker) and schoolmarm Miss Schaefer (Action's Illeana Douglas) -- although the ladies do think Harry and Wayne only have eyes for each other.

With its wacky premise and high-farce execution, "Happy, Texas" is the sort of movie that could easily go embarrassingly wrong. There's little in it that hasn't been seen in one form or another -- the odd-couple pairing of a smooth-talking pretty boy and a disheveled fuck-up, the crooks and cops running amok at the big show, the "Three's Company"-ish straight-guys-pretending-they-aren't device, and the weirdos-in-no-man's-land motif already expertly covered in films like "Raising Arizona" and "Priscilla, Queen of the Desert." And there are more than a few unbelievably convenient plot holes, including the way in which the real pageant guys are written out of complicating the cons' scheme.

But "Happy" is so full of winning performances and so disarmingly uncynical in its affection for its characters, it manages to leave you with a Texas-size grin on your face anyway. Director Mark Illsley (who, with Ed Stone and Phil Reeves, is also a co-writer) takes material that in theory seems entirely been-there-done-that and coaxes something surprisingly fresh out of it, as if he'd started with a plate of leftovers and emerged with a really good meal. As the two cons pretend to be sensitive, showbizzy gay men, they wind up genuinely changing themselves -- and a few of the locals. The film thankfully doesn't backpedal or wink at its gay personas, even though the ruse is played for, and gets, laughs. The joke isn't that these manly, chick-loving felons are suppressing their true natures by posing as sequin-sewing Wayne Newton fans. It's that -- as in older films in which the conceit was drag instead of homosexuality ("Some Like It Hot," "Tootsie") -- by hiding one aspect of their identities, these men uncork the best parts of themselves.

None of this would be nearly as watchable were it not for the considerable grace of the cast. Jeremy Northam, in the more thankless Dean Martin-esque role, spends much of the film in a tepid romantic subplot involving his conflicting feelings about robbing the girl he's falling for. But when he catches the eye of a closeted local and finds himself two-stepping in a gay dance hall, Northam relaxes enough to prove he's loose and witty in his own way. The film, however, is never his. It belongs to Zahn and William H. Macy, playing two very different characters with equally enjoyable, nutty energy. Macy, as Happy's enigmatic local sheriff Chappy Dent, is a rabbit-hunting, bullet-ducking man's man; another character respectfully dubs him "one big-dicked cop." He's not all action and no thought, though -- from the moment he bangs on the window of the Winnebago it's clear the gears in his brain are churning, however unhurried he may be to reveal their direction. And Steve Zahn, who walked away from Sundance with an award for his work in this film, may at last have his breakthrough role. Early on, he's amusing if insufferable, and the viewer wonders if his hyperactive, mad-dog antics are all he's going to deliver. As the story progresses, however, he tempers his scruffy lunacy with a surprising affinity for the little girls he's choreographing and making sparkly costumes for. But Zahn never turns into the kind of yucky softie that so many of Robin Williams' characters eventually do -- Wayne's idea of bonding is to casually offer a child his smokes or to lead a group in a prayer asking the Almighty to put the pageant judges' asses through a meat grinder. Zahn is one of the very few actors around who could make Wayne's evolution sweetly endearing while still keeping its brutally funny edge. The main downside to his character is that he isn't around enough. The film comes alive when Zahn's dancing around the girls; one can't help wishing the comic possibilities of their relationship had been further explored.

"Happy, Texas," like the small town it depicts, is far from idyllic. It creaks in its numerous worn-out places; it suffers from cozy romantic sentiment when a sophisticated sensibility would be far more apt. And yet, like an eccentric little village somewhere just off the map, it nevertheless has an allure. It may look like a place you've passed through a few times before, but it has enough of its own oddball local flavor and colorful characters to make it well worth stopping and staying for a while.