The only offensive dung in New York's controversial art exhibit is the mayor's bullshit. 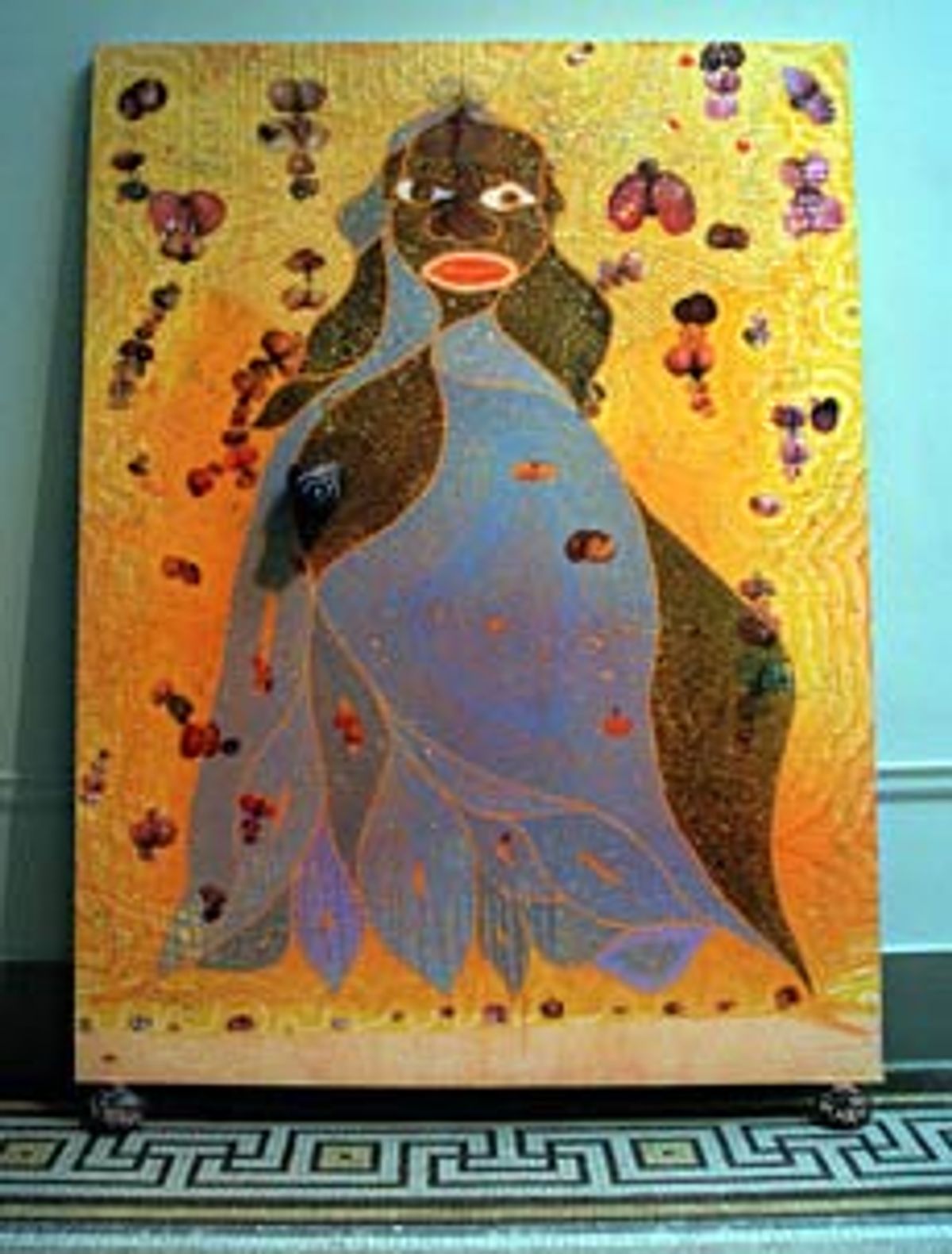 For the last week New York Mayor Rudolph Giuliani has tried to convince us that he is deeply disturbed about the state of contemporary art and in particular the Brooklyn Museum of Art's mounting of "Sensation: Young British Artists from the Saatchi Collection." His credentials as an art critic would be more solid, however, if he had actually taken the trouble to see the exhibit. What set the temperamental mayor off this time was not black Catholic artist Chris Ofili's painting "The Holy Virgin Mary," but rather a photo of the work in the show's catalog. There is, of course, a world of difference between a photo of a painting and the painting itself. But Giuliani is more interested in scoring political points than in carefully considering what he has dismissed as "sick stuff."

Thank God this farce is now in the hands of the courts. As Floyd Abrams, chief legal counsel for the museum, has argued, once the city funds an art institution, any attempt by the mayor to dictate the contents of that institution amounts to censorship. By the way, the "Sensation" catalog clearly states that "the exhibition has received no city, state or federal funding." The museum itself "is supported in part by the City of New York" -- the taxpayers, not the mayor -- "for the maintenance, security and staffing of this City-owned building."

Had Giuliani actually paid a visit to the exhibit's Thursday night preview, he would have seen, in Ofili's "Virgin Mary" painting, a large, exuberantly decorative black Madonna, made sparkling by the addition of map pins, on a fluorescent yellow-orange ground. Its colors, shiny pins, and Mary's benign expression all combine to give the painting a celebratory air. True, cut-out rear views of buttocks with pussies peeping underneath surround the image of Mary -- these are meant to refer to the naked little putti of traditional religious art. Are painted versions of naked cherubic boys less offensive than photographs of parts of mature nude women? Is there only one way to paint a Madonna? And come to think of it, when are we going to see Giuliani's painting of the Virgin, since he said he could do it as well as Ofili?

Oh yes, I forgot the dung. By now we all should know that in Africa, where the dung idea came from, elephant droppings carry none of the horrible connotations that shit carries in New York. Before offending us all with his own bullshit, Giuliani might have troubled himself to learn about the sacred nature of pachyderms and their dung in other parts of the world. Once again, had Giuliani gone to see "Sensation," he would have come across another engaging Ofili canvas called "Afrodizzia." With its multi-hued, rhythmic swirls of paint and shiny pins, "Afrodizzia" features lots of little pictures of black men wearing afros. The painting also contains a number of elephant-dung clumps on which the names of black heroes like Miles Davis, Cassius Clay and Shaft are inscribed. Standing in front of this remarkably affecting, energetic painting, I found it hard to imagine that Ofili is really bashing blacks. According to the mayor's dung-obsessed logic, Ofili is not only a Catholic basher, he's a racist too.

Why all this whining and griping about the sensationalism of "Sensation"? For 500 years artists have been courting hype; it was virtually a Renaissance ideal. Michelangelo, Cellini, Vasari and Caravaggio were some of the greatest self-promoters of all time. To them you can add David, Delacroix, Courbet, Rodin and Picasso. The question is, does the Brooklyn show merit the hype?

"Sensation's" virtue is breadth rather than depth. It brings together the work of some 42 young artists from Britain, many of whom gained attention in the early and mid-'90s. In general, you can put all decent artists into two categories: innovators and extenders. The innovators come up with something new; the extenders refine the work of the innovators. As might be expected from a broad survey, the majority of artists in "Sensation" fall into the extender category. Even some of the most famous among them -- like Damien Hirst, Jake and Dinos Chapman, Tracy Emin and Ron Mueck -- do little more than rehash older American-born styles. Hirst's animal-filled vitrines inevitably recall Jeff Koons' work of the early '80s. Mueck's "Dead Dad," a small silicone and acrylic sculpture of the artist's deceased, naked father, might have shocked American viewers had we not already been treated to similar sculptures by Duane Hanson and Charles Ray.

A frequently mediocre artist, Hirst seems like a thoroughly agreeable person. About 10 years ago, he curated shows that helped put many of the artists included here on the map. Still, getting rid of a few of Hirst's less successful pieces, such as the static and literalist "No Feelings" -- merely a cabinet full of pharmaceutical bottles -- would have opened more space for some of the better artists. Among the innovators, Sam Taylor-Wood is represented by only one, albeit really big, photograph (she had several pieces in the London version of the show). Almost 4 yards long, Taylor-Wood's "Wrecked" depicts a ravishing last supper of present-day partiers, with a bare-chested woman standing in for Jesus. Interestingly, one of the most compelling and original artists in the show is an abstract painter, who's also one of the show's youngest contributors. Jason Martin, born in 1970, executes his oil-on-aluminum abstractions with a single "brush" stroke. The resulting monochrome paintings combine deep textures with beguiling wave-like optical effects.

For those, like Giuliani, who got hold of a catalog before "Sensation" opened on Saturday, attending the show in person will bring its share of surprises. Representations of Gary Hume's neo-pop paintings look far better than the enormous, overly glossy originals. On the other hand, Jenny Saville's equally large nude-scapes -- landscape-like figurative paintings of fleshy females -- appear in the catalog as rip-offs of Lucien Freud's recent nudes. An injustice, really, because you have to experience first-hand Saville's magnificent paint-handling, her muted tones and spectator-dwarfing scale to appreciate that there is more than mimicry in these canvases. Indeed, Saville gives the extenders a good name.

Rachel Whiteread's chunky sculptures of negative space certainly require in-person viewing. "Ghost" gives form and weight to the space inside a bedroom. "Untitled (One-Hundred Spaces)" fills in the area underneath a hundred chairs with sweet-smelling (ah, the sensations) resin in a variety of colors.

I was also delighted by the wit in Sarah Lucas' conceptual sculptures. Instead of the staid installations of ready-mades that dominate American conceptualism, Lucas turns objects into metaphors. "Au Naturel," her portrait of a man and woman, uses only fruit, a vegetable and a bucket propped on an old mattress to evoke her couple reclining in bed. Definitely check out "Two Fried Eggs and a Kebab" too, though the explanation would be too offensive to publish here.

The best things the young Brits bring to America are wit and humor. You'll find them in Lucas' works, in Hirst's wry titles, in Richard Billingham's quietly disturbing photographs, and certainly in Chris Ofili's excellent paintings. You will not find much lightness or humor in the mayor, who clings to his ignorance like a drowning man to a broomstick.