In another time, the director of "The Minus Man" ran off to Spain, renamed himself "Mario Montejo" and became immersed in the snakelike dance called flamenco. 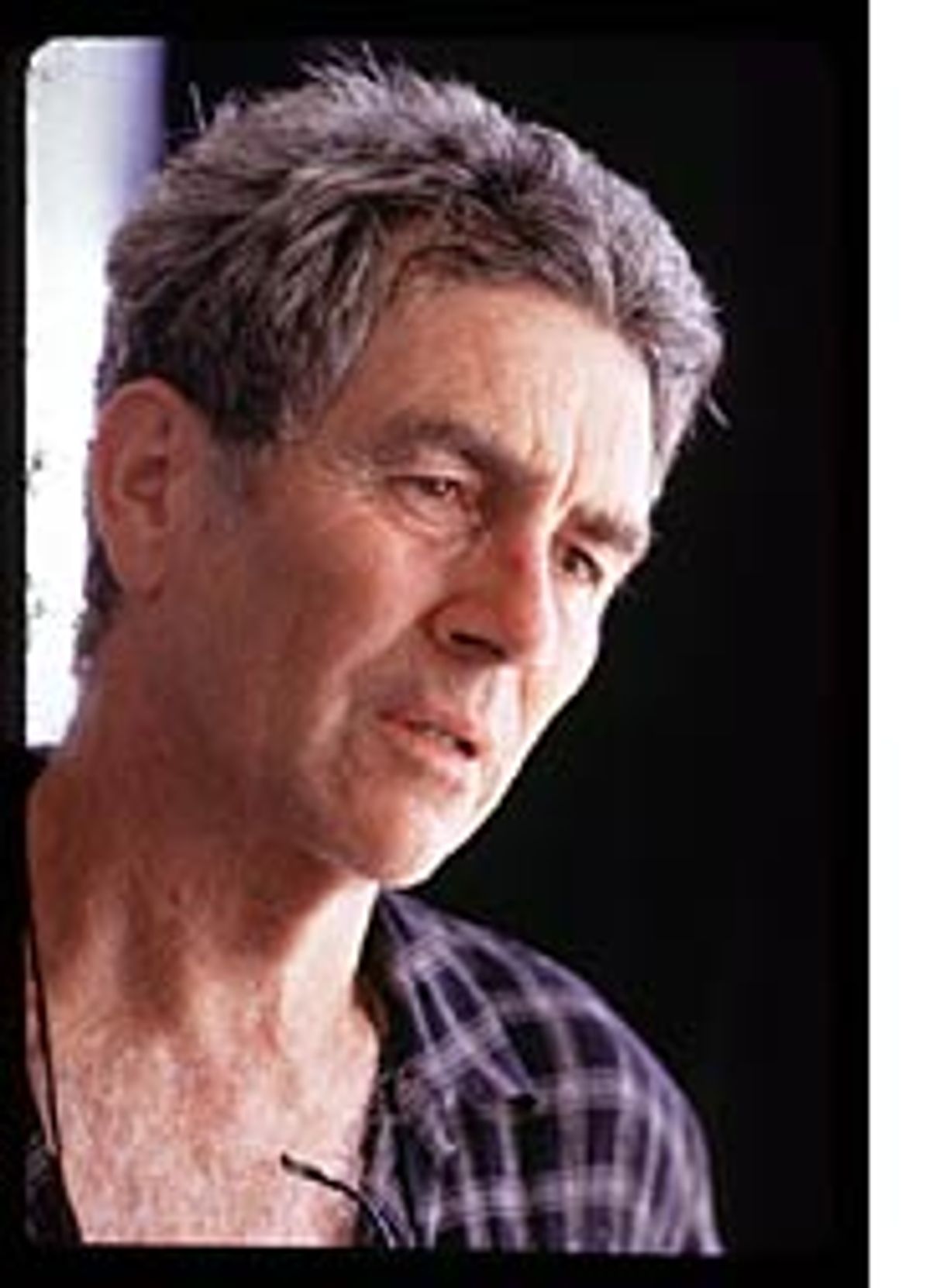 Hampton Fancher's career spans 40 years and includes credits as an actor,
screenwriter, producer and, most recently, director of "The Minus Man."
It's an eclectic mix, from appearances on "Gunsmoke" to screenwriter for the
futuristic noir classic "Blade Runner." Fancher spoke to Salon People about his passion for flamenco dancing, which led him to board a freighter bound for Spain in the '50s and adopt a new identity.

You mentioned that you first heard flamenco as a kid.

I was fascinated by
dancing, my sister was a dancer, my mother used to be a dancer, though not
flamenco. You know, I didn't have other means of expressing myself. I used
to see movies and try to interpret them. But when I was 10 or 11, I went to
see a really dumb movie, called "Valentino," I think. If I saw it now I'd probably be horrified. In the opening sequence the
guy who played Valentino in the film, Anthony Dexter, was with a Spanish dancer
on a ship. It started out with him doing heel-work on the table with a
guitar. At that moment the duende (the spirit
that inspires flamenco at its most magical moments) entered me. I went crazy. At that
moment I fell, literally, in love. It got me big.

There's a long-standing connection between Hollywood and flamenco, lots
of movies with cameo flamenco scenes.

In 1952 or 1953
MGM made a film called "Sombrero," with Ricardo Montalban and Cyd Charisse,
a musical. I can't find it anywhere. Jose Greco played a bullfighter in it and danced. Nobody
could do a farruca like he could.

Your mother was hip enough to recognize your interest in flamenco. So
at some point you just said, "I'm going to Spain"?

There was not much flamenco in America then. I was already a Spanish
dancer and had a little group. I was, like, 13; I had already quit school
and had older dancers with me. The companies would come. Greco came with
four Gypsies in '52, and that really did it. I went to talk to them and I
got some names. Finally, at 15, I decided to go to Spain. I got a freighter
in Texas and went to Barcelona. I didn't know anybody -- I was a kid.
There was a teacher everybody told me about in Madrid, an old Gypsy guy, Estampio.
Everybody said to study with him, so I went to find him. When I got to Madrid,
I couldn't find him anywhere. I was
wandering around in the old part of Madrid after I'd gotten an address from a
girl who said she was a dancer, and I went there. I went into the vestibule
and there was an old man sitting in a chair wheezing, and I said I was
looking for Estampio. He said, "What do you want with him." I said, "I'm going
to study with him." He said, "But you're an American." I said, "Yeah." He said,
"But Americans can't dance." He said, "I'm Estampio." He was a portero, a
doorman.

There are a lot Americans in Spain involved in flamenco and they all
assumed this Spanish identity at some point, like you did. Was it a
way to get inside?

Uh-huh. In my case I think it was based on fear -- fear of myself. I dyed
my hair black and became Mario Montejo. In America I spoke with an
accent. Nobody called me by my real name until I was probably 28. I
finally said, "Wait a minute -- I'm not Mario, I'm Hampton."

You could probably pass as a Spaniard.

I thought I could -- except I'm 6-4. You know, it was kind of schizzy
for me. I was really very lonely and pretended to be above it all.

The whole attitude thing is still a part of the flamenco scene. To hang
with these Gypsy guys you've got to be in the part, so to speak.

Yeah, that's the romance. It's a dangerous thing on some level for some
people. In "Seven Pillars of Wisdom," T. E. Lawrence says that a person who lives in two cultures at once can go insane.
I sort of identified with that -- not that I was insane. But I was
definitely ...

You were immersed in it ...

It also incarcerated me, you know. I mean, every kid is trying to find
out who he is, and then he learns that he's not who he
thought he was.

When you were in Spain it was in a sort of time warp.

It was 19th century. There were no Europeans, I never heard
English. There were no Americans there except some servicemen and
maybe some salesmen from England. In '54 in all the bodegas there was
always a retiree who was paid to listen to anything off-color
politically -- and you were out of the country. Flamenco was totally
anti-Franco. Look at what the right-wing Spaniards did to [Federico Garcma] Lorca; they
hated flamenco. In cosmopolitan Madrid, flamenco was like hillbilly.

Flamenco has produced this whole bohemian subculture. Did any of that
inform your later work?

You studied in Spain for a couple of years.

I think by the time I was 17, I was back in New York dancing. I
couldn't handle it. I always had a group of about four people and one
guitarist, and I was just too crazy as a kid. I was too angry.

So you were leading your own troupe.

Yeah, but I was too temperamental. I didn't have any patience with what
they couldn't do. I was an asshole.

Do you still listen to flamenco music?

Oh yeah! It's never ceased to do the same thing, just like
it did to me in the '50s.

What is it about this music that really grabs people -- that seems
to be operating beneath the words in the songs?

In Spanish, one single word can have such reverberations in a romantic
or spiritual way. Our language doesn't own that kind of darkness. The
language doesn't quite have the snakebite; there's a duality in Spanish. In
flamenco, if you hear a siguiriya, something goes through the body. It
makes me think that it's something that goes so far back, that unconsciously
you're responding to something primitive. When I see some of the snakelike grace of that Indian
dancing, it's the same thing that's talking to somebody who responds
deeply to flamenco. A lot of people don't respond to it.

Some of my friends call it toothache music.

I know a guy who heard flamenco for the first time at my house. He
was like a dog who heard his master's voice. Americans are afraid of it.
I think probably they're
just guys who are afraid of sex.

What are you listening to?

I've got a lot of old stuff. I've got some live stuff from the
South -- those guys really get me. And I love Paco de Lucia.

There seems to be an ongoing renaissance with flamenco in Spain that
started about the time you were there.

I didn't think it would happen; I thought it was going to die. In the
late '50s, I thought: Too bad for flamenco, the modern world is going to crush
it out of existence. But then it popped up. The flamenco that I was doing
was really born around the turn of the century.

Was your ambition ever to just stay in Spain and be a dancer?

I think I was too young. I was so young emotionally. By the time I
got to L.A., I was involved in other things. I thought, I want to write, I
want to direct, act.

Does the flamenco experience inform what you're doing now?

I imagine so, because the same thing that attracted me to flamenco is
something inside me that finds expression in other ways, and it's a darkness.
It's something that's open-ended, it's not so pat -- you know, three acts and
here's the hero. I think there's a wildness that attracts me, that is
flamenco-like. There's a speech that Lorca gave in Cuba, that is the best
definition of what this is all about. It was an essay on duende, before he came to New
York.

Getting back to the present, have you ever thought about doing a film involving flamenco?

Yeah, I'm doing it. I can't write it right now, so we've been looking
for a writer who would understand what the story is, and I would like to
direct it. It's about an American, a businessman who thinks he's going on a
vacation. He's in a traffic jam on his way
to East Hampton, and he hears Paco de Lucia, or something. So he goes to
study for a week, and he goes down the vortex and winds up in Jerez de la
Frontera and gets fucked up.

Does he have to get fucked up?

Well, it's flamenco -- and he gets waylaid. We're working on it right now.

Jon B. Rhine is a writer living in San Francisco. He has written for Time, Newsweek and the San Francisco Chronicle, among other publications.

MORE FROM Jon B. Rhine