Frankly, it's a bore

A humorless look at the class clown of architecture. 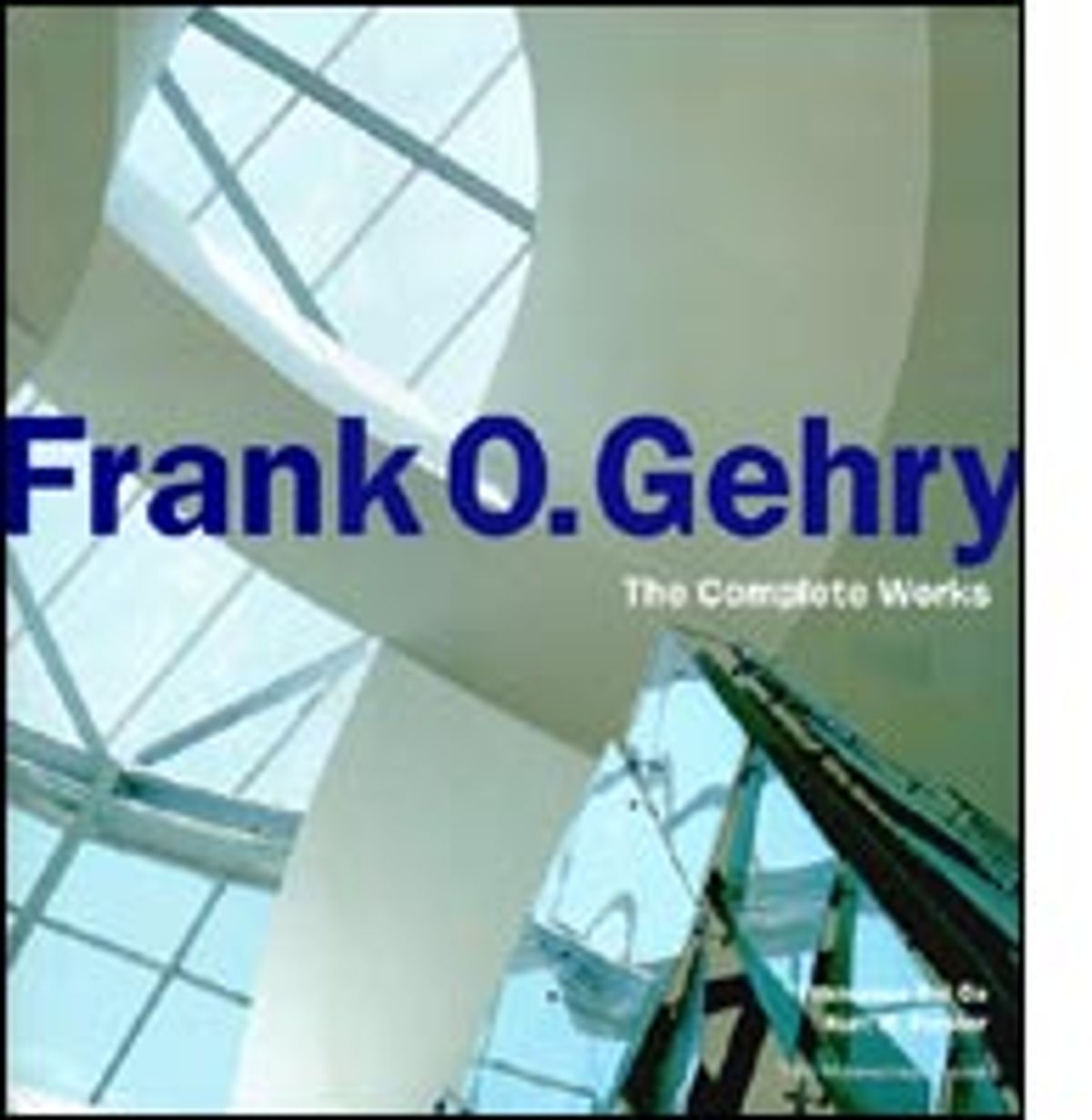 Ten inches wide, 11 and a half inches long, more than 2 inches thick and heavier than some coffee tables, "Frank O. Gehry: The Complete Works" is quite literally a huge disappointment. Written and compiled by Francesco Dal Co and Kurt W. Forster, the book is the only comprehensive volume of the master architect's work to date. That fact alone makes it well worth owning (assuming you can swing the $85 list price). But don't expect it to be fun.

Gehry is the class clown of architects, solving every problem with light and whimsy. He is known for his wildly imaginative scribbles and his use of humor in an otherwise humorless medium. Too bad the same can't be said about Forster, Dal Co or even the book's designer. The tome's design makes it immediately apparent that this is a serious book about a serious architect, and its tag-team introductions -- "Architectural Choreography" by art and architecture historian Forster and "The World Turned Upside-Down: The Tortoise Flies and the Hare Threatens the Lion" by architecture historian and critic Dal Co -- drive the point home.

Forster's essay suffers from the same illness as most art and architecture criticism: The subject of the essay is over-intellectualized to the point of draining the very life out of it. The language is so lecture-worthy you expect to see a test at the end of the chapter. Lengthy passages about other architects, artists, composers and choreographers are painfully egg-headed and tangential, and are not sufficiently reattached to any thesis about Gehry. And a nice observation like "If we play out in our minds the dynamic rapport among the elements of a building and conceive of its volumes as having been arrested in a moment of motion, we come close to imagining the state into which Frank Gehry has propelled his architecture" drowns in a sea of snorers like "In order to lead a life that stemmed as much from his mother's lineage as from the Goldbergs', Gehry was attracted to a woman who was struggling to emerge from a colonial condition. The simultaneity of their efforts to decolonize themselves -- to break through their respective shells of Judaic masculinity and the double indemnity of colonial and Catholic femininity -- and to create a house that would be both actually and metaphorically autobiographical must be reckoned a singularly felicitous event."

The prize for most obscure word goes to Francesco Dal Co for his use of "parallelepipeds" in a sentence. It's an architectural term meaning "a solid with six faces, each of which is a parallelogram" (and yes, I did have to look it up). Part of the problem with both essays is that they assume the reader is well-versed in the history of architecture. Grand allusions abound, with little or no explanation. This is unfortunate. Gehry's growing fame and popularity make this a very saleable book, with an ever-expanding, but still relatively green, audience interested in the field. Witold Rybczynski, in the Times Literary Supplement, aptly described Gehry as "that rare case of a serious architect who is also a crowd-pleaser." But anyone with only a casual interest in architecture, thinking (rightly) that Gehry might be a good place to start, will likely be put off by the text of this book. Dal Co's essay is less mind-numbingly dull than Forster's, once he actually starts talking about Frank Gehry. But you have to wade through two and a half pages of his thesis before the first mention of Gehry's name.

The photos, plans and sketches are, of course, the actual reason one buys such a document, and in this respect the book is serviceable. The quality of a few of the photos is disappointing. The only impressive photo of the Guggenheim appears at near-thumbnail size, buried in the introduction. The scribbles are robbed of their spontaneous flavor by being forced onto the rigid grid upon which the book is designed. But what it lacks in those respects it more than makes up for by the inclusion of many never-completed projects in the form of plans and/or photos of the models. Hadley Arnold does an excellent job with the building descriptions, which manage to be clear and concise while also affording a substantial amount of descriptive language, background info and geographical context. Sadly, Arnold doesn't get credit on the cover.

Forster opens the book with the odd observation that "The architecture of Frank Gehry looms on the horizon like a huge boulder in an otherwise carefully cultivated landscape." I'd say this book is much like a smoldering meteor crashed down in the middle of the amusement park of Gehry's oeuvre. Surely one day someone will come along and do an updated retrospective of his work, and hopefully they'll actually have some fun doing it. In the meantime, "Frank O. Gehry: The Complete Works" is a big, shiny encyclopedia of the work of a master. The comprehensive photographic tour it affords is as close as many will ever get to much of his work; and a photographic tour is infinitely better than no tour at all. But blow off the tour guides -- they're a real snooze.

Karen Templer is the director of product development and design at Salon. Follow her on Twitter at http://twitter.com/karentempler.