Edmund Morris has conceived the life of Ronald Reagan as a movie. And it's a bomb. 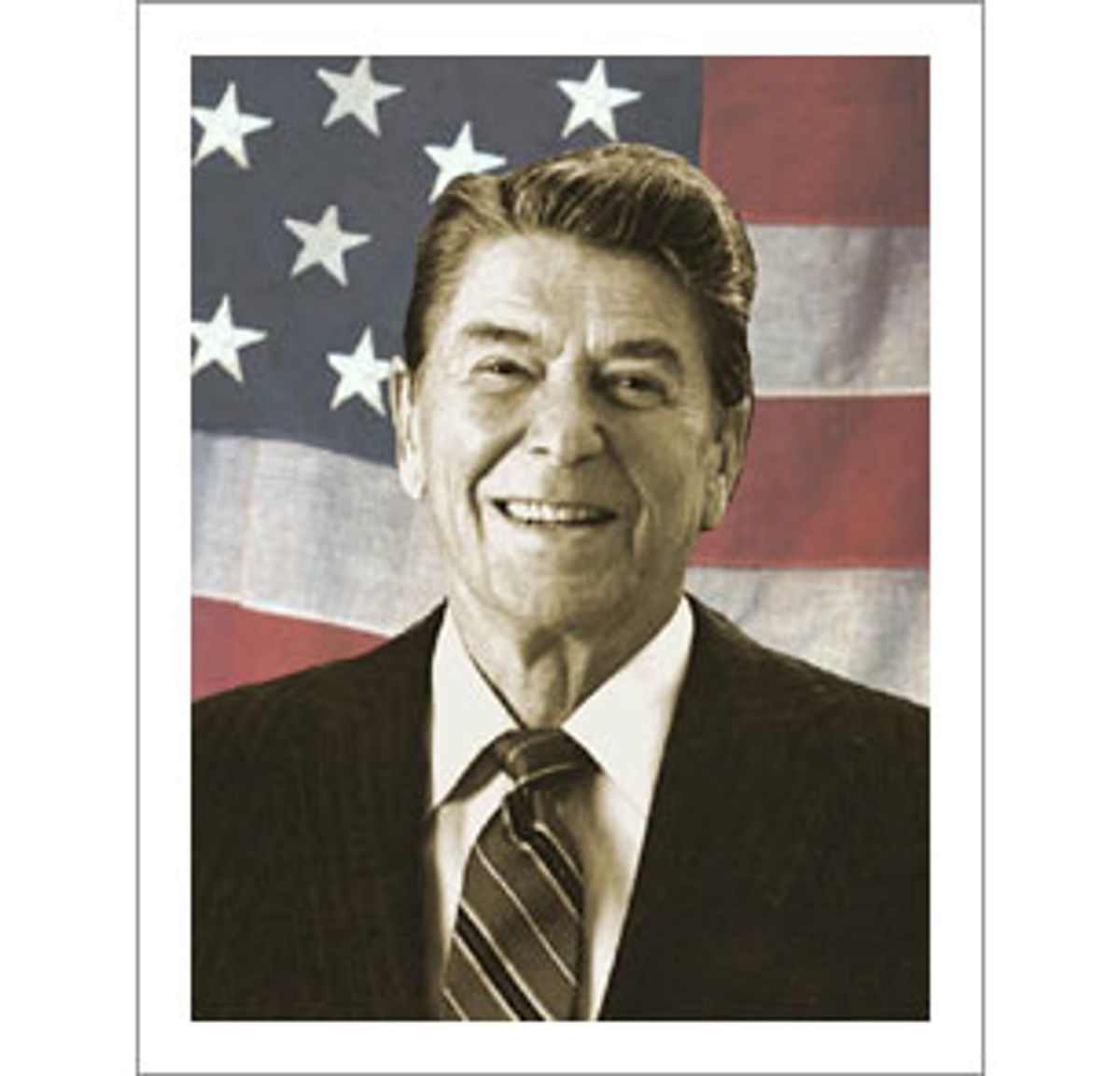 I was sitting at my desk in the anteroom outside the office of Bob Loomis, the famous Random House editor. It was the summer of 1995 -- an unusually hot summer -- and after a 10-year wait, Edmund Morris had finally delivered the opening pages of his biography of Ronald Reagan. "Edmund," I heard Bob cooing into the telephone. "It's brilliant ... Yes, really: absolutely brilliant! I always knew you would pull it off."

I knew how nervous the silence of Edmund's word processor had made my boss over the previous decade. Three million dollars of Random House's money was riding on this project, and because of the unusual wording of his contract, Edmund was entitled to every penny of it even before he delivered a single word. Until a few days earlier, we had had no idea whether he would be able to write anything at all. I waited a few minutes to disguise the obviousness of my eavesdropping; then I entered Bob's office, eager to share in his relief.

"So," I said, "Edmund has finally done something wonderful."

Bob was silent for a moment, staring glumly at the pages stacked in front of him. "No," he replied. "It's unreadable. A clip job punctuated by hallucinations. It's the strangest thing I've ever read. But if he can just keep writing -- and we don't tell anyone else how bad it is -- we can still put an elegant cover on it. And pray that it sells enough to earn back half of his advance."

Except for a couple of facts I've cribbed from the public record, like the amount of Morris' compensation, I have no idea whether anything in the preceding paragraphs is true. It certainly might have happened that way. But I never worked for Loomis, and I never spoke to him about "Dutch," although I did meet him once at a dinner party in the Hamptons. However -- contrary to the spin that Random House has tried to put on his work -- the technique I have employed is actually far more factually based than the "literary device" that Morris invented and Loomis, who really was his editor, inexplicably acquiesced in. For reasons comprehensible only to them, Morris, as nearly everyone knows by now, has repeatedly inserted a fictional version of himself (as well as a fictitious son from the '60s) into the first two-thirds of this endless tome. According to his editor, this method is designed to enhance the author's intimacy with his subject.

But in reality, these invented characters do nothing but confound the reader. They flaunt Morris' narcissism, emphasize his ignorance of the '60s idiom, destroy any semblance of narrative and make it impossible to distinguish between fact and fiction. Apparently Morris encountered writer's block after he realized he had nothing interesting to say about his subject, even though he had been granted unprecedented access to the president and practically all of his closest associates. But his solution -- the creation of a fictitious alter ego whose exploits read like a series of out-of-body experiences -- is only one of many reasons that a reader loses all confidence in the author's judgment. For me, that process began on Page 4, where Morris' summary of Reagan's first-term achievements includes "a transferal of 'compassion' from welfare to the womb."

Morris' point -- and I'm sure he thinks he has one -- seems to be that Reagan lived all of his life as if he were the star of his own movie; so the best way to re-create his life is to make this biography read as much like a movie as possible. Morris quickly makes it clear that he intends to mix fact with fiction in the worst tradition of the most banal television docudramas, then adds excess to insult by periodically writing the book as a movie script -- complete with camera angles and musical cues. (On Page 15, he recommends "the sunrise sequence from Haydn's 'Creation'" to accompany a shot of Reagan's birthplace, or Birthplace -- he capitalizes it, bizarrely.)

The Random House publicity machine is always careful to refer to Morris as a scholar, but the jacket copy reminds us that his first occupation was as an advertising copywriter, a fact that surely explains why so much of this queer book reads like an advertisement for himself. Part of Morris' scholarly stance is his boast, stated repeatedly on television during the past two weeks, that "every fact" is footnoted. But in reality dozens of them aren't; as a result, many of his "factual assertions" are wild enough to demolish the career of any cub reporter.

In rapid succession, he tells us that in 1965 Lyndon Johnson's decision to send combat troops to Vietnam "marked the end of popular support for the war" (in fact, popular support for the president's policies remained robust until the Tet Offensive, almost three years later); that "a majority" of voters "wanted Richard Nixon" in 1968 (it was a tiny plurality -- 43.4 percent, against 42.7 percent for Hubert Humphrey); that one of the many sins of the Carter administration was the "cancellation of supersonic transports" (an action taken by Congress long before Carter reached Washington); and finally that William Clark was assistant secretary of state in the Reagan administration (he was deputy secretary).

But these mistakes pale next to Morris' larger reportorial failures, especially around well-known Reagan aides like Clark. Thirty-three pages after Morris first introduces him, he finally gets Clark's title right. But then he goes on to describe him in a way that betrays an almost pristine ignorance of the bureaucrat's modus operandi. According to Morris, Clark "made almost an art form of taciturnity" and "neither leaked nor courted personal publicity -- a recipe for image attrition in a town that requires press collusion." In fact, as Lucy Howard and I reported in Newsweek back in 1982, in a feature that unmasked several of America's most practiced media handlers, knowledgeable Washington hands learned almost as soon as Reagan was inaugurated that "you could pick up the phone and ... ask for Judge Clark, and half the time he'd come on the phone. That's unheard of at that high a level in the State Department." Another correspondent told us that "he made himself available to serious reporters covering foreign affairs as often as he could." As a result, in less than a year Clark metamorphosed from an object of derision into the recipient of "cheers fit for a Super Bowl champion," as Joseph Kraft put it in a January 1982 column.

When someone serious finally writes a comprehensive account of the Reagan administration, that author will also rectify what is surely this volume's single most glaring failure: Morris' inability to take any interest in an issue unless it was one Reagan himself was interested in. The greatest medical crisis of Reagan's administration was also the greatest medical crisis in America of the past 50 years: the explosive onset of the AIDS epidemic, which became a public-policy concern in the very first year that Reagan was president. Reagan's inability to confront this issue -- he couldn't even bring himself to utter the word "AIDS" in public until his sixth year in office -- was one of the greatest scandals of his administration. But because Morris lacks any real critical intelligence, he devotes fewer than 500 words to this subject -- in a book that fills 874 pages.

Although Morris isn't much interested in substance, he's obsessed with appearances -- especially Reagan's. Dutch is "young, muscular" and "perfectly spruced in dark pin-striped double-breaster"; he appears "virile and handsome in his dress whites"; he is "a big and remarkably attractive man"; he is "tall, relaxed" and "improbably handsome" and, finally, at the age of 69, as "broad as a surfboard and almost as hard, superbly balanced, glowing with health and handsome enough for a second career in the movies."

There is one thing Morris might still do to try to redeem himself after this debacle. Although he got $3 million from Random House because he had been promised unprecedented access to a sitting president, remarkably little in this book seems to come from his own reporting; most of the volume repeats news reported in previous biographies. For example, Morris implies that one of his biggest scoops is his discovery of Reagan's first fiancie, Margaret Cleaver. Reagan's eyes flashed "blue anger ... when I boasted that I had tracked" her down. "Oh," Reagan says, "you found out about her, huh." But as veteran Reagan watcher Lou Cannon pointed out in the Los Angeles Times, this "scoop" was first reported in Reagan's own 1965 autobiography, "Where's the Rest of Me?" Surely there are some real nuggets in the massive archive Morris presumably accumulated. For the sake of history, he should make his files available to a serious historian, who might some day write a serious book.

Charles Kaiser, a senior fellow in the National Arts Journalism Program at Columbia University, is the author of "1968 In America" and "The Gay Metropolis."