Pig in the Gulag

An ad for the made-for-TV movie "Animal Farm" gives a whole new meaning to the word "Orwellian." 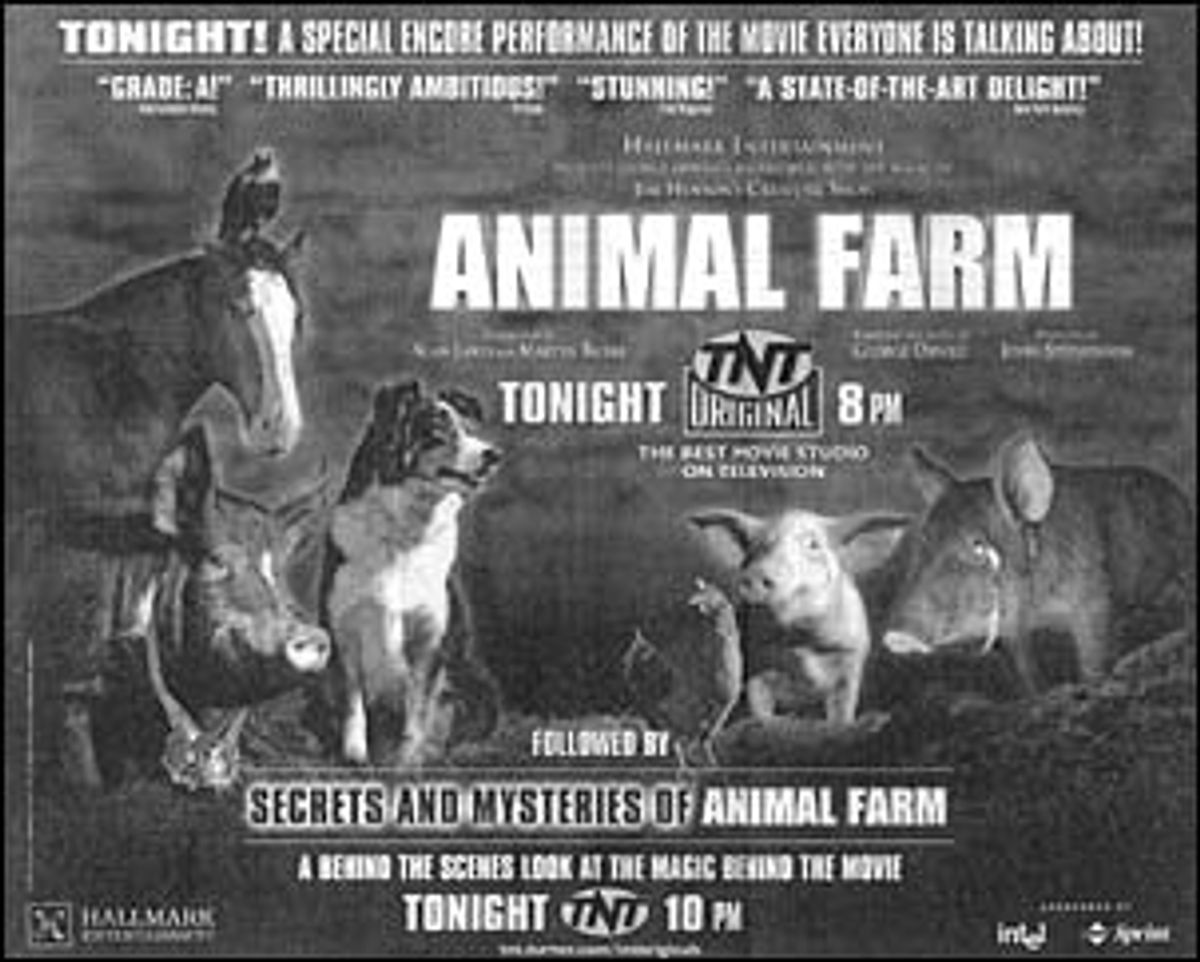 A heartwarming half-page movie ad greeted readers across America as they opened their newspapers to the entertainment section this morning. An adorable group of animals -- a horsie, a doggie, a birdie, a rooster and three adorable piggies, one of whom looks just like that lovable l'il scamp Babe -- pose winningly beneath blurbs proclaiming the movie "Grade: A!" "Thrillingly ambitious!" "Stunning!" and "A state-of-the-art delight!" At the bottom, viewers are exhorted to stay tuned after the show -- presented by Hallmark Entertainment "with the magic of Jim Henson's Creature Shop" -- for "A behind the scenes look at the magic behind the movie."

It's hard to imagine anything that could have turned Eric Blair into a pinko, but this, uh, Orwellian exercise in feel-good marketing would have to be considered a contender.

"Animal Farm," as those of you who didn't cut class the week it was assigned in high school will recall, is a bleak anti-Communist allegory, published in 1945, in which pigs on a farm kick out the humans and install a dictatorship of the pigletariate. The Stalinist leaders of the pigs, assisted by a propaganda chief named Squealer (whose keen insights appear to have assisted with the creation of the ad), massacre their opponents, sell the farm's faithful horse to a butcher and become, in the end, utterly indistinguishable from the whip-wielding humans they rebelled against.

A little dark for the mass demographic? A little bitter, a little highbrow? So you might say -- and you would be right if you did! That's why TNT -- with sponsors Intel and Sprint -- used the magic of advertising to turn scary, ideological "Animal Farm" into a warm 'n' fuzzy special-effects animal show. Call it "Babe: Pig in the Gulag"! (I didn't see the movie, but it's reported to be reasonably true to the book.)

OK, OK, if you look closely at the ad, one of the piggies has a monocle, and another bears two ostentatious medals on ribbons around his neck. But the odds of little Biff and Sallie or their parents recognizing these feeble signifiers as denoting Trotsky or Soviet-hero ornamental kitsch are about as good as those of Fidel Castro entering into a joint-marketing agreement with Cigar Aficionado magazine.

In his classic polemic "Politics and the English Language," Orwell wrote, "The great enemy of clear language is insincerity ... if thought corrupts language, language can also corrupt thought." Orwell's target was debased political language -- calling the deaths of civilians "collateral damage" or the destruction of villages "pacification." But there can also be a debased apolitical language, and this ad is exhibit A. That capitalism can pull an Orwell on Orwell himself, concealing his bitter anti-Communist message beneath a cheery fagade, is a piece of priceless irony that ought to piss somebody off. But who?