As he leaves Southeast Asia, our Vagabonding correspondent reflects on the evolution of the middle-class travel revolution. 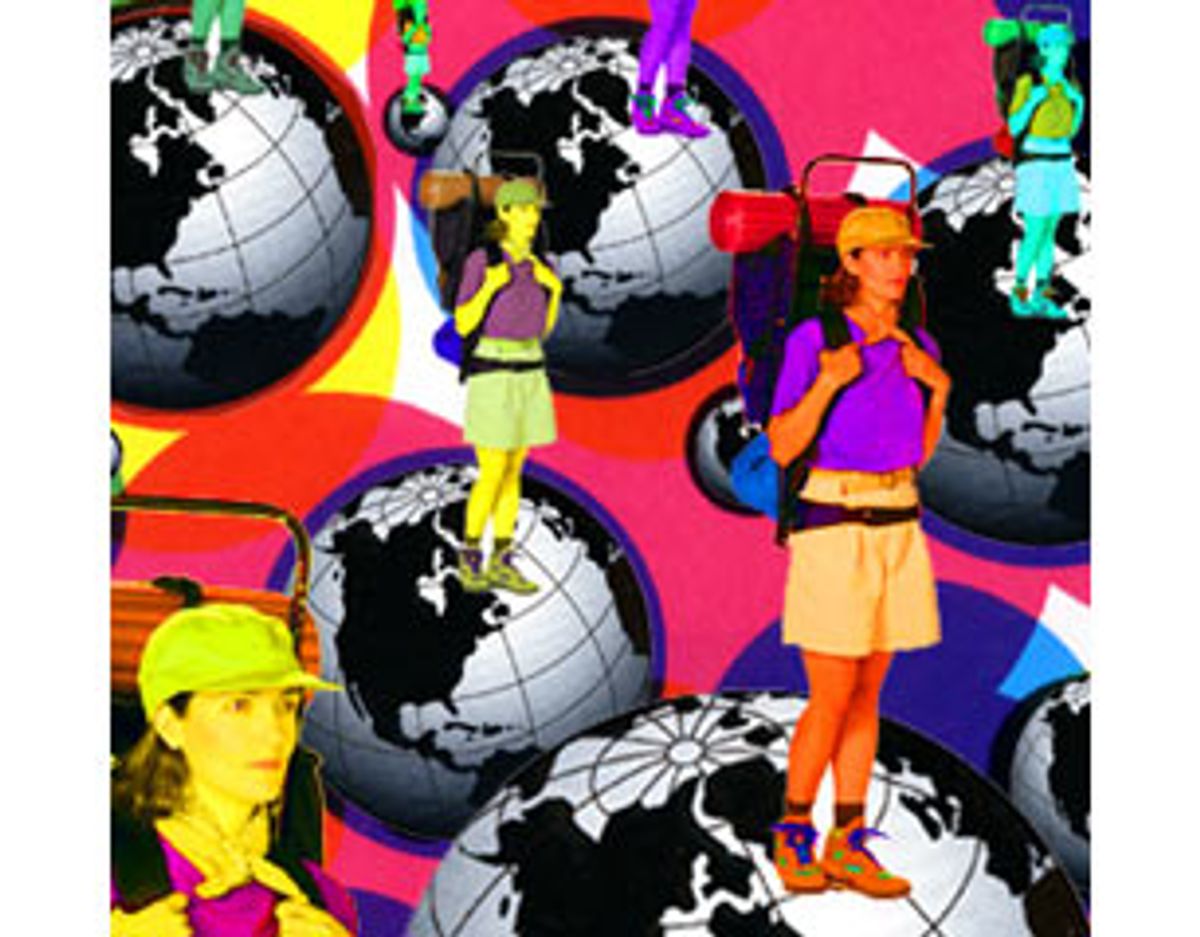 Three hours before I'm due to fly out of Bangkok, I take one last stroll
down the swirl of sights and sounds that is Khao San Road. This is my final
visit to Thailand's famous backpacker ghetto, and -- since I've spent more than
20 nights here since arriving in Southeast Asia last December -- I have
returned to savor this place one last time.

In the alleys, uncertain dogs jog through the shadows, unowned and
omnipresent. Placards advertise tattoo parlors and laundry services,
traditional massages and hemp-fiber clothing. Colorful stickers on travel
agency windows advertise bus and ferry services to Phuket, Ko
Samui, Ko Phi Phi and Chiang Mai. Backpackers crowd into dingy
Internet cafes to check their Hotmail accounts and surf the Web for travel
updates, while suspiciously healthy-looking kids prowl the street with small
cards that read "I want to go to school. Please give me 10 baht." Video
movie noises rumble out from open-front restaurants, blasting that time-honored
Hollywood litany of screams and explosions, of people calling each other
bastards and sons of bitches.

Sometime next spring, a Leonardo DiCaprio movie called "The Beach" will
forever change the way people see this corner of Bangkok. As the hype
surrounding the release of the movie kicks into high gear, reporters from
around the world will descend on Khao San Road to make their own wide-eyed
assessments of this scene. This publicity, along with the movie itself,
will inject a new romantic stereotype into a place that is already
over-romanticized and over-stereotyped.

Everyone who lives or travels in Thailand, it seems, has their own
assessment of what Khao San Road represents. Local Thais, whose opinions
are fueled by a sensationalistic press, consider Khao San Road a place of
drugs and licentiousness, of freaks and cheapskates. Bangkok expats dismiss
Khao San Road as host to a steady rotation of unwashed cretins who call each
other "dude" and sit around comparing tattoos. Upscale tourists avoid the
place as instinctively as they would seedy neighborhoods in their own hometowns.

But perhaps the harshest critics of Khao San Road are the backpack travelers
themselves, who consider the place a watered-down version of
Asia -- a tie-dyed front for conveyor-belt tourism, an insipid gathering
place for pseudo-hippies and hipster wannabes. "The Khao San Road scene is
way too clichi for my taste," I once overheard a young traveler confide to
her friend. They were both sitting in a cafe on Khao San Road at the time.

In reality, Khao San Road is a place that slithers inside its own
stereotype. As Alex Garland wrote in "The Beach," the novel on which the movie is based,
Khao San Road is "a decompression chamber for those about to leave or enter
Thailand; a halfway house between the East and the West." Khao San Road is
not designed to be a static, aesthetic part of Thailand, but a pragmatic
duty-free zone -- a neutral territory that has learned to continually
reinvent itself in the image of what young budget travelers want.

In this way, Khao San Road stands as an apt symbol of a travel revolution
that began a decade ago and has almost been completed.

Most people are probably not aware that this travel revolution is in
progress -- let alone that it's almost over. This is because the revolution
has been carried out by a mocked and maligned entity known as the
middle-class world citizen. Middle-class people, after all, don't have
revolutions; middle-class people have trends.

In his 1988 book "Video Night in Kathmandu," Pico Iyer called tourists "foot
soldiers of the new invasion." At the time, he was referring to the
expansion of Western culture into once-isolated parts of Asia, but his
observation also underscored a simple fact: that Westerners of moderate
means were increasingly able to access and enjoy less expensive parts of the
world. "Anyone with a credit card," Iyer observed, "could become a lay
colonialist."

Not long after Iyer wrote this, the fears and assumptions of the Cold War
were abruptly rubbed out and replaced with a phenomenon dubiously dubbed
the End of History. Suddenly, after 70-odd years of world wars and
cold wars and great depressions, the world's frontiers began to open up in
an unprecedented manner. New travel destinations sprang up in places like
Romania and Namibia and Cambodia. Iyer's tourist "foot soldiers" quietly
began a revolution based upon a single screaming secret: that anyone with a
bit of initiative and a decent guidebook could afford to leave home and seek
out their own variation of paradise.

The problem, of course, was that it didn't take long for these brand-new
paradises to become very crowded places. Moviegoers who watch "The Beach"
will see this notion illustrated in a very vivid manner.

But beyond aesthetics, the middle-class travel revolution wreaked havoc on
our accepted ideas of exclusivity. Traditionally, international leisure
travel had been a luxury of the rich, and independent shoestring travel had
been a counterculture franchise. However -- as more and more 18- to 35-year-olds made their way into the sleepy, inexpensive corners of the world
-- the once-cozy alternative leisure-class became socially crowded. Since
countercultures tend to replace conventional hierarchies with more arbitrary
ones, this resulted in an ill-defined (and sometimes hostile) protective morality that pervades backpacker circles to this day. This also is vividly illustrated in "The Beach."

Currently, much of this puritanical chagrin is focused on a budget-travel
publishing company called Lonely Planet. First written on a kitchen table
in Melbourne more than 25 years ago, Lonely Planet started out as a
photocopied travel newsletter and has since grown into the largest
independent travel publisher in the world. Sometimes referred to as the
"Backpacker's Bible," the Lonely Planet guidebook stresses cultural and
environmental awareness, and has been instrumental in opening up many parts
of the world to penny-pinching wanderers.

The problem many travelers have with Lonely Planet, however, is that the
Backpacker's Bible has won too many fundamentalist converts. Popularity has
resulted in hegemony, hegemony has resulted in backpacker ghettos and
backpacker ghettos make travelers feel like they never left home. As one
of the characters says in Garland's novel, "One of these days I'm going
to find one of those Lonely Planet writers and I'm going to ask him, 'What's
so fucking lonely about Khao San Road?'"

At the heart of this travel puritanism lies a slippery question: What,
in this day and age, is the correct way to travel?

A century or so ago, this question wasn't an issue, since the only people who traveled
were soldiers, sailors, merchants and explorers. Later, when Victorian-Age
prosperity spawned the gentleman and gentlewoman adventurer (the prototype,
however remote, of today's world traveler), this question was still not that
important, since international travel was merely a method of showcasing
one's status to the folks back home.

These days, however -- with world travel turning into one big, grudging
egalitarian democracy -- we are compelled to aspire to a greater ethic in
our wandering. Since as members of a mass culture, we resent being
mere consumers, we have been forced to look for something that goes beyond
social status and financial mobility. Defining how we travel, in effect,
has become a matter of individualist self-perception: It has become
inseparable from how we define ourselves.

Some travelers in Southeast Asia (the party crowd that haunts the islands of
southern Thailand comes to mind) define themselves in terms of fashionable
anonymity and self-gratification. Others, perhaps
taking the budget-travel role too seriously, pride themselves on traveling
with as little money and information as possible, defining themselves
through a minimalist-obscurist sense of one-downsmanship.

The most dynamic demographic within the new travel morality, however,
encompasses the folks who try to abide by the laws of "cultural sensitivity"
-- which stress education over recreation, and interactions over
transactions. Since this is the most visible and self-aware sub-group
within the backpacker milieu, it will certainly bear the most scrutiny when
the independent travel phenomenon enjoys its brief window of movie-related
publicity this spring.

Fortunately for the pundits, there are countless hairs to split when
examining the philosophies behind culturally sensitive travel. This is
because the central conceit of "cultural sensitivity" is that it plays games with
our displacement as travelers -- it shuns the role of tourist by mimicking
the role of insider. And -- considering how it's almost impossible to
separate objective standards of sensitivity from our sentimentalized notions
of how the world should be -- this opens up the proverbial can of worms.

Is the traveler who hikes into the jungle to interact with the natives
having an authentic intercultural experience, or is he negatively
interfering with the natives' lives by flaunting his modern, internationally
mobile lifestyle? Is the traveler's unconditional respect for people's
archaic lifestyles doing them any good if their life expectancy is 47 years,
their infant morality rate is 15 percent and their literacy is nil?

Furthermore, isn't temporary friendship a self-indulgent gesture when the
people the traveler befriends will likely never see him again, and might
have benefited more from a less personal but more tangible contribution to
their economy? Aren't -- by literal standards of cultural sensitivity --
the best travelers actually the herd-like group tourists, who experience the
country from the safety of their air-conditioned buses and don't disrupt
anything that hasn't already been disrupted?

Though such questions make for interesting debates, the attempt to impose a
static model of travel correctness is ultimately self-defeating, since --
rhetorically, at least -- the most culturally sensitive travel option is to
stay home.

Just before I leave for the A2 airport bus stop, Khao San Road gives me one
last surprise. A couple hundred yards down the street from me, crowds of
travelers part to make room as a fife-and-drum corps composed of
tourist-police officers marches its way up the road. Clad in crisp brown
uniforms, knee-high leather boots and shiny motorcycle helmets, the
officers belt out a tuneless dirge, looking as anomalous here as space
aliens. All along the sidewalk, travelers stop to smile at this unexpected
sight, and for an odd moment, this corner of Bangkok seems downright
magical.

In a few more months, the middle-class travel revolution will end as all
middle-class movements do: with assimilation. Once "The Beach" hits the
theaters, the notion of independent world travel will be officially
mainstreamed into the Western psyche -- and the world as we know it will be
conquered for the umpteenth time.

Fortunately, the ramifications of world conquest aren't as spiritually empty
as they might seem. In a personal sense, the world has only grown larger and
wider and wilder. Travel is and always will be an act of faith and
creativity -- even more so as it comes to resemble the lives we lead at
home. And, while the social implications of globetrotting may have become
hopelessly complicated, this merely allows us to reclaim travel for what it
should be: a private act of discovery.

As the crash-helmeted fife-and-drum corps reaches the end of the street and
makes a hard right turn, Khao San Road resumes its dynamic hum. I shoulder
my pack and walk into a world that is more laced with possibility than ever.