My seeds are sprouting in two wombs

Hank Pellissier, giver of sperm, is about to receive. Last heard from while contemplating insemination, he's now got a girl coming with the wife and a boy on the way with the lesbian gal pal. 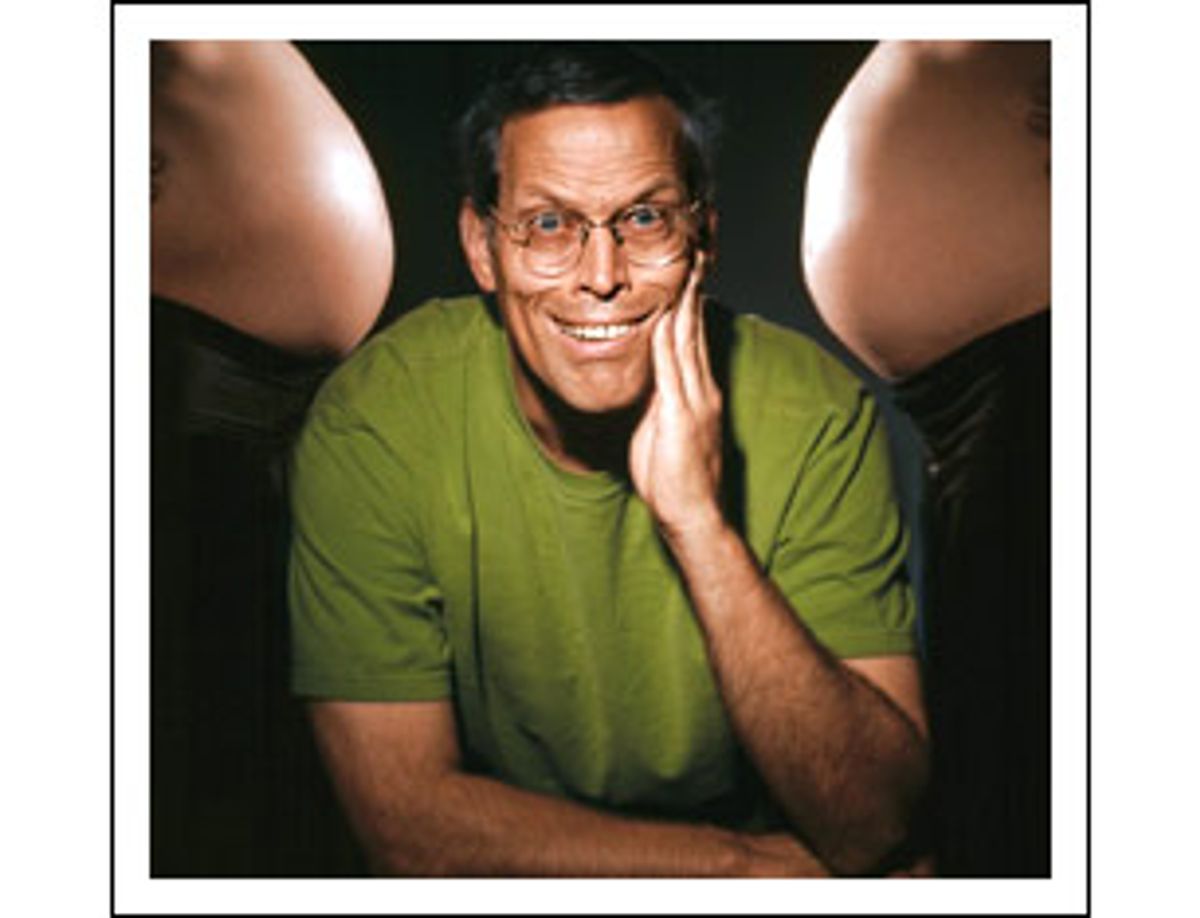 "Hey, Hank," whispers Rachel as she helps me set the table. "I
understand 'phallus energy' now."

Rachel is my quirky, curly haired lesbian friend. My wife Carol and I are
feeding rock cod and tofu to her and her gal-pal Monica tonight.

"It's a potent pleasure," I agree. "But doesn't Monica get to be 'phallic' next? We want YOU pregnant, too, Rachel."

Our tjte-`-tjte is interrupted by our corpulent partners, who enter the
dining room, waddling arm-in-arm. My wife is a tall, blue-eyed WASP, while Rachel is diminutive, raven-haired and Jewish. Tonight they look identical because their T-shirts are both cinched up, exposing big bulbous watermelon-bellies.

"I'm fatter than you," remarks Carol. "But your boobs look bigger."

"What did the doctor say your due-date was?" inquires Monica. "Mine is
January 1st -- a millennium boy-baby."

"December 25th," replies Carol. "Our daughter is the antichrist."

Rachel and I escort our partners toward their chairs. We shove their
portly frames toward their plates; we ladle them enormous quantities of
third-trimester protein.

Sheepishly, I stare at the two happy fertility goddesses who are
sprouting with my seed -- my wife, inseminated by traditional
calisthenics, and Monica, enlarged by semen that I wanked into a
mayonnaise jar.

"A toast!" crows Rachel. "To the tool who made this all possible!"

Carol and Monica hoist their teacups of neonatal brew. Materna tablets are poised on their lips, for swallowing.

"How did you do it?" Rachel wonders. "What super-sperm food were you
eating in March?"

"Cheetos?" I laugh. "Actually, I think we were all more fertile that
month because we were filled with hatred, stress and despair."

Carol and Monica were fighting viciously seven months ago -- they were
angry because their ovulation cycles were parallel for the very first
time. When the procreation plan started, their cycles were two weeks
apart; but a fertility drug ingested by Monica threw her off, directly
into Carol's path.

A bitter struggle for sperm rights erupted on the phone; a screaming, hissing cat fight for dominion of my dollops. Eventually, Carol slammed down the receiver and whirled on me. "I get you first, every day this entire week!" she snarled triumphantly. "You're my husband -- she only gets what's left over."

"Monica's older," I argued. "You're young, and she's 40 -- her eggs are
getting astoundingly more brittle, every day. Besides, I promised my sperm
to her before you were even interested in having a baby -- therefore, she
gets first dibs."

"You're insane!" snarled my headstrong spouse. "Your gunk IS MARRIED TO ME!"

After 15 months of failing to inseminate either of them separately,
my meager reservoir was suddenly supposed to simultaneously satisfy both
thirsty uteri.

Never, ever in my rather degrading life had I ever felt like such a loser.
For 15 months I had tossed my offerings into Monica's jars and Carol's
loins without even a sprout to boast about. I ate icky health food, I
slept immense hours, I exercised strenuously -- but all the glue I grunted
out desultorily refused to bond with their eggs.

My spunk IS alive -- a sperm analysis verified this -- but an emasculating
curse had rendered my intimate maleness absolutely deficient. Perhaps my
sperm was retarded -- wandering lost in fallopian labyrinths. Perhaps
their whipping tails were too puny to paddle up the pubic path. Perhaps
their heads weren't pointy enough to pummel past the crust of the ovum.

To emotionally survive my special burden in March, I began furtively
drinking beer with my "jogging" partner, Paul. I raced out my front door
in warm-up sweats, to delude my wife. Three blocks away, at the Treat
Street Pub, I guzzled ale with my chum, who also was in a procreating
dilemma. Together we commiserated about the anguish of being sub-male.
After an hour of jolly whining, we sprinkled water on our faces to
impersonate sweat and strode home to our respective lairs, to drunkenly
perform our testicular duties.

"That was a great one!" I lied to my wife, as I dramatically faked a
gigantic, multi-spurting orgasm.

"Nope!" I chuckled. "She only gets a teensy-weensy speck."

My volume report regarding the lesbian drop-off was hideously,
embarrassingly true. In my wife, I could bury my pitiful discharges
out of view, but in Monica's glass mayonnaise jar ...

"Where is it?" she asked, polite but ruffled.

"Can't you see it? Right there." I aimed my trembling finger at some
shivering dampness in the corner.

"I'll get it!" grunted Rachel, her syringe poised aggressively. "Don't
worry; it only takes one tadpole!"

Adroitly, she snagged the minuscule smudge as I hurried, crimson-faced,
out of their home.

When my five days of stud service finally ended, I collapsed into an evil,
despairing funk.

"This will never happen," I decided. "It's a fiasco, a joke. I'll never
get Carol pregnant, or Monica, or Rachel" (who wants my semen when
Monica's offspring is 6 months old; that way, their kids can be
half-siblings).

My fantastic queer-friendly family plan seemed only a chimera; an
illusionary dream impossible for a middle-aged man like me.

Three days later, she came home with a pregnancy kit that she had
purchased from a local Thrifty Drug store.

"I'm not splitting the cost of that," I grumbled. "What a waste of money."

Carefully, she urinated on the stick.

"If the lines appear with the same thickness," she said.

Two minutes later, I heard her call out my name in a tremulous tone that
I'd never heard before. I ran to the bathroom. I stared at the technological appliance that promised a miracle. We screamed.

After shedding plenty of impending parent tears together, I remembered my other responsibility.

"This means," I blubbered obtusely, "that I can concentrate on Monica now,
without interference."

Sprinting to the phone, I dialed the gal pals.

"SO ARE WE!!!" shrieked Rachel, in the background. "WE'RE GONNA HAVE A BABY!"

"Hooray for all of us!" yelled Carol, grabbing the phone away from me
for some serious girl talk.

"I'm finished!" I exulted. "No more sex chores! I don't have to ejaculate
again for the rest of my life!"

I felt sorry for Monica when she got morning sickness, because of course I'm responsible. I felt annoyed when I found out that she was still
drinking coffee -- what's she trying to do, abort my son? I felt
frustrated when she said she was "still in denial" -- what's wrong? Is she
embarrassed about the product of our chromosomal union?

Tonight, with the rock cod and tofu, is the first time that Carol and I
have socially mingled with Rachel and Monica since the pregnancies ensued.
Why? Well, one reason is because I'm afraid of appearing too interested.
Or not interested enough. I'm confused, really, about how I feel. I'm
glad, of course, that they're getting what they want. And, usually, I'm just focused on the daughter that Carol is carrying.

But when Monica's boy emerges, I'm worried. I know I'm going to bust loose with some wacky emotions. He's a boy?! Like me?! Will he look like me? Will he act like me? Will I love him? A son? Son? Is he really my son?

Monica and Rachel are embroiled now in a complex legal procedure that will
allow Rachel to sign the birth document as the boy's "father." They need
my signed consent for this, and they'll get it. I'm honest, and I've promised -- no interference. The child is theirs. I won't have any parental rights whatsoever.

"Wouldn't it be fun?" proposes my excellent wife, who always vocalizes the
secrets hidden inside everyone's minds. "Wouldn't it be wonderful if our
children played together all the time, and got to know each other well?
They're related, after all; they'll be half-brother and half-sister."

"We can alternate baby-sitting," suggests Carol. "Or we can watch them
together. We can celebrate their birthdays together. It takes 'community'
to raise happy children, and the four of us together have a natural
bond."

"Let's do it," whispers Monica.

The talk turns now to names. Carol and I are going to call our daughter
Tallulah Elizabeth, but Rachel and Monica are undecided.

"An Old Testament name, because you're both Jewish?" I guess.

No one else laughs.

"Maybe Amos, or Obidiah," suggests Monica. "Or Nehemiah, or Ephraim."

Then again, he is, at least sort of, and hard as I try, I can't stop the horrible and sweet emotions bubbling inside me already about this tiny life -- these tiny lives -- coming into the world.

Hank Pellissier, aka Hank Hyena, is a columnist for Sfgate.com and a frequent contributor to Gettingit.com.