It wasn't funny at the time 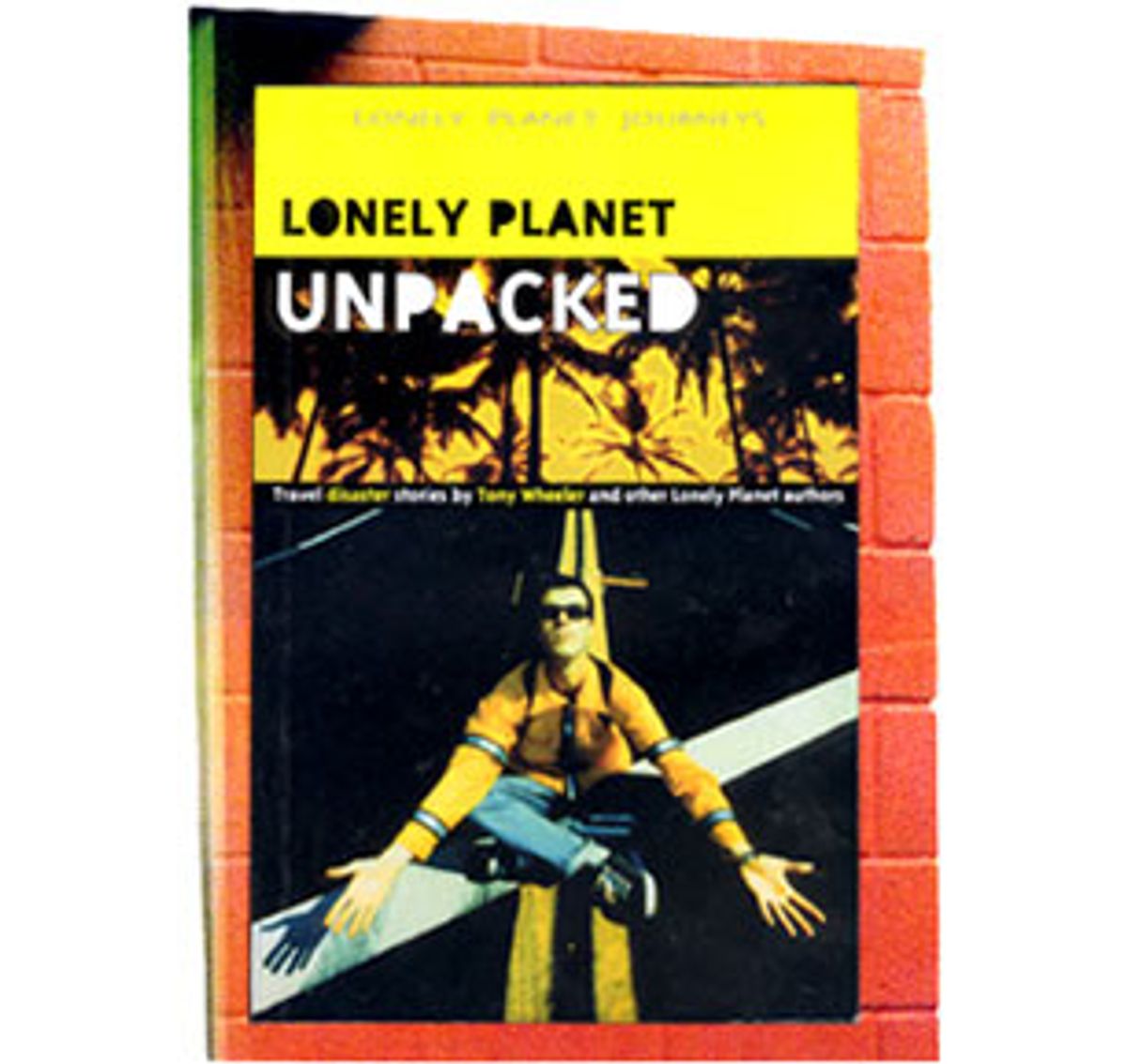 If you ever find yourself in a room full of travelers, one of the most entertaining questions you can ask is, "What's the worst thing that's ever happened to you on the road?" One simple question, and your night is made.

The guidebook writer, of course, is a special subset of the traveler category. And the off-the-beaten-track guidebook writer is an even smaller subset of this subset. If anything, these writers are supposed to be the superheroes of the travel world: faster than a speeding rickshaw, more powerful than a tourist tout, able to sleep in small spaces on a cloth-ball mound.

Real-world Indiana Joneses, they venture where few have gone before in search of the fabled four-toed factoid, the village with no name, the hostel of the all-night cockroaches, the path not yet taken.

What a glamorous life, we think. Their job is to visit some interesting place, stay in its hotels, eat in its restaurants, visit its museums and ruins, check out its hippest cafes and most obscure villages -- all the things we love to do when we travel, anyway. And they get paid to do this. What could be better?

The glamour of this guidebook writer's life is mostly illusion, of course, but it's one of those illusions we cherish and sustain because we need it. We want to believe that, even at this very moment, someone is slashing through sinewy vines to stumble upon a forgotten stone temple, or settling blissfully into a $2-a-night hut on a sandy beach that stretches forever.

But it ain't all mango smoothies and banana pancakes. Ask a few former guidebook writers and you'll soon hear the other side of the story. As Salon staffer Dawn MacKeen, who wrote the Greece section of the original Berkeley Guides book on Europe, wrote last year:

With a $35 daily stipend, I couldn't exactly hire an army to aid me in scouting out the streets, pensions and ruins, so I dipped
into my own pockets to take the twice-as-fast hydrofoils instead of the slow-moving ferries, rented motorbikes instead of relying on the undependable, time-consuming bus system, went on dates with locals to ferret out recommendations from them and arrived alone in the dead of night in strange places (without a room to sleep in) so I could keep up with my editor's schedule. I even went back to work within an hour of crashing on a motor scooter -- despite the fact that I could barely walk. But no matter how
hard I tried, it was never enough ...

Unfortunately, the circumstances I worked under -- the tight deadlines, the superficial method of information gathering, the financial restrictions
-- are almost a guidebook industry standard.

And even if you survive the penurious pocketbooks and drop-dead deadlines, the world has its own way of throwing perverse wrenches into your well-oiled travel engine.

Lonely Planet -- the globe-girdling publisher that has facilitated more than its fair share of guidebook-writer misadventures -- celebrates its road-stained wretches in the hot-off-the-presses "Lonely Planet Unpacked," a collection of tales of delightful disaster written by 26 of the company's veteran contributors, including founder Tony Wheeler.

Some of these travails are merely amped-up versions of the kinds of misadventures that befall many off-the-beaten-track travelers: Like many of us, Tony Wheeler is accosted by a drunk in a rundown Asian town -- except that this drunk seems determined to head-butt Wheeler's car windshield into smithereeens, and then suddenly lashes out with a "viciously large" knife in his hand.

Similarly, Dani Valent gets stranded after rolling her car off the road -- except that her car is in the middle of the blazing Australian outback, on a road where vehicles pass about once a week.

Other adventurers are pick-pocketed, squeezed into suicidal long-distance buses and trains, hobbled by an unexpected fall, grounded by an unanticipated hurricane or rendered stone-drunk by imbibing too much tuak in a village in Borneo -- the very stuff adventure travel is made of.

Some of the tales are less usual: Susan Forsyth is charged by wild elephants on a trip to a little-visited national park in Sri Lanka, and poor Brad Wong, in an image I'm afraid I may never scrub out of my brain, clambers out of his long-distance Chinese bus for a late-night, mid-trip pit stop -- and unwittingly plunges right into the local version of an outdoor latrine. That must have been one long bus ride.

Six of the 26 stories especially grabbed me. In two of the tales, dating from less marketing-sophisticated and more politically suspicious times, the guidebook writer-researchers are mistaken for spies -- one in a secret Siberian diamond-mining town that had just been opened to the outside world, and the other in the untouristed wilds of North Vietnam, in the postwar days before any guidebook existed. Cloak-and-dagger intrigue and some heart-thumping detainments ensue.

In "Lost in Madagascar," Matt Fletcher sets out in search of the country's natural riches -- and ends up getting hopelessly lost on jungle trails that haven't been walked in years. Now that's intrepid!

Another favorite involves Ryan Ver Berkmoes' conscientious foray 300 miles north of the Arctic Circle to the lonely village of Resolute. Before you submit your application to become a Lonely Planet writer, consider this passage: "I decided to go for a hike to the plane wreck I'd seen on the way in. Picking my way along Resolute's rocky landscape, I was pretty sure that 48 hours would be more than sufficient time to gather all the facts I needed. Previous editions of 'Canada' had omitted Resolute, which has a population of under 200, is dark from November to February, has no Places to Eat, no Entertainment, limited Things to See & Do and just two Places to Stay, one of which I had already experienced for too long, and that had been about ten minutes."

Of course, bad weather blows in and Ver Berkmoes' stay is ineluctably lengthened -- with some surprising results.

I also enjoyed Pat Yale's Kenyan tale of a "sprained" wrist that turned out to be broken and a romance that turned out to be similarly misdiagnosed, and Paul Greenway's "The Mongolian Scramble," which opens with this gotta-read-more lead: "As the water rose above my knees, I remembered what I had told my editor when I first began writing for Lonely Planet: 'I will go anywhere.' And here I was, in the back of a jeep, contemplating the unpleasant possibility of drowning in northern Mongolia."

Lonely Planet is not the first publisher to mine this rich lode of disaster tales. Two other similar anthologies that come immediately to mind are "Bad Trips," which was published by Vintage Books in 1991, and "I Should Have Stayed Home," which was brought out in 1994 by RDR Books and includes 50 stories from travel writers (including me).

In fact, the tradition of writing about misfortunes on the road is an ancient, honorable and productive one. In the lists of favorite travel books that I and Salon Travel readers concocted over a series of weeks some months ago, you'll find many accounts of travails; Eric Newby's "A Short Walk in the Hindu Kush" is just one classic example. Indeed, as Tim Cahill recently said in a speech before a room full of travel writers, "Misfortune is the travel writer's best friend."

Cahill's point was that misadventure gives you something juicy to write about. But an equally valid point is that misadventures are an excellent antidote to the kind of hubris travelers sometimes develop. Which is one more reason why I like this anthology.

If you've done much budget traveling, you're probably familiar with the backpacker storytelling marathon, where grizzled veterans of the road gather in a favored cafe or hostel and swap stories, each trying to outdo the one preceding.

"Lonely Planet Unpacked" is like a benign version of that marathon -- it's as if the publisher gathered 26 of its favorite writers in a single smoky room, set a few beers before each of them and said, "All right, lads and lassies, have at it -- what's your favorite on-the-road disaster tale?"

Reading this book, preferably with a cold one or two in front of you, you get that old heady whiff of the road again -- that inescapable sense that the world contains possibilities you can never anticipate, magic and mysteries you'll never understand. Once again, you wonder at all the delightful disasters the world can throw in your path -- and at your own ability to embrace and overcome them, whatever they may be.