"The Story of Us"

This Bruce Willis-Michelle Pfeiffer breakup story doesn't have one. 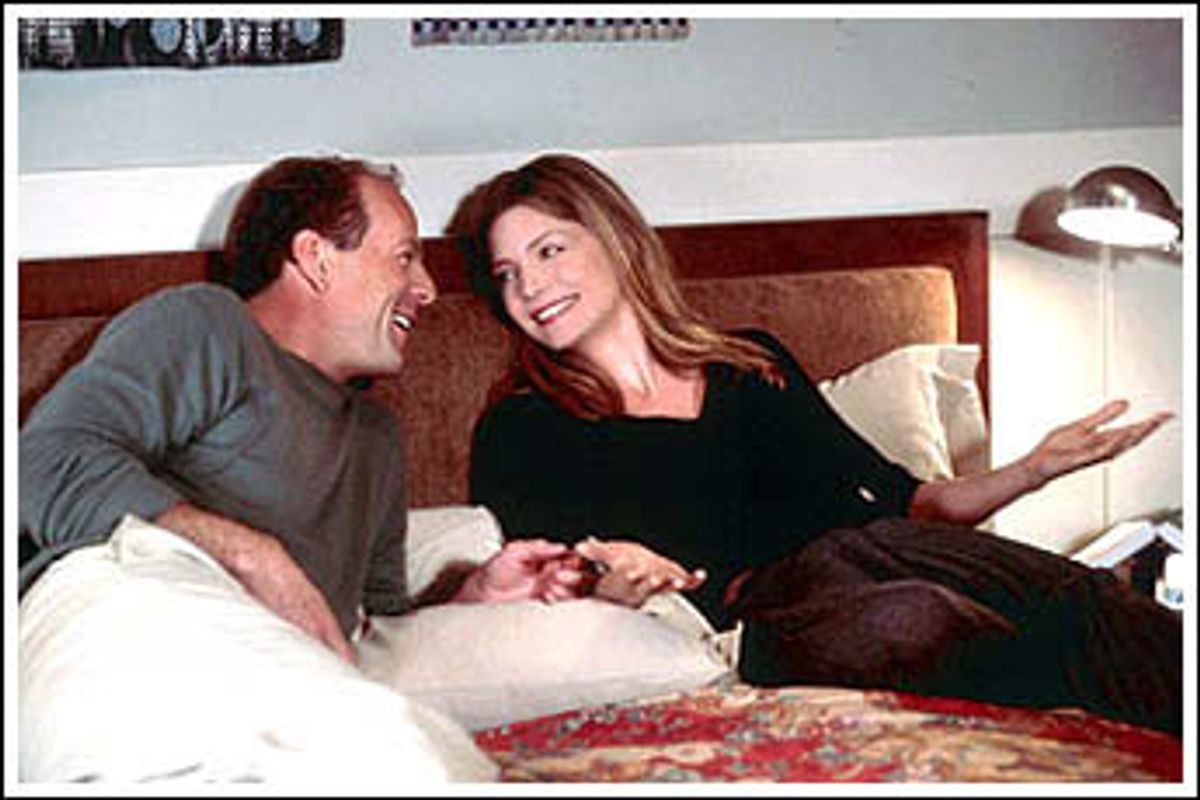 Other people's problems can usually get to you after an hour and 45 minutes. But in Rob Reiner's heartstring-plinking comedy "The Story of Us," you just might lose interest during the first 10.

"The Story of Us" isn't really much of a story at all. A middle-aged couple (Michelle Pfeiffer and Bruce Willis) with two kids have decided that they just don't get along so well anymore. After 15 years of marriage, they attempt a trial separation while their kids are away at summer camp. The right director, the right screenwriters and the right actors could make something out of the bare bones of that story; the disintegration of a marriage isn't by itself a tiresome subject. But as it is, "The Story of Us" is nothing more than a lot of yelling -- boy, does Willis' face get red! -- a lot of facile soul-searching and a lot of worrying about how to tell the kids.

It also has a lot of flashbacks and voice-overs. There are very few places where Reiner has to drive any sort of dramatic narrative, or at least sustain it for very long. Some of the story's action takes place in the present, but there's always a dewy memory, or an acidic one, waiting in the wings to cue us in to how we should feel about this fractured marriage. That just makes "The Story of Us" feel fragmented and contrived, like a badly mapped-out scrapbook.

Reiner trots out the same pseudo-documentary interview motif he used in "When Harry Met Sally." First we get Willis, as Ben, addressing the camera, explaining how he'd always loved those stories about husbands and wives who die within just a few days of each other, the lone survivor unwilling to face life without the other. This speech establishes Ben as the Romantic. Then we get the far more brittle exposition of Michelle Pfeiffer, as Katie. Her pearl of wisdom has been culled from "Harold and the Purple Crayon." She gazes into the camera and says that if one partner is going to be Harold, drawing the world as he wants to see it, the other partner has to be the one who draws it as it really is. She's the Pragmatist in this little charade. Let the games begin!

It's not long before we get a flashback of Ben in funny-looking longish hair circa 1984, and Katie in a bad perm and kooky new-wave clothes. There are heartwarming scenes of Katie and Ben and their two toddler kids (they're around 9 and 11 in the present-day scenes) lolling around in bed, as well as horrible fights with Katie and Ben flinging verbal javelins. There's even a spectacularly overblown flashback montage in which Katie reflects on her marriage, the birth of her kids and numerous instances of fighting and lovemaking, set to Mason Williams' "Classical Gas." Groovy, baby.

The supporting actors make the festivities even more dismal. Rita Wilson, as a loud-mouthed advice-giving pal, spins her lines so shrilly that it's a relief when she leaves the screen. Her husband, played by Reiner, is a big galoot who offers his buddy Ben words of comfort in the form of metaphors. He tries to explain to Ben why his ass doesn't really exist, for instance, but I couldn't for the life of me figure out what it had to do with Ben's problems.

But the greatest disappointment of "The Story of Us" is Pfeiffer and Willis, two terrific actors who barely tread water here. Willis is the more natural of the two. He's such a loose-limbed, affable actor that he manages to clue us in to Ben's suffering (despite screenwriters Alan Zweibel and Jessie Nelson's snappy but hollow dialogue) without overdoing it too much.

But Pfeiffer, in the latest of her human-yet-still-exemplary mommy roles, seems to be encased in some sort of pod. She works hard: In her splashiest moment, where she gets to give her big speech, her eyes well up just so, and the veins in her neck stick out exquisitely. Yet it amounts to so little. In a flashback scene where she and Ben are just about ready to have sex (in the heat of the moment, he's cleared off some space on the kitchen counter), she suddenly realizes she's forgotten to put tooth-fairy money under one of the kids' pillows, an oversight that must be remedied that very moment, lest she forget. The ridiculous contrivance isn't Pfeiffer's fault, of course. But as hard as she tries, she can't rise above the uptight persnicketiness of her character (she concocts crossword puzzles for a living; Ben is a writer).

Pfeiffer is a wonderful actress who can cut like a laser one minute and reduce you to tears the next. Her performances in pictures as varied as "Love Field," "Batman Returns," "The Russia House" and "Married to the Mob" were uniformly sensational. But she seems to be in a holding pattern these days, choosing wholesome roles that siphon the sparks away from her, and her character here is the worst example yet.

Ben and Katie, with their tastefully decorated Arts and Crafts-style house, expensive-looking comfy cashmere sweaters and gleaming family-size motor vehicle, represent the dullest cross-section of today's middle-aged bourgeoisie. Between their horrible "realistic" fighting and their overworked anxieties about how to explain their breakup to their kids, "The Story of Us" plays like some warped hybrid of "Who's Afraid of Virginia Woolf" and "Mrs. Doubtfire."

And even though Reiner does his damnedest to drag us through their pain, joking around all the way, the picture has such a slick veneer of positive energy that you just know they'll get back together. Or maybe we'll get one of those cheerily bittersweet "modern" endings, ` la "You've Got Mail." (Lordy! The Meg Ryan character does lose the farm!) Either way, you're suitably prepared for what happens.

Worst of all is the Eric Clapton song, complete with ultrasensitive finger picking, that surfaces on the soundtrack some five or six (or is it 18?) times during the course of the movie. Clapton's pained, restrained, milky-safe crooning -- we're not talking about the original "Layla" -- is supposed to provide the ideal backdrop for this 40-ish couple's exquisite suburban marital suffering. In all its predictable blandness, it does. The shattering of a romantic relationship ranks among the most painful trials life has to offer -- but it's quite horrible enough as it is, without having Eric Clapton in the peanut gallery.