Forget the G rating -- this road movie is as weird as David Lynch gets. 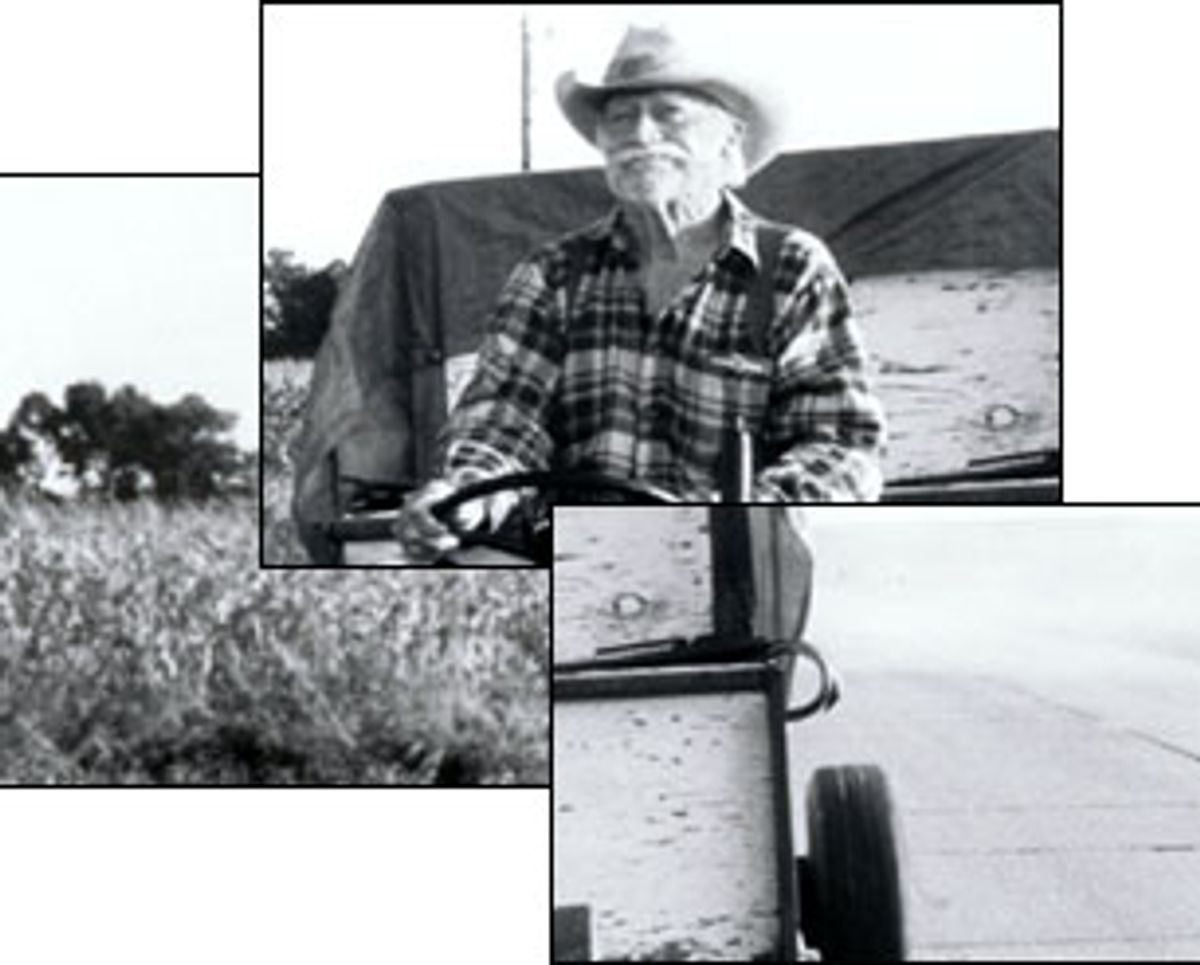 "There's a lot of weird people everywhere now," says a character in David Lynch's "The Straight Story." It's a good joke because for Lynch there's nothing weirder or more wondrous than ordinary people. In "Blue Velvet," when Jeffrey Beaumont exclaimed, "It's a strange world," he was as bedazzled as he was confused. You could practically hear Lynch responding to his hero's observation by saying, "Yeah. Isn't that neat?"

There have been other American filmmakers, Preston Sturges and Jonathan Demme among them, who've recognized the quirks and eccentricities of normal folk. But in "Blue Velvet" and in the best episodes of "Twin Peaks," in the muddled and criminally neglected "Fire Walk With Me" and now in "The Straight Story," no director has been so buzzingly alert to the emotional lives of those people or to the beauty of the world they inhabit as David Lynch. In the phony, condescending "American Beauty," Sam Mendes pretends to look beneath the surface of suburbia and comes up with only clichis about suburbia's stifling conformity, all of it offered up with unconcealed contempt for his characters and setting. David Lynch starts with clichis -- a picture-postcard view of a small American downtown, conversations conducted in "Gee whiz!" or "Well, whaddya know about that!" exclamations -- and comes up with the unarticulated longings, joys and sorrows those clichis struggle to contain.

The talk in a David Lynch movie is often banal; what's being expressed in that talk is often emotionally profound. It's a little like listening to the astronauts in the films NASA took of the moon missions and hearing as they try in their regular-guy way to find a way to express the inexpressible. David Lynch makes movies about the moments when the familiar becomes as thrilling and strange as orbiting the Earth. It's no accident that in the first image of "The Straight Story," we're staring at a nighttime sky impossibly heavy with twinkling stars, while listening to the reassuring chirp of crickets. The image sums up the dual pull of Lynch's work: the simultaneous desire for the comfort of the familiar and the compulsion to find out what else is out there.

"The Straight Story" has its origins in a newspaper item that appeared a few years back. Upon hearing that the brother he hadn't spoken to in 10 years had suffered a stroke, 73-year-old Alvin Straight set off to visit him, traveling more than 300 miles from Iowa to Wisconsin aboard his John Deere lawn mower. It's easy to imagine how that story was probably presented, as the sort of thing that's called a "human interest story" but reduced to an oddity to fill up a newspaper page or round out the 11 o'clock news. Lynch, with his deep love of the odd, must have heard Alvin Straight's story and thought, "Why not?" Alvin, immaculately and beautifully played by Richard Farnsworth, had cataracts that prevented him from driving a car, and he needed two canes to get around. Lynch's movie (dedicated to Alvin, who died in 1996) understands its hero's journey as a proud man's quiet way of retaining the independence he has left.

If "The Straight Story" is the gentlest, most straightforward film Lynch has ever made (that's the dual meaning of the title) it is no less recognizably a David Lynch movie. The advance word on "The Straight Story" has made much of the irony of a G-rated David Lynch movie being released by Disney. The Arts & Leisure section of the Sunday New York Times, always on the lookout for one of those idiot trend pieces editors are so enamored of, decided that the film represents the trend of "major directors with reputations for outri subjects ... making fare to which they can, at last, take their children." The writer, Brendan Lemon, characterized Lynch's work as being about "sadistic, drug-enhanced sex and small-town violence." What a pitifully narrow view of David Lynch's work. At the risk of sounding like a New Age greeting card, I'd say Lynch's movies have always been about the light as much as the darkness. The sex and violence in "Blue Velvet" or "Fire Walk with Me" exist not to refute the welcoming suburban sights, the white picket fences and firemen waving from their trucks and the coffee shops of your dreams, but on equal footing with them. Like Elvis Presley in "Love Me Tender" refusing to choose between the aching plaintiveness of true love and the growling earthly pleasures of sex, Lynch sees a continuum instead of a contradiction. Lynch's characters don't want to escape the idyll of small-town life, but rather to cling to it even as they descend further and further into their own personal infernos.

There are no infernos in "The Straight Story," but right from the opening views of Alvin Straight's Iowa hometown you're in the familiar-made-new land of David Lynch. It could be any of a hundred small Midwestern towns and yet it looks like nothing we've ever seen -- or perhaps nothing we've ever taken the time to see. One of those long, skinny oil tanks with a top like an alien's head hovers over the neatly laid-out houses; dogs on some unspecified canine mission race happily down Main Street; a large woman suns herself in her backyard while lazily gobbling down pink Sno-Balls. We might be looking at still lifes if the images weren't all underlaid with a humming energy.

Everything we see -- the houses, the stores, even the people -- has a middle-American sturdiness. Things don't appear to have changed here for quite some time. And yet there's a fragility to it all, of which Alvin's age is only the most obvious example. In one scene Alvin and his daughter Rose (Sissy Spacek), an impaired middle-aged woman who shares his house, sit happily before their front windows enjoying the lightning of a thunderstorm as if were their favorite TV show. A phone call comes to inform them that Alvin's brother Lyle has had a stroke and while Rose takes the call Lynch keeps his camera on Alvin's face. Without knowing what's happened, he knows it's bad news. Suddenly the storm outside seems emblematic of just how fleeting life's pleasures are. And so the deliberate pace of what unfolds as Alvin makes up his mind to visit his brother reflects not just the pace at which he moves, but his determination to drink in all he can of the world around him. "The Straight Story" is effortlessly in tune with Alvin's belief that every moment of life is a gift.

Lynch has often seemed the natural heir to the lyrical expressionism of silent films. Shooting along the same route that Alvin drove, Lynch and his cinematographer, the great Freddie Francis (who also shot "The Elephant Man"), have made a film in which the vast reaches of landscape and sky, the gold of wheat fields and the green of trees, the brightness of sunlight and the grayness of rain, warmth and cold, the glow of a campfire, are all charged and alive. The elements themselves are characters here, and the blue clarity of Richard Farnsworth's eyes appears to be taking the measure of each, looking at it as Lynch and Francis do, as if what he's seeing is so miraculous he can scarcely believe anyone has seen it before. You come to understand his beatific smile as something like a means of thanksgiving. Watching Alvin enjoy a rainstorm from the safety of a fortuitous shelter is like seeing a Zen version of Agent Dale Cooper of "Twin Peaks" taking pleasure in a cup of coffee and a piece of pie. It's a reminder that to Lynch the ordinary is never ordinary.

It's a measure of the grace of Farnsworth's performance -- and the love Lynch has for the character -- that Alvin is never a figure of fun. With a determination that skirts stubbornness, and a decency that's never fusty, Farnsworth gives Alvin a dignity no less immense for being so casual. Alvin's snowy white hair and the lines in his face seem less the ravages of time than merit badges life has awarded him for getting so far. He's a man completely at ease with himself, and Farnsworth is so far inside Alvin that he runs the risk of people thinking he's not acting at all. But this is the kind of instinctive, lived-in performance that is both the goal and the envy of actors: reaching the place where technique disappears.

In the smaller role of Rose, Sissy Spacek employs none of the showy tricks (Oscar tricks) actors fall back on when playing mentally impaired people -- devices that usually show only how far outside the
character the actor is. Using only a small glottal stop, a hesitation that makes her words -- when
they come out -- tumble over each other, Spacek conveys not Rose's handicap, but the sharpness
that's left, the eagle-eyed concern for her father and the weight of an unspoken sadness.

Like any road movie worth its salt, "The Straight Story" is a story of chance encounters and spur-of-the-moment camaraderie. Lynch has cast unfamiliar faces as the people Alvin meets, and with no past associations, the actors seem fully what they are: Anastasia Webb as a pregnant teenager whom Alvin shelters for the night; Barbara Robertson as a hysterical motorist who keeps running down deer; James Cada as the man who provides Alvin with a place to stay while his mower undergoes repairs, solicitous of not violating his guest's pride; Russ Reed as the bartender who serves Alvin the first beer he's had in years; and, in the film's most wrenching episode, Wiley Harker as the contemporary with whom Alvin shares his memories of serving in World War II. The movie pauses for this sequence, letting the men speak of things still too painful to share with someone who wasn't there. As a depiction of what veterans carry with them, these five minutes of film put nearly everything in "Saving Private Ryan" to shame. And though we've long since accepted that Alvin is a man with a deep appreciation for life, his admission of spending time in the midst of death throws that love of life into relief.

"The Straight Story" is the kind of triumph that most filmmakers as distinctively talented as David Lynch can only dream about: a completely accessible film that's still entirely faithful to its maker's sensibility. This G-rated movie is as wonderfully strange as anything Lynch has done. Lynch follows Alvin into barnyards and graveyards, campgrounds and bars, allowing us to feel we're sharing the journey, basking in the comforts and company to be found along the way. You could say that "The Straight Story" is a song of the open road, or a love poem to what Greil Marcus called "the old weird America." I prefer to think of it as a John Deere letter.