The Hollywoodization of venture capital

The business of funding tech companies has gone gaga for brand names and boffo deals. "Visionaries," though, may be out of luck. 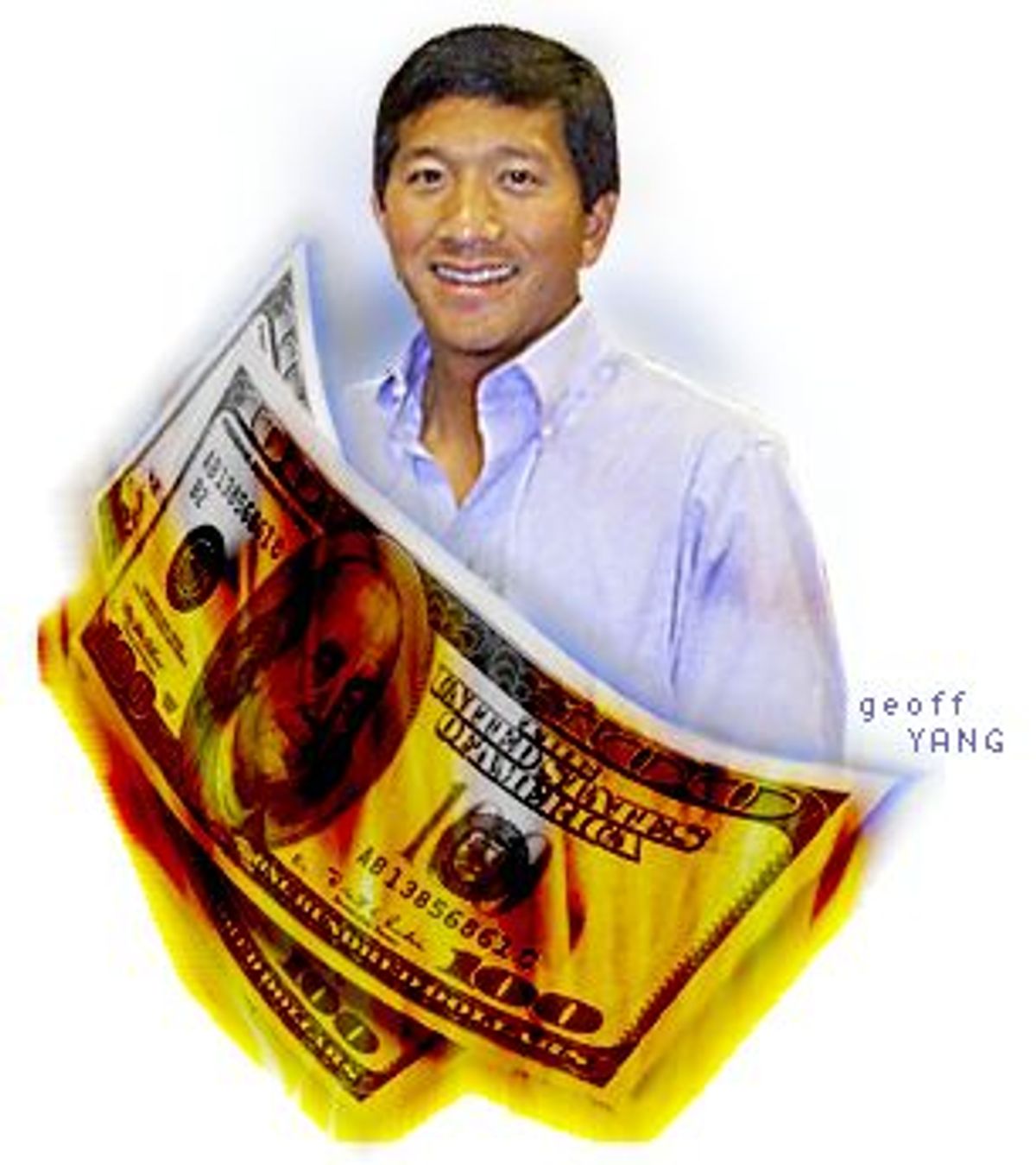 At the entrance to the offices of what used to be Institutional Venture Partners -- until just a couple of months ago, one of the leading venture capital firms in Silicon Valley -- hangs a painting called "The Burn Rate": a giant blow-up of a $1,000 bill, scorched to within a few milliseconds of disintegrating. The reference is to the rate at which a new technology firm "burns" through money. Everybody who walked through the IVP doors would instantly get the point: "Buddy, if we're financing your company, remember that we're throwing money on the fire betting on you."

The fricasseed bill seemed to me to be a strikingly inappropriate symbol for IVP. Just think about the name for a second: Institutional Venture Partners. Frankly, it didn't sound like the name that financial cowboys, used to throwing money on bonfires, would come up with. Institutional Venture Partners sounded like the corporate equivalent of the accountant who corners you at a party to talk about retirement annuities.

This seemed, until recently, like a fair enough picture of venture capital as a whole. Venture capitalists are the people who finance start-up technology ventures. Yet while the start-up entrepreneur is the cowboy of the technology world, the venture capitalists behind the start-ups often projected a calculated blandness. They lived in quiet wooded houses in expensive suburbs. They dressed in polo shirts with the names of their star companies. Their one concession to the gung-ho mentality of start-up life tended to be driving fast cars.

Yet the money in venture capital kept piling up. First more or less quietly, and then, with the coming of the Internet, very, very loudly, investments of $5 million here and $3 million there turned into fortunes of hundreds of millions of dollars almost overnight.

Not long ago, I found myself in the IVP office again. I'd been there several times before, but this time, IVP senior partner Geoff Yang was explaining to me why there would be no more IVP. Yang and two of his partners were joining with three technology financiers from another venture capital firm, Brentwood Venture Capital, to start a new group, at the time code-named "T-Rex." The code name, of course, was something of a calculated swipe at the staid old images that names like Institutional Venture Partners and Brentwood Venture Capital projected. Calculated or not, however, for the venture capitalists, T-Rex was something of a coming out -- an attempt to live up to the spirit of " The Burn Rate," a bid to make venture capital sexy.

In fact, quietly, venture capital had become sexy, though, and T-Rex -- now officially called Redpoint Ventures -- was only the most obvious manifestation of the trend. Sand Hill Road, the strip of California asphalt that is the headquarters of many leading venture capitalists, had turned into Silicon Valley's own little Hollywood.

Once upon a time -- well, maybe about three years ago -- all the money in Silicon Valley was more or less equally green. The way to start a company went something like this: You walked into the office of a venture capitalist with a business plan. The venture capitalist looked it over, said it probably wouldn't work and offered to buy a share of the company for much too little money. Then you went to another venture capital firm, which also offered too little money, but hopefully more than the first firm. Whoever offered the least insulting number got the deal.

That was before money got branded.

One might imagine that a million dollars from Redpoint, or from Kleiner Perkins Caufield & Byers, the oldest venture capital firm on Sand Hill Road, would be worth the same as a million dollars from anyone else. And at one time, that was mostly true, but it's not any more. The increasingly high profile of top venture capitalists means that the buzz that develops around the companies they choose to finance turns into a self-fulfilling prophecy.

Jerry Bruckheimer, the king of Hollywood explodaramas, has a reputation as a producer who can actually get movies made. A Dreamworks movie or a Bruckheimer movie isn't just a movie -- it's an event, a summer extravaganza. So, too, with the companies financed by a few key venture capital firms.

The very hint that Kleiner or Benchmark, one of the most successful new firms, is involved with a company instantly gets Silicon Valley dreaming of the three magic letters: I-P-O. When the company needs more money -- most technology companies go through several rounds of financing -- big funds are willing to throw many millions more in its direction if a brand-name venture capitalist is already in the game. The press is eager to jump on board, too. The result is that for a very few brand-name firms, the summer extravaganza is a lot easier to bring to market. Meanwhile, potential competitors will likely not even be able to rent a theater.

Yang predicts that in the end just three or four firms will dominate technology venture financing.

Says Jeff Brody, one of Yang's five partners in the new Redpoint: "If one of the major firms places a bet in a category, it changes the market. Brand-name investors in a company make
[competing companies] less financeable. The whole game is over before it starts."

Being an "entrepreneur in residence" is perhaps the most coveted position in Silicon Valley. It's the technology equivalent of having a development deal with a major studio. The EIR gets an office on Sand Hill Road, wakes up late, provides some consulting services, and sifts through any business plans in the firm's mailbox that grab his attention. (OK, most venture capitalists don't read business plans that aren't handed to them over breakfast, but you get the point.)

The entrepreneur in residence is a fairly new position that has become increasingly popular with venture capital firms. All venture capitalists complain of the difficulty of finding effective management for the companies they back ("effective management" generally means technology executives the venture capitalist already knows). An entrepreneur in residence is a manager who has started and sold a business, or started and left a business, or worked for years in one of the key Silicon Valley management incubators, like Silicon Graphics, or left a job at Microsoft. Peter Neupert, the chief executive officer of the newly public Drugstore.com, who got his post after a stint as an EIR at Kleiner Perkins, is perhaps the highest-profile recent example.

By taking on an entrepreneur in residence, a venture capital firm more or less guarantees his services in a future start-up. "There's a shortage of people," says Gary Rieschel, managing partner of Softbank Technology Ventures, "so [venture capital firms] try to make sure they don't have to go outside the family."

IV. Thanks for the script; we'll take over from here

The hero of the traditional Silicon Valley story is not the venture capitalist, it's the entrepreneur. The family portraits of the technology world show Steve Jobs in a garage, or Bill Gates in his very early prime, looking too young to be anything but the office boy. In softer moments, venture capitalists refer to the people who start companies not just as entrepreneurs, but as "visionaries." The "visionary" is the irreducible atomic driving force of the technology business.

It's a nice image, but it calls to mind the peculiar position of the Hollywood screenwriter. Screenwriters are extraordinarily well compensated, and no one -- at least not since the old Jack Warner days -- will say publicly that they are dispensable. And yet quite often they are dispensed with.

Venture capitalists in general -- and especially the ones like Khosla, who have themselves been in the position of running a company -- like entrepreneurs. And yet, as a contrast to the venture capitalists' well-meant sentiment, consider the case of a company called Emptor.

Unless you happened to attend a few technology conferences in 1998, it is very unlikely that you would have heard of Emptor. The reason is that the company never quite launched. Started by Andrew Boer, a law school graduate, and Andre Marquis, a newly minted MBA, Emptor was originally conceived as an "escrow" company -- it would guarantee that buyers in online auctions got their goods and sellers got their money.

Late in 1998, Emptor got a big infusion of capital from Kleiner Perkins and Benchmark. The combination of the two key firms lent Emptor as great an air of prestige as a Silicon Valley start-up could have. Perhaps more importantly, the VC firms gave Emptor access to two key clients: EBay, the online auction house, had originally been backed by Benchmark; and Amazon, the Web's answer to Wal-Mart, had been funded by Kleiner Perkins. Both of the giants fell into what venture capitalists, using a Japanese term popularized by Kleiner Perkins' John Doerr, increasingly call the two firms' "keiretsu," or network of associated companies. With Amazon and eBay as Emptor's biggest potential clients, Emptor's founders must have seen taking the money of these prestigious backers as not just tempting, but essential.

The company took on as its chief executive officer Danny Shader, an entrepreneur in residence (it is unusual, but not necessarily unheard of, for two venture capital firms to "share" an EIR). By February all sign of the founders was gone. The name of the company was changed to Accept.com. Hardly anyone even knew who had founded the original company, and hardly anyone bothered to find out. Most Silicon Valley technologists and most of the press assumed, in fact, that the founder was Shader. Meanwhile, Shader took the company's technology and dropped the idea of moving into the escrow business, instead tackling a broader problem of how individuals could take credit card payments over the Net. In April, Amazon.com bought the renamed Accept.com for about $180 million in Amazon stock.

New name, new CEO, new business. Was it still the same company? It's anyone's guess. But it's a saga that resembles nothing so much as the story of one of those shipwrecked Hollywood screenplays that get battered about the studios until finally nothing is left of the original script but one forgettable line.