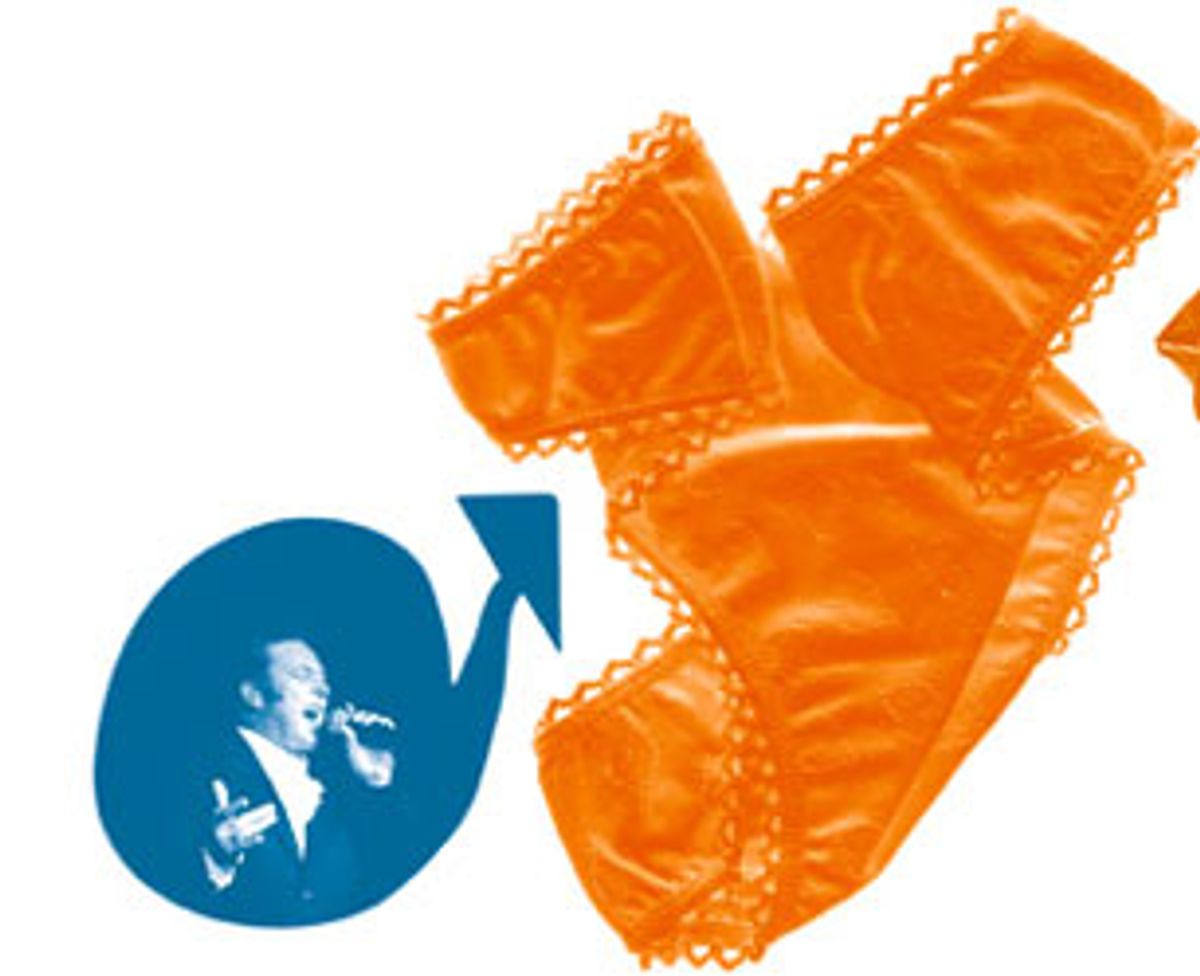 Seeing Tom Jones in concert revealed new dimensions in the semiotics of
panty-throwing. I'd witnessed the ritual only once before, at my first
Cramps show in 1989. Like Jones, the Cramps are a sexual cartoon; they make
black-leather, gender-bending, rockabilly that Betty Boop or Jessica
Rabbit might dance to. That night guitarist Poison Ivy played with bent
legs spread and an Elvis sneer
on her gorgeous lips, while her husband, front man Lux Interior, panted and
hiccuped and howled in a leather G-string and four-inch stilettos, fellating
the microphone, humping the speakers and rubbing his sweat orgiastically into
his chest and crotch. It was a ridiculous, adolescent spectacle, but I was
swept up and turned on, as was everyone else around me.

Many panties were flung without premeditation that night -- but few were
aimed at the stage. Ivy and Lux weren't themselves the objects of desire,
but instead sprayed the crowd with sexual possibility like a bomber plane sending briefs exploding skyward, launching a geyser of airborne briefs. These chicks just wanted out of their underwear, and so they cast their scent wherever it landed. I never doubted that those flung panties were wet, so I assumed that wetness was at least implied in any panty-toss.

But would this be true at a $50 Tom Jones concert at a staid
Washington theater?

I didn't expect spontaneity, but I thought some original meaning of a
tossed panty would survive. Rituals are meant to both stand in for
and re-ignite whatever expression originally inspired them. So even if the
Tom Jones fans brought laundered panties in their handbags, once airborne
they would signify the same thing as the pioneering
pair thrown 35 years ago by some British schoolgirl pushed past her boiling
point by the Welsh pelvis. I assumed that every tossed panty still says: You
and your show, Mr. Jones, get me very excited, and here are the body fluids
to prove it.

But at Jones' concert, the panties appeared while the roadies were still
setting up the stage. A woman about 30 rows back started it off, standing
up at her seat and twirling white bikini briefs to growing cheers. Others
picked it up, and the air above the seats filled with the tiny waving flags
and bawdy whoops and cheers. The sound swelled to a war cry: An army of
ladies who'd left their husbands at home were preparing to storm the stage and
bomb it with their underwear.

I sat between two demographically representative groups. On my left
three 60ish women in bifocals and beauty-shop hairdos cooed and giggled
over the coming attraction; on my right three women in their 30s played it
cooler, making it clear that the panties they'd brought would be tossed ironically.
When asked if Jones was married, my 60ish neighbor answered a little
prissily, "Well if he is, he has a very liberal wife." My 35-year-old
neighbor was the first of many who told me her mother loved Tom
Jones and that ogling him on TV had been a family affair.

The crowd screamed when Jones strode onto the stage in an early-Beatlesque
black suit, but panties weren't brandished again until around the fifth
song. Despite his slight paunch, Jones' full head of hair and
preternaturally tight jaw line (courtesy of a face lift?) made him look quite
well-preserved. Opening with "Turn on Your Love
Light," he kicked immediately into the baby-I-need-your-love histrionics
he's famous for. By the third song, my bifocaled neighbor had
completely dropped her prissiness. "I'd sleep with him," she told her
friends with a new swagger in her voice.

Jones worked the crowd with the Elvis hip rotation, the leg-spread
bunny-hop pelvic thrust, the coat-twirl-and-toss and the slow shirt
unbuttoning to reveal his luxuriant chest hair. Once he began unbuttoning,
women old and not-as-old started running down the aisle to the stage,
flinging underpants at the singer, then running back to their seats. These little forays
continued throughout the night -- each one drawing loud cheers.

During "Delilah," a tall, skinny blond upped the ante by running up to the
stage in leather pants and a black bra and flinging her lacy T-shirt onto
the stage. Some of the older ladies tsked, but most shrieked approval.
It began to feel like a game of Truth or Dare at an overpriced slumber
party. The underwear wasn't even symbolically stained. To make this abundantly clear, many women proffered pairs still bearing sales tags. The screams for each panty-toss were louder than the screams for any of Jones' moves or songs. Suddenly, the underwear seemed less like a message to the singer and more like semaphore signals of naughty girl talk.

About halfway through the first set, however, Jones thrust himself into the
pantalogical discourse, much to the dismay of the stage guards. The entertainer
began to accept panties and hankies from outstretched hands, rub them on
his face and chest and then hand them back. This sent a stampede of women
to the edge of the stage, holding up their lingerie for dampening. The
wipe-and-return move turned my Cramps-based smegma-as-tribute model on its
head. It was Jones' sweat that was the nasty fluid -- not their own.

In a different context it might have seemed that Jones was burying his face in pussy by proxy, but the middle-aged innocence of the crowd made the ritual seem more like the transubstantiation of the communal wafer. The panties didn't inherently contain pleasure; they were just clean fabric until his body fluids made them precious. That's when it struck me that all the running down the aisles was just like Baptists rushing forward to be saved.

Toward the end of the show, the band launched into a brassy "In the Midnight
Hour," and I headed up the aisle, ironic panties in hand, hoping for my
conversion experience. Sadly, my Holy Ghost moment didn't come -- after an hour and
a half of pop-funk and Austin Powers-like dance moves, Tom Jones still seemed
to me like total Vegas cheese product. Even during his encore, when he
might have broken into unleashed libido, his movements seemed all the more
staged. While singing the Prince cover "Kiss," he squeezed his breast and
played with his zipper on the line "I know how to undress me."

No matter how leering Jones' stage business became, it still felt like I was up
there brandishing my unders with a gaggle of virgins. Everybody was
smiling at each other; I saw no discernible lust -- no frenzy, no groupie
come-hither looks directed at anyone onstage, no competitiveness. Whenever
Jones graced a fan with a sweat-mop, her girlfriends hugged her in
congratulations and they hopped together back to their seats, waving their
prize to general cheering.

After the show his avid, multi-generational fans testified to his
ageless animal magnetism. The shirt-thrower said of her striptease, "I was
oblivious of everyone except me and Tom." Yet when asked if they would
sleep with him, the women backed off from their initial bravado. "It's not
like that," they invariably explained, like I had suggested a new
kind of incest, "My mother/grandmother/daughter likes him too." Then they
praised him for staying married to his high school sweetheart all these
years. Tom Jones, having been "sexy" long before many of these
women had sex, has become an artifact of lust like a well-thumbed
Harlequin romance. And the panties they bring to his concerts are like the
fabric squares for a big, bawdy quilting bee.