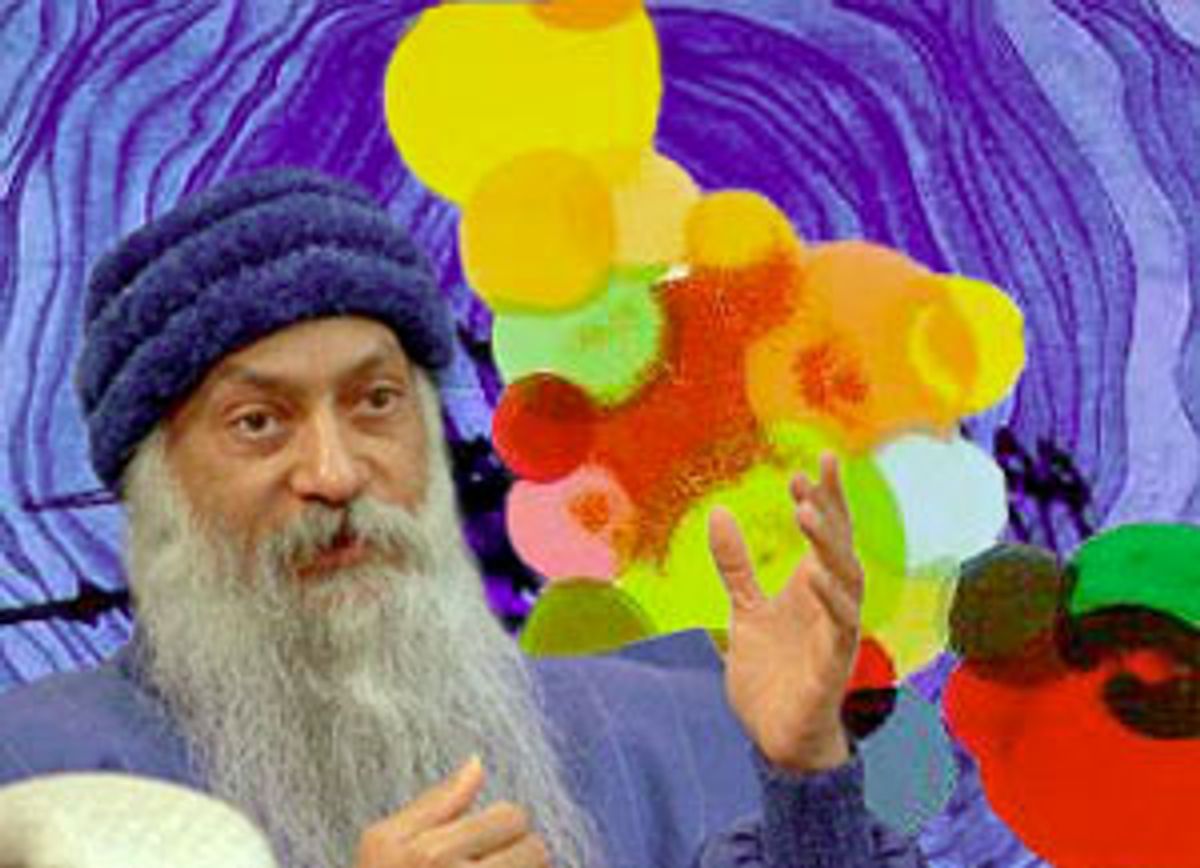 Ever wonder what ever happened to the guy whose religious followers were linked to the only episode of domestic mass bioterrorism in America? Well, in the case of the late, notorious Bhagwan Shree Rajneesh, old renegade sex gurus never die. He just "left his body" somewhere in India in 1990 and later emerged as a thriving, modern-day publishing machine known as Osho.

Rajneesh's flock caught much of his meditative bon mots on tape, and now incessantly recycle these ponderings as spiritual wisdom under the author name of Osho. This Osho has now generated an impressively diversified empire of books, video tapes, television shows, corporate seminars (via Osho "trainees") and even a 34-acre luxury spa in Pune, India. With more than a dozen titles published and still going strong, his worldwide book and audio book sales now surpass $1 million annually. Due out in mid-November from the ever-prolific (albeit, technically dead) Osho: Three new titles from St. Martin's Griffin -- "Creativity," "Courage" and "Maturity," all priced at $11.95 -- to mark the 10th anniversary of his death in January. And in May 2000, a new "autobiography" with the working title "Osho: The Autobiography of the Spiritually Incorrect Mystic."

To date, the published works of Osho have left readers with little clues as to his former identity. So consumers may not know that they're actually plunking down their cash for rehashed ramblings from the late Rajneesh, the controversy-plagued spiritual leader kicked out of the United States after his legal woes heated up in the mid-1980s. Rajneesh made headlines with a lifestyle that included a convoy of more than 90 Rolls-Royces, flashy jewelry and enough hedonistic pursuits to earn him the title "world's most famous sex guru."

Rajneesh and his followers settled on a 65,000-acre ranch near Antelope, Ore., wrestled political control from town office holders and renamed Antelope "Rajneeshpuram." But they were essentially the sect that couldn't shoot straight. During a conflict with Oregon authorities, the followers were accused of arson and attempted murder. In perhaps the most notorious incident, some members of the Rajneesh crew were linked to a 1984 case in which salmonella bacteria was sprinkled on the contents of local restaurant salad bars and sickened 750 people. Rajneesh was deported on immigration fraud charges and died in Pune on Jan. 19, 1990.

However, Rajneesh lives on with an estimated 5,000 of his lectures now marketed as Osho tapes and books. He'll answer e-mail questions on the Web and make the occasional remark on current affairs. (Live! From the Osho Commune International home base in Pune: "Clinton needs Tantra Sutra, not Kama Sutra.")

The books are less than enlightening about Osho's time spent here on Earth; their references to Rajneesh are rare and fuzzy. In the current, uncorrected proofs of the three new St. Martin's titles, for example, the brief "About the Author" section makes no mention at all of Osho's prior identity.

Says Klaus Steeg, president of Osho International in New York: "He changed his name. He was called Bhagwan. But the year before he died, he dropped that. It's a complete deconstruction of his personality." And perhaps more importantly, of all the bad P.R. that his former name brings to mind.

Steeg promises that, while the "autobiography" will tie up some of these loose connections, the wealth of Osho's heavily marketed inner-self discourses do not because they're intended as guides. Michael Denneny, the St. Martin's senior editor currently overseeing Osho titles, says the publishing company, as is its policy, provides a picture of Rajneesh in the books. Still, the photos identify him only as Osho. "If he changed his name to Osho," Denneny reasons, "then it's like Muhammad Ali and Cassius Clay." As far as how forthcoming the autobiography will be, that remains to be seen. Osho "distinguishes between what is true and what is fact," Denneny says. "He prefers the truth." Jim Fitzgerald, who edited a 1998 St. Martin's-published work from Osho called "The Book of Secrets," is more blunt: "I'd be shooting myself in the foot to say that's the guy [whose people] poisoned salad bars.''

Well, forgive and, most of all, forget, right? At least a few media types have short memories. Last year, the New York Times featured a puff piece on Osho International's Lexington Avenue office digs, describing Osho as a now-deceased Indian mystic and making no reference to Rajneesh. A 1998 travel piece in Yoga Journal describing the Pune attraction as a "New Age Xanadu" did connect Osho to the Rajneesh name, but blithely omitted mention of the salad bars or other unsavory details.

Dennis McCafferty lives in Washington and is a staff writer for USA Weekend magazine.