An excerpt from a powerful novel about how disease affects body and soul. 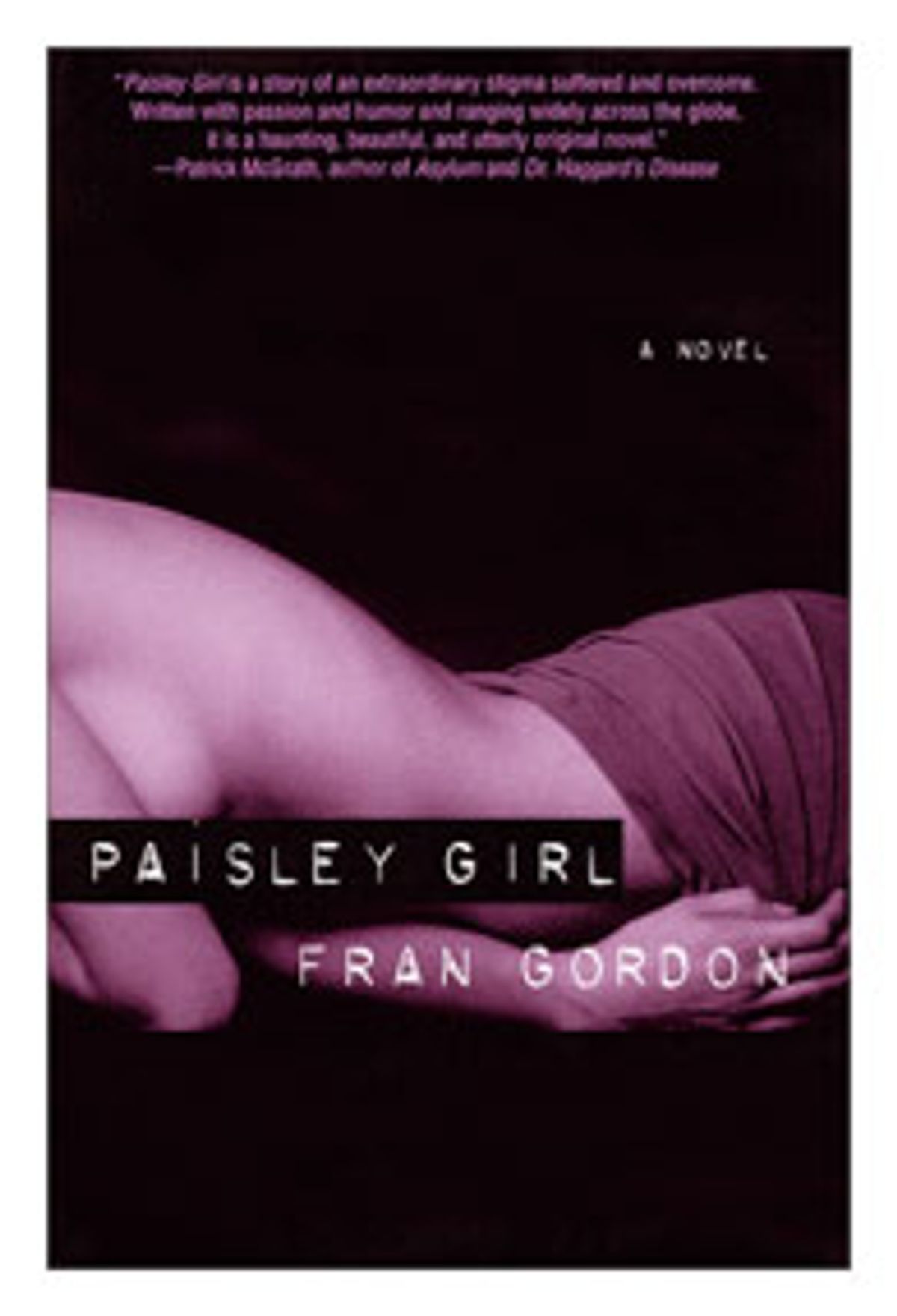 Word has spread of my body, painted in the grotesque but of a shape more pleasing than that of any cafeteria-fed college girl. The students come in ever-increasing numbers. They're just starting out, and have yet to experience the endless cadavers that will numb them to flesh. I make eye contact and the cadets, all male, blush with a heady mix of lust and revulsion. They're back to their boyhood, caught in the bathroom with their father's medical journals. I shiver from stainless steel and observation, nipples hard as gravel. My breasts, as if worth sparing, have remained free of marks. I hold arms close to my sides to cheat them of these dadaist grottos, focus on the face of a freckled boy, and offer him my own. The dim purpling and slight swelling around my lips and eyes make me look beaten. I've noticed that this elicits sympathy from women, while men are reminded of some sagittary within that they don't like being made aware of. The boy quickly averts his gaze to study instead the linoleum that peels up from the floor. There is rot beneath the shiny surface. An ambush of decay. The blood doctor, bland as rice, asks if I'd like to come downstairs later to a staff cocktail party -- "guest-of-honor," he adds, matter-of-factly. Im too weak to decline verbally, so I offer my eyes as response. He sees in them the threat that they will hold his image indefinitely.

"Paisley Girl" is how they see me, what they call me, though never to my face. Pity. I prefer it to the slam of "sweetie," "darlin'" or when they err, when I ache -- "champ." I am not the aloud but what is whispered. Paisley: it's my nom de grrl. The shape of my marks. Abstract, infinite. Unnatural as woman. And while the doctors look to delineate causes -- I see chaos. The geometry between dimensions. Steroids keep me in this interstice; each day I am injected and embalmed.

I'm stuck, but if God is in the spaces in between, then mine has fallen, like a much-needed sock, or a grandmother's earring, behind an empty bureau that I'm too weak to move.

The walls are whitest at four -- forlorn hour before dawn, intemperate hour of burnt fury. Hour of little blue light batting zero. It's then my angel appears, blue as the blink of that clock come unplugged -- and stinking, like vomit. His blue is regulation, the vomit varies. This time it's from the post-op next door, I can tell by the chemical smell -- though he could just as well have been doused with the contentless bile of chemo, an old mans urine, or the tsunamied sea of a preemie. I call him Gil, because he breathes so easily beneath the stench of so many fluids. He calls me Paisley. Aloud.

"Oh man Gil, you smell," I say. "Light a match," and he does. It's our ritual, my only relief. He smiles and removes a joint from the only pocket sewn for orderlies, the one atop his heart. He lights peppermint paper, burns a sweet-smell, kneels beside my prostrate body.

"The docs treating you all right?"

"'They're treating me, all right. Domo even invited me to a staff cocktail party as the 'guest of honor,' but I wasn't sure I could take all that publicity."

"You mean to tell me you missed hapless hour? I bet the elevators were going full blast."

"Well, I'm sure it was a fjte, but I hadn't a thing to wear, what with my tea-length paper gown still at the cleaners and all."

"You keep this up, P., and you'll never make Miss World."

"How about you -- what did they remove from the 'living sac' this time?" I ask.

"Sutures they left in the last. I may have to cut out quick if I hear him start up again, don't want him to choke himself. No sir, that wouldn't be right; he's just a piano teacher, not a rock star."

"Janis Joplin is alive and living with a fireman," I say, and think of lives cut short by their own reflex.

"Last night I had a dream I was outside, first thing I did was to get a good, strong cup of coffee. The cheapest is best, you know, all arabica beans, so I went into Burger King. A boy named Kurt Cobain was working there. He was happy."

"Paisley, you're crazy. C'mon now, gimme some." Then, under his breath, he says, "Bogart."

"The sac must have been happy to see you -- Betty," I say and relinquish the weed.

"Oh they never see me, and if they do, they don't remember," he says, flicking thanklessness like a lost ladybird. "'That juice you can't have does it to them," He calls anaesthetics and painkillers "this juice" or "that juice." "I'm just a dream that maybe it's best they forget."

"Girl, you ain't dying ... girl you're nowhere," he answers between tokes, then passes me the spliff. "Let's roam," he says.

Dreams are mine to keep, and Gil, a man who pulls socks full of toes off feet too decomposed to wash, is my wide-awake favorite. He's unfazed by paisley.

"Marks is marks," he answers. He thinks mine are decorative.

When the night is heaviest, I wink at him. He holds my hand, says, "So how do you think you're doing?"

"You been reading Testiclees again?"

I hear. An emptied man gags and my dream disperses. He drops the roach in his half-full cup, sprays Lysol.

But there's no night, only dawn. No dark hole of forgotten dream to slough my soul into. I'm tired. So tired. But the pain's gone -- for now. I still can't lie on my back, though; they take from what is left, and what is left is woman, just enough round to dig bone-deep down and gauge samples of cells that continue to have the children these hips will not. I lie on my stomach, elbows up, window out of view -- face to the cellblock, back to the door.
They've quick-frozen enough parts of me, unwell and brilliant with color, to be sent thrice round the world for scrutiny. They pluck plugs of tissue like gold rings of the unknown. I feel their rushed sewing with thick thread. I guess they're careless because corpses needn't worry about scars. I know they rush because the local's cocaine, a brief holdover. It's all my blood can tolerate. No more generals, not since the last one.

Domo counted backward. "Ten, nine, eight ..." Hutt. My heart locked; my throat closed. Beyond arrhythmia, beside myself, I saw boxes wheeled in, their light morbid with bones of radium. Churlish hands, stinking of ions and old batteries, rub themselves together before grabbing me back. The doctors, in a panic over the possibility of prosecution, work furtively until a malevolent helpmate appears, a glassy-eyed nurse with needle extended. She's amped for her swing shift -- pitched, impatient, and underpaid. She grinds her teeth, seizes the chart from the bed like a spent casing, and lights a cigarette. I look up, scared and suffocated. I'd like a drag.

"Don't move," she warns. I close my eyes and await relief; I envision a narcotic plunge but am given instead the subcutaneous sting of adrenalin that shakes and slaps me awake. "Lie still; stay down!" Her words come diamond, her inflection a drill. Down. Through murk, flesh, red -- a second strike. The jolt jars my arm. The room is pulsing. My heart is pounding, in protest, in excess, but I am where I am, in America, in illness where stitches become slipshod and dosages increase like darkness in autumn.

And though my heart races, my words come Valium, Stupefying and senseless. The nurse checks my pulse, passably erratic, and sips from the Coca-Cola that I suspect has been her only sustenance for hours, days, a life of a red-spattered white. Then she turns her junk-eaten face away and floats down the hall to save her next victim, all the while muttering a mantra of departure between abraded teeth, "Stupid guys, stupid girl, stupid world."

Studies continue sans anaesthesia. The cocaine solution never lasts longer than twenty minutes -- about the time it takes for the ice in Doc's post-op highball to melt -- then pain comes screaming like a car crash.

More and more they call me "champ."