Does even the most devoted fan really want to scrape the bottom of Dashiell Hammett's desk drawer? 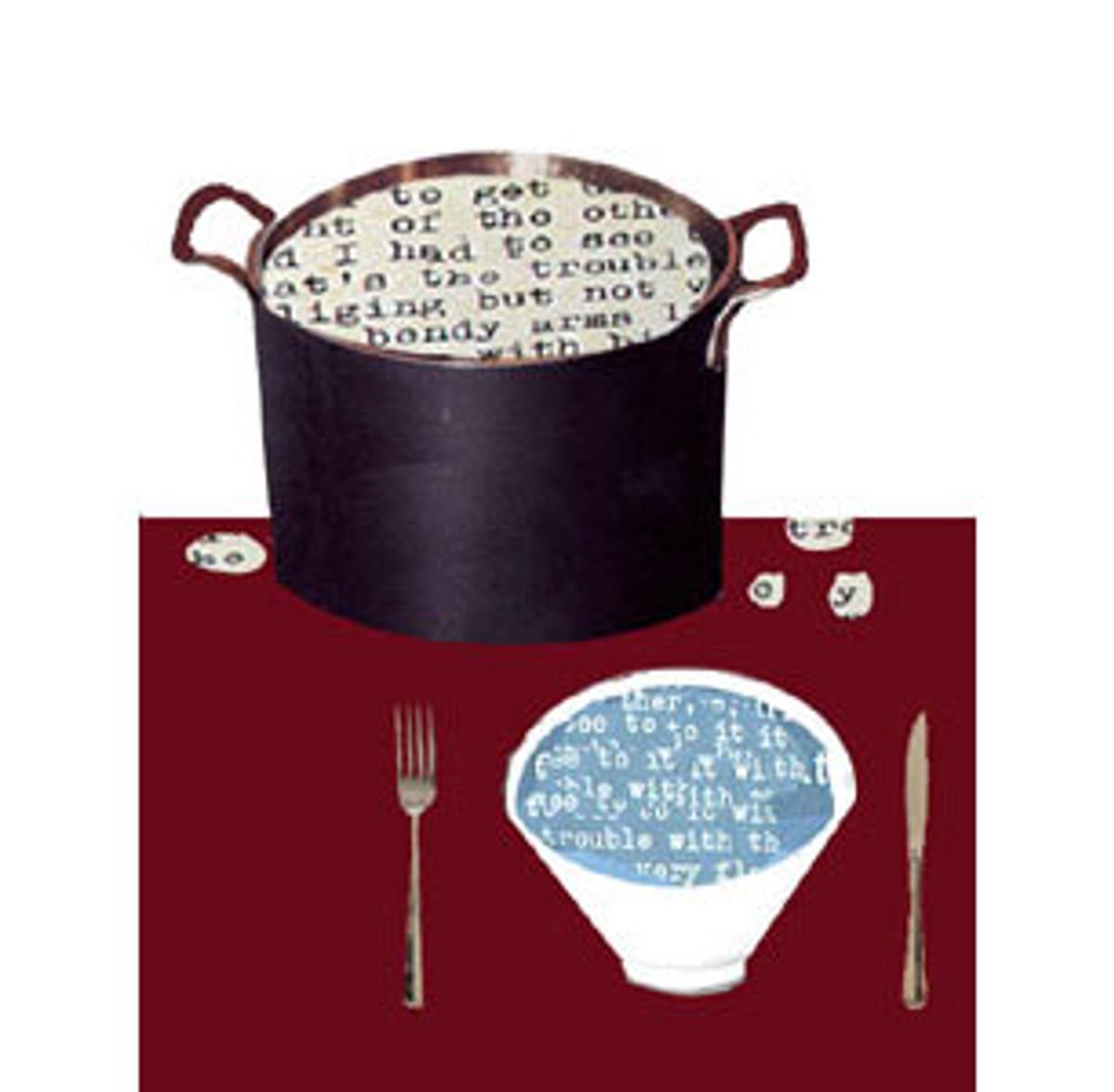 I wasn't too interested in the recently published novels by the late Ernest Hemingway ("True at First Light") and Ralph Ellison ("Juneteenth"). I was too busy waiting for another pair of posthumously published works by Richard Brautigan and Dashiell Hammett.

Some criticized the literary executors of Hemingway and Ellison for dredging up substandard works by writers who were no longer around to protect their reputations. Of course, if it weren't for executors willing to defy a dead author's wishes we wouldn't have, for example, more than a handful of Franz Kafka's stories. Posthumously published books include manuscripts left unfinished when the writer kicked ("Juneteenth" and Herman Melville's "Billy Budd"); miscellaneous documents (F. Scott Fitzgerald's "The Crack Up"); failed work abandoned years before the writer's death ("True at First Light"); juvenilia, like Brautigan's just-published "The Edna Webster Collection of Undiscovered Writings"; and previously uncollected writings, like the new "Nightmare Town: Stories" by Hammett.

In 1992, eight years after Brautigan pulled a Hemingway and shot himself in the head, the "Edna" poems were discovered in Eugene, Ore. Brautigan wrote them when he was 21 and gave the collection of verse to the mother of his first girlfriend, telling her, "When I am rich and famous, Edna, this will be your Social Security." Brautigan did get rich and famous, but he died a literary has-been. These poems are a windfall only for those readers still interested in Brautigan, or for those who have just discovered his finest work, which includes "Trout Fishing in America" (a novel, not a field guide).

Reading a writer's juvenilia -- posthumously or otherwise -- appeals most to younger readers. Remember when you discovered Jack Kerouac or Doris Lessing or whoever first made you realize the power and magic of books, and you devoured everything you could by the magician, good or bad? A devoted reader -- and hopeful writer -- who absorbs a great author's oeuvre learns that the creation of a masterpiece can be as tricky as shooting an apple off someone else's head (as opposed to shooting your own head, the plan Hemingway and Brautigan eventually opted for). Sometimes you miss. Oops.

I first discovered Brautigan as a kid in the early '70s when his novels and stories were being reprinted in mass-market paperback. I still own my flesh-colored copy of "Trout Fishing in America," with its cover photo of Brautigan in jeans, vest and a 10-gallon hat, standing beside a seated woman with buck teeth and granny glasses. The blue cover of "Watermelon Sugar" shows the writer shirtless and standing behind a pubescent girl. At that time, other male novelists were always photographed wearing suits and trying to look dignified. But Brautigan showed me that a great novelist dressed like a hippie and always had a girl.

Brautigan's pal Keith Abbott wrote in a 1985 article for California magazine, "Once, when we were on Clement Street [in San Francisco, Brautigan] stopped at a record store and pointed at the album cover. 'Another rock star posing on the front of his record -- I'm so tired of that.'" Abbott observed that Brautigan was "completely oblivious" to the fact that much the same could have been said of himself, posing for the covers of his own books with "his various girlfriends."

But the implied message of all Brautigan's covers was not "This is a stud who gets chicks," but rather, "This is a writer who 'gets' (as in 'understands') chicks." Brautigan's love stories perfectly suited the unmacho tenor of the 1970s. In the novel "In Watermelon Sugar," Brautigan populates the world with men who do the dishes. Men who cook the meals. Men who then get to make love with lovely women at all hours of the day. And when they are done they talk "about the tigers." Later they talk about "a lamb going for walk." Then they make love again.

Gosh! Life after high school was going to be simple-minded, but full of sex! But then as disco, punk, Quaaludes and "Saturday Night Live" finished off the gentle '70s, Brautigan's literary innocence came to seem, well, icky to readers like me who were still paying attention to his work. And, in 1975's "Willard and His Bowling Trophies: A Perverse Mystery," Brautigan's la-di-da prose concerned itself with ... venereal warts. The men still did the dishes, but this one's diseased penis is described as resembling a "dead octopus tentacle." Please! Bring back the tigers and lambs ...

Just a few years ago, I found myself reconsidering Brautigan's '60s works, pre-venereal warts. There is something valuable and incredibly vulnerable about true innocence, even to someone whose innocence is long gone. Brautigan was at his best when he was Percival with a typewriter. In his goofy version of Americana, pain and death did exist, but they were as substantial as a cartoon. So when I heard about the publication of "Edna," I was looking forward to it. Yuck. The poems are as terribly precious as the stuff we all wrote in high school English class. An example:

and I will go

But a brief series of poems, "A Love Letter From State Insane Asylum," did deepen my insight into Brautigan. Actually, it wasn't the poems themselves -- terse messages like: "I want to write. I want to write and write and write." It was the tale of what inspired them. In the book's forward, Keith Abbott (the same Abbott of the California magazine article) relates that after a girlfriend dissed young Brautigan's poetry, he was so distressed to think that he had failed as a poet that he went to a police station and demanded to be arrested. "What for?" the cops said. "You haven't broken any laws." Brautigan responded by taking a rock and smashing a glass partition. That act earned him a short stay in the bughouse. It's no surprise that a kid so emotionally volatile would end up killing himself before he reached 50.

Dashiell Hammett killed himself with the time-honored method of too much drink and cigarettes, but then Hammett was a generation older than Brautigan. The only other biographical similarity between the two is that they both lived in San Francisco, albeit during different decades. Hammett also lived in New York -- the burg I moved to myself in the late 1970s. New York has always been a hard-edged town. In the late 1970s, it was also a punk rock town. But instead of embracing the nihilistic frenzy of the club culture at CBGB's, I chose to devour Hammett's tough-guy prose. It was the writerly equivalent of punk rock -- nihilism cracking into art.

Hammett could describe a gunsel getting gutshot with the spare grace of a haiku. There are several tasty, violent set pieces in the new collection of his stories, "Nightmare Town." In the title story, a tough drifter engages in homicidal fisticuffs in the back seat of a speeding convertible:

The car moved. One of the girl's hands came up to grasp the wheel, holding the car straight along a street she could not see. A man fell on her. Steve pulled him off -- tore pieces from him -- tore hair and flesh. The car swerved, scraped a building; scraped one side clear of men. The hands that held Steve fell away from him, taking most of his clothing with them. He picked a man off the back of the seat, and pushed him down into the street that was flowing past them ... Pistols exploded behind them. From a house a little ahead a bitter-voiced rifle emptied itself at them, sieving a mudguard. Then the desert -- white and smooth as a gigantic hospital bed -- was around them. Whatever pursuit there had been was left far behind.

On first reading, this description seems cinematic, like some Quentin Tarantino shooting script. But a closer look reveals the literary touches. The rifle that fires with a bitter voice. The desert as a "gigantic hospital bed." This type of writing -- as tight as a shooting script but just enough literary flourishes to make it breathe on the page -- was Hammett's consummate art.

As for Hammett's psyche, in his own way he was as wounded as Brautigan. Hammett only wrote from 1922 to 1934, then abandoned publication to wrestle with the downside of fame, booze, Lillian Hellman and the anti-Communist witch hunts of the early 1950s. When the man died in 1961, all his novels ("The Maltese Falcon" and "The Thin Man" among others) were in print, but his great pulp shoot'em-up short stories, first published in Black Mark magazine, had been out of print for years.

It wasn't until 1966, five years after his death, that the first hardcover collection of short fiction, "The Big Knockover," was published, followed in 1974 by the splendid if not quite top-notch stories collected in "The Continental Op." And 12 years later, a long, forgotten novelette called "Woman in the Dark" was published as a short novel. When I first read "Woman in the Dark," the prose seemed fresh. Electric. Now, several years later, I have to admit that the work is really second-tier Hammett.

Now we have "Nightmare Town." In the book's introduction, William Nolan claims that this is the "largest collection of [Hammett's] shorter works and by far the most comprehensive." It's big all right. But "comprehensive" of what? Certainly not quality. It really is bargain-basement Hammett. Despite flashes of brilliant writing, almost every story is mired by corny detective-fiction conventions.

"How did you rap to Kelly?" a cop named O'Gar asks Hammett's roly-poly detective, the Continental Op. "Miss Menbrook was walking north on Leavenworth," the Op explains, "and was halfway between Bush and Pine -- when the shot was fired. She saw nobody, no cars, until she rounded the corner. Mrs. Gilmore, walking north on Jones, was about the same distance away when [Mrs. Gilmore] heard the shot, and saw nobody until she reached Pine Street. If Kelly had been telling the truth, she would have seen him on Jones Street. He said he didn't turn the corner until after the shot was fired." Give the Op a Belgian accent and he could be Agatha Christie's Hercule Poirot wrapping up a traditional British mystery, the genre "Black Mask" was suppose to blow away.

I know there are still more uncollected Hammett stories, but I think this volume is it for me. My curiosity about the limits of Hammett's prose has been exhausted. Or more simply put, I suffer from Hammett burnout. A guy can only read so many car-chase-guns-firing-in-the-middle-of-the-night scenes before sniffing around for some Jane Austen to read. As for Brautigan, the "Edna" poems make Brautigan's best work seem even thinner. "Trout Fishing in America" is still a classic novel, but now I suspect that you just wouldn't want to examine it too closely.

Does my disappointment at reading Brautigan's and Hammett's leftover writings prove a larger point about the publishing of substandard posthumous work? Well, the Brautigan side of me wants every title in a writer's oeuvre to have its chance. Maybe there's a kid somewhere just discovering Brautigan who will benefit from reading his juvenilia. Then the Hammett side of me wins out. I think of all the mugs who claim a bad review in the Sunday New York Times is better than no review at all. They're wrong. They're the same jerks who say a lousy posthumous book doesn't soil a writer's reputation. Ha! Screw the kids. A tough guy's literary life stops when he croaks (if not years before then, as it did for Hammett). Nobody benefits from damaged goods. Save the posthumous stuff for eggheads in libraries.

Do I sound convincing? Let me tell you about the tigers and lambs ...