Dan Finnigan, president of Knight Ridder New Media, talks about how "the No. 1 newspaper chain on the Internet" is destined to be the king of online local news. 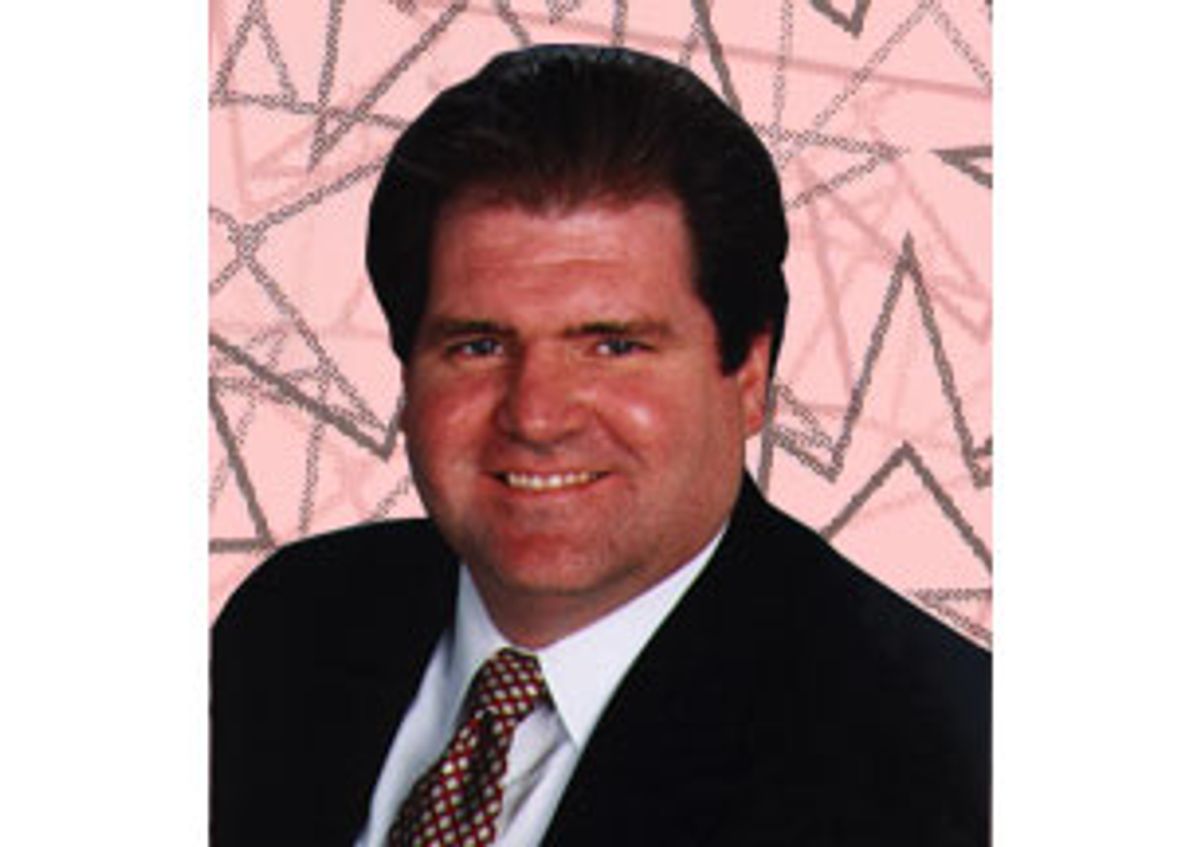 Knight Ridder knows newspapers -- as one of the biggest newspaper conglomerates in the United States, it owns 31 newspapers in nearly as many major markets. Knight Ridder also knows the Net: Early on, the company launched Web sites for many of its print properties, experimenting with online content and paving the way for many newspapers to come. These days, it is rare
to find a newspaper that isn't online in some form, and many can thank projects like the Mercury Center, from the San Jose Mercury News, a Knight Ridder paper, for their inspiration.

But converting a staidly profitable newspaper business into an ambitious Net company is no easy task. This year, Knight Ridder underwent several massive changes aimed at aligning itself more closely with the digital world. First, it moved its headquarters from Miami to Silicon Valley, eschewing its longtime home for the technological capital of the world. The company launched a new online portal strategy, coalescing its varied Web sites and brands under the
RealCities umbrella network, and is now rumored to be spinning off Knight Ridder New Media into a separate business, with an eye toward an IPO.

And finally, Knight Ridder hired Dan Finnigan, an industry veteran and expert in newspaper-Net convergence strategies, as the new president of Knight Ridder New Media. Finnigan, who most recently worked out of Los Angeles as the CEO
of telco giant SBC's online operation, Smartpages, has spent 10 years researching and working online. He began his career as a researcher for Net pioneers David Farber and Vint Cerf back in 1988, before helping the Los Angeles Times launch its Net strategy in the early '90s.

Knight Ridder has now charged Finnigan with the daunting task of turning a traditional newspaper company into a Net start-up; making sense out of a confusing array of existing online brands; and building a network of partnerships to corner every local market in the United States. He recently spoke with Salon Technology about these challenges and the future of the written word in the online world.

We're on the verge of a real explosion in the use of the Internet locally; every local business in two years is going to have a Web site. It's going to be like a telephone number, almost. The demand for local eyeballs for local advertising online is going to grow as a result, dramatically.

Aggregating the local eyeballs needed for those kinds of businesses is going to require consumer products that go beyond what an online newspaper does. The goal here is, over time, to build a super-regional brand that drives traffic to local newspaper sites, local radio station sites, local TV sites, but is essentially the first stop one goes to for local information in the Bay Area, or in Miami, or in the Twin Cities. It is my ultimate goal that we are the "go local" button all across the Net -- across vertical sites and national portal sites.

Over time I don't know what will happen to newspaper URLs and brands -- to me, they'll just be different kinds of doorways into local content. But there's no doubt that our marketing thrust going forward will be to build these superregional brands.

Being the "go local" button everywhere across the Web is quite a challenge for a newspaper company that has a presence in only 31 markets. How do you plan to grow your network outside of the regions you already own?

I intend to partner with local media companies that bring essentially the same kind of thing to the table . [They should have] local marketing ability, local sales ability -- like newspapers, local TV stations, local radio stations and local publishers of almost every type.

My goal is not to compete with them, my goal is to share in the building of the same network resources that we need to build our local franchises. It's cost-effective to do it that way and ultimately makes it more likely that national vertical sites will want to cut a traffic distribution deal with us.

What are some of the technological challenges of running such a big network of sites?

The challenge is to select the right technology partners; and to plan ahead enough so that the product is flexible for a local marketplace and isn't too expensive to operate. In other words, the local business in Philadelphia can tweak it to their needs differently than the Miami business can tweak it.

Right now, we can launch a regional hub in 48 hours, and it can be maintained and operated by the local operation with minimum effort. They can take it from there -- they can build more content if they want to; create more products off of that platform, and it doesn't take too much for us to maintain what we've offered them.

The technology is provided by Inktomi and Commtouch, by Kinzan and KOZ.com -- we haven't built any of this stuff, we've just integrated it. These local franchises can choose any one of them that they want.

You say you envision an explosion of the local markets online in two years; this isn't the first time I've heard that. Back two, three years ago we saw a proliferation of city sites like Sidewalk and Citysearch, which also predicted that there would be an explosion in two years. Instead, these
companies are struggling with a glut of competitors; even Microsoft recently sold Sidewalk to Citysearch. Why do you think you can succeed where others are failing?

To me that only confirms that what we bring to the table is really valuable. And right now, with Sidewalk folding in with Citysearch, there are less sites competing with me by definition.

Knight Ridder has no choice but to take this battle to its end. We have no choice but to win it. We believe that the regional hub strategy is the best way, if we do it quickly and move fast and evolve quickly, to lock in and continue our No. 1 role in each of our markets.

Knight Ridder isn't new to this strategy, though -- you've been developing local city sites for several years now. What has the company done right and wrong so far?

What we've done right: We're the No. 1 newspaper chain on the Internet. We have 3.2 million unique visitors; 5.3 percent of all U.S. Web users is our reach; some of our Web sites are literally profitable today. We've lost 25 percent less money than we did last year; we're about to hit $30 million in revenue. So those are some good things.

However. Going forward we have got to move much more quickly and select what one, two or three things we're going to do with our product and business for the next six months and focus on those things, the way an Internet company here in the valley does.

What are some of the challenges in creating a new-media start-up within an old-media conglomerate?

You had to go through the first phase of doing what a print newspaper would expect out of their online department -- to see all the content online, the classifieds, advertising products available for them to sell. All of that's been done. Now, I think, there is great recognition that that effort is a nice thing and has been beneficial to the print business, but won't become its own Internet business in its own right if it doesn't take the next step of providing content that's not in the newspaper and creating ad products that won't be sold by the local newspaper channels, and driving traffic from sources other than the newspaper.

I think that is the key message of this regional portal product that we just launched -- none of the new features of it are newspaper-centric. It's created, essentially, a kind of template product that we now have to fill out through local content development efforts and creative marketing efforts. It's forcing us to take our business to the next phase -- which is
to be an Internet-only product, and an Internet-only business model.

You've been thinking about newspapers and the Net for 10 years now. What is the difference between what you originally envisioned newspapers doing online and what you see today?

When I was at the L.A. Times a team of us approached the two graduate students that created Yahoo -- Jerry Yang
and David Filo -- because when I saw Yahoo, I instantly said, "This is the future of the newspaper industry, where we won't create all the content but we'll be aggregators of it."

With that, we went down to try to buy Yahoo -- for $1.4 million. We were the first to offer them anything. I remember Jerry Yang saying, "How are you going to make money?" A week and a half later AOL offered them $4 million, and then they got really smart and got their own financial advisor and the rest is history. I think newspapers have focused a little too much on their own content on the Internet as opposed to leveraging that content and brand to make available anything consumers say they want when they are online.

I think that consumers online are in a more active mode, a search mode, find-what-they-want mode, as opposed to a sit-back-in-your-chair-and-read mode. That by definition means that the content requirements for Internet products are different. I think we're just now as an industry getting it.

If people don't really read and kick back online, what does that mean for traditional newspaper-based content? Is that going to go by the wayside to be replaced by informational-nugget and video content, especially once broadband gets here?

I think that you are going to see better and cheaper printers in the household that will be hooked up to the TV set on broadband. We'll need to create and partner for more of that kind of pithy, quick, short summary -- like content that is maybe a little more audio- and video-oriented. But people are
going to want increasingly to have hard print copies of whatever it is they find on the Internet. It's like clipping articles out of the newspaper, which will be an opportunity for us to distribute interesting kinds of advertising as well -- coupons at the end of that printout.

Consumers have shown throughout history that they like to creatively combine media as they emerge, reading stories while they watch the football game. It's going to increase the consumption of both kinds of content, but we absolutely have to figure out how they work together better.

How do you compare working in the high-tech industry in the L.A. area to being up here in Silicon Valley?

But now that I'm here, this is as passionate an area as those combined -- these people are actually convinced that they are changing the world. It seeps into every aspect of this community. That's the reason I came here -- this is my industry and there's no better place to be right now, if you can afford a place to live.