The rugged inhabitants of this starkly beautiful, isolated land are now preparing for the latest invader: Winter. 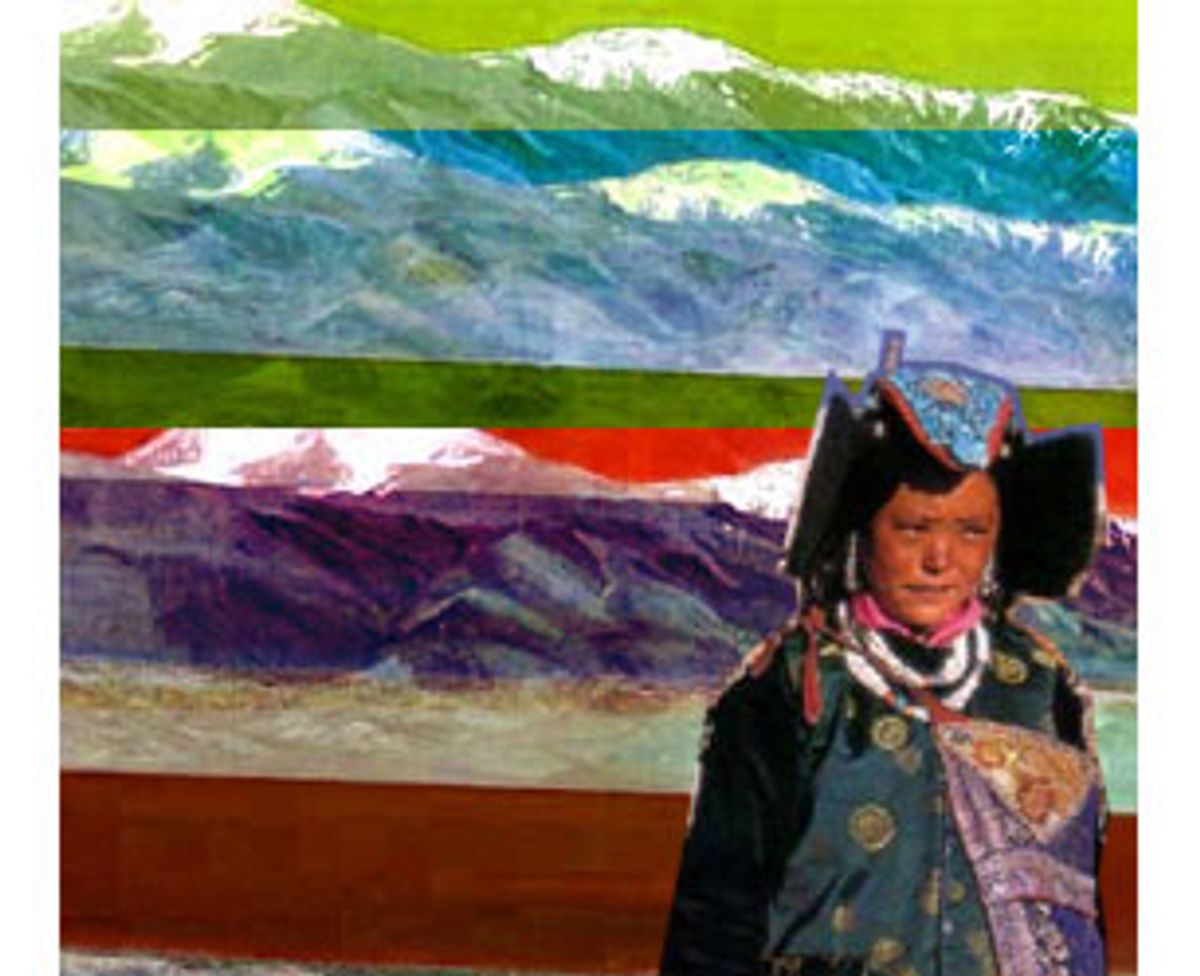 Snow is already filling the passes high above Ladakh, silently sealing it in a wintry cocoon. There, it will incubate for nine months before the sun defrosts it, initiating its rebirth. As the chill winds begin to rise, Kunzang and her two sisters are saying goodbye to the last visitors about to be driven out of the valley by the encroaching cold. Having gathered in the last of the year's crops, they will begin battening the windows and doors of their stone house as they prepare to endure another long, bitter winter.

The snow that seals the passes leading to Leh, Ladakh's capital, is only one of many oppressors in the former kingdom's eternal struggle to maintain its identity. From earliest times, the stoic, heroic inhabitants of this aerial island crushed between the Himalayan and Karakoram ranges in northern India have been assailed by invaders -- geologic, political, climatic and touristic -- that would have reduced a lesser people to penury or wiped them out altogether.

Even in good weather, one senses the region's Shangri-la-like isolation, the tall ranges that hem it in. "An island in a sea of dust" is less a metaphor than a description of its remoteness, as well as a comment on its genesis. Geologists contend that when the earth's jigsaw tectonic plates began to break apart, Ladakh was an isle caught between colliding continents. Sandwiched between India and Asia, Ladakh was lifted high into the air, and then rent by seismic upwelling that transformed sea bottom into towering ranges that, like honeycombs, embraced dozens of deep valleys.

To reach Leh, one must cross the 17,582-foot Taglangla Pass. Traveling to the next valley north, the Nubra, requires driving a wretched track through the Khardungla Pass -- which, at 18,380 feet, ranks as the world's highest motorable road.

Geologic upheavals also provided Ladakh with barren marine scrabble for farm land, while, its setting in the lee of the Himalaya deprived it of the monsoon rains that shower fertile India. Surveying the valley from the pass leading to Leh, it is hard to regard Ladakh as anything but an arid moonscape: tan soil rising to buff dirt mountains melding into the white snow, and from there into a cobalt sky unhazed by moisture. Leh's squat, two-story, unpainted stone and mud buildings reflect their surroundings, seeming to rise from the dun landscape, rather than having been set upon it. Over the rooftops looms the craggy bluff crowned by the huge adobe-covered Leh Palace, visible from every point in the city and resembling more the hills surrounding it than a rustic Versailles.

Leh is a created town, the handiwork of farmers who have channeled the snowmelt coursing down the mountains, building dozens of canals that water the town before dropping into the Indus River. Walking the town's dirt roads, one crosses a canal every hundred feet or so; without them, the town would cease to exist. This fact becomes apparent when one stands on the valley rim: Where the irrigation system's reach ends, the desert begins.

Kunzang and her sisters farm a small plot surrounding their house, an acre separated from its neighbors by high walls of stacked stone that protect it from marauding cows and sheep. In the short growing season, they plant barley, which will be roasted and ground into tsampa, the staple grain of their diet. They also plant vegetables for their own use and for sale in Leh's markets. Because the harvests barely feed them, they supplement their income by turning their three-story stone and wood home into a guesthouse for the hundreds of backpackers who flow into the valley once the passes have been opened at the end of June. For a few dollars, guests have a bare room looking out on fruit orchards and a bed with a thin mattress. The shared bathroom features a "dry toilet" that requires no water, an attempt by the ecologically minded Ladakhis to stretch limited resources even farther. Hot shower water is provided by the bucket.

Ladakh's diverse population is the result of several waves of immigrants to its desolate valleys over the past two millennia. First to arrive were the nomadic Khampas from eastern Tibet, who each season pitched tents on stream banks to watch their yak herds. They shared the valleys with Drukpas (or Dards), pockets of whom still exist in some of the lesser valleys. Their Mediterranean features and bacchanalian fertility festivals suggest possible descent from soldiers who deserted Alexander's Macedonian army and marched to the banks of the Indus in the third century. Discouraged by the prospect of re-crossing the Persian deserts, many of these elected to stay and farm. Ladakh's isolated valleys must have seemed much like the city-states compartmentalized by the mountains of their native Greece.

It was the Mons from India who, in the eighth century, established permanent settlements. Professing the Lamanist form of Buddhism, they enjoyed a close association with Tibet until the middle of this century. Kunzang and her friends look Tibetan and inhabit a culture heavily influenced by its neighbor. Scores of gompas (Tibetan monasteries) hug the hillsides and house purple-robed monks; even the local language and gur-gur -- the "yak butter tea" concocted from green tea, salt, yak butter and boiling water mixed in a churn -- show evidence of Tibetan influence.

Ladakh's early wealth came from its position astride the trade routes branching from the Silk Road. Indian goods were carried by yak from Leh over the Karakoram Pass to Yarkand and Kashgar in far western China, a trade that ceased only in 1947, when India closed its northern borders. These early arrivals were succeeded by waves of peoples intent not on trade, but on occupation. The brooding fortress looking down from Leh's Peak of Victory was built in the 16th century to commemorate the successful repulsion of Balti-Kashmir armies. But Ladakh's wealth lured them back time and again until, in the 1840s, the Kashmiris defeated Ladakh's army and deposed its royal family, sending it into exile at Stok, just south of the Indus. In 1846, Ladakh was officially incorporated into the princely state of Kashmir.

Today, it is still a political pawn. When the Chinese invaded Tibet in 1951, and again in 1959, they simply cut off a chunk of Ladakh for themselves, billeting troops to make it a fait accompli. To defend against a possible Chinese invasion or incursions by terrorists caught up in India's struggle with Pakistan over who should rule Kashmir, several battalions of Indian troops are stationed in Ladakh, an occupation that has cost the New Delhi government $1 million a day since 1988. India's military presence is understated but omnipresent. Each day, one can hear soldiers shouting in cadence as they maintain military preparedness. Live rounds shatter the peace of the valley as soldiers practice marksmanship.

The second large contingent of outsiders are the Kashmiri Muslim businessmen, who destroyed their own tourism industry through sectarian violence in Srinigar. Their shops line Leh's two main streets, their fronts draped with Kashmiri shawls, carpets, papier-mâché boxes and leather purses. Merchants loll in front of their shops, calling out to tourists, their manner relaxed but insistent. On the sidewalks just down the street, Ladakhi women in traditional robes and peaked hats sell produce and gossip, occasionally flicking their scarves at sheep trying to supplement meager pasturage by darting in to steal a carrot or a cabbage from an unwary vendor.

With administration in the hands of the Indians and commerce controlled by the Kashmiris, the Buddhist Ladakhis have virtually ceded all control over their political and commercial affairs, leaving them to farm and operate tourist hostels. The presence of the two foreign forces is underscored each day before dawn, when the soldiers rend the air with reveille at 4:30 a.m., and the muezzin at the mosque that dominates the town square announces the day's first prayers.

In the past few years, Ladakhis have begun to call for a measure of autonomy, focusing their ire on the fact that school lessons are taught in Hindi and English and children debate Indian politics rather than local issues. A Leh-based magazine, "Ladags Melong," published in English and Ladakhi, has been outspoken in calling for greater local participation in the district's affairs. In response, Indian authorities have begun relaxing some of the strictures and involving Ladakhis in political matters -- but this is a long way from the independence many would like to see established.

Still, even control over local politics and commerce won't help Ladakhis fend off the unrelenting attacks of the principal invader: the cold. The Ladakhi growing season is limited to a few summer months; for the rest of its food and fuel, it must rely on caravans of trucks trundling into the valleys from India. So severe is the winter cold that pigs, chickens, ducks, buffaloes and cows find it impossible to survive; eggs must be transported overland from India, and only in the summer. Like other Ladakhis, Kunzang owns several dremos -- a hybrid of the cow and the hardier yak -- to provide milk.

It is the latest set of invaders -- tourists -- who provide them the cash to pay for the imported goods they consume. These tourists, however, disrupt the local economy, corrupt the culture and threaten the carrying capacity of the land. To extend that capacity, a nonprofit Ecology Center has been established to experiment with environmentally friendly agricultural processes, such as greenhouses to grow winter crops.

Despite the difficulty of their lives, Ladakhis accept their lot with Buddhist detachment and smiles for the stranger. With everyone they meet, they exchange a cheery "Jule," an all-purpose word meaning "hello," "goodbye," "please," "thank you." They are generous in their hospitality and gentle in their demeanor, factors that have endeared them to visitors from other lands.

But now the tourists and the Kashmiris are leaving, driven away by the bitter winter cold. Like Russians, Kunzang and her sisters will retreat floor by floor, room by room, driven back by the cold until they huddle around a fire in a single room. Here, they will enjoy a measure of autonomy and bind their cultural community together, unhindered by outsiders, until the hot July sun melts the walls and permits a fresh wave of intruders to flood their valley.