Penelope Leach faces off with the Ezzos in a nasty turf war. Someone needs a spanking. 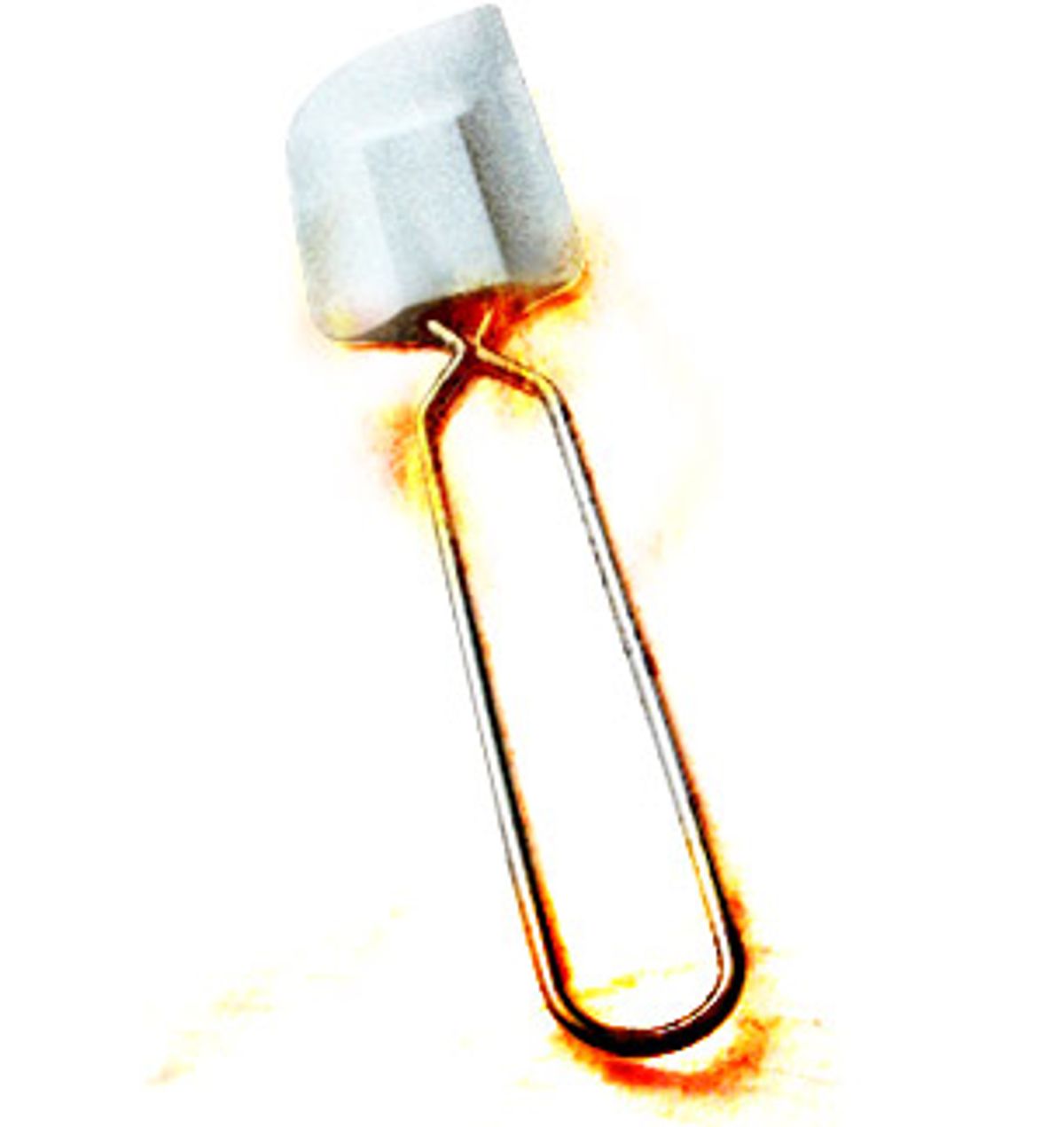 Dr. Penelope Leach, child-rearing guru and advocate of unlimited affection for children, appears ready to administer a spanking. The British psychologist and author of the parental advice bible "Your Baby and Child" will not, however, be putting any kiddies over her knee. Instead, her sights are set on American Gary Ezzo, an evangelical Christian minister and competing child-care expert who, with his wife, Anne Marie, advocates a "tough love" approach to child-raising. That approach includes spanking as well as scheduled feedings, scheduled potty training and a rule that infants be left to cry themselves to sleep at the age of 8 weeks.

"I believe their programs incite child abuse and should carry a
government health warning," says Leach, poised with a great deal of tension on a couch in her Hampstead home office. "We don't allow pediatric pornography, so we should not allow this."

That which should not be allowed is a visit to England by the Ezzos, who plan to invade Leach's territory this week to give a series of lectures (the largest is set to take place at London's Westminster Chapel on Saturday). Leach, backed by an alliance of 200 organizations called Children Are Unbeatable, has condemned the Ezzos as "dangerous" and has attempted to ban them from any advocacy on British soil. (The British government has not yet responded to her demand.)

Gary Ezzo, who has no plans to cancel his trip, has a "now more than ever" attitude about the whole affair. In fact, he says in a phone interview, Leach is to blame for "Britain's decline into immorality" and must be stopped.

"One of the most destructive influences in England has been the child-centered parenting plan -- the Penelope Leach philosophy -- which has dominated for the last 20 years," says Ezzo.

But Leach has no intention of relinquishing her child-care crown. In a struggle for the hearts and minds of suggestible parents, she is firmly entrenched at the head of the pack. Her words have been gospel since the late '70s, when "Your Baby and Child" replaced "Dr. Spock's Baby and Child Care" as the parenting bible. Her franchise has since expanded to include five books that address parents around the world in 29 languages. She also is featured in an ongoing series for Lifetime Cable Network called "Your Baby and Child With Penelope Leach."

Undaunted by either the threatened ban or Leach's status as a parenting eminence, the Ezzos say both hurdles will be overcome -- if only, they claim, because it is God's will.

But faith notwithstanding, the Ezzos are counting on more tangible support in the face-off with Leach and her backers. The couple run a successful, for-profit "parenting ministry" out of Simi Valley, Calif., called Growing Families International. Gary Ezzo is the author of many child-care guides, the most popular of which, "On Becoming Babywise" and "Babywise II," consistently dwell in the top 10 on both mainstream and Christian booksellers' lists of the most requested parenting titles.

The couple's trip to Britain has been organized by Christian Education Europe Ltd., a group that supplies biblical teaching materials, including some designed by the Ezzos, to evangelical and home education projects. The group's goal -- to highlight a new "moral emphasis" in British child rearing -- is "really catching on with folks," reports Mark Severance, a California assistant to the Ezzos.

This is not the first time that experts have battled over nurturing styles, particularly disciplinary techniques. In a recent, spirited engagement, John Rosemond, an advocate of "adult led" (early) toilet training, publicly criticized Dr. T. Berry Brazelton, champion of the "child-led" (late) training, for serving as a spokesman for Pampers.

But the Leach-Ezzo spat is something of a "High Noon" moment in the feud between child-centered advocates and those who believe in the Ezzos' brand of (in their words) "rightly applying God's principles in parenting." At stake: both the "future of our children" (everyone's words) and the very lucrative market that preys on parental concern. It is hardly a simple matter of you say tomato/I say tomahto.

Leach is famous for her "child-centered" approach, which encourages parents to painstakingly "kidproof" their houses rather than swat a toddler for fiddling with the stereo. The Ezzos say that indulging children makes them dependent and irresponsible and that, once children reach the age of 2 and a half, they should be required to clean up their own "accidents," even soiled clothing.

Leach believes children thrive with unlimited affection. The Ezzos say excessive cuddling creates spoiled children. An occasional spanking, they say, is not child abuse but good parenting -- since children are born with a natural tendency toward "waywardness."

In fact, the Ezzos, parents of two grown children and grandparents of six, recommend swatting babies on the hand or thigh for misbehavior that includes such minor wrongdoing as putting fingers in food. Spanking, or "chastisement," can begin at 18 months, they say, with parents giving as many as five swats a day until the child is 3. Beyond that age, more swats are allowed. (The Ezzos recommend using a flexible instrument, such as a rubber spatula.)

This sort of advice enrages Leach, who helped found a group called End Physical Punishment of Children (EPOCH). Smacking children legitimizes the use of violence in society, says Leach. "My feelings have never changed: I still don't believe there's anything to be gained by making small babies unhappy," she says.

Such is Leach's influence in the world of parenting and child welfare that her outcry over the Ezzos' impending visit has caused the National Society for the Prevention of Cruelty to Children in Britain to initiate an investigation of the pair. The agency says it is "looking into the couple's teachings" in anticipation of their visit.

"Babies need love and care, not physical punishment," a spokesman for the society said. "We don't believe these people are qualified to give advice, or that they have any credible research to back up what they're saying."

Backed by many fundamentalists and a growing number of parents who believe children are out of control due to parental permissiveness, the Ezzos are unconcerned about their reception in Britain.

It's hardly the couple's first brush with controversy. In 1997, their approach to feeding infants drew "letters of concern" from approximately 100 health-care providers to the American Academy of Pediatrics. Later the AAP, which is the world's largest organization of pediatricians, issued a "media alert" in which it emphatically reaffirmed its stance that it is best to feed babies on demand.

Yet the Ezzos soldier on. Perhaps they are buoyed in their efforts by surveys like the one conducted last August for BBC Radio 4's "Today" program, in which seven out of 10 parents questioned said they believed it was acceptable to smack their children if they misbehave. (Under British law, a parent has the right to use "reasonable chastisement"; six other European countries -- Sweden, Austria, Cyprus, Denmark, Finland and Norway -- have banned all physical punishment against children.) In any event, despite the protest of Leach and her devotees, an estimated 1,200 people are expected to show up for the Ezzos' lecture Saturday on raising "model offspring."

Shelley Emling is a freelance writer in London.