The Pleasure of Finding Things Out: The Best Short Works of Richard Feynman"

The new Richard Feynman collection is as illuminating, pleasurable and frustrating as the scientist himself. 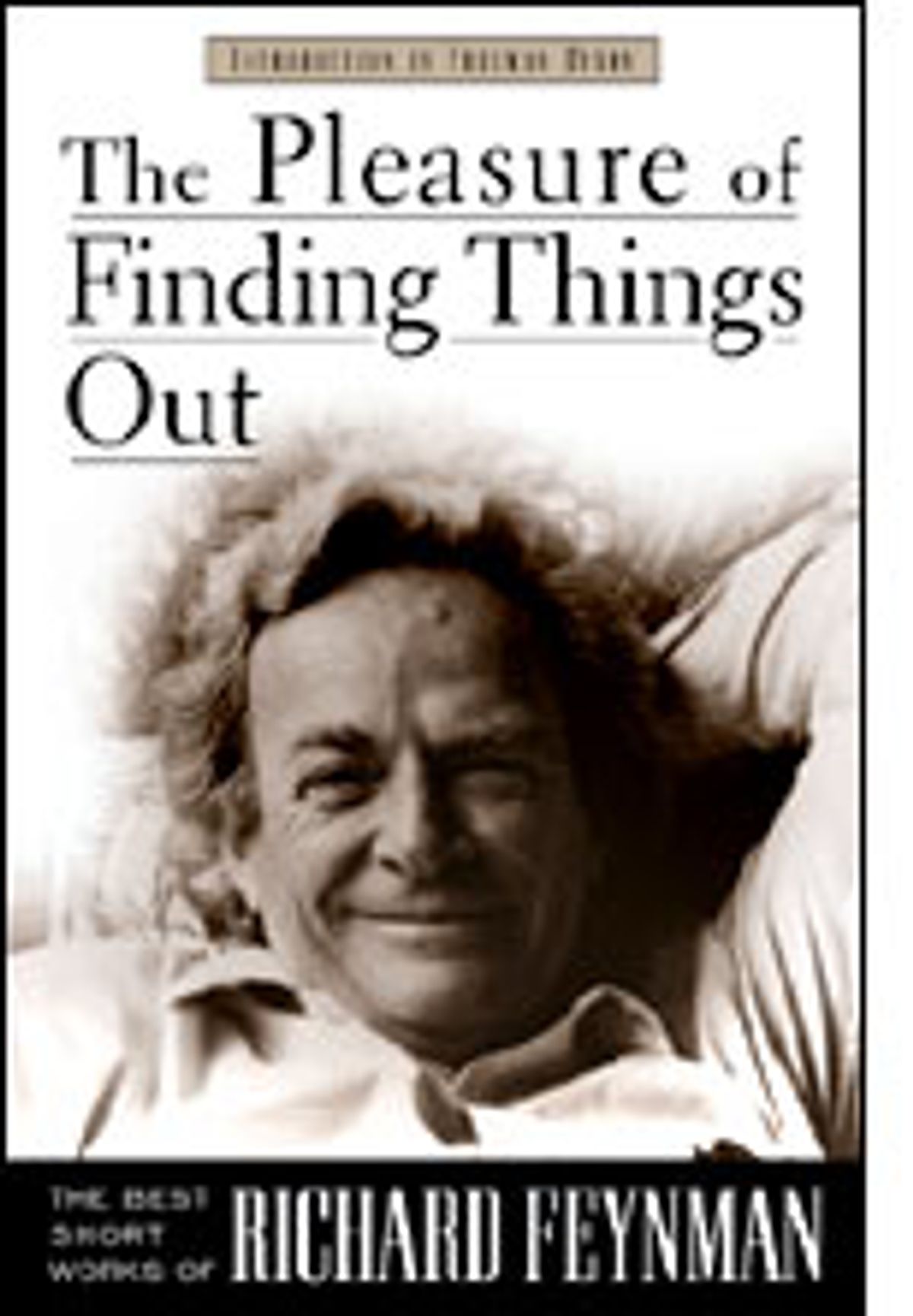 How strange that the popular image of one of the greatest minds of the
century rests so heavily on a flimsy set piece involving a glass of ice
water and a scrap of rubber. But Richard Feynman is fixed in the memories of many
non-scientists as the iconoclast on the Rogers Commission, which investigated
the space shuttle Challenger explosion -- the lab geek with the crazy hair
who, in the middle of a hearing, cut through the bureaucratic obfuscation
to perform his own telling experiment.

Knowing that flexibility was crucial to the rubber o-ring's ability to contain the intense heat of the shuttle's solid-fuel boosters, Feynman immersed a piece of the material in a glass of ice water on the hearing-room table -- showing simply and clearly that the ring
had lost its ability to flex on the cold January morning of the Challenger's launch.
"Feynman," commission chair William Rogers is reported to have whispered to a colleague, "is becoming a real pain."

This Mr. Wizard Goes to Washington performance nicely summed up the public
Richard Feynman: genius, rule-breaker, simplifier of the seemingly complex.
And this was a guy who knew from complex. Winner of the 1965 Nobel Prize
in physics for his work in reconstructing the theory of quantum
electrodynamics, Feynman was recruited to the Manhattan Project while he
was still in his early 20s. But unlike most people with intimate knowledge
of subatomic particles, Feynman could function and communicate in the world
of large, everyday objects.

"The Pleasure of Finding Things Out," a new gathering of Feynman pieces, is as
illuminating, pleasurable and frustrating as the scientist himself.
Subtitled "The Best Short Works of Richard Feynman," the book presents a
baker's dozen pieces culled from a career's worth of lectures, reports,
interviews and articles. Feynman discourses on the philosophy of science,
the relationship of science to religion and the world of the top-secret
Los Alamos lab. The collection also gives us Feynman's prescient looks at
"the future" that has become our present, seen most strongly in his
groundbreaking 1959 Cal Tech lecture on the possibilities of
miniaturization. Reading Feynman's Cal Tech musings on possible ways to
build tiny electrical circuits makes you feel you are witnessing the
birth of the silicon chip, and you pretty much are. Just as affecting in
different ways are his descriptions of his father -- who encouraged Feynman's
boyish scientific curiosity with "no pressure, just lovely interesting
discussions" -- and an account of the physicist's deep despair after the
product of interesting discussions at Los Alamos had twice been dropped on
Japan.

Feynman was a world-class talker who seemingly had little time or patience
for mundane rewrite work. So a large portion of this book consists of
spoken-word transcriptions that could have benefited from the clarifying
process of editing. Quite a few have already been edited,
in fact, and appeared some years ago, polished up in two as-told-to books: "Surely You're Joking, Mr. Feynman!" and "What Do You Care What Other People Think?" To say Feynman needed an editor may be heresy to his disciples, who rival Bucky Fullerites in their level of devotion. But I'd hazard a guess that the man himself would be pleased to know, 11 years after his death, that he's still capable of being both a pain and a pleasure, and much more the latter.