A deliciously gossipy group biography of the surrealists. 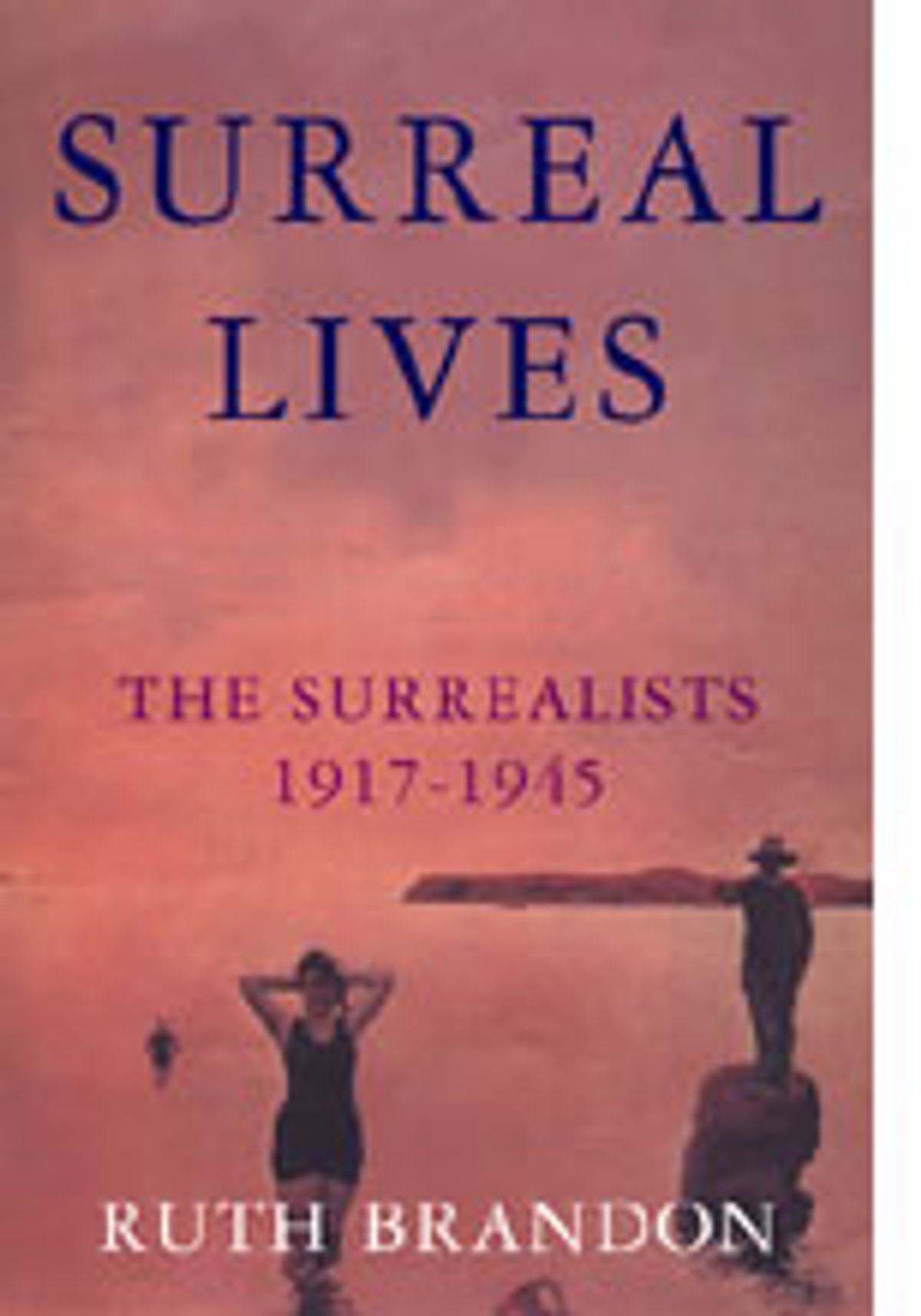 Of all the 20th century's art movements, surrealism has most obviously
percolated through to mass culture. Disney has recently announced that it will
re-use 18 seconds of original animation by Salvador Dalm from the '40s, a time
when Dalm himself rather rashly hoped Disney films would internationalize his
"paranoiac-critical method." But even the Disney of today poses little danger of
domesticating surrealism. Dalm himself wanted surrealism to pass into America's
bloodstream like an "infekzious poizun" (as he spelled it), and indeed, with its
gallows humor and its cynical aggression, surrealism has become an invisibly
dispersed mental habit too ubiquitous to even notice.

All in all, this is what surrealism's founders, Andri Breton and Louis Aragon,
wanted. Theirs was to be a revolution not of works and acts but of the interior
life: Their heroes were dandies, recluses, iconoclasts. To them, surrealism was not
so much a means of mass-producing art as it was a war zone, played out in the
aestheticized and hysterical domain of male friendship. It was a game of liaisons
dangereuses among intricate egos -- or among "a bunch of pederasts," as some
sneered.

It's appropriate, then, that "Surreal Lives," a group biography by social
historian Ruth Brandon, is deliciously gossipy, an informal encyclopedia of
surrealism's endless personal intrigues and factional falling-outs. For this coterie
of lustrous young men, friendships, infatuations and loves were artistic material --
the volcanic, remorseless stuff of the unconscious. Personal seduction, Brandon
makes us aware, was a supreme value for these groomed, snobbish sons of the
French bourgeoisie. They may have thought beauty to be a detestable quality in,
say, a painting, but it loomed large in the enigmatic charisma of individuals. Of
Aragon, who owned 200 ties, Breton sighed, "He is so handsome, you cannot
believe." Waiting for the arrival of the 22-year-old Tristan Tzara in Paris, Breton
and the salacious Nancy Cunard were in a quasi-sexual ecstasy of apprehension.
Tzara himself, the prodigy of Dada, stage-managed his entrance so that his
glimmering eyes and delicate hands would be noticed. (Breton, however, was
disappointed.)

To say that the surrealists were dandies is to remember the deeper resonances of
that word -- the dandy as stylistic and sexual rebel. They loved the occult, the
mysterious elegance of coincidences. Indeed, Breton was almost more obsessed by
the color green than he was by entering any pantheon: The tint had to be
added to all his drinks (except, of course, the occasional Burgundy). Their
contempt was directed at all careerists, especially novelists and journalists -- a
voluntary austerity much criticized by Dalm's avaricious wife, Gala. Yet Breton
exulted in all kinds of people -- his generous admiration ranged over the taurine
Picasso, the lordly Francis Picabia, the hilariously gnomic Marcel Duchamp, the
elfin Dalm and the poet Robert Desnos, who would fall asleep in restaurants and
begin spontaneously uttering from the oracular unconscious.

In Brandon's telling, Breton was especially haunted by one adolescent provocateur, his
red-haired wartime comrade Jacques Vachi, who affected an English accent and
appeared at the opening night of Apollinaire's avant-garde play "Les Mamelles de
Tiresias" armed with a revolver, as if about to empty its chamber into the
audience. Breton talked him out of that desperate act, but the strange Vachi
continued to supply for Breton "the continually desired dissonance and isolation,"
as Brandon puts it, that he craved in people. In 1919 Vachi was found dead with
another youth in a hotel room after an opium overdose. "Jacques Vachi," Breton
later wrote, "is the Surrealist in me." He would also say that the ultimate
surrealist act was to walk into the street with a loaded revolver and fire at random:
a touch of pure Vachi.

Surrealism's development was marked by a continual clash between the ordered,
sensitively rational minds of its French controllers, like Breton and Aragon, and the
earthy, anti-rational fanaticism of acolytes who came from "backward" corners
of Europe -- first the Romanian Jew Tzara, then what Brandon calls the
"Andalucian dogs": Dalm and Luis Buquel. By concentrating on personal
chemistries, Brandon brings this out beautifully, showing how a volatile dialectic
bound these two psychic halves of Europe together.

Inside the movement, this powerful clash was played out in personal obsessions.
At first, Breton found Dalm enchanting. He couldn't cross the street without being
led; when he took a train he would huddle terrified by the engine so that he would
"get there quicker." He spoke a bizarre French that nonetheless conveyed ideas of
fluid delicacy. For Breton, Dalm's appearance in Paris in 1929 saved surrealism
from an encroaching sterility. But Dalm came from a medieval country saturated
with violent pathologies, and his surrealism was dangerously total. It is difficult
to imagine the fastidious Breton eating his lover's stools, as Dalm did with Gala's,
and it is equally difficult to imagine Dalm humbling himself before dreary Marxist
orthodoxy, as most of the surrealists were beginning to do. Breaking with Breton,
Dalm declared instead that "Marxism is shit, the last of Christian shit." (This
quality might have endeared him to it, except that it did not issue from his beloved
Gala.)

In a sense, communism was the grave that surrealism buried itself in -- not only
because it imposed a philistine realist aesthetic at odds with surrealism's
deepest instincts, but because it also destroyed the primacy of the erotic
interplays that made surrealism's booming, narcissistic individuals tick. When Dalm unveiled
an armchair studded with glass vials containing milk, Aragon dourly declared that
there were too many children in the world who needed milk and that the armchair
was politically unacceptable. Aragon then took off with Philippe Soupault to the
Soviet Kharkov writers' conference in 1931 and signed a declaration previously
drawn up by the Communist Party in which he effectively renounced his
surrealist past. "Did the Surrealists' support for the Party," Brandon asks, "mean
that their own intellectual activity must be abandoned in pursuit of the good of
the masses?" The answer, alas, was yes.

Brandon makes the claim that in the end it was Buquel alone -- because of his
isolation, his mid-life career failures, his great skepticism -- who carried surrealism
into the post-war years and who made something resembling great work from it.
The antics of "Les Mamelles de Tiresias" flowered half a century later into the
grandly demented rhythms of Buquel's "Discreet Charm of the Bourgeoisie."

But Breton, too, for all his faults, is still a magical figure. His "Union Libre," with
its cascades of terrible and gorgeous animal and mineral images, is perhaps the
greatest love poem in the French language. Who but a surrealist could have written
it? Of this tragic and overlooked figure Brandon concludes, "Along with his hero
Freud, he is one of that select group who defined for our century a new way of
looking at the world."

If surrealism died because it politicized itself crudely, its force was nonetheless
dispersed over new ground. The surrealist expatriation to New York in the '40s
helped create the modern American art scene. Brandon gives us the intriguing
image of Breton imperiously leading Robert Motherwell around New York junk
stores, teaching him which objects were surreal and which were not. An
indefinable transference of spirit took place between the surrealists and the New
York art world. But the group's best, early works show that the surrealists had qualities
rare among their contemporary progeny: erudition, refinement, vast culture, dark
wit, an incorrigible style. The surrealists would have strolled into the Whitney Museum
with a flame-thrower and torched everything in sight.

Lawrence Osborne is the author of "Paris Dreambook" and "The Poisoned Embrace," both published by Vintage. He lives in New York City.