In Paris for our fifth anniversary, all I could think was: What's so seductive about French women? And how can I become one? 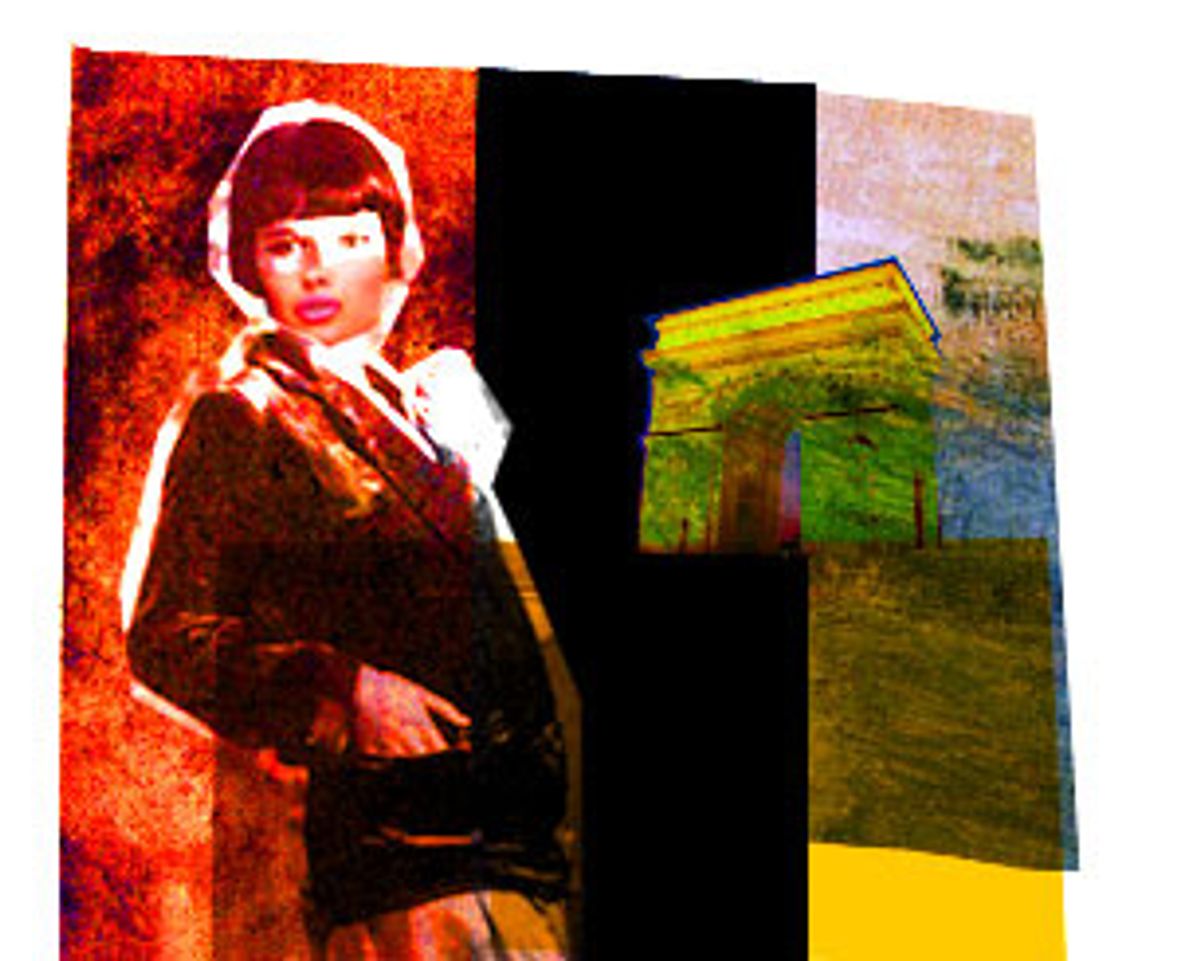 It was the day before my fifth wedding anniversary and I was obsessed with
French women. What was it that made them so, so ... French? Over my cafi crhme I watched a doe-eyed blond part her lips, the color of
young pink strawberries, and sample a minuscule scoop of ice cream
sundae.

She was lovely. And the sundae could have fed four. I decided
she had cellulite. After all, the windows of every pharmacie in Paris were
plastered with posters boasting the miracles of cellulite creme. I looked at
her again -- a sylph.

And what was I? An envious American, who had,
in a week's worth of Paris, consumed a staggering array of food containing
too much fat: baskets of pain au chocolat and butter croissants,
tangy round tartes au citron, chocolate macaroons and crepes -- butter and confiture,
ham, cheese and egg, Nutella and banana. I had eaten these delicacies quickly,
before the guilt could catch up with me, but she, she was clearly savoring
every nibble, in between words and tugs from the handsome lad beside her who was, at
the moment, squeezing her thigh.

"Paquet-cadeau to the left." I raised my eyebrow and looked at my husband. I
had taught him the French term for gift package because I had begun to use
it to describe women who wore extremely tight pants. Only this paquet-cadeau was
male. A handsome young thing in painted-on trousers that left nothing to the
imagination. Nothing.

We continued to survey the daily festival that was the Rue de Buci and watched
as one alluring woman after another strolled by. They were of all ages,
mostly slim. Sometimes they wore perilous heels, sometimes flats. The
collegiate hipsters favored '70s-style pants that flared at the ankles and
chokers that resembled tattoos. The older women preferred high heels and tight
skirts. All of them had panty lines.

Why panty lines? I pondered this question as we strolled, hand in hand, past
the art galleries and bookstalls that line the Seine and wandered over the
Pont-Neuf toward the Marais. Why didn't they go natural or wear thongs?

Just that
morning, I had seen a giant advertisement for thongs on the glass wall of a bus
stop. The entire space of the ad was taken up by a model's larger-than-life,
cunningly formed buttocks. She was in the delicate process of sliding on a
white lace G-string. A schoolboy, jacket flapping, ran past me and slam-dunked
his pastry wrapper into a garbage can, strategically placed below the exquisite
derrihre. "Deux points!" he shouted to his friends, never even glancing at the
ad.

We began to circumnavigate the Ile de la Citi via a sun-splotched cobblestone
street that edged along the Seine and ended at tourist central: Notre Dame.
A gaggle of American women in the plaza clustered around a van
selling souvenirs and soda. I knew they were American because of their
white, marshmallow-shaped gym shoes, their tailored yet ill-fitting clothing.
They were the picture of practicality, with proper straps and cases for their
cameras, overstuffed fanny packs and light windbreakers. I was
reminded of Pilgrims.

We crossed over to the Ile St. Louis and saw a woman carrying a worried-looking Pomeranian. Her dark
hair was bobbed, her face artfully arranged and she wore a chic,
pinstriped men's-style suit, coat and heels. She was an older Louise Brooks, a
woman, as they say, of a certain age. Early 40s? Late 40s? It didn't
matter. She was fascinating, and as she bent down to place her petit chien on the
stones, her suit coat parted slightly and I saw the outline of a bare breast.
She stood up and lit a cigarette; then, cooing to her furry companion,
continued down the street.

I was enchanted. What kind of life did she have? The
possibilities seemed endless.

He said it appreciatively. Maybe too appreciatively, I thought, chewing on
an overstuffed falafel sandwich. We were in the Marais now, in a bustling
Israeli restaurant with American diner decor. The place was hopping, the
falafel delicious. Crunchy. Not greasy. Spicy. Splashed over the walls were photos of actors and fashion models, each enjoying falafel. One of them -- I think it was Amber Valleta -- was
caught mid-bite by the photographer. She still looked ravishing.

My husband reached over and wiped my chin, catching a
dribble of tahini, as a gamin with wide brown eyes and a taut, pierced belly button
dropped off our check. She could have looked boyish, with her lean, athletic
figure, but the purple ribbon that tied back her shoulder-length brown
curls was anything but. That was the thing all
Parisiennes seemed to have in common: They embraced femininity. She moved assuredly from table to table, clearing glasses, taking orders,
making change. She couldn't have been older than 19. I was never that
comfortable in my body at 19. I'm not that comfortable in my body now.

We spent the rest of the day losing ourselves in a maze of streets, and
eventually wound up in the Bastille district. By nightfall the Rue de Lappe --
earlier a hushed alleyway -- had sprung to life. The disco was pumping, dishes
clattering, the chairs of the sidewalk cafes beginning to fill up. I
felt grimy, and was relieved when we agreed to go back to our room. I didn't
feel like being out, particularly among the hip young things of the
Bastille.

We went in search of a decent bottle of red wine and a hunk of Camembert. We
found them, along with last-minute grapes, for $7 at a small grocery store. Now all we needed was a baguette, but baguettes are hard to come by in France after 4
p.m. We finally found one, atop a pile of newspapers in the all-night corner store
across from our hotel in St-Germain-des-Pres.

By 10 p.m., we were sitting cross-legged on our tiny balcony, our little feast
spread between us. We were eye-level with the rooftops of Paris. Down below,
the store owner's daughter skipped beneath the street lamp. Across the
street, an elderly woman picked her way around her rooftop garden, carefully
watering her roses and peonies. The night was quiet. My head was spinning a
little from the wine when my husband got up and climbed back through the window
to get something inside.

He returned with a diamond ring, an antique. It was heavy. Platinum. The
setting was square, art deco in design -- very, very feminine. I
hated to cry, but what else do you do when you realize that you are the luckiest girl in
the world? Here we were, getting engaged, five years after we eloped. Ten
years after we moved in together. And 11 years after we met. It was
perfect.

The next morning, as we strolled
past a shaded boules court in the Luxembourg Gardens, a group of teenage girls stopped us and asked me a question in rapid-fire
French. I couldn't believe it; they actually mistook me for a Parisienne. I
had them fooled until I opened my mouth and butchered their language.

Later we napped on our sun-drenched bed. I woke first and lay there,
still wondering about French women. It wasn't simply beauty. The world was
full of lookers. It couldn't be physique. You could see more sculpted bodies
on any given day in Los Angeles. And it wasn't their style, although I found
the Parisian combination of the conservative and the sexy
irresistible. It was the way they wore their clothes. Confidently, but not
brazenly. Comfortably. These women were nonchalant. They were themselves.

My partner was still sleeping. I decided to surprise him
with his favorite French food: tarte au citron. And flowers. I pulled on a dress and
flats and headed out the door, grabbing a sweater just in case. I didn't need
it. Summer had officially arrived on the Rue Vavin. I found a patisserie and
bought a small, personal-sized tarte. The rotund baker, his blue eyes
twinkling, handed it to me with a flourish.

Back on the street, I suddenly realized that this was my first time alone in Paris.
What would life be like if we lived here? I fantasized about living
in a flat near the Place de la Bastille, really learning the language.

I arrived at a bustling intersection of cafes. I passed a table of men wearing dark
sunglasses and felt their eyes on me. Why were they staring?
Was my dress too short? I tugged at it. Another cafe. More stares. I pulled
on my sweater and quickened my pace. The sun was beating down; I was beginning
to sweat. I passed a table of young girls. They were staring, too. That made
me feel better, and I laughed out loud when I realized what a hypocrite I was:
I stared -- stared blatantly -- every time I sat at a cafe. I even pointed out
paquet-cadeau! I glanced back at the cafes. They were set up like every
French cafe I had ever seen -- chairs side by side, facing out to the street, so
every patron could get a clear view of the parade. I was just part of the
parade. But I preferred to be an observer.

At last -- a flower stand. I bought two dozen red roses. No one paid any
attention to me. Good. I headed back the way I came. There were the cafes to
pass again, and I hurried by, eyes on the ground. I was almost home, back to
the sunny room with the yellow flowered wallpaper. And my favorite paquet-cadeau.

I ducked into a small market for a bottle of water. It was dark and cool
inside.

"Cinq francs," said the cashier. I handed him the money. He was young, 20
or so, dark and good-looking. I took the water and turned to leave.

I looked at him. He was putting the money in the register.

He switched to perfect English, but never looked up. "You are very beautiful,
miss."

I felt my face flush. I didn't know what to say.

He nodded. I scurried out and thought how bizarre. Since I was 13
years old, I, like every other woman I knew, had been the recipient of
whistles, crude propositions, weird grunts, clicks and kissy sounds from total
strangers. I had never felt complimented.

I sailed along the street. I didn't care who was looking, who wasn't looking.
I felt great, I realized. I felt complimented. I felt French.