How three hard-boiled writers have retooled the mystery novel for women. 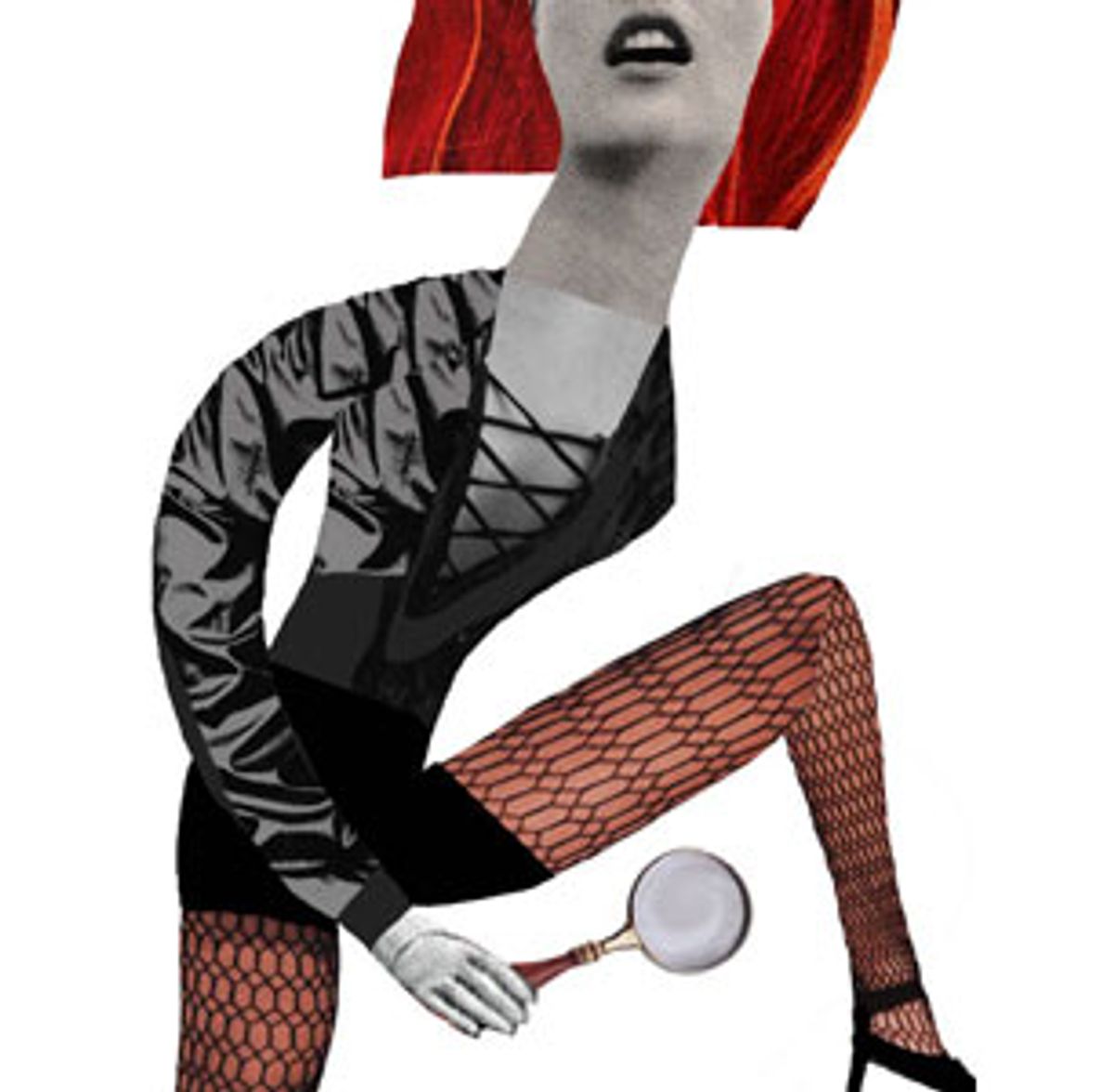 In the early '80s, when women began to refashion the hard-boiled detective novel using female private eyes, anticipated difficulties such as gender differences in strength and aggressiveness proved to be chimeras. To make their brawls more believable, these heroines were given workout schedules more appropriate to Olympic athletes (as if Philip Marlowe would have been caught dead in a gym); nowadays people seem to believe that given enough training, anyone can do anything.

It was harder to deal with the femme fatale of the tradition -- you know, the blond with the diamonds in her eyes and the pearl-handled revolver in the top of her stocking. Chandler and Hammett believed in her absolutely. She usually turns out to be the murderer. Even if she doesn't, she is corrupt, vile  and enthralling. It is in her persona that the form's ambivalence toward evil is lodged, and this ambivalence still gives the form its unshakable power. Without it, the detective novel is just a lot of empty suits holding guns.

Sara Paretsky, one of the earliest and most successful of the refashioners, went looking for a substitute and found a similar inner tension in class anger. Class consciousness has always been a subliminal part of the male detective novel; the femme fatale, for instance, is often rich. But Paretsky makes politics the focus of her V.I. Warshawski novels, the latest of which, "Hard Time," has some of the most blood-boiling scenes of injustice I've ever read.

Driving home from a publicity event staged by one of those behemoth entertainment corporations, Warshawski nearly runs into a gravely injured woman lying in the middle of the street. The next morning, a cop named Lemour, a masterpiece of insinuation and bullying, wants to arrest her for manslaughter; the Breathalyzer test that previously absolved her doesn't seem to have made it into the police report.

Warshawski's smart mouth is equal to the situation at first, but Paretsky keeps upping the ante. When Lemour trashes Warshawski's office looking for (planted) drugs, we start to feel her humiliation. By the time we get to the highly charged jail scenes, Paretsky has moved beyond tough-guy repartee and into soul-destroying, Dostoevsky-like territory. (I notice that the most compelling scenes in Tom Wolfe's "A Man in Full" are also set in prison -- a fact that, I suspect, is more than coincidence and says something about how we feel in our '90s prosperity.)

Paretsky deftly cuts in and out from these raw scenes to subtler characters and situations, so the non-blood-boiling sections move along nicely as well. An entertainment lawyer (and ex-radical) tries to buy off Warshawski. An immigrant Arab woman tells of protecting a Filipino girl from possible INS agents by claiming to be her grandmother. A "pool mother," so horrifying that she is just this side of hilarious, forces her kids into competitive swimming. If the mystery itself turns out to have a bewildering number of facets, they only reflect the liveliness and vividness of the larger plot.

Despite the saintliness of some of the immigrant characters and the villainy of the pack of rich white males who are the real power behind Lemour and the prison guards, "Hard Time" is not an uncomplicated book. Warshawski feels the pull of the other side. She covets nice sports cars. She is jealous of the entertainment lawyer. She is afraid that all her friends are right when they tell her she is making trouble pointlessly. And if she herself tries to master every situation, then the reader can't help wondering how can power be inherently evil. Paretsky occasionally let politics get a stranglehold on her past books, but she doesn't in this one. "Hard Time" is exactly what suspense should be.

Sue Grafton, another early refashioner, has simply shorn the detective novel of anything that doesn't suit a female heroine, and as a result there is something crabbed and limited about her mysteries. Kinsey Millhone, the detective of her alphabetical series, is a bit like one of those sexless best friends once played by Eve Arden in the movies -- only now she is center stage, and her role hasn't really been beefed up any. Still, the character has her strengths. She is likable, sardonic and predictable. "'O' Is for Outlaw" is unusual among the series only in that it deals with Millhone's first husband, a former cop; Millhone is, as a rule, as tight-lipped about herself as any male P.I.

Millhone learns that years ago, on the night when her ex was suspected of beating a man to death, he was actually in bed with another woman. This femme fatale sounds like a cross between a teenage hooker and an ad for a diet aid:

Dixie was about my height, rail thin, with a long, narrow face and an untidy tangle of auburn hair halfway down her back. Her brows were plucked, a wispy pair of arches that fanned out like wings from the bridge of her nose. Her eyes were darkly charcoaled and she wore a fringe of fake lashes that made her eyes jump from her face. She was usually braless under her tee shirt and she wore miniskirts so short she could hardly sit down.

This description shows disapproval, I guess, but it's so bloodless that Dixie might as well have cut in front of Millhone in line.

This same lack of passion rules throughout. The plot jogs along, dutifully touching on drugs, a shady bar and the questionable pasts of some rich people. Millhone's -- and Grafton's -- concerns are not large. But heroine and writer share an underlying decency, and I think their commercial success tells us good things about our society. We really do like to imagine a wiseacre woman doing a competent job in an uncluttered fashion.

In the first several pages of "Lost Daughters," the latest Micky Knight mystery, J.M. Redmann uses the words "love" and "lover" a dozen times. Knight is in a very supportive lesbian relationship, as are most of her friends. First we get her anniversary party -- at length -- then a whole slew of her mean relatives at a funeral. (Unfortunately for the reader, the uncle died from natural causes.) In fact, the corpses that start popping up later seem mainly to be excuses for Knight, her lover and their friends to say nice things to one another. There is a femme fatale, but Knight is so faithful that both women might as well be made of wood. And that's just as well. Knight is better off sticking with her rich doctor lover, if this book is any sign of her detective skills.

In each of the three novels I've mentioned, the heroine breaks into a house. An unhappy child Warshawski befriended gives her the information she needs to circumvent a security system. Millhone slithers through a pet door. You could say that both of these stratagems are female versions of the old credit-card-springing-the-lock trick. But the house Knight breaks into is her aunt and uncle's, where she lived as a child. All she has to do is retrieve the key from under the edging stone in the back yard. Somehow, I don't really think that counts.

Redmann's whole reconception is sweet in its own way. Early on she describes sharing things, from spices to drills, with a gay male couple across the street: "Contrary to conventional wisdom, they had the drill and we had the spices." It's as if Micky is so butch she doesn't have to prove herself the way her heterosexual compeers do. (She doesn't wear you out by describing her exercise routine, for instance.) Of course, this freedom also seems to mean Redmann doesn't feel she has to provide a plot.

At one point, Knight poses as a pollster. To stress the confidentiality of the poll, she says, "This is for social science research and will only be published in academic journals. It'll be so full of statistics and dry academic language that not even people who are interested in this kind of stuff will read it." I found this assurance hilarious, but that may be because I had just finished reading a scholarly book called "Detective Agency: Women Reinventing the Hard-Boiled Tradition," by Priscilla L. Walton and Manina Jones.

The problem with "Detective Agency" is not actual dryness so much as incorrigible silliness. Walton and Jones' main interest is political -- or what passes as political these days. (The word "hegemony," for instance, rears its ugly head.) At the same time, they make much of the professional nature of the new female P.I.s' interest in crime solving; charging a fee for services rendered is considered a liberating act.

Walton and Jones do round up many interesting tidbits from other sources. Here is Sara Paretsky describing her first, unsuccessful attempt at the genre: "I had my detective, her name was Minerva Daniels, and she was in this office down to her last two dollars, and this guy comes in -- slim hips, broad shoulders -- and he was going to be my main bad guy " So much for the homme fatale.

Unfortunately, much of the commentary is more a swarm of words than a reasoned disquisition. The authors seem to be stunned by puns: " the text implies that with the solving of the mystery, a dis-solving of rigid heterosexuality has taken place." Slashes are also big, as in "voyeuristic eye/I" and "dis/position." I'm sure that Warshawski, Millhone and Knight, straight talkers all, would be baffled.