Sunil Paul, CEO of Brightmail, explains what it takes to be a two-time winner in the Internet economy. 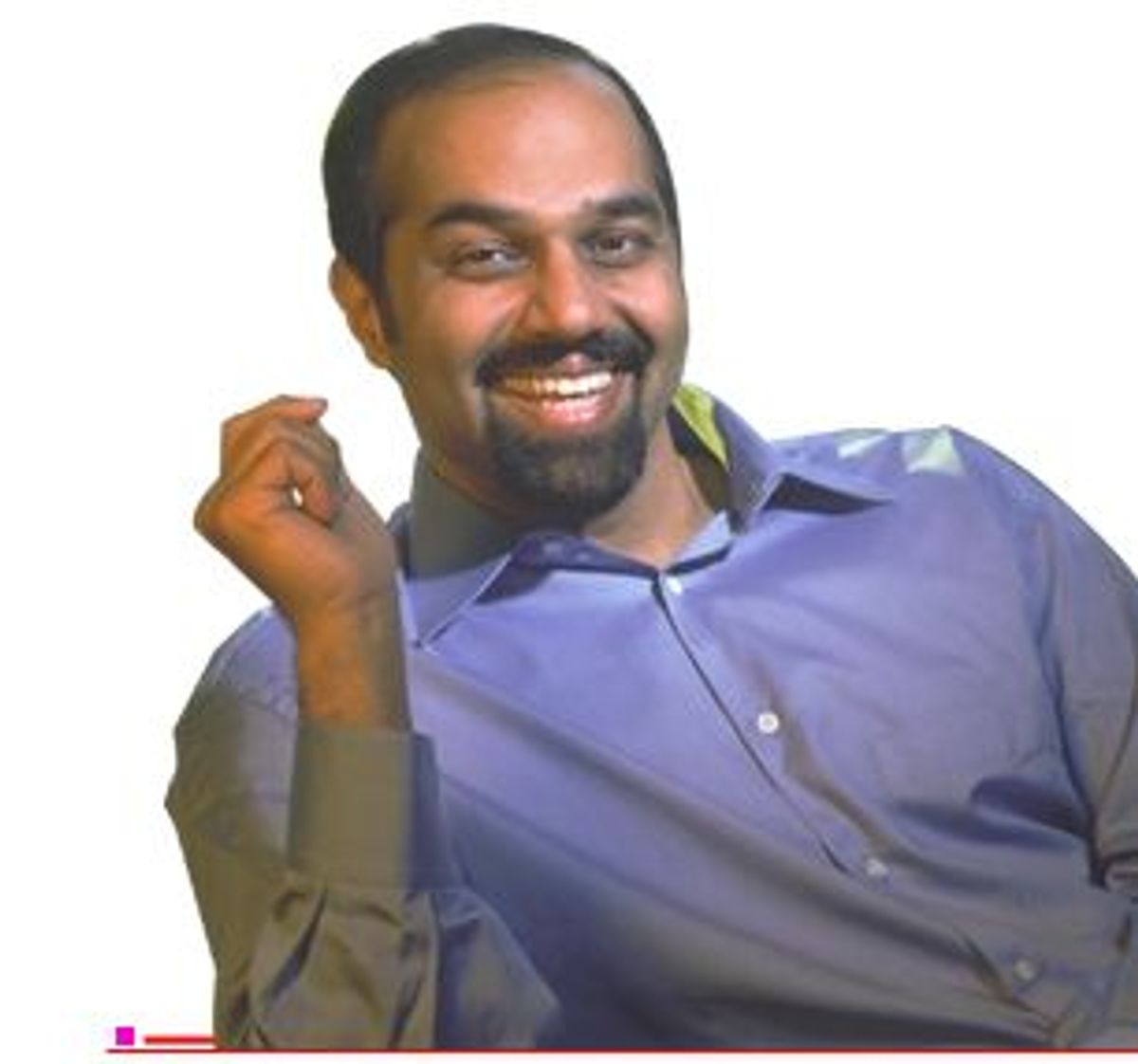 In June 1996, Sunil Paul and his partner Mark Pincus cleared $38 million from the sale of their pioneering "push media" company, FreeLoader. In a way, it was a seminal Internet moment -- FreeLoader wasn't even a year old and had never generated a dime in profit, but little details like that just didn't matter in the new economy of the Net. So what if the stock price of the new parent company soon plunged, or if FreeLoader itself was closed down less than a year later? For Sunil Paul, a one-time Internet product manager for America Online, the experience was fruitful -- and a springboard for his second venture, Brightmail.

FreeLoader specialized in a product designed to push information at you -- it was a program that downloaded content from the Net while you weren't at your computer. Brightmail, ironically, aims to do the exact opposite. Brightmail's mandate is to fight spam -- to keep information you don't want from getting into your computer by filtering it out of daily mail traffic. Paul's transition from push to anti-push is a neat little metaphor for how our relationship to the Internet has changed over the past few years, but that's not the only reason we should pay attention to him. Internet start-up entrepreneurs are a dime a dozen these days, and many of them come off as fairly wet behind the ears, fresh from posh business schools where they seem to have excelled mainly in courses that could have been titled "How to pitch vaporware to a venture capitalist" or "Six easy ways to convince the press to cover your company." Paul is young, still only 34 years old, but already he has a track record of involvement with the commercialization of the Net that few others can match.

Which is not to say that his patter isn't as slick as the next CEO, business school-trained or not. Paul started out as an electrical engineer, but he speaks with the smooth confidence of someone who has honed his persuasive skills through countless money-raising sessions and marketing campaigns. If there's one theme that runs through both FreeLoader and Brightmail, it's that Paul's companies know how to get press. The craze over push media may be long gone and nearly forgotten, but it's hard to imagine anything on the Net that aggravates the general public more than e-mail spam. A company that fights the plague of junk e-mail is an obvious marketer's dream -- Sunil Paul placed his second round of start-up cash on what looks to be a pretty good horse. Last week, he talked with Salon Technology about his experiences steering two companies through the fast-moving waters of the Net.

Your career over the last five years has captured every up and down in the Internet economy. What's it been like to be part of this thrill ride?

It's definitely been a roller coaster. Everybody talks about how the Internet bubble is going to burst, but the truth is that it has already burst many times. It all came tumbling down in the fall of 1995 and also in the fall of 1997.

And even before that. As far back as 1994, when you were at AOL, the consensus of many people covering the Internet was that AOL was going to get wiped out by the Net -- that AOL didn't get the Net at all.

I was on the inside thinking the same thing -- we've got to get our act together! But we did -- AOL successfully incorporated the Internet into what it was doing, and made it a clean and easy experience. Certainly that was what I was advocating.

Why did you leave AOL?

I left because I had great ambition and desire to be an entrepreneur. It was more of an emotional decision than it was a financial decision. On the emotional criteria it was a huge success. On the financial side it was probably a break even. I would have done very well if I'd stayed there.

Push media seems such ancient history these days. Can you give me a sense of how the competitive environment for an Internet start-up has changed since those early days?

The noise level has gone up a huge factor. There are so many other companies out there that are doing Internet-related things -- either existing companies that are waking up to the realities of the Internet, or just other start-ups. It used to be, when we started FreeLoader, that everything from getting visibility in the press to getting visibility among prospective investors or employers was easy. There just weren't as many Internet companies around. That's maybe the downside.

But there's definitely some upside too: Everybody knows about the Internet now; you no longer have to educate people about what e-mail is and what it can do. That's a big advantage -- the story has moved from being one that is kind of techie-focused to one that is a general consumer story or a general business story. So, for example, in the case of spam, we no longer have to pitch purely to the technical press. The general consumer press is interested in the topic because it's something that affects almost everyone.

When you started FreeLoader, you and your partner fit the classic start-up entrepreneur scenario. You maxed out your credit cards, worked out of your homes, and so on. What's it been like the second time around?

It's been a hell of a lot easier. You don't have to bang against the credit limits of your credit card anymore. I think the big difference is the ability to hit the ground running -- you don't have to worry about going into debt, and you don't have to worry about immediately turning around and raising money. I put several hundred thousand dollars into the company in the beginning and I still had a number of people join me early on who either worked without salary for a period of time for more equity in the company, or at a reduced salary for a fairly long period of time for, again, more equity. What that let me do was get the company further along before having to raise money -- I was able to hold on to it for a little bit longer than I would have been able to otherwise.

Are there specific lessons that you learned from FreeLoader that you applied to Brightmail?

Yes. There's a technology lesson -- deploying and maintaining client software [software that is installed on individual users' machines] is really hard. There is also a lesson in the desirability of finding a real problem, a real need, and satisfying it. Finding a need is a more straightforward job than inventing a need. It's a tricky balancing act though, because there's always a little bit of creation of need involved: At the same as you address a new problem, you are creating new opportunities. Brightmail is out to do both -- our initial products are aimed at solving a very obvious problem. But future products will address the opportunities that we create by solving that problem.

Can you talk more about those future products?

Unfortunately we're not really ready to talk right now about future products. But they are all oriented toward improving e-mail, making e-mail a more useful medium than it already is. The overall strategy of the company is to introduce spam control and use that as a beginning for many other services in the same way as other companies like Yahoo and Netscape and Amazon used their first very simple product -- a directory, a browser, book sales -- as a way to build up the market, build a brand name, build awareness, and then layer other products on top of that.

You say that one of the things you've learned is that deploying client software is really difficult. With Brightmail, you are primarily targeting Internet service providers as customers for your software. Are ISPs a big-enough market for striking it rich?

In the spam business? We know that spam is a real problem and it costs a lot of money for ISPs and corporations. We estimate something like a billion dollars a year is lost due to spam. A one-million-person ISP will typically lose about $7.7 million a year because of spam. Is that opportunity big? Yes. Is it capped? Yes also -- but between here and that capped opportunity is a lot of revenue. We see an opportunity to go grab a pretty reasonable, healthy stake of revenue, and create a core business big enough to build a lot of relationships.

And then leverage those relationships with your new products?

That's an interesting question. It would take a massive coordination, and while the Internet helps coordination in an asynchronous mode, its pretty hard to do in a synchronous mode. Part of the value that open-source software companies like Red Hat offer is that they add a layer of support on top of this asynchronous coordination of writing software. Similarly, what we basically do is that kind of support. We are the ones that are accountable, we're the ones that are writing the spam-filtering "rules" on a minute-by-minute basis -- and it's expensive to run a 24-7 operation like ours. It would be pretty difficult to do what we do in an open-source manner.

There's a saying in Silicon Valley these days that there is no shame in being involved in a failed start-up -- on the contrary, I've heard it said that venture capitalists look favorably on entrepreneurs who've failed a few times -- they are supposed to have learned from their mistakes and have a better idea of what it takes to succeed. It's hard to know whether to call FreeLoader a success or failure -- you certainly picked up a nice chunk of change, but the company itself was closed down and the product doesn't exist. Did that help you or hurt you the second time around? Is it true that failure looks good on a Silicon Valley risumi?

I don't know. It's true and it's untrue. I've heard people say that -- but there's a difference to pay attention to. Did you try with gusto? Or did you just whimper along? I see lots of companies and I interview people who just sort of puttered along and didn't really go for it, and I don't think anybody respects that. I guess if they end up being a big success people respect that. But what people really like to see -- and by people I mean investors and employees and people you're doing a joint effort with -- is that you are willing to swing for the fences. If you don't quite get there or if you struck out once before, that isn't necessarily such a terrible sign.