A sworn enemy of novelistic pain relief takes a jittery poke at American kitsch and credulousness. 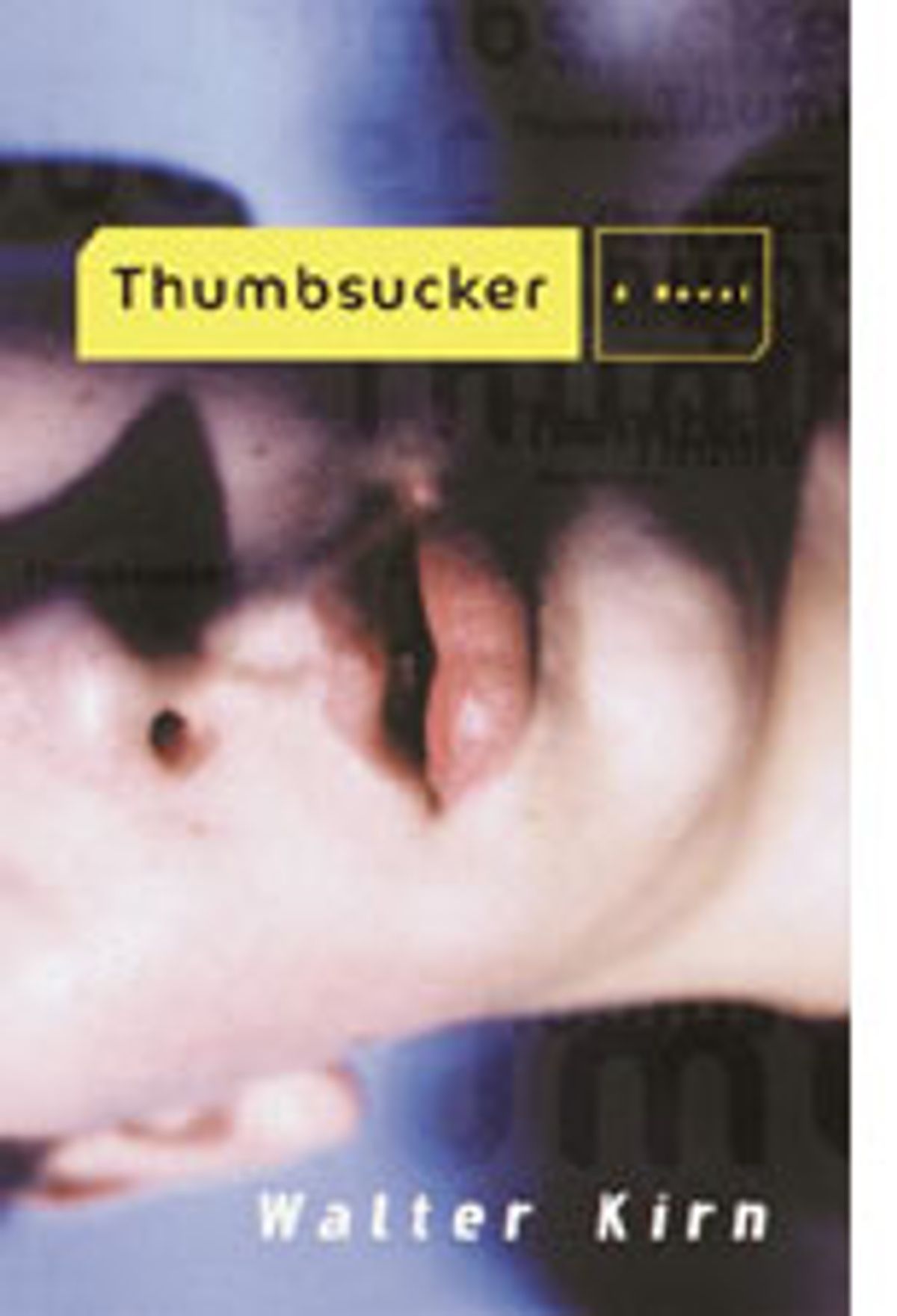 Not many American writers any longer know how to mix up a nice sour cocktail the way they used to. Novels these days are more the sort of drinks you sip by the pool: heavy on the fruit juice and syrup. But in "Thumbsucker," Walter Kirn serves a strong glassful of bitters and wry.

"Thumbsucker" might be called a coming-of-age story, but it is not, thank God, at much risk of becoming a candidate for Oprah's Book Club. Unlike the narrators of standard-issue tales of adolescent angst and self-loathing, Kirn's downy-cheeked hero never outgrows his awkwardness, solipsism and ingrown strangeness. Instead, he nurtures them tenderly, like exotic pets in a secret terrarium.

And Justin Cobb's neuroses are more exotic than most. He is, as his dentist calls him, "the King Kong of oral obsessives," a teenager who half-involuntarily still sucks his thumb. "It was the one thing I'd always done," he explains. "Even breathing did not go back to the womb. Being part of a circle of shoulder, arm, hand, mouth, connected me to myself." When Justin kicks this habit -- if only temporarily -- his fixation finds other outlets: cigarettes, alcohol, pills, the school debate team ("an experiment in concentrating on what came out of my mouth instead of what went into it"), fly-fishing.

The circularity of Justin's thumb and mouth and arm reflects the circularity of "Thumbsucker" itself. This is a book that rejects the idea of growing up, of progress, of the transforming power of therapy and family bonding -- all the old American verities. As a book critic for New York magazine, Kirn is a sworn enemy of the anodyne, and in his own fiction he puts his money where his mouth is. The Cobb family as he portrays it manages to be both sympathetic and pathetic, each member with his or her own hoard of tics and eccentricities to match Justin's.

But Kirn's most memorable characters are his bit players. Structurally, "Thumbsucker" is an old-fashioned episodic novel. Like "Huckleberry Finn" (an even darker and more pessimistic book), it relates a young man's journey among a ragged job lot of charlatans and hucksters, each offering the hero his own dubious wisdom. In place of the Duke and the King, Kirn offers a sexually frustrated debate coach ("You can't just bob and weave your way through life. Fakes get found out. At bottom, the world is fair"), a dishonest gas-station owner ("Success is like sailing: sit back and catch the wind") and, best of all, Justin's oily and slightly sinister dentist, Perry Lyman ("The psyche is formed in the bassinet, the stroller. A cat drops a chewed mouse inside your crib and at seventeen you're a hand-washing fanatic").

"Thumbsucker" is set in Minnesota in the dreariest days of the Reagan era, and its period details are perfect. (An acid-dropping, nihilistic attendant at the gas station where Justin works wears "one of those T-shirts  that show the anatomy of the human body: all the muscles, bones, and organs in their actual colors.") And as in "Huckleberry Finn," the book's humor redeems its mouth-puckering sourness. The last chapters -- in which the Cobb family converts to Mormonism, which Kirn portrays as a kind of exaggerated version of American kitsch and credulousness -- are especially Twainian. Justin goes on a church-sponsored trip to the "Garden of Eden" (in Missouri) and considers burning the place down.

Like Justin Cobb himself, Kirn's novel is jittery, unsettled, wired with hyperactive energy. And like all interesting adolescents, it's capable of melancholy seriousness and manic humor, often in the very same thought.

Adam Goodheart is a columnist for Civilization magazine and a member of the editorial board of the American Scholar. He lives in Washington.