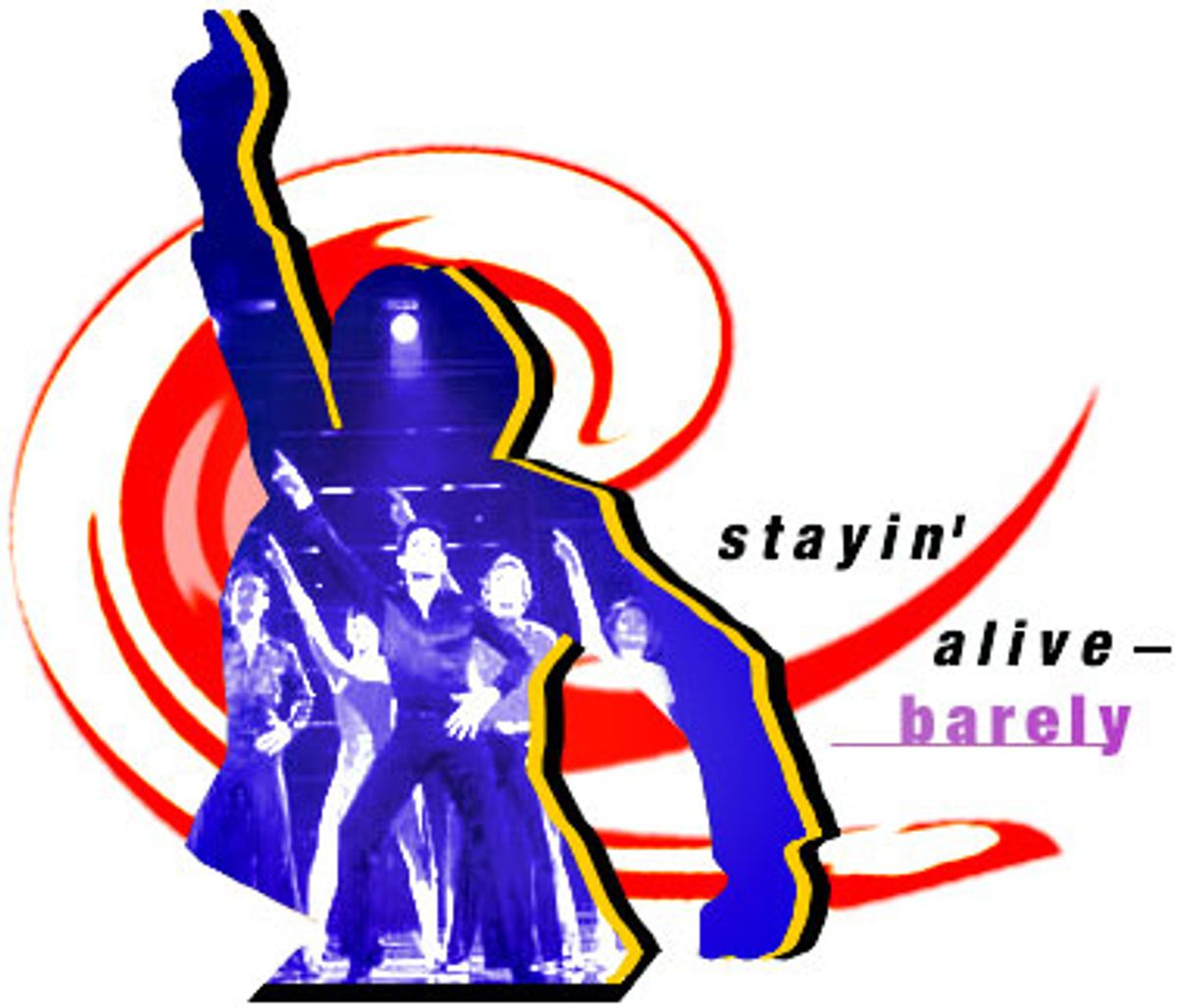 You might remember this scene from "Saturday Night Fever," the movie. Tony Manero has brought his brother, the defrocked priest, out to the disco, and Bobby C -- the sad little guy who's always trying to get Tony's attention --- starts orbiting the brother like a satellite. "Hey, Fadda!" Bobby C jokes, "I know this girl who's so religious ... she says she likes the taste of communion wafers!" In the movie, the line is supposed to be the opposite of witty, and it's designed to make you vaguely uncomfortable. It plunks flat on the ground, showing what an uneasy, attention-starved character Bobby C is, even when he thinks he's coming off all easy and jocular.

"Saturday Night Fever" is a complex, ambivalent movie. Bobby, the weakest of Tony's crowd, ends up jumping off a bridge. And following his death, Tony -- the scales having fallen from his eyes -- abandons his surviving weak friends and family to their fates in Brooklyn, and journeys to Manhattan to start a new life. When the movie ends, both Tony and the audience still have a lot to think about.

But in the new Broadway musical -- yuk, yuk -- that "communion wafers" line is played for a laugh. The Minskoff Theatre was packed on Thursday night with the classic Broadway show-going audience: Westchester dentists and their molls; Long Island secretaries and their dates; overstimulated provincial families from all over the civilized world, and also from New Jersey (like this reviewer). And in front of this crowd, with a script stripped of all nuance and roistered up with song-and-dance acts, "Saturday Night Fever" was "Grease" with a funky beat -- "I Remember Mama" starring the Jets from "West Side Story." When Bobby brayed, in Brooklynese, "Sheez so relidjus ... She sez she likes thuh taste o' commYOONyun wayfuhs!" it was just ... so totally New York! So old naybahood! Leaving aside the tourists, this audience is the Tony Maneros and the Stephanie Manganos of the city -- the bridge-and-tunnel folks who have moved up, leaving their rougher-mannered friends behind. That, as well, leaves a lot to think about -- but more on that anon.

"Saturday Night Fever" began as an article in New York magazine, by Nik Cohn, about real-life Brooklyn guidos (although the characters and events were, it turned out later, invented whole-cloth). When it was made into a movie, the idea was to use Cohn's story as a low-budget vehicle to stir up some national interest in disco -- and specifically to push the disco acts signed to RSO Records. That worked out better than anyone had imagined, but the movie ended up being pretty weirdly good, considering its origins.

It was possible in the '70s to make a good movie by accident, since the filmmaking infrastructure at the time was staffed with old-line craftsmen who tended to script and shoot tightly, purely by habit. Today, of course, it's hard to make a good movie on purpose; and with big-ticket theater falling ever more under the influence of modern, sucky Hollywood practices (the post-Andrew Lloyd-Webber London theater is to blame for this particular production), it's not surprising that there was something palpably misconceived about "Saturday Night Fever," the play, from the beginning. It resembled the movie's sequel, for one thing -- "Staying Alive," a meretricious, young-Hollywood version of the dream (directed by Sylvester Stallone) that plopped wetly into cinemas in 1983 and slid straight onto videotape. Its central conceit: Tony does Broadway.

When the curtain rose at the Minskoff, the cast came out singing "Stayin' Alive," and doing a big Broadway dance number. The Travolta character, played by one James Carpinello, was done up to look just like the classic goombah Tony, but had the same air of hawk-eyed avidity as the gymmed-out '80s version, who was always running around to auditions trying to "make it" and "get something going."

When the all-singing, all-dancing hubbub died down and the dialogue started to fly back and forth, the actors played their characters just exactly like in the first movie -- only without nuance, and with the quirks ratcheted up about four notches for effect, like in the second. The tacky-wacky costumes were exaggerated just so for added hip panache.

People were breaking into song at every possible juncture. Imagine Yvonne Elliman's "If I Can't Have You" reworked as a show-stopper ballad, and K.C. and the Sunshine Band's "Boogie Shoes" as performed in chorus by the "Solid Gold" dancers. "'Saturday Night Fever' isn't about the story at all!" somebody must have brainstormed after a long evening sniffing a mirror in the early-'80s: "It's about the dancing!" Well, great. This time, it's about the singing. Has crack taken over London?

In essence, the show is too ingratiating. It's trying to be so relentlessly entertaining, in so many ways at once, that it can't keep out of its own way. When a disco spaceship takes off from the stage, apropos of pretty much nothing, it's clear that Broadway, which has long since escaped the bounds of taste and reason, has at last gone beyond parody.

Tony and his friends were, at one point, wearing harnesses as they danced around on top of a high set. And if they had crouched in unison and launched themselves into a swooping Peter Pan arc over the heads of the audience, then hey! That's entertainment! If the whole cast had filed onstage doing a Riverdance, and set to work putting on a circus-within-a-play featuring live elephants and a tightrope "Stomp" routine, then hey! Actually, they did do a "Stomp" routine. See? Beyond parody.

But it was really that line about the communion wafers that gave away the game. The show itself has no idea that the line wasn't supposed to be funny -- so the audience chuckled at it, and at the other lines like it, and at the funky disco clothes, and the semi-ironic guido mummery, and the campy dancing.

When the cast assembled at the finale and did a choreographed vamp of the finger-in-the-air pose, the audience applauded. And so the players did it again. And when the DJ character exhorted the audience to dance in their seats along with the cast -- which they didn't -- the crowd applauded that too.

"That's not Tony Manero up there in that white suit at all!" they should have chuckled. "We're Tony Manero! The entire show is Bobby C, capering and prancing and trying to get our attention all the time!" And so it was. You might remember the scene from the movie where Bobby C, hopeless and ruined, jumps off the Verrazano Bridge. That would've been a splendid grand finale, with each character holding his nose and doing a cannonball off the parapets. And then the director, the choreographer ...

But the real Bobby Cs of Brooklyn and the world probably wouldn't appreciate the humor of it. We all like to think we're Tony, but maybe we aren't. Even the uneasy, shrimpy guy thinks he could be Tony, until he goes and jumps off a bridge. That's what the original movie has, and this bilge doesn't. Blame it all, as the Bee Gees song goes, on the nights on Broadway.