Chris O'Donnell and Renie Zellweger face off in a tale that sets love against lucre. 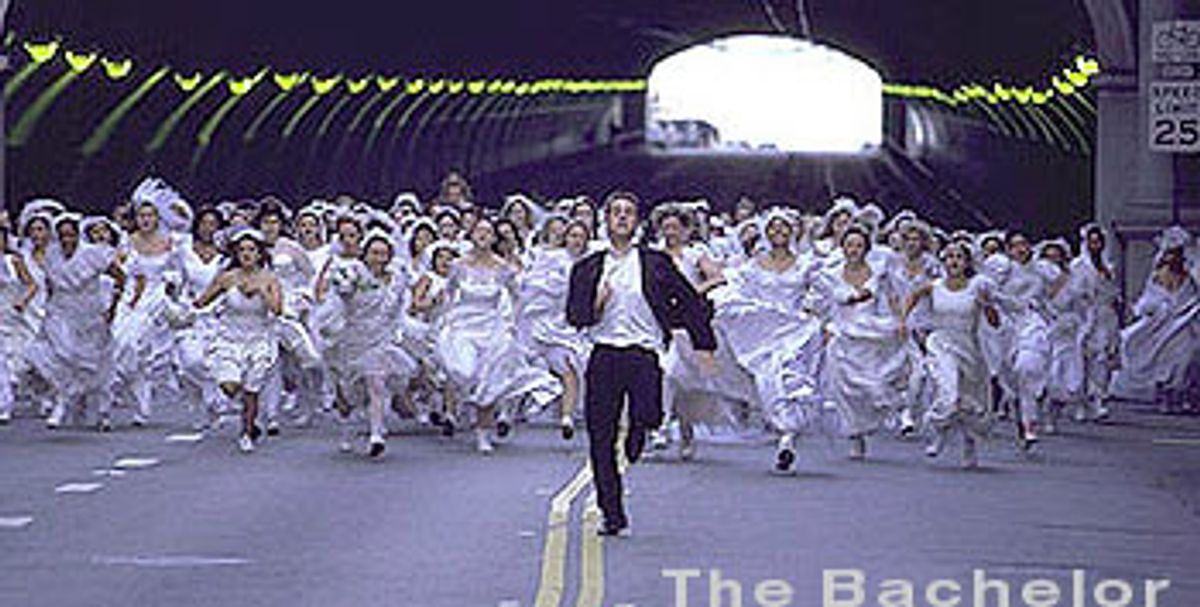 Mother always said that it's just as easy to love a rich man as a poor one. But Mom lied. Most rich guys are old, unpleasant and butt ugly. Give the gold-diggers of the world a millionaire who isn't a total beast, and they'll get a little excited. Screaming, marauding, last-night-of-Woodstock excited, even.

What the would-be brides of "The Bachelor" -- director Gary Sinyor's remake of Buster Keaton's classic "Seven Chances" -- don't know is that the blue-eyed guy on their most-wanted list actually is a beast. When we first meet the eligible, soon-to-be-stinking-rich Jimmie Shannon ("Batman & Robin's" Chris O'Donnell), he has no idea that he's really an uptight preppie. He envisions himself a wild mustang blazing through the open prairie. This, he explains in voice-over, is what men really are: magnificent, spirited creatures who yearn to run free.

But Jimmie's fiercely protected equestrian status is dangerously compromised when he meets Anne ("One True Thing's" Renie Zellweger), a Botticellian paragon of femininity with considerably more hair than personality. She's the perfect girl for Jimmie, a fiesta of vanilla and Velveeta himself. But like all guys, he gets a bit squirmy at the mention of the F-word -- future -- and his commitment-phobic ways bungle him right out of Anne's good graces.

The timing couldn't be worse. Just after his break-up with Anne, Jimmie's wealthy grandfather croaks, leaving him an estate valued at a cool $100 million. The only condition is that he marry before the stroke of 6:05 on his 30th birthday. Of course, said birthday is a mere 24 hours away. Isn't that always the way with these sorts of things?

"The Bachelor," despite its predictable love-or-lucre dilemma, is not without its moments and, when it surrenders to the absurd Keaton-esque spirit that inspires it, can actually be very near delightful. An early scene set at a romantic, notoriously proposal-centric restaurant, for instance, is a neatly absurd riff on the clichis of courtship.

Overnight, word gets out in the local press that Jimmie needs a quick bride, which creates a frenzy among hundreds of Bay Area females. Sure, a rabid mob of women hunting down a rare hetero multimillionaire beast is a stretch of a situation, even for a movie set in San Francisco. (And the caricatures among the mob -- sassy black chick, halter-wearing biker babe -- don't say much about the writer's imagination when it comes to women.) Nevertheless, when Jimmie's marathon quest sets off a bridal wave of interest, the film transforms a sea of white-wearing women into a threatening mass of tulle and tiaras.

Even the caveman ideas about commitment in "The Bachelor" aren't so awful. At one point, Jimmie compares the ritual of the bouquet toss to Shirley Jackson's grim story about ritualistic human sacrifice, "The Lottery." You've got to admit he has a point. But the film doesn't rest on its ball-and-chain jokes. At its best, it skews the absurdity of any human relationships -- even the successful ones. As terrified as Jimmie is of losing his freedom, Anne is equally worried about becoming like her parents -- who, it turns out, are an older couple nauseatingly, demonstratively, still in love with each other.

The problem with "The Bachelor" is the bachelor himself. Chris O'Donnell has never been an electrifying actor, but here he's so bland and unpersonable that it's not hard to see why so many of his ex-girlfriends won't marry him even for $100 million. He doesn't have the comic finesse to make the film's sensibility come alive, and he doesnt have the charisma to justify the tender love story. And he's not believable as either the wild, skirt-chasing mustang or the devoted one-woman man he eventually becomes.

O'Donnell's character is supposed to be torn, but he really appears permanently befuddled. When he has his great romantic epiphany, the poor guy looks remarkably like he's just had the last lick of sense slapped out of him. He's so uninteresting even his own movie gives up on him: His narration abruptly stops less than halfway through the story. And Renie Zellweger, yet again flouncing in and out of rooms and screwing up her face into little scrunchies of emotion, is rapidly wearing out any welcome that her sweetly vulnerable role in "Jerry Maguire" may have afforded her.

At least the film's cameo players seem to be getting into the spirit of things. As Jimmie frantically revisits all his former loves in a desperate, Don-Juan-in-hell effort to find a wife, "The Bachelor" showcases a surprising and often unexpectedly funny side of its minor cast. Brooke Shields lends a flinty snap to her brittle heiress who's fallen on hard times, Jennifer Esposito enjoys a perp-kicking spree as a cop clearly in love with her work and even Mariah Carey, in what may be the only five minutes of the last two years she's allowed her navel to be covered, is pleasantly self-mocking as a hammy diva. And as the grumpy old men spurring Jimmie toward the altar, Peter Ustinov, Ed Asner and James Cromwell act as if they're in a far better movie than they really are.

But too much of "The Bachelor" rests on the soft, narrow shoulders of its leads, and the movie always seems to be cracking under the strain. It may be too much to ask of a story that its heroes not merely fall in and out of love a few times but possess a nobility of soul that makes the whole $100 mil thing an issue for everyone but them. (For most of the film, Anne remains ignorant of Jimmie's potential inheritance, while he guiltily goes along with his grandfather's draconian demand in order to save the family business.) Maybe a little old-fashioned, all-American avarice would have livened the two up.

Whatever the excuse, though, "The Bachelor" doesn't generate enough laughs or sighs to hold together, and the only thing more disappointing than a truly awful film is a merely weak one that has some really fun moments. It may be just as easy to love rich as it is to love poor, but it's hard to love anything that's just plain average.