With a knick-knack, paddy-wack, Phillip Noyce makes this "Bone" a dog. 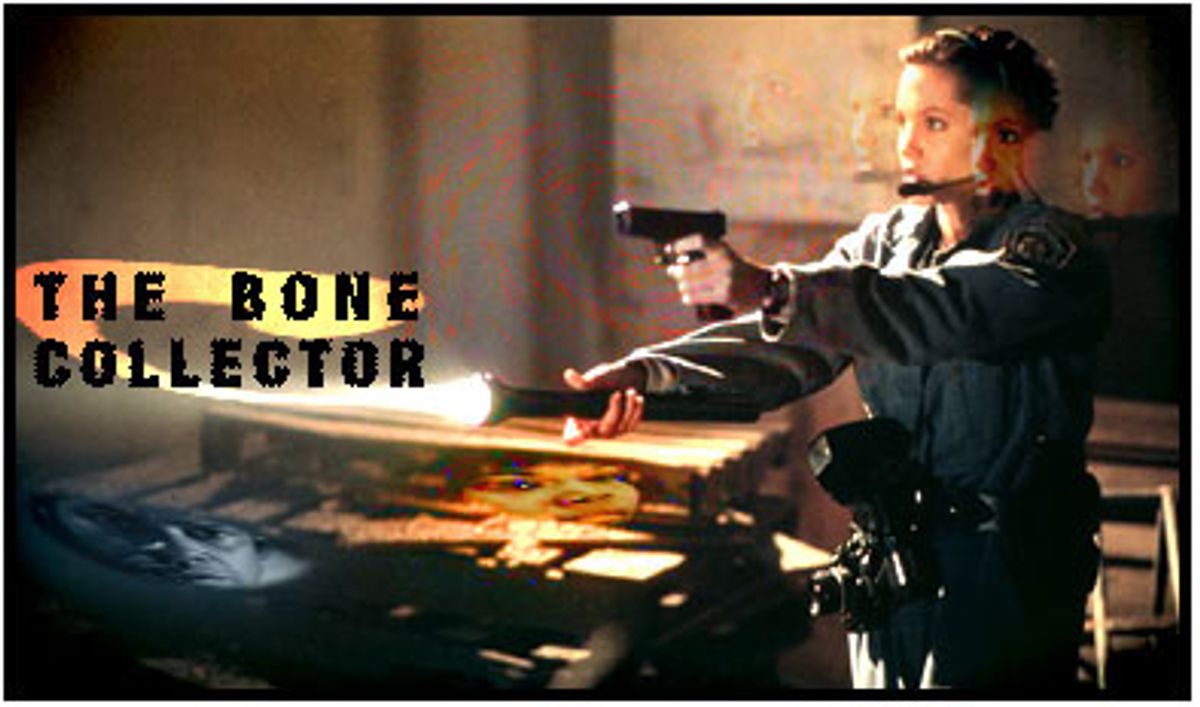 There's only one good reason to see "The Bone Collector," and her name is
Angelina Jolie. Jolie, as a smart and conscientious New York cop who
suddenly finds herself shoehorned uncomfortably into the role of forensic
investigator, gives so much more than the movie even asks of her. While it mashes
its way through its obvious mission, preoccupied with endless gross-outs and
emotional button-pushing, Jolie goes about her business quietly. The light of her
performance shines out through the picture's leaks and cracks.

Unfortunately, there are so many of those that space won't allow me to list them
here. It's enough to tell you that "The Bone Collector" is another one of those
unpleasant serial-killer movies that claims to be possessed of higher
intelligence -- in other words, it's smarter than your average serial-killer
movie. You see this in the way the killer leaves ingenious clues for his
pursuers. And although some of the Sherlock Holmes-style clues in "The Bone
Collector" are pretty clever and rather entertaining, they don't add up to
much in light of the eventual absurd revelation of the killer's motive.

"The Bone Collector" is virtually humorless -- also, supposedly, a sign of brains, though I
can't for the life of me figure out why. We're asked to accept the grimmest
murder scenarios possible, and we're told in relentless detail exactly what
happened: For example, a college student is left, bound, bleeding and mutilated
(but alive), in an abandoned slaughterhouse so that rats can feed on his bloody
flesh.

We don't see the rats at work in close-up. In fact, director Phillip Noyce shoots
all the action cagily, so that we never actually see any of these
horrendous deeds being done. But we do get lingering shots of flesh that's been
surgically cut so that we can see exposed bone, or wounds that have been nibbled
at by rodents. Audiences are supposed to take such artless unpleasantries in stride, I guess,
but their cumulative effect only makes you feel beaten up and queasy. The pulsing
subterranean message of "The Bone Collector" seems to be that police work ain't kid
stuff, y'know, and neither is serial killing.

It's too bad "The Bone Collector"
isn't smarter in the genuine sense of the word. Its premise (the screenplay was
adapted by Jeremy Iacone from Jeffery Deaver's novel)
could have made for a creepily engaging thriller. Lincoln Rhyme (Denzel
Washington) is a top forensics specialist who's become paralyzed from the neck
down, except for the use of one pointer finger (the better to click his mouse
with). His situation is made worse by the fact that he's subject to dangerous
seizures that could send him straight into a coma. Hence, he's lost his will to
live.

His picture brightens, though, when he meets Amelia Donaghy, a poised, intuitive
cop. He drafts her to work with him on a tough serial-murder case. The
perpetrator mutilates his victims before killing them, and in each instance
leaves a clue to the next murder, thus initiating a race against the clock.
Although Lincoln is bedridden, he has a lot of ace computer equipment handy to
help him track the villain. Amelia can do all the legwork Lincoln can't, but
she's also smart enough to match wits with him, and their easy affection for each
other is the most believable, and most enjoyable, angle of the story.

But Noyce ("The Saint," "Sliver"), so intent on rubbing our noses in the ghastliness
of the murders, only ends up distracting us from the skill of his actors. His
clumsiness really comes to the fore in an early scene in which Amelia, receiving
instructions from Lincoln via a headset, walks through a murder scene. He asks
her to describe what she sees, and instead of allowing her to simply interpret
what's around her -- the subtlety of which would have made the sequence that much
more gripping -- he makes it a point to show us the gory details as she
notices them.

"The Bone Collector" does feature two Teflon supporting performances.
Queen
Latifah is proving to be a consistently delightful presence in every movie in
which she appears, and this one is no exception. As Lincoln's nurse, she tends to
him with a kind of no-nonsense chaffing that in any fair and just world ought to
be enough to make an infirm man walk.

The hulking charmer Luis Guzman, as a refreshingly down-to-earth computer guy, serves up the few laughs "The Bone
Collector" has to offer. Kibbitzing with Lincoln about his mother, he asks
incredulously, "She's 76 and she's shtupping some guy named Morris, can you
believe that?" The line is so casual and throwaway that it almost palpably
lightens the movie, for a few seconds at least.

Washington is so restrained here that he's almost always a complete downer. That's disappointing for an actor as charismatic and as conscientious he is. But
he loosens up, and brightens up, in every one of his scenes with Jolie. And can
you blame him? Her Amelia has that sooty, weary-around-the-eyes look, and you can understand it completely given the weightiness of her new job. When she comes
across the body of one of the killer's victims, she can barely get out the words
"Oh, God." She doesn't need to. The gravity of what's in front of her is
reflected in the heavy grayness around her eyes.

That's exactly the kind of anguish mingled with dutiful professionalism that a
good woman cop would be likely to feel when the evidence of another woman's
suffering looms up so nakedly before her. Jolie doesn't overdramatize anything:
Every movement and every expression is effortless, natural. Even as "The Bone
Collector" plods on, fixating on each dingy or bloody detail, Jolie infuses the
picture with a kind of grace. In the midst of all its ugliness, she alone shows
any understanding of the rag and bone shop of the heart. Everyone else is just
rummaging around.