The Date Doctor is in!

A new romance service offers professional daters who will chat, flirt and tear you apart for a fee. 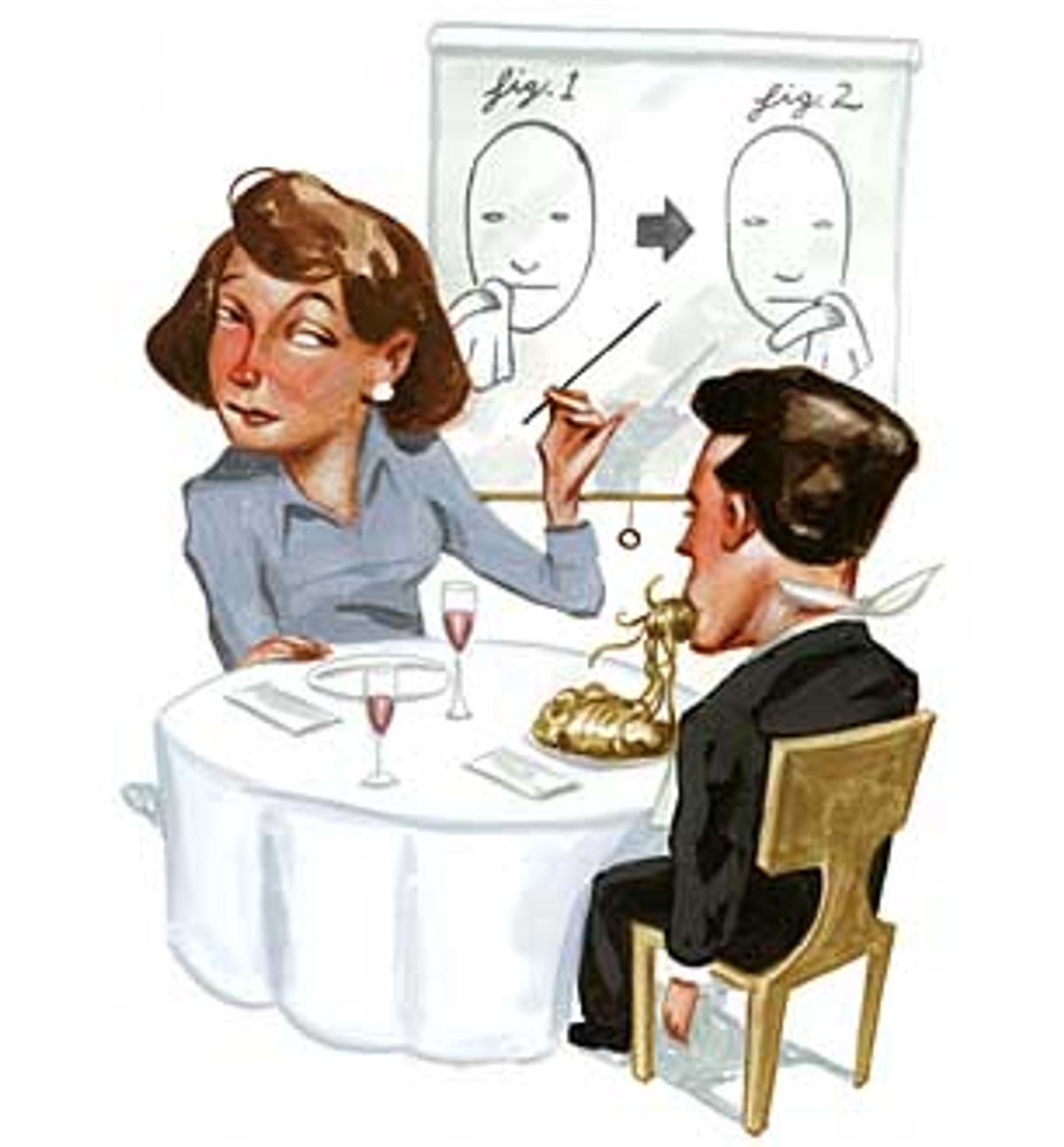 All men should be smooth as Gerald. When he fetched me for our date, it
wasn't on his bicycle. He brought a buttery yellow rose and opened every
door. At the Pacific Ocean Pier in Santa Monica, Calif., he sacrificed the tickets he
won at the arcade shooting gallery so I could trade them for a barbed-wire
tattoo appliqui like Pamela Anderson's real one. At the first sign of
goose bumps, he offered a sweater and at the end of the evening, he didn't
try to paw me. Gerald was a perfect gentleman -- for only $75 bucks an hour.

Gerald is an actor by day and power dater by night. He works for Bart Ellis,
a Los Angeles social worker and relationship expert who founded "power
dating" 10 years ago. The Date Doctor can't promise to cure
lonely hearts, but he can up your eligibility if you get a sorry-I'm-busy
signal after every date. Ellis sends clients on a mock date with one of his
10 power daters, who then reports back to the doctor on how a client could
improve the stakes for finding a mate. Then Ellis delivers the unexpurgated
advice. Perhaps a client needs to stock up on her Scope, for instance, or
keep his monologues to a minimum. While few amateur dates would ever dare
offer such self-improvement tips, these pros are trained to dispense advice readily. One employee wrote that a client's clothing style was "retirement home-ish," before adding, "He was so boring. He prattled on about his family and baseball -- I thought he would never shut up! He's a nerd!"

Unlike the hundreds of singles services and matchmaking businesses, the
Date Doctor doesn't pretend to play Cupid. Ellis shoots for compatibility,
but he's not running an introduction service. For my date, Ellis asked such probing
questions as, "Do you want a sophisticated kind of guy? What about hair, do you want a full head of hair?" Surprise me, I said. As long as the guy pays for our date, I
assured him, I would be happy.

"And don't worry, the feedback session is gentle," Ellis added. "It's
the sort of stuff a woman tells her girlfriend about a date the next day."
Until then I had regarded my adventure into dating education with the
blithe condescension of someone who already has a boyfriend, for whom
this is just another professional challenge. But Ellis' remark made me
nervous. I hoped these daters were more tactful than my
friends, who skewer men with morning-after exclamations like, "He had the
smallest penis west of Nantucket!"

Clients pay $150 for a two-hour date and critique session, although with
Ellis' recent appearance on a French TV show and other media attention, he
plans to raise prices to $495 for a 3-hour date.

Ellis recruits surrogate daters through ads or they contact him through
word of mouth. "I look for people who can improvise when something isn't going well, like if a client is painfully shy," Ellis explains. "A lot of them are actors, though they're not acting on the date. I didn't want to hire psychologists who would approach the date
clinically. The power dater merely serves as a video camera or a mirror."
Like his employees, the 60-year-old, happily married doctor peppers
conversation with non-clinical observations -- such as "Women are usually on the receiving end of a lot of shit, but that doesn't mean every guy is a schmuck."

While not expected to render deep psychological analyses, power daters do
have to possess some skills. Ellis says being single and perceptive are
prerequisites. Moreover, he tosses resumés of those candidates who
drool over getting paid to meet chicks. Ellis expects power daters to flirt
with a client to test how they respond to touch and intimacy. (If things go well, power daters are allowed to pursue relationships with clients, but it's more common for the clients to develop crushes.) Of course, knowing a date is dating you in order to criticize you dampens the chance for a love connection. As ex-client Dawn Herriot says, "It's scary being assessed by someone while you're ordering dinner."

Like an uncooperative patient, my critique showed that I was unwilling to
flirt. When Gerald got flirty, at the arcade by a machine that was supposed to measure sex appeal, I just heard bad voice-over script: He [brushing her shoulder blades
lightly]: "Oh look, here's a game for you. [Coyly] Do you want to try it?

I begged off, saying that I would fall into the Ice Queen category.
But really I just felt silly responding to scripted flirtation. Ellis
acknowledges that a client's behavior can be largely determined by
the mock dater. "It takes six or seven dates to really get to know a
person," he admits. "So the power date is only a snapshot, not a
full-length movie."

But Ellis believes he can deduce flaws despite incompatibility.
"There are people who say, 'I don't think so-and-so read it right, let me go
out with a different power dater.' Then they go out with someone else and the
same patterns emerge, like concealing too much of yourself during a date.

"Some bad behavior doesn't require a psych degree to note," he continues: "One woman got so drunk, she began eating off her power date's plate. Then she called out to
the waiter, 'Somebody marry us quick! I've only got one egg left, and I'm
sure it's fried.' One man sank 1,000 ships after his power date confided
that her mother had passed away recently and he responded, 'I know how you
feel -- my dog just died!'"

Doug Warhit, a 43-year-old who retired from power dating a few years ago,
wishes more women would leave a guy wanting more. "Don't unpack all your
baggage on a first date," he advises. Another taboo is talking about what a
jerk an ex-boyfriend was or telling a date that your therapist thinks you
need to meet more people. According to Warhit, the most common mistake among
women is fantasizing that this is The One before a main course had been
served.

"There's nothing wrong with having a checklist," he adds, "but some girls put
a man through the Spanish Inquisition." Another no-no is discussing that
former coke habit or gynecological problems (which leaves politics, sex and
religion as conversation fodder).

Sixty percent of Ellis' clients are men; Ellis claims many are "competitive daters." Often successful film producers or executives, these men are obsessed with being the best at whatever they do, including dating. "These are not nerds or losers," Ellis insists.

The rest of his clients, however, may deserve these untoward descriptives.
"We're supposed to try to say something positive about the client," sighs
power dater Laura Buehl. "But sometimes you really have to dig deep. I've seen so many guys who are desperate to get laid, it's scary." Others just want to "iron out their
dating style," Ellis says. Just as a Botox injection irons out those
furrowed brows, power dating professes to plump personality wrinkles.

According to Ellis, the service averages 20 clients a month, and in the past
six months it has garnered a groupie following. Adventure seekers sign
on for a power date because it's a novel experience, like bungee jumping.
"They do it as a happening that blows their mind because they get another
perspective on themselves," he explains. "It's another way to explore
consciousness. They're not doing it to find out what they do wrong on a
date."

Power dating makes economic science out of romantic alchemy. Operating on
the premise that one can buy love, the client invests money in
self-awareness, with the expectation that they'll become more attractive.
Ellis considers his service to be the same kind of investment as a sexy new outfit bought for a date. Competitive daters don't power date to find love. They approach it
like a business plan: to identify deficiencies, either mask or correct
them, and thereby become more marketable. "The cost for a consult with the Date
Doctor is far less than what it will cost you for countless dating disasters, or worse
yet, for divorce court, alimony payments and child support, etc.," Ellis
surmises. And indeed, perhaps we are more willing to accept criticism when
we pay for it -- if Aunt Bessie gave the same advice, we'd shut our ears and open our
mouths in defense.

But if power dating becomes a fad, what will it portend for the future of
romance? In an age of biotech eugenics and New Age self-help, will power
dating become the answer to those nagging personality problems that neither
manuals nor gene therapy can cure? Just as we can build a baby from genius
sperm and fashion-model ova, maybe we'll all learn to camouflage personality
scars to make ourselves more romantically marketable.

But it's difficult to imagine a world where so many people are gluttons for power-dating punishment. Asking to be personally, intimately assessed feels masochistic even for a carefree freelancer accustomed to grueling criticism and abundant rejection. Gerald was right. I was guilty of behaving too much like a journalist, but his gall irked me anyway. Maybe I was a little -- well -- unrevealing. But I'm from New England. Once you've weathered the ice storm of suburban Connecticut, it's difficult to acclimate to California's sun-drenched confessional booth. Skeptical Yankees subscribe to a heal-thyself doctrine; we self-actualize the old-fashioned way -- by sleeping on a bed of nails.

Still, blind dates -- even fake ones -- are always angst-producing
experiences. The day of my rendezvous with Gerald, I broke out with a
Texas-sized pimple, changed no fewer than six times and regressed to my
first outfit. And when I went to the bathroom during the chips-and-salsa
chat with Gerald, I realized that while the date might be fake, that sprig of cilantro
wedged between my teeth was real. Besides, compared to the last blind date
I went on -- during which the man unloaded a steamer trunk of 12-stepping emotional baggage, then stuck a wormy tongue in my throat -- my mock date was perfect. So, as a gesture
of gratitude (and so I get the last word), I've penned a Dear Jerry letter:

You and me, it wasn't meant to be. Sigh. I could never fall for a man
who earned his living by criticizing me. And I forgive you for telling the
Date Doc I was boring. It stung, though -- and just for the record, when I haven't driven seven hours and inhaled traffic exhaust for an additional two, clogged on the
artery known as the Santa Monica Freeway, I'm a real party girl. Hoo boy, I
could tell you about some wild nights -- if only I could remember them. I
know you were never truly interested in me (how could you be, when I'm so
BOOORING?!) But you're an actor and your performance was flawless. I mean
that, babe! You were fab -- what do those Colgate commercial directors know?
I hope you get your big break soon, so you can give up this gig -- because
dating librarian types like me for $15 an hour must be one of the oddest
ways to earn a living that Hollywood has invented for its legions of unemployed wannabes.