Steppin' in it. Woof!

Who breaks a Chihuahua on the wheel? Wall Street Journal gets medieval. 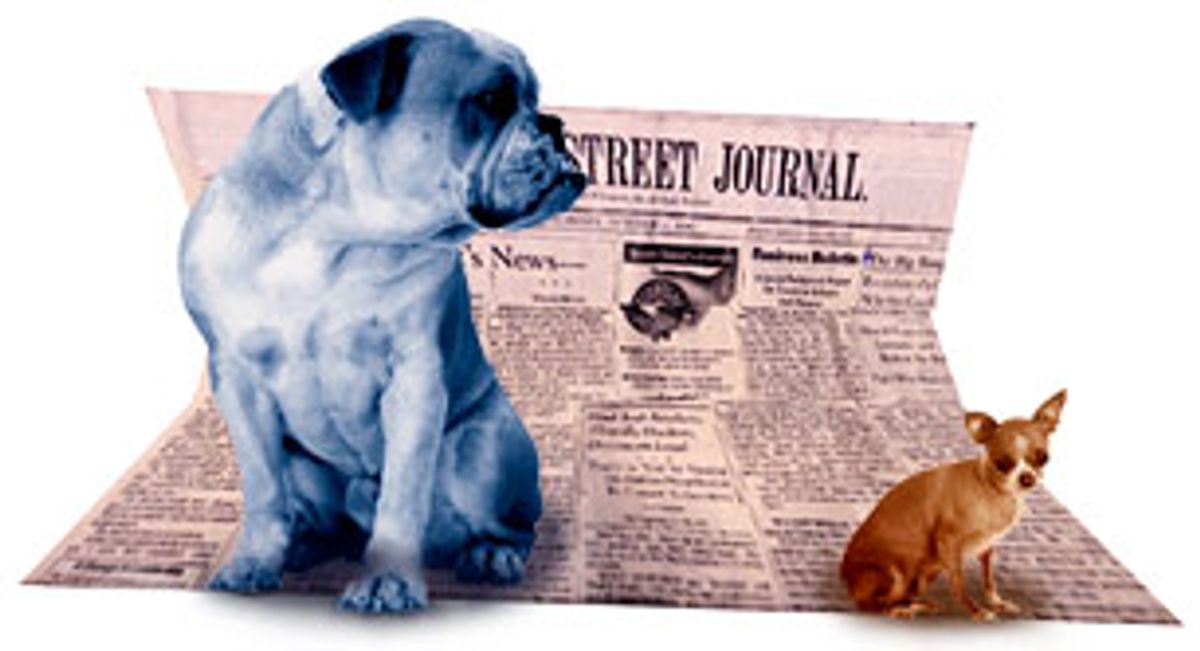 The genus is Canis barbarus medias, the common news media. As others may have pointed out before, it is not unlike a pack of adolescent wolves: Its members take pleasure in making a great deal of noise and perhaps even greater pleasure in sitting back -- as the echoes bounce from canyon to canyon across the land -- and congratulating themselves on what a great deal of noise they've made. (Naturally, I exclude Salon from this group; having worked here I can testify that its inherent nature is more panda-like than canine.)

One recent cause for barking has been the august and ferocious Wall Street Journal. Why? Because a Chihuahua sat on its big, fat, gray flea-bitten paw. And when that happens the lumbering beast fires off a cease-and-desist order.

I won't bore you with the gruesome details, but the basic facts of the case go something like this: In rural Penobscot County, Maine, Noreen Reed and her gentleman friend, Chris Yountz, publish a 12-page monthly tabloid for children age 5 to 14. It carries word games, puzzles, poems, drawings by local kids -- that sort of thing. They distribute it for free out of the back of their old car. According to a report on APBNews.com, it has a circulation of a few thousand. Reed and Yountz, who say they live on about $6,000 a year, call their publication the Small Street Journal.

Not on our planet, you don't, says the WSJ. When the Journal's lawyers got wind of Reed and Yountz's publication and its name -- which, if you're a humorless, clueless nincompoop, you might mistake for the Wall Street Journal -- they got their tweed knickers in a bunch and went way legal. That wasn't exactly a public-relations masterstroke for the old WSJ.

"Your [trademark] registration and use of Small Street Journal," the WSJ woofed in a letter sent to the log house that Reed and Yountz call home, "constitutes trademark infringement, trademark dilution and unfair competition under federal and state law." It howled on longer with the usual rabid legalisms, but you get the idea.

The rest of the wild dogs in the media pack set to attacking their own once they heard about the WSJ's doggerel and its target. (Salon, showing uncharacteristic restraint, sat this one out, preferring to stay busy over in the corner licking its ... er, playing with a tennis ball.) The nearby Bangor and Portland newspapers weighed in, and then the story made it to the Big Apple, to the venerable pages of the New York Post ("Kids' Paper Bullied by Big, Bad WSJ").

Then Pulitzer Prize-winning reporter Sydney H. Schanberg heard about the story. Schanberg, known for his memoir "The Death and Life of Dith Pran: A Story of Cambodia," which was the basis for the movie "The Killing Fields," is a former New York Times columnist who is now editor of APBnews.com's investigative unit. Last Tuesday, he wrote a longish article detailing the case.

"The Wall Street Journal," Schanberg wrote, "smarted over being painted as the heavy. 'This isn't David vs. Goliath,' said Richard Tofel, vice president of corporate communications for Dow Jones. 'We're not trying to put little children out of business.'" Point taken, Mr. Tofel, and yet, oddly enough, the phrase "I'll get you and your little dog" does come to mind.

But the kibble thickens: Schanberg's article reveals that there's another Small Street Journal, this one published by a woman in Meridian, Miss., on her home computer, and she too has registered the name. Then, as you read on, a funny thing happens. You start to feel a little bad for the crotchety bull mastiff named WSJ (annual revenues $2 billion), which -- if you look at it from the lawyers' point of view, and if you can get jiggy with the whole brand-protection thing -- may indeed be in danger of getting nibbled to death by Chihuahuas.

Then you come to your senses -- which is what the Wall Street Journal might want to do about now.

Still, to be fair, and as a media cur myself (in the end, we hang together), I've got to caution you not to use this opportunity to take advantage of the big dog while it's under siege. If anyone tries to trademark "Wall Street Urinal," I guarantee you'll hear from the WSJ's lawyers, who'll be all over your booty like dogs on a meat truck.

And don't even think of calling your network of Web sites Saloon.