It's sprawling and overloaded with facts, but this account of the building of the transcontinental railroad does justice to one of the great American achievements. 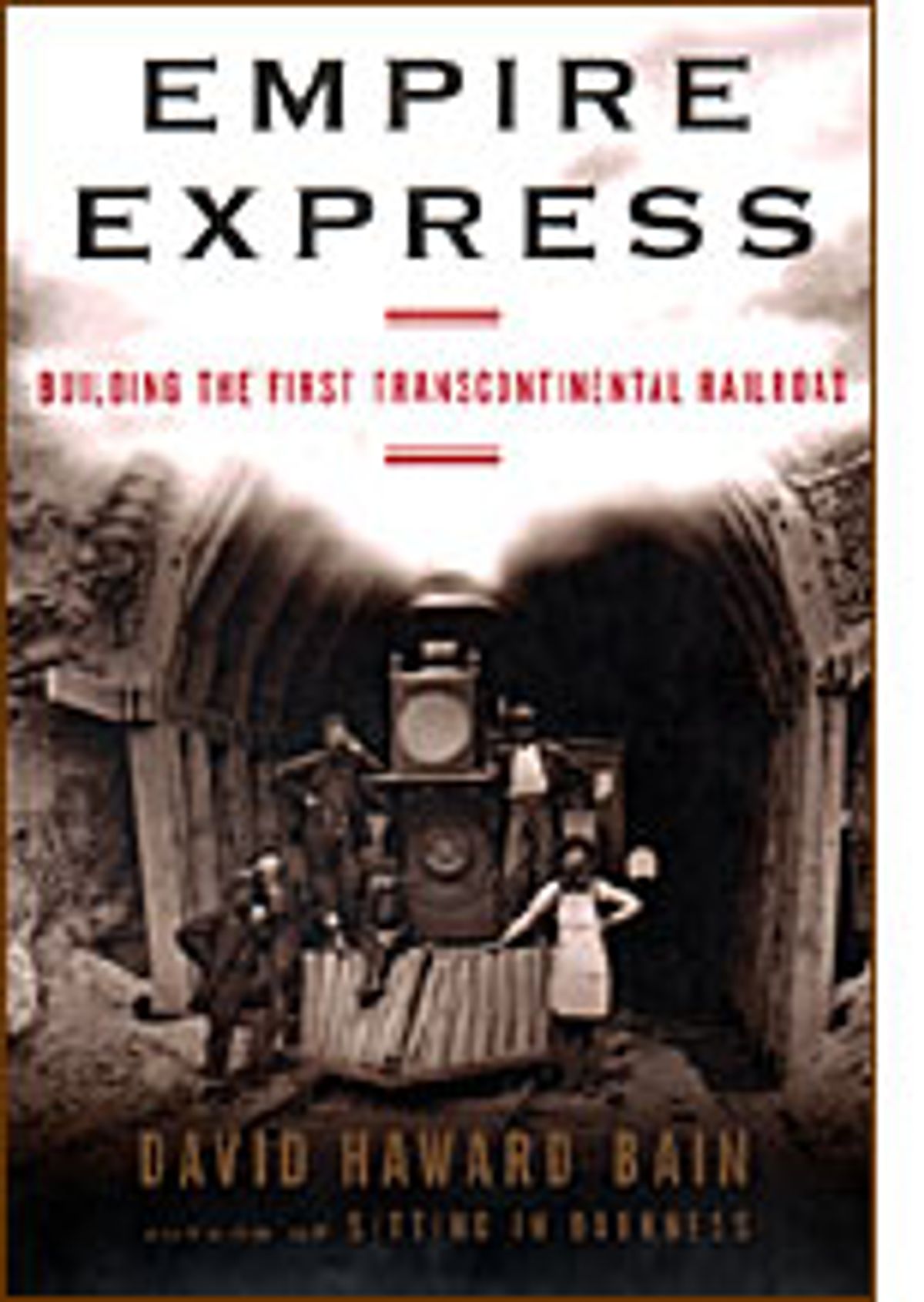 We forget that the brutal, epic construction of America's transcontinental railroad owed as much to the goals of Columbus as to those of Lewis and Clark. The railroad was initially seen as an iron-and-coal update of the Niqa, the Pinta and the Santa Maria, which had set out to forge access to Asia; indeed, Walt Whitman would celebrate the pounding of the final spike with a poem called "A Passage to India." In the early 1830s, when a visionary named Asa Whitney first broached the idea of building a railroad from "Michigan to the Pacific," it took well over a hundred days to sail from New York to China; with tracks stretching from New York to San Francisco, the total journey would require a mere 30.

Think of the money to be made! Oh -- and the accompanying moral beneficence: Hundreds of new towns would spring up along the railroad, civilization thus conquering the Western wilderness; and faraway Asian lands could be missionized as well. As David Haward Bain writes in "Empire Express," Whitney "would annihilate distance, yes -- and with it, ignorance, want, and barbarism -- through the ineffably promising devices of American trade and American Christianity."

In the event, the building of the railroad -- which didn't commence until the Civil War had begun and wouldn't end until Grant was in office, by which time Whitney was all but forgotten -- was sooted through with corruption, shoddy workmanship, political maliciousness and such horrific catastrophes as frostbite, lethal sunburns, avalanches, misapplied explosives, Indian raids, snow blindness, smallpox and the viciousness of the new towns themselves. (The Cheyenne Leader ran a daily column titled "Last Night's Shootings.") Still, the completion of the railroad remains, after the saving of the Union, the great American triumph of the 19th century.

At its best, the sprawling "Empire Express" is a stunningly researched, prismatically written mix of Robert Caro, David McCullough, Shelby Foote and Connie Bruck. At its worst, it's a litany of dry documents and dull transactions that caves in upon itself; Bain, a Middlebury College historian and the author of numerous essays for Smithsonian and American Heritage, took 14 years to finish the tome, and at times he is clearly overwhelmed. The "Nicholas Nickleby"-size cast is impossible to keep straight. And do we need really to know the details of every bond offering?

But if you can make your way back from the spur lines, the main tracks of the narrative are fascinating. For instance, we learn that the Civil War both enabled construction to begin (the South, which had insisted that the new line cross through the slave states, had no say after secession) and impeded it (building materials were relegated to the war effort). Lincoln, once a lawyer for an Illinois rail line, comes off as shrewd and instrumental. (Bain's set piece on the Great Emancipator's railroad funeral procession is one of the highlights of his book -- so many flowers littered the tracks that the train had to stop repeatedly while the rails were brushed clean.)

The story shuttles between the Central Pacific line -- whose construction started in Sacramento and battled through the impossible Sierra Nevadas (there was no choice but to follow the Donner Party's route in reverse) on toward the Nevada and Utah territories -- and the decidedly more venal Union Pacific line (whose rococo record of corruption inspired Mark Twain's scathing "The Gilded Age"), which launched in Omaha, Neb., and had to cross voluminous Cheyenne, Sioux and Arapaho lands to meet up with the Central Pacific in Utah. Both companies were guilty of "bending truth and geography for years," as Bain cleverly puts it. The Central Pacific helmsmen (the famed old-money names of California: Leland Stanford, Mark Hopkins and Collis Huntington, who had "no more soul than a shark") weren't as egregious as their Eastern brethren, but they cut their share of corners. Trestles were hastily built on unstable gravel; cottonwood ties were substituted for iron and rotted accordingly.

I wish Bain had spent as much time on his proletarians as on his capitalists, but great details abound nonetheless. Just as the transcontinental railroad represented a grand link to vast Asia, so, too, did it bring Asia to America: By 1865, some 90 percent of C.P.'s workers were Chinese men, mostly from the famine-struck Kwantung province. Unlike their better-paid Irish coworkers, who drank cold water, the Chinese preferred boiled tea; thus they contracted much less illness and came to dominate the work force.

If Chinese workers and slipshod construction mark the tale of the Central Pacific, "wholesale robbery" and Indian battles stain the chronicle of the Union Pacific. The U.P. lends the book its biggest villain, the "inscrutable corsair" Thomas Durant, who cooked so many books, advanced so many unnecessary detours and bribed so many politicians that it's still impossible to fully trace his roundelay of felonies. But the passages on Indian battles make you far more heartsick. The U.P.'s lines bisected the hunting grounds of many tribes, and Cheyenne, Arapaho and Sioux, threatened by starvation, began raiding the new railroad towns, sabotaging the tracks, stopping the trains to steal food and supplies and scalping and killing passengers and settlers. Atrocities and reprisals proliferated on both sides.

Yet on May 10, 1869, the Central Pacific and the Union Pacific were finally joined in a "Mountain Wedding" in the tiny Gentile settlement of Promontory Summit, Utah. The site was a terrific snub to Brigham Young, a substantial railroad backer, whose Mormon followers had endured two years of drought and locusts while they wholeheartedly helped build the railroad, in the vain hope that it would cross through a strategic Mormon town.

Synchronized by Morse code messages tapped across the nation's by-then-unbroken set of "eloquent wires" (as Whitman rhapsodized), the signal went out after the final hammer of the final, golden spike. Church bells peeled across the country; cannons boomed. At Promontory Summit, numerous dignitaries waxed lyrical. One of them cited a prophecy that "a granite statue of Columbus would be erected on the highest peak of the Rocky Mountains," then nodded to the great throng of workers gathered to celebrate their unparalleled accomplishment: "You have made the prophecy today a fact," he roared. "This is the way to India."