"Breakfast With Scot" by Michael Downing

In a smart, funny and affecting novel, two gay men inherit an 11-year-old boy and blanch when he turns out to be a budding queen. 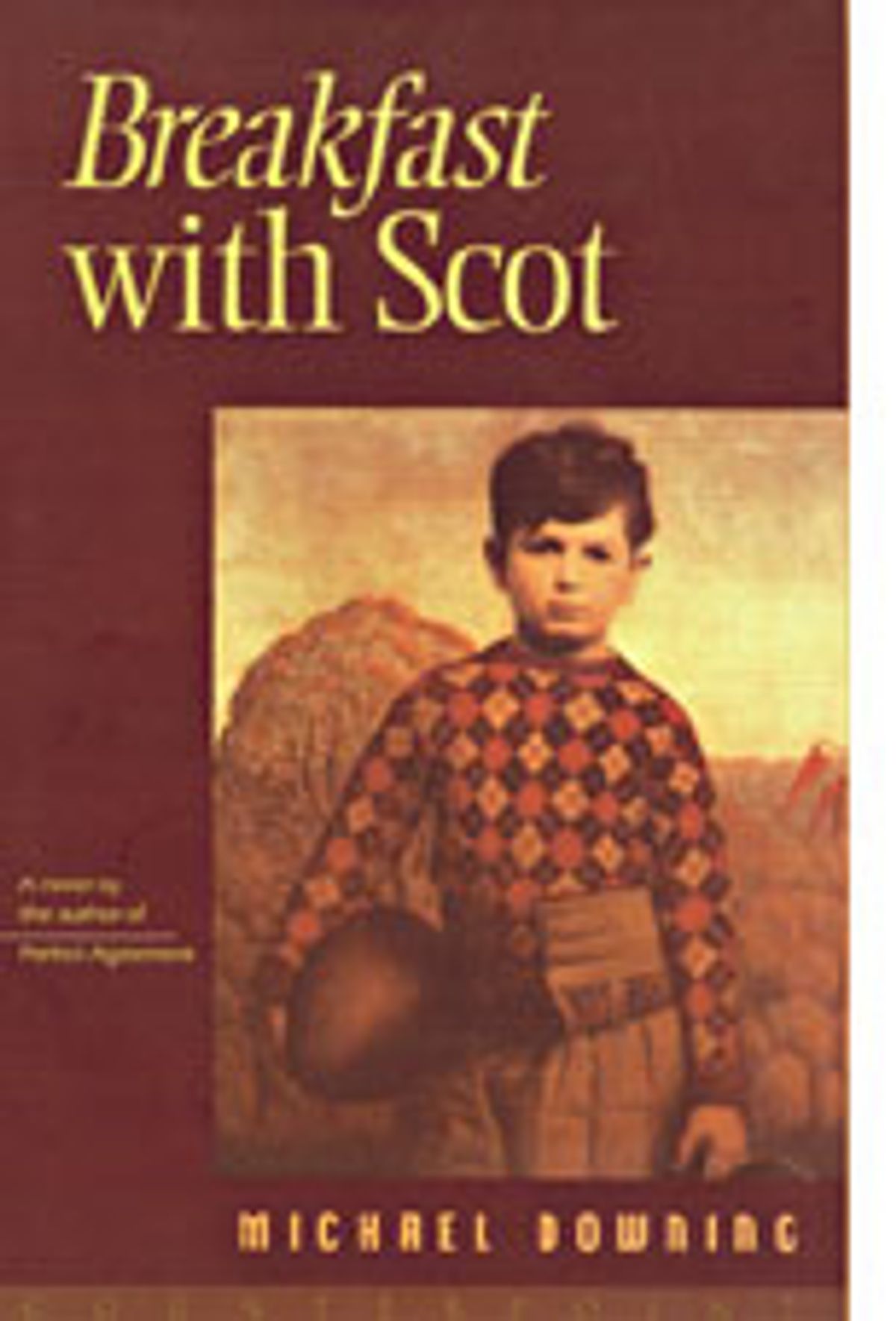 "Having a child, I soon learned, is like having an open wound. People ask you about it. They give you advice and secret remedies. Friends tell you to ignore it for a while and see if it doesn't heal itself. Everyone assures you that it won't kill you. And then they show you their scars." So writes Michael Downing in his funny and affecting fourth novel, "Breakfast With Scot," about a Cambridge, Mass., gay couple who inherit an 11-year-old boy.

Downing has constructed a light-as-air divertimento out of short, quirky episodes that move briskly toward (usually funny) punch lines about gender, sexuality, child-rearing, American families, etc. The plot turns on a drunken promise. Ed, the book's narrator, an editor at an obscure art magazine, and his live-in lover of many years, Sam, a New Age chiropractor, are having dinner with Sam's brother, Billy, and Billy's girlfriend, Julie; at one point the straight couple slur that should anything ever happen to them, Sam and Ed have to care for their son, Scot. Equally drunk, Sam and Ed agree, because, well, it would be rude, even hurtful, to say no.

Time passes. Sam and Ed go about their happily monogamous life in liberal Cambridge. Then Julie, now separated from Billy, dies while she is shooting up (a bubble in the syringe), and it turns out that she has named Sam Scot's legal guardian. (The shiftless Billy and his new girlfriend are by then living in South America.)

That's the setup. The main action, which takes place in the first few months after Scot's arrival, adds up, as you might expect, to a wry look at a new configuration of the American family. But there is a twist -- a near-brilliant one, which pushes the novel's humor and pathos to the limit: Scot is an 11-year-old Truman Capote or Quentin Crisp, limp wrists and all. He shows up with a musical hairbrush and two makeup kits. He loves Pink Gardenia hand lotion and pantyhose and won't leave the house without his Chap Stick. He wears a white patent-leather belt with "pink dancing dogs and jazzy little musical notes" on it, and his interest in school sports is limited to baton twirling and possibly cheerleading.

Everyone in the fifth grade thinks he's gay, of course, but he's too young to know what he is -- only that he isn't like most other boys. (Delicate and otherworldly, he reminds Ed of a cherub in a pre-Renaissance painting.) Sam and Ed finally admit to each other that his flamboyant behavior embarrasses them; Ed confesses that when he looks at Scot, he sees what the school bully sees.

The book's domestic dramas are deftly done and convincing enough to make you wince or laugh, or else to bring a lump to your throat. The novel is not simply a comedy of upside-down manners but also a testament to the joys and foibles of parenting (however you define it) and to the amazing resilience of "different" children in the face of banal, everyday cruelty. The characters are interesting and complex; 30 pages in, it's easy to forget that they're fictional, that this isn't heartfelt testimony from a parent about a real son. And the most interesting and complex of them all is Scot, one of the great child creations of recent literature -- a dainty, prepubescent Holden Caulfield with a thing for neckerchiefs.

Greg Bottoms is the author of "Sentimental, Heartbroken Rednecks: Stories," from which this story is excerpted. It will be published in September. His previous book was "Angelhead: A Memoir," which will be released in paperback in September.