For the love of the game show

ABC's "Who Wants to Be a Millionaire" hits the jackpot; Fox's "Greed" is not good. 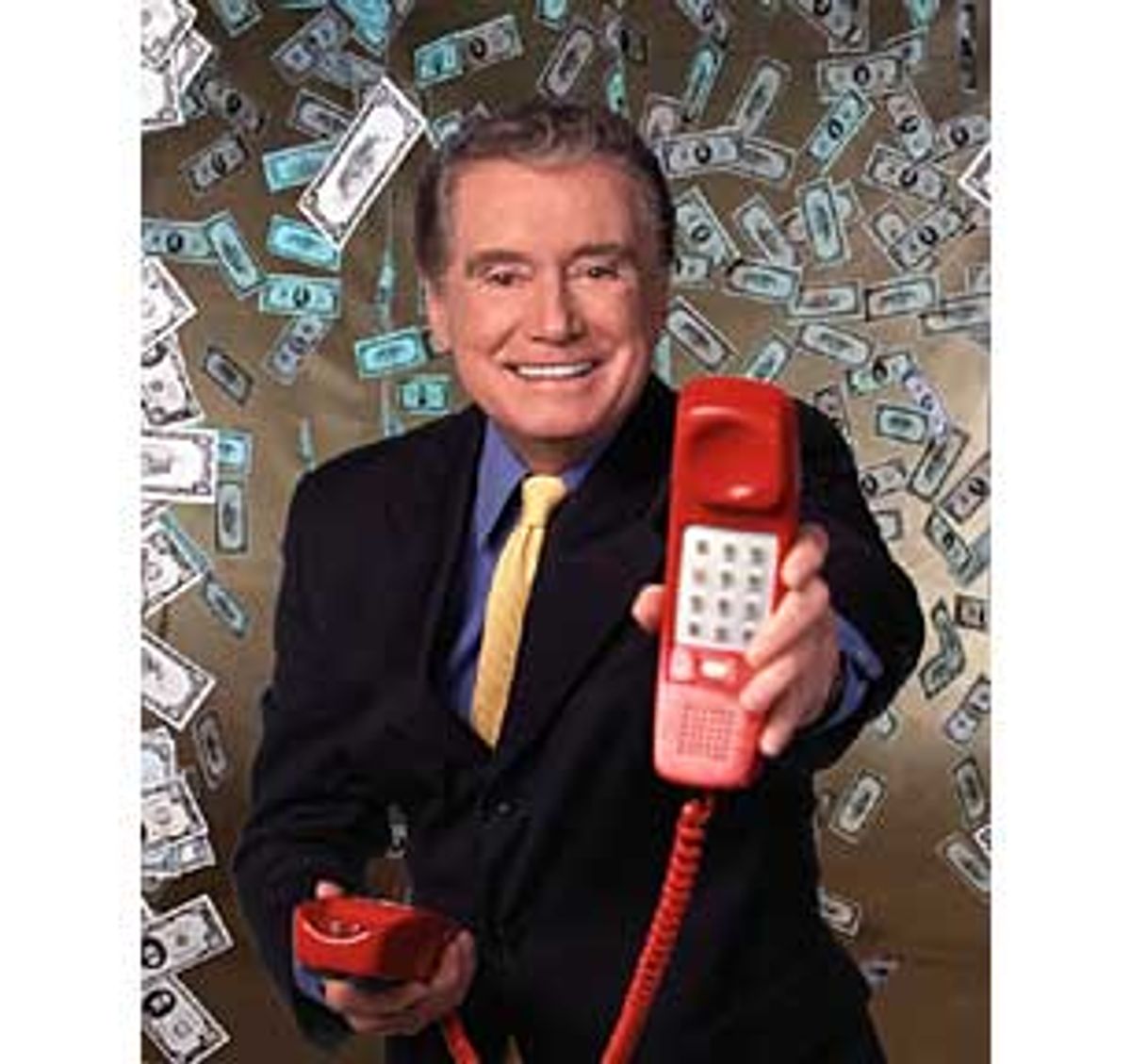 The first thing you need to know about the appeal of ABC's hit prime-time game
show "Who Wants to Be a Millionaire" is this: It's not about the money. None of
the best game shows are. It's about watching how other people, people just like
you and me, perform under pressure.

Some of them maintain an almost eerie
serenity and mental agility; others sweat and crumble and stall out.
"Millionaire" is a quiz show, but it's also a seductive reality soap opera in
which we, the armchair smarty-pantses, take vicarious starring roles; while the
contestants in the hot seat flail, we answer questions with ease, and then
trash-talk to the television. The double helix is the genetic structure of DNA!
How could anybody not know that! Brian Jones was a founding member of the
Rolling Stones, not Ron Wood, you idiot! A morel is a mushroom, not an
eel! How did this guy even get on the show? For those of us glued to its two-week
run, "Millionaire" is not about the money. It's about validation.

Not that "Who Wants to Be a Millionaire" doesn't give off a (relatively refined)
whiff of living large. At center stage on the floor, between the weird dentist
chairs occupied by host Regis Philbin and the contestant, rests a deep
glass-sided box that looks like a computer monitor; it's filled with a sheet of
Franklins, bathed in golden light. Philbin's smartly tailored suits, shirts and
ties are all done in the color of money -- dark greens, deep grays, rich silvers
and golds. And, as on quiz shows from "The $64,000 Question" to "Jeopardy," the
difficulty of the questions increases in proportion to the dollar amount. On
"Millionaire," hundred-dollar questions, even thousand-dollar questions, are
gimmes. In this robust economy, $100 is strictly chump change.

Adapted from British television, "Millionaire" debuted on ABC Aug. 16; in an
unusual programming gambit, episodes of the show ran for 13 nights in a row. They
averaged a hearty 14 million viewers a night, in the dog days of summer TV. The
Nov. 7 kickoff of the show's second two-week run attracted a whopping 22 million
viewers; the Nov. 11 edition racked up 25 million viewers and beat "Frasier,"
making it the first ABC show in almost 17 years to out-rate a first-run episode
of a 9 p.m. Thursday NBC sitcom.

"Millionaire" (which ends its current run on
Sunday) has turned out to be the TV phenomenon of the year -- to the surprise of
those in the industry who thought prime-time game shows were relics of
three-network, pre-cable antiquity. Instead, "Millionaire" has reinvented the
genre with a blend of high-tech aesthetics (dramatic -- and just this side of
campy -- laser lights, portentous New Age-druid background music) and
old-fashioned human drama.

On "Millionaire," contestants face 15 multiple-choice questions that get harder
as they go along. After a widely publicized gaffe in the
summer series, in which one
contestant's correct answer was
mistakenly judged incorrect, the
show's producers have tightened
up the research protocol; answers
are now quadruple-checked, rather
than triple-checked, and the
questions and answers are
zealously guarded. "We take
security very seriously," said
executive producer Michael
Davies. "One of my great nightmares is that
someone somehow finds a way to expose a bunch of our material and we have to
throw it all out."

To succeed at "Millionaire," contestants have to have a wide, "Jeopardy"-type
range of knowledge. But more than that, contestants have to have the confidence
to resist second-guessing themselves. And that's the tricky part. They have to be
strong enough of mind not to waver when Philbin, messing with their heads, takes
a pregnant pause, looks them in the eye and asks, "Confident? You're sure? Is
that your final answer?"

And "Millionaire" is brilliantly structured to plant seeds of doubt. It boosts
confidence with ridiculously easy early-round questions like, "What color is
Sesame Street's Big Bird? A.) Red; B.) Yellow; C.) Blue; D.)Green." Then, at
No. 9, the $16,000 mark, it subtly shifts into questions that only seem
obvious. Last week, one chatty fellow named John Christensen took eons (there's
no time limit, just deft editing) to ponder the $32,000 question, "Which element
makes up the largest percentage of the earth's atmosphere? A.) Oxygen; B.)
Hydrogen; C.) Nitrogen; D.) Carbon." He used two of his three "lifelines" -- a
contestant can phone a friend for help, poll the audience or have two wrong
choices deleted from the possible answers, but they can only use each lifeline
once -- before deciding to quit and walk away with the $16,000 he'd already won.

Oddly, most of the contestants on "Millionaire" have opted to cash out rather
than answer the riskier, more lucrative questions (you lose some of what you've won for a wrong answer), and that's another thing that's
fascinating about the show -- in a culture of excess, it offers a rare TV glimpse
of people deciding that what they have is enough.

Stunned by the
show's popularity, the other networks are now scrambling to produce "Who
Wants to Be" wannabes. NBC is bringing back "Twenty-One" (famously tainted in the
1950s game show scandals, and the subject of the movie "Quiz Show"), while CBS is
reviving "The $64,000 Question." CBS is also readying an American version of a
Swedish show called "Survivor," in which a group of contestants is marooned on a
remote island; the contestant left after everybody else cracks under the rigors
of roughing it wins $1 million.

None of these shows, however, have the "Millionaire" secret weapon: The Regis
Factor. The cranky Philbin is truly one of a kind. You can't exactly call him
warm, but he's got a regular-guy, straight-shooting charm that eases the show's
psych-out tension; you can see nervous contestants visibly relax when Philbin
engages them in small talk. But Philbin is also kind of, well, kooky. You never
know WHEN HE'S GOING TO GO OFF! WHY IS HE SHOUTING INTO THE CAMERA? And that
makes Philbin more edgily entertaining than, say, Alex Trebek.

Philbin expertly elevates "Millionaire" into his own little party (think Groucho
Marx on "You Bet Your Life"), yet he's professional enough to not upstage the
contestants. After the beleaguered Christensen quit rather than answer that
question about the Earth's atmosphere, Philbin did an extraordinary thing, for a
game show host. He showed Christensen the correct answer (nitrogen), which was not the one
the guy had been leaning toward, and in that exuberant, combustible Philbin way
of his, blurted a consoling, "See? YA DID THE RIGHT THING!" Nope, "Millionaire"
is not about the money.

That lesson is lost on Fox's "Greed," an ugly "Millionaire" rip-off that debuted
on Nov. 4. While "Millionaire" oozes credibility, honesty and even, I swear,
class, "Greed" merely oozes. A stench of desperation surrounds the show, and with
good reason -- it's Fox's last hope for a hit this disastrous season. As an
in-your-face to "Millionaire," "Greed" boasts a top prize of 2 million
bucks.

In only its second week on the air (Nov. 11), the show fortuitously had
its first million-dollar winner -- something "Millionaire" had yet to have -- and
the big moment just happened to occur after 9:30 p.m., when "Millionaire" ended
on ABC. (According to Nielsen ratings, "Greed" picked up 4.4 million viewers that
night in its 9:30 half-hour. Its overall rating for Nov. 11 was upwards of 9
million viewers, which is small compared to "Millionaire," but still more than
double the ratings for "Action," which Fox previously aired in that time slot.)

"Greed" is the Darth Vader of game shows, unapologetically embracing the dark
side. "Do you feel the need for greed?" bellows smirky,
cloven-hoofed host Chuck Woolery, and the contestants nod their heads and smile
wide-eyed, or pump their fists in the air and mouth, "Yes!" On "Greed,"
individual contestants with no loyalty to one another are yoked together into a
five-person team. The team figuratively climbs the "Tower of Greed" by answering
multiple-choice questions about pop culture ("Which company introduced the
Walkman?").

At various checkpoints in the game, one teammate is singled out and
given the opportunity to betray another for $10,000 ("Do it!" the audience
urges); the smaller the team, the bigger each slice of the pie. Last week, a guy
with bad '80s rooster hair took the bait and eliminated a very upset female
teammate, who asked him plaintively, "Why me?" "I felt the need," he replied
coolly. If you're the type who believes in the inherent goodness of your fellow
man, "Greed" will cure you of that notion pretty quick.

"Greed" is about the money ("smell it, feel it," orders the horned and
pointy-tailed Woolery, waving around a thick wad of cash), and, oh, it's not
pretty. Instead of geography, science, literature or history, the
questions are based on TV shows, pop music, toys, junk food, movies, product
brand names, commercials -- in short, stuff. "Greed" doesn't measure
what you know, it measures what you consume.

It's crappy, cynical, mean-spirited
programming that regards Americans as piggy, brain-shriveled slaves to
advertising, the almighty dollar and crappy, cynical, mean-spirited programming.
Watch "Greed" and, I guarantee, you will be deeply ashamed of yourself, not just
because you've given Fox another precious hour of your life, but because you'll
know the answer to every vacuous question about TV Dinners, dead celebrities and
the names of the candy bars in a bag of Hershey's Miniatures. "Greed" makes you
want to give away all your possessions and enter a monastery.