Roaches, rats and other unticketed passengers

From cucarachas to dachshunds, flight attendants contend with a mind-boggling menagerie of stowaways. 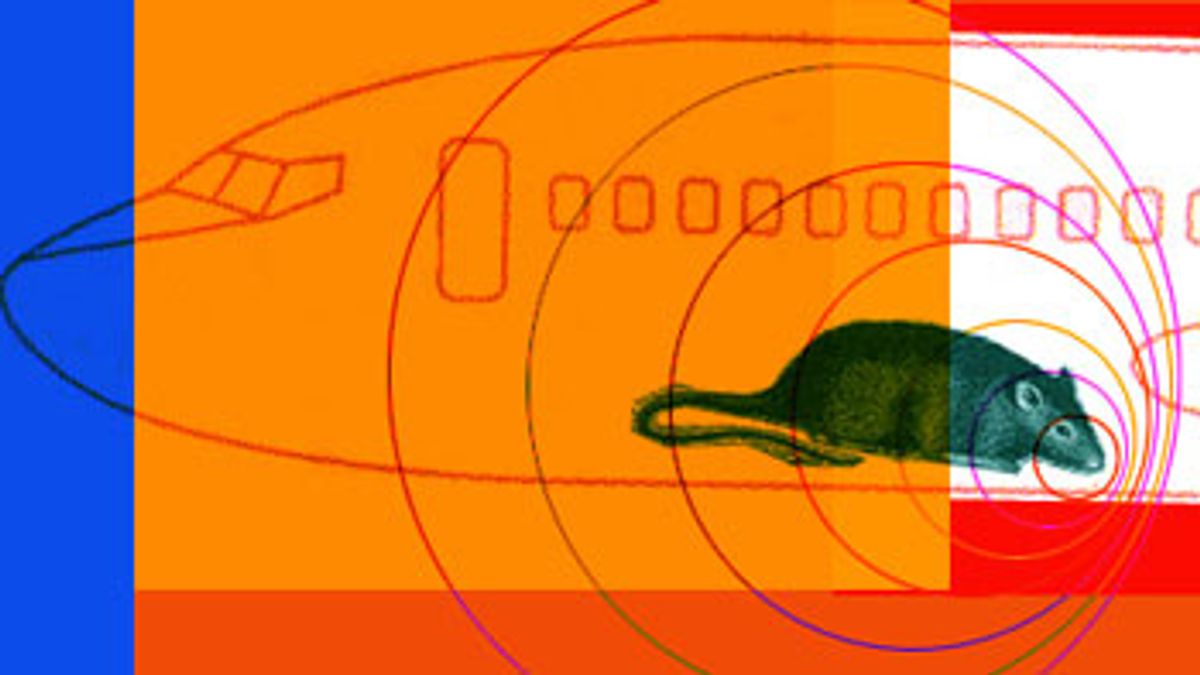 As our airplane rolled away from the departure gate and the safety video spewed the familiar airline theme music that flight attendants sometimes hum in their sleep, a hiccup-like shriek ripped through the cabin. I poked my head out of the aft galley, wondering what sort of drama was going to unfold this time. Perhaps a depraved businessman had exposed himself. Maybe one of my flight attendant colleagues had ripped her pantyhose. More likely, an infrequent flyer had reacted to the news that no meal would be served on this two-and-a-half-hour flight. Aaaaagh!

When I scanned the cabin I saw none of these things, however. What I saw instead was a terrified woman who had apparently just leapt from her seat. With a semi-steady finger, she pointed to the floor. "There, there it is!" she said.

It was a cockroach. A common household cockroach. Denizen of seedy tenements and penthouse condominiums alike. One of a breed of more than 4,000 species of cockroaches, the likes of which will continue to thrive on this planet long after mankind is annihilated by meteorites, nuclear war or 24-hour global simulcasts of the Jerry Springer show. Yes. La cucaracha. Virtually unchanged since it first began twitching its antennae some 320 million years ago. And one of their kind was just a foot away from me, scaring the hell out of one of my passengers. I watched dispassionately as the helpless insect scuttled across the matted carpet of our Boeing 727, which just happened to be headed to New York, cockroach capital of the United States.

Perhaps this particular cockroach had family there.

"Do something!" the woman demanded. She glared at me as if my flight attendant uniform resembled that of an Orkin exterminator. After fighting off an impulse to tell her to chill out, I raised my size 10 and a half Dr. Marten's boot, dropped it on the previously rambunctious (now suddenly lifeless) stowaway cockroach, then locked eyes with the grateful passenger who reacted as if I'd yanked her from the clutches of death. I scanned the cabin, wondering if some insect-rights activist would rise from his seat and threaten me with an indictment. Realizing that the coast was clear, I placed an open airsick bag on the floor, kicked the flattened corpse inside and dumped the package into a lavatory trash receptacle.

No big deal, right? Wrong. The cold-blooded murder of this particular cockroach quickly became the topic of passenger conversation. As I walked up the aisle, assuring worried passengers that the SWAT team wouldn't be needed after all, a handful of passengers glared at me. They really did. All of God's creatures deserve the right to live! I could almost hear this unspoken mantra spouting from the pursed lips of a few. I had just killed a cockroach, a semi-conscious act committed by 6 billion people every day -- in schools, homes, even in the kitchens of four-star restaurants -- and yet three or four passengers were staring at me as if the initials on my employee name tag read O.J.

Needless to say, I was shocked by their reaction. But had I allowed the cockroach to live, there would have been at least one inconsolable passenger, and dozens who would look twice when we served the chicken fricassee.

This wasn't the first time I'd seen an unwanted critter in the airplane cabin. Nor was this the first time a passenger has asked me to "do something" about it.

In addition to dispatching the occasional cockroach, I've swatted flies and moths, cornered a mouse, chased a wayward bird until it flew out of an exit door (the plane was on the ground in the Dominican Republic at the time) and recovered a dachshund who sprinted to the first class cabin after being let out of its carry-on kennel by a heartsick owner.

When we finally caught the diminutive doggie and demanded that the owner place him back in the container, the dog whined incessantly. This prompted a heated debate between passengers and cabin crew. As long as the dog was in its owner's arms, he was quiet. When forced back into his tiny under-the-seat-in-front-of-you kennel prison, he yelped like a coked-out hyena.

If it were up to me, the owner would have been allowed to hold the dog in her arms, if for no other reason than to spare other passengers from constant auditory stress. But the Federal Aviation Administration mandates that carry-on pets are not -- repeat, not -- to be let out of their kennels at any time. If a concerned passenger saw an uncaged pet and decided to phone the FAA with a report, the airline, believe it or not, could quite possibly face a fine. This is yet another case of airline regulation gone amok. With the noisy pooch locked in his container, the yelping continued. Finally, after a disgruntled passenger threatened to do to the dachshund what I had done to the cockroach, we let the dog out of the kennel and into the arms of its appreciative owner.

But birds and cockroaches and runaway dachshunds are minor annoyances compared with what happened on a few recent flights.

According to news reports from Aug. 31, a rat was sighted on an Air New Zealand flight from Los Angeles to Auckland via Papeete, Tahiti. That's right. A rat. The coarse-haired, pink-tailed, long-snouted rodent that, along with the aforementioned cockroach, will one day inherit the Earth.

"The rat was sighted by crew, but their attempts to catch it failed when it ran to the rear of the aircraft," said Air New Zealand spokesman Cameron Hill. (Yeah, right. Most flight attendants get squeamish if they're asked to carry a loaded barf bag to the lavatory. Try to get one to corner and catch a rat, and see what kind of response you'll get.) "Later in the flight," Hill continued, "a passenger in business class felt something on her right leg, lifted her blanket and found the rat on her knees."

Now that's something to scream about.

When the flight finally landed in Auckland, quarantine officials were there to meet it. A search of the airplane (and passenger baggage) failed to turn up the rodent, which, according to witnesses, was the size of a small cat. The plane was subsequently quarantined and fumigated.

Seven weeks earlier, on July 6, a similar fiasco took place aboard an Air India flight. This time the plane was preparing to depart Dubai, United Arab Emirates. As the New Delhi-bound aircraft rolled down the taxiway prior to takeoff, passengers reportedly shouted that there was a rat on board. Passengers and crew disembarked while the plane was fumigated. Sixteen hours later the plane was finally on its way, but the rat was never found.

Canadian Airlines joined the in-flight rat race back on Feb. 17, 1996. Apparently, a clever rodent escaped from a catering container shortly after the plane took off from Hong Kong. Realizing the potential problems a loose rat might create if the plane continued all the way to Vancouver, the pilot decided to divert the aircraft to Tokyo. Passengers were subsequently booked on another flight.

Many were angry, not simply because of the inconvenience, but because they suspected the rat was a prank. It seems that the plane, filled with holiday merrymakers, had taken off near the start of the Chinese New Year, which had begun the preceding Monday. The Chinese calendar works on a 60-year cycle, with the years grouped under 12 revolving animal designations: tiger, dragon, snake, monkey, rabbit, horse, sheep, rooster, dog, pig, ox and one other. You guessed it. The Chinese New Year of 1996 was the "Year of the Rat."

Which brings us back to my flight to New York. After the on-board cockroach episode, our plane landed at LaGuardia without further insect appearances. But later that night, after partying in and around Greenwich Village, I found myself staggering past Washington Square Park. Beneath the glow of dim-watted street lights, I saw movement from the corner of one out-of-focus eye. Although the park was closed to humans at this late hour, it was crawling with rats. Dozens of them. Maybe more. They scuttled around the rim of metal trash cans. Bolted between lonely tufts of grass. They bounded happily through the blighted plaza like children who'd been let out for recess. OK, I was somewhat inebriated. But I swear some rats formed a conga line on the seat of a broken park bench.

Perhaps that 24-hour global simulcast of the Jerry Springer show has already begun.