The last trial in the dragging death of James Byrd Jr. is delivered to the jury. 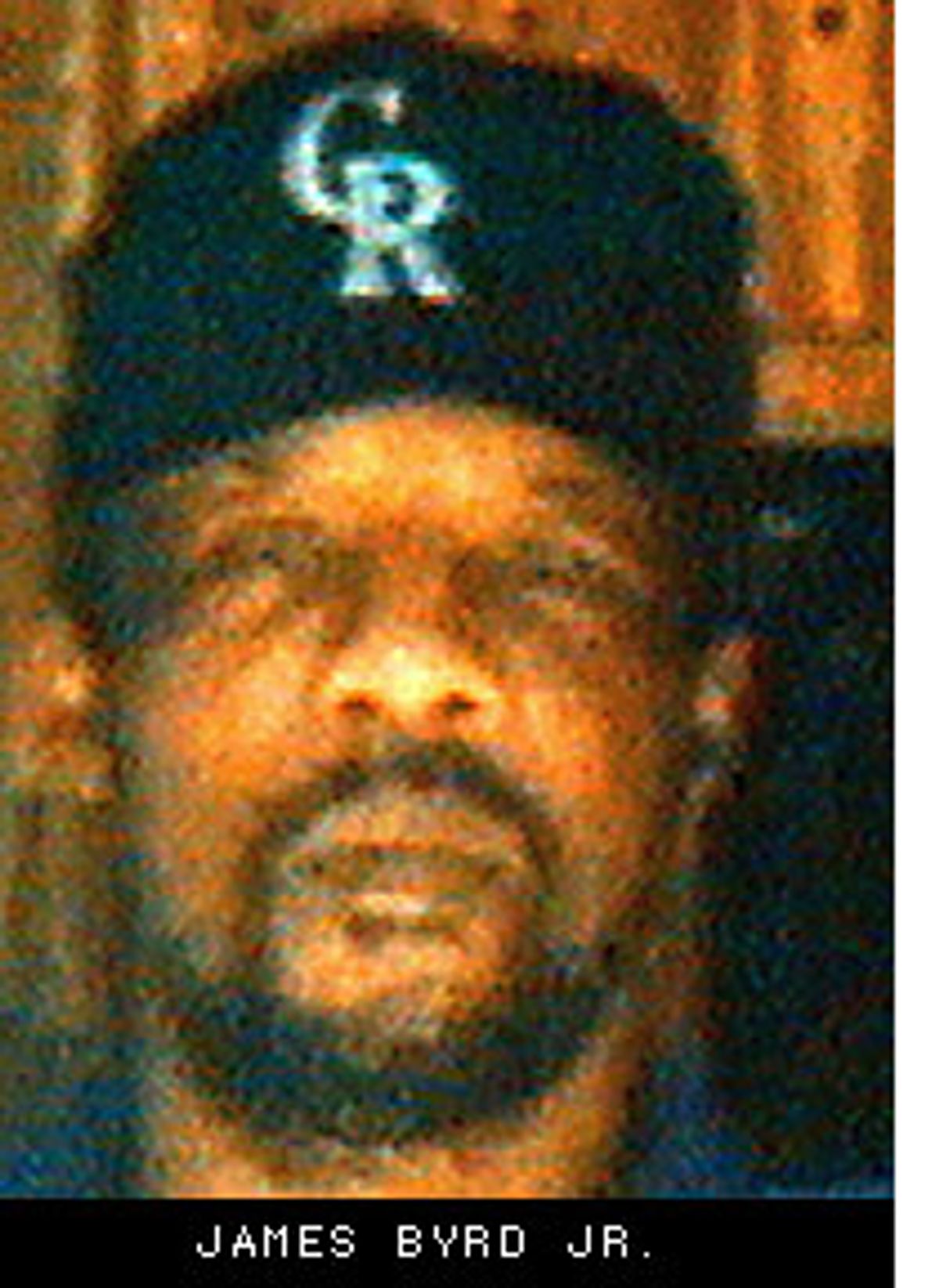 Scarcely a week after it opened, the trial of the last defendant in the racially motivated dragging death of James Byrd Jr. was delivered to the jury for a verdict Wednesday.

The all-white jury retired to deliberate the fate of defendant Shawn Berry, who could face the death penalty if convicted.

In closing arguments, the prosecution, which has struggled to find a credible motive for the crime, positioned Berry as something worse than a racist. "There were three people involved ... that
night," said Assistant District Attorney Pat Hardy. "Of the three people involved, [Berry] was the worst of the bunch."

Convicted co-defendants Bill King and Russell Brewer may have had twisted, abhorrent beliefs, he continued, "but at least they believed in something. Shawn Berry
did it for nothing but the fun of it."

In his closing arguments, defense attorney Lum Hawthorn sought to assure the
jury that it was not responsible for removing the stain of the
infamous hate crime from Jasper's collective conscience.

"There
is no need to convict Shawn Berry to serve justice," he told the
attentive jury. "Justice has been served in this case. James
Byrd's murder has been avenged. Two people have been convicted
and given the death sentence. For justice to be served [again],
you must return a verdict of not guilty."

By East Texas standards, Berry is a standard-issue guy next door: A drunk-driving, mud-hogging, girlfriend-slapping rowdy willing to think the best of others -- his racist friend King in particular -- because of his massive, much-maligned heart of gold. Or so reads the final defense script after the testimony of 22 witnesses -- including Berry and 16 people who vouched for his kind, if cowardly, nature.

Before a jury of seven men and five women, Berry took the stand
in his own defense Tuesday. Berry's defense hinged on the claim that he's a guileless, scared-rabbit sidekick who became trapped on a ride that started out as a small-town
chick-cruise and rapidly degenerated into a brutal hate crime. Berry claims that
only after the ride to the woods was well under way did he begin to suspect
that maybe the trip was something more sinister than the average Saturday night
mud-hog session spent driving the dirt logging roads running deep through the
piney woods ringing Jasper. Even when King began spouting off about "scaring the
shit out of this nigger" and "whooping his ass" Berry, who had known the ex-con
for years and lived with him for a month or so, says he never thought anything
bad would happen.

"I didn't think anything of it," a pallid Berry said after
defense attorneys called him to the stand. "Anytime Bill King has ever said
anything [like that], he hasn't gotten near the person. Never."

When the evening of carousing degenerated into a full-blown nightmare -- replete with race-hating,
life-threatening rednecks giggling over the specter of a headless black body careening wildly down the highway after their truck -- Sean wilted in horror, the defense argued. He stood by and helplessly watched as his two friends tore a terrified Byrd from the front seat of his truck and began to beat and stomp him into unconsciousness.

As Berry sat on the stand Tuesday, the defense walked sentence by sentence
through some seven signed confessions he had given to the police within days of
his arrest for Byrd's murder. After each sentence, Berry explained whether the statement was true; and if it wasn't, why he had lied. The main lies
involved the points at which he allowed King to drive, and whether
he ran away while the attack went on.

"I had the impression that just being there made me guilty," he said.

On cross examination, District Attorney Guy James Gray never seemed to get beyond the
argument that Berry was guilty of remarkably poor judgment and possibly an
immoral degree of cowardice. "You clearly knew that Bill King is no sweetheart,"
Gray admonished the defendant. "You knew that if you ran with Bill you'd get
into trouble. Still you chose to hang out with him."

"I thought it was the same ol' Bill," Berry told the jury. "You can ask anyone that
ever knew Bill if he'd back up what he said, and they'd all say no -- I just let
it go."

Earlier this year, Gray won death sentences for both King and Brewer the murder. But unlike Berry, both
were easy convictions in a brutal attack that had all the hallmarks of a
racially motivated hate crime. Both sported racist tattoos and had overt ties to
white supremacist groups, in and out of prison. Gray had the evidence -- and the
motive -- to walk in and nail both men as easily as if he were swatting flies.

In some ways, Berry would seem to be equally easy to convict. The vehicle that
dragged Byrd to death, a gray pickup, belonged to Berry. Tools bearing his name
and initials littered the route the killers drove. His DNA appeared on
cigarettes at the scene of the beating and on Byrd's blood-stained jeans and
shoes. Moreover, unlike either King or Brewer, he confessed to being at the
scene of the crime. A 24-year-old with a reputation
for law-scraping fuck-ups and a documented history of domestic abuse against
his beauty-queen girlfriend, Berry has cleaned up beautifully for the courtroom.

But in trying the case, the prosecution has made a big mistake by entirely
ignoring the need to tell the jury a coherent story about how and why the crime
was committed and what motivated the defendant to suddenly move from being a
sometime girlfriend-slapper -- a charge documented with two affidavits signed
by his girlfriend, Christy Marcontell -- to a raving lunatic capable of tying a live
man to the back of a truck and dragging him to his death.

Instead of worrying about creating a coherent narrative, the prosecution, led by
Gray and assisted by Hardy, a jujitsu-jousting, bolo tie-wearing caricature
of a Texas lawman, simply dumped a mound of evidence in the jury's lap,
seemingly without art or attention to doing anything that might fairly be called
"building a case."

Having dumped its load -- a succession of photos depicting footprints and "expert"
testimony proffered by sometime deer-hunting investigators with minimal training
in fingerprinting techniques and sexual assault -- the prosecution rested its case on Friday.
The telling of the story of the crime was left entirely to the defense team.

Where the prosecution relied on a mountain of poorly contextualized evidentiary
information before resting its case Friday, Hawthorn's stroke of genius has been to humanize Berry. Day after day, Berry has sat sandwiched between Hawthorn and Marcontell, a would-be Nicole
Kidman look-alike who has stood by her man to the point of ardently testifying
that when a man like Shawn slaps his woman, he's not beating her, even if she
ends up on the floor.

Witness after witness, Berry has turned his broad
Campbell's Soup-kid face attentively to the jury. Monday, some 16 witnesses --
black and white, young and old, male and female -- testified that Berry would avoid
fights unless provoked, and was often driven to tears at the prospect of them.
Others attested to the fact that Berry had plenty of black friends and that he
often picked up pedestrians he didn't know, both black and white. Still others
testified that Berry, like any good East Texas citizen, spent countless hours
swilling beer and off-roading. All swore that he was neither racist nor hateful.

In the end, Gray has succeeded only in getting Berry to admit to tampering with
evidence, which he has testified to doing when he took the truck and chain used
in the killing to the car wash. But it seems clear that capital murder is beyond
the prosecution's grasp. Monday afternoon on the courthouse lawn, the district
attorney seemed to lack all sense of conviction or direction about the case. In
an off-the-cuff remark to the press, Gray directly echoed the 16 defense
witnesses who, to a person, asserted that Berry is not and has never
been a racist.

"That boy is not a racist," Gray mused. "Or at least he wasn't
before this crime. What you have here is a motiveless crime."

Ashley Craddock is a journalist living in San Francisco.