I was a human crash-test dummy

For 15 years, a professor gave his body for human impact-survival research -- and lived to tell the tale. 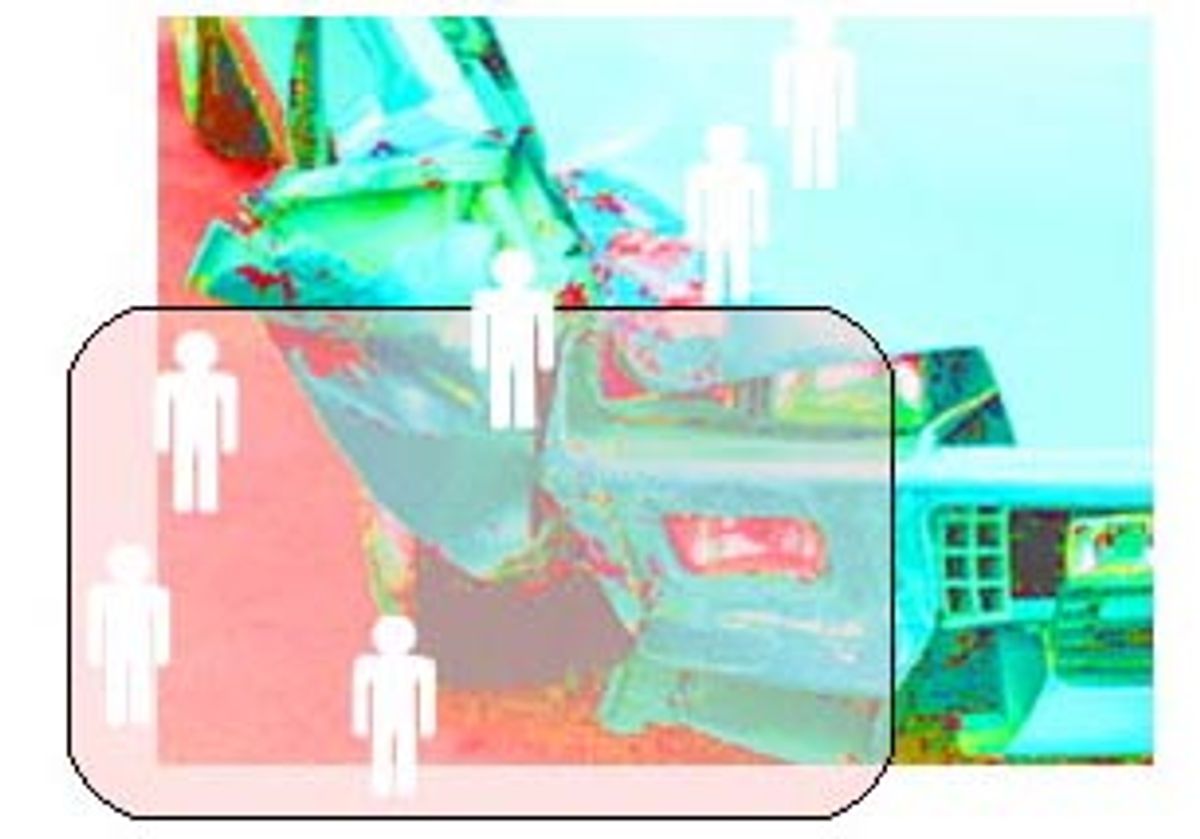 "We needed some information on what the human body could stand." This is what retired Wayne State University biomechanics professor Lawrence M. Patrick will tell you if you ask him why he agreed to be slammed in the chest by a 22-pound metal pendulum, to hurl one knee repeatedly against a metal bar outfitted with a load cell and to undertake some 400 rides on a rapid-deceleration sled that mimics the effects of a car crashing head-on into a wall. From 1960 to 1975, Lawrence Patrick was a human crash-test dummy.

Patrick's field of study was a grisly offshoot of the automotive safety industry known as "human impact survival research." You are perhaps wondering, as I did: Why didn't they use crash-test dummies? This was the other side of the equation. A dummy could tell you how much impact a crash was unleashing on various dummy body parts, but without knowing how much impact the real body part can take, the information was useless. You first needed to know, for instance, that the maximum amount a rib cage can compress without causing injury to the soft wet things inside it is two and three-quarter inches. Or that the speed required for a human skull to penetrate a circa-1964 windshield is 12.9 mph. Things like that.

Although Patrick would admit to nothing beyond getting "a little sore," he and his students endured a stunning amount of pain in the name of improved automotive safety. His 1963 study "Facial Injuries" includes a photograph of a young man who appears to be resting peacefully with his eyes closed. Closer inspection hints that, in fact, something not at all peaceful is about to unfold. For starters, the man is using a book titled "Head Injuries" as his pillow (uncomfortable, but probably more pleasant than actually reading it). Hovering just above the man's cheek is a forbidding metal rod identified in the caption as a "gravity impactor." The text informs those of us injudicious enough to actually read it that "the volunteer waited several days for the swelling to subside and then the test was continued up to the energy limit which he could endure." Part two of the study sought to examine "the mechanism of fracture," the aforementioned fracture being delivered not by our friend the gravity impactor, but by high-speed, pneumatically driven rotary hammer blows to the face.

There is only one kind of human that will put up with this, and that is a dead one. God help you if you lived in the vicinity of Wayne State University in the mid-'60s and you donated your body to science. Patrick and his men would take as much as they could, and then, as he put it, "we continued on with cadavers up into the injury range." In the name of safer commutes and road trips, the dead have been strapped into deceleration sleds and crashing automobiles, hit in the head with steel pendulums, sent through windshields and mowed down at mock intersections.

I asked Patrick, who is 79 now, if the public was outraged over this particular scientific usage of the dead. There was a pause between all our communications, as if he were speaking to me from some third world nation that was only now getting around to installing overseas phone lines. It was just the way he spoke, neutrally and somewhat formally, as though he were reading from a script for a '50s propaganda film. "Some were, yes ... But the testing was done under strict regulations ... The cadavers were treated with respect ... Their faces were covered and they were dressed."

I asked him what kind of outfit the cadavers wore for the occasion. The pause was slightly longer this time. "They were dressed in a leotard." I tried to imagine Patrick muscling a 170-pound corpse into a Danskins leotard. I wanted to know more. I wanted to ask what color the leotards were, and whether the researchers ever busted out laughing at the absurdity of it all. But I couldn't. It wasn't in the script. I said, "I see."

Public relations considerations aside, there were drawbacks to stiffs, stiffness being prime among them. In a 1964 research paper on heads crashing through windshields, Patrick wrote that the joints of cadavers had to be "loosened by manipulation to the point where they had about the same resistance ... as a living human with muscles partly tensed." This after screw-mounting accelerometers on the back of the skull and replacing the brain with gelatin of like weight and specific gravity. Dressing the things began to seem like the least of a lab man's worries.

The main problem with corpses was that there weren't enough of them to go around. For this reason, much of the early impact survival work was carried out on animals. A description of the second annual Stapp Car Crash Conference, in 1956, begins like a child's recollections of a trip to the circus. "We saw chimpanzees riding rocket sleds, a bear on an impact swing ... We observed a pig, anesthetized and placed in a sitting position on the swing in the harness, crashed into a deep-dish steering wheel at about 10 mph." Steering wheels back then were not collapsible, and had a disagreeable habit of impaling the driver's chest should the car's front end be smashed in. By 1964, steering columns had killed 1.2 million drivers, and researchers like Patrick felt justified in their treatment of the animals. (The Society for the Prevention of Cruelty to Animals did not, and the event inspired "vehement protest.")

Pigs were popular subjects because of their similarities to humans "in terms of their organ set-up," as one industry insider put it, and because they can be coaxed into a useful approximation of a human sitting in a car. As far as I can tell, they are also similar to a human sitting in a car in terms of their intelligence set-up, and their manners set-up, and pretty much everything else excluding possibly their use of cupholders and ability to work the radio buttons. The Belgian hare was also considered a good sitter. A paper in the "Proceedings of the Seventh Stapp Car Crash Conference" -- another book best used as a pillow -- includes a drawing of an adorable little bunny sitting upright in an adorable little Erector Set-like jeep. Less adorable was the experiment's objective: "To produce injuries sufficiently severe to cause death and possibly decapitation of the test animals."

By now, of course, the tolerance limits of the human body have long ago been worked out, and dummies and computers stand in for corpses and lab animals. I talked to a crash-test dummy engineer, Mike Beebe, who works at Applied Safety Technologies Corporation in North Milan, Ohio. During calibration, Beebe said, modern crash-test dummies endure the same sorts of indignities that humans and pigs once did: The Head Drop ("we drop its head on a steel plate"), the Thorax Impact ("we impact its chest with a probe") and the Torso Flexion Test ("a clamp-his-legs-down, bend him-over kinda thing").

I asked Beebe if a lot of sadists apply for work at his company. "No," he said, "but I'll tell you, it sure is a stress reliever sometimes to go out and smack a dummy around." Beebe expressed guarded admiration for Patrick and other human forebears of the crash-test dummy. "It takes an interesting combination of courage and uh, other things, to make you do that."