Atom Egoyan's follow-up to "The Sweet Hereafter" is a dank and claustrophobic thriller. 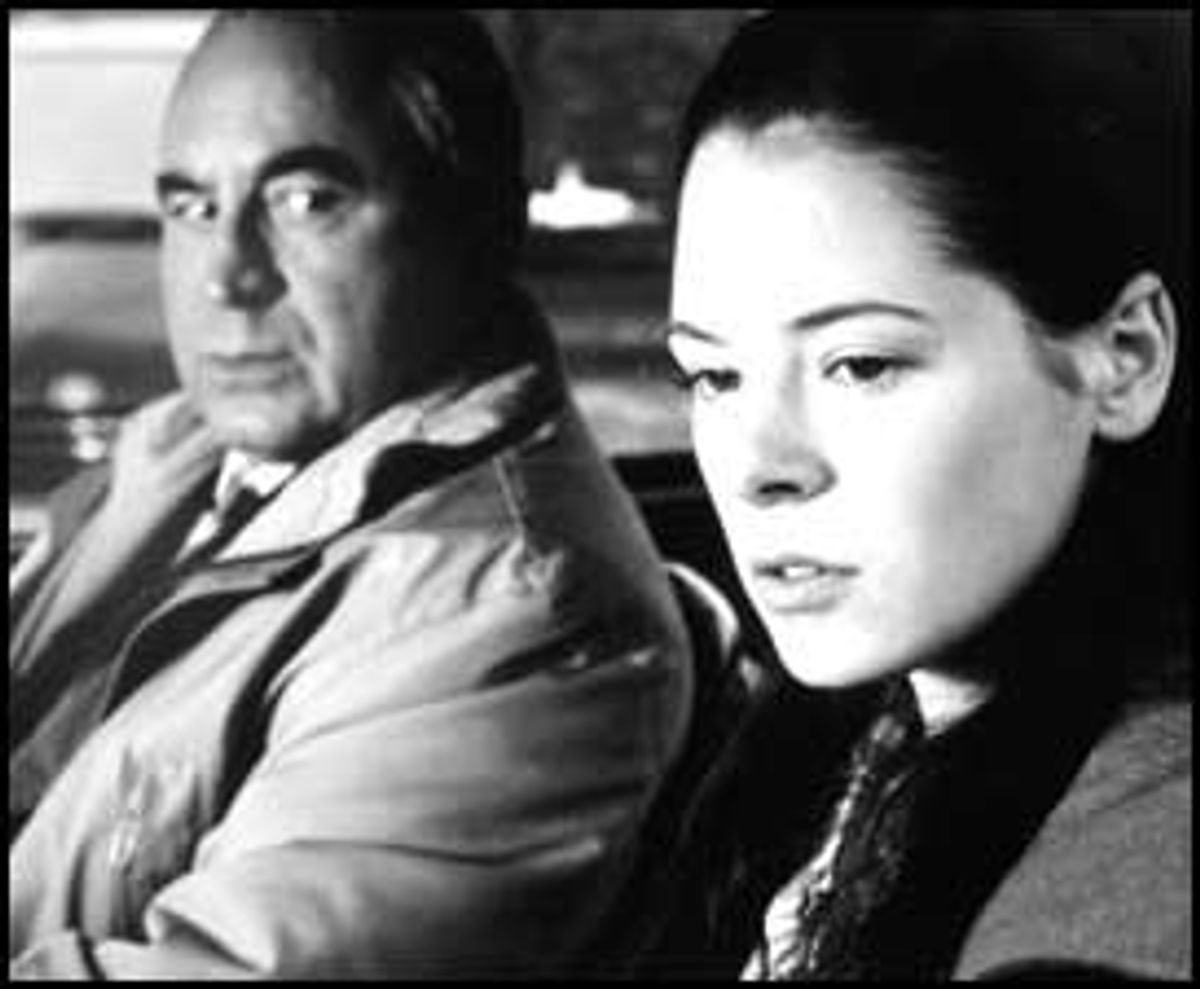 Like his fellow Canadian David Cronenberg, Atom Egoyan has become respectable. (After a decade or so of celebrity, mostly for the wrong reasons, Cronenberg may have gone back into film-geek obscurity, which should earn him some kind of medal.) Both were figureheads of the '80s art-film underground who, faced with the collapse of that historical moment, pursued their personal obsessions through literary adaptations, like hipster versions of the Merchant-Ivory factory. I actually found Cronenberg's "Naked Lunch" a vast improvement on its incomprehensible source material, and his version of J.G. Ballard's "Crash," while problematic on many levels, had a dreamlike intensity. Egoyan's mid-career shift seemed smoother; his 1997 version of Russell Banks' "The Sweet Hereafter," about a small town haunted by a horrifying school-bus accident, has the meditative sense of mystery of the director's best work, minus the self-referential musing about technology.

That brings us to "Felicia's Journey," Egoyan's adaptation of William Trevor's 1994 novel, which takes the director away from the northern light and underpopulated spaces of Canada for the first time. This is a hard film to sit through -- it's a dank and claustrophobic little thriller, though it eventually builds to a powerful climax -- and a hard film to get your head around. I admired it a lot more than I liked it. Certainly "Felicia's Journey" has ambitious, even noble goals, and it's anchored by terrific performances from Bob Hoskins and young Irish actress Elaine Cassidy. Ultimately, the marriage between author and director seems misguided, and the resulting film, despite many powerful moments, is a disconcerting muddle.

Fundamentally, "Felicia's Journey" is a story about a vulnerable girl and a predatory, evil man that sees the human loneliness in each of them. For Trevor, an Irish writer who has lived in England for many years, this is also arguably a parable about the drama of aggression and victimization that these two countries have play-acted with each other over the centuries. It is not, however, a tale of Information Age disconnection, in the vein of early Egoyan films like "Family Viewing" and "Speaking Parts," and the director's attempts to push the film in that direction only cloud the already muddy waters. If Egoyan handles the thriller mechanics of the central narrative skillfully, he is utterly at sea in the political-psychological subtext of "Felicia's Journey," and his presentation of Britain, Ireland and relations between them seems canned and stereotypical.

At its best, Egoyan's screenplay strikes a deliberately ambiguous tone blending existential horror and black comedy, as if he were aiming somewhere between Stanley Kubrick and Dennis Potter. If Joe Hilditch (Hoskins) weren't an apparent serial killer -- don't worry, I'm really not giving anything away -- he'd be a familiar British figure of fun. Hoskins plays him as a fussy, middle-aged bachelor with pretensions toward refinement, who only listens to scratchy recordings of ancient English pop music and dines alone every night, using opera glasses to watch videotapes of his mother, a one-time celebrity chef (Arsinie Khanjian, Egoyan's wife, in an unfortunately camped-up performance). On the other hand, Felicia (Cassidy) is a figure not of comedy but of almost mythic tragedy -- the pregnant, abandoned country girl whose voyage to the great metropolis can only end badly.

As is typical with Egoyan, the structure is complicated and the layers of cinematic technique and texture are even more so. We travel both forward and backward in time, to the dismal County Cork village Felicia has fled and into Hilditch's unhappy childhood. We venture from the drab naturalism of the film's present tense in Birmingham into iridescent color video and black-and-white 1960s television imagery, never quite sure if we are seeing memory, fantasy or samples from Hilditch's macabre tape library. But all this technical adroitness -- I'm tempted to use that awful word "cleverness" -- can't hide the fact that "Felicia's Journey" offers few surprises.

Beyond the central action-movie question of whether Felicia will escape her encounter with the sociopath who gradually entices her into his web, this film's universe obeys predictable rules. Hilditch is a made-to-order monster, with his catering-manager job, his charming antique Morris car and his mother fixation. Felicia is a pure innocent who believed the lies her beau Johnny (Peter McDonald) told her before disappearing to England with no forwarding address, while her stern father (Gerard McSorley) is an Irish nationalist of the most unforgiving, moralistic variety. He excoriates Felicia as a "whore" and tells her that rumors have it Johnny has joined the British Army. "You're carrying the enemy within you," he mutters darkly.

Although I have quibbles with Trevor's version of contemporary Ireland (Felicia's father seems like an Irish rural type out of 1949 rather than 1994), he understands these fusty archetypes and knows what he wants from them. Egoyan is obviously ill at ease, and his attention keeps wandering to the comforting shimmer of the nearest cathode-ray tube or the nuclear-reactor towers that loom over Birmingham's motorway. We are virtually barraged with explanations for Hilditch's homicidal tendencies: His mother publicly humiliated him; he can't get a date; he receives messages from television (an old Hollywood version of Salomis dance) and signs in hospital waiting rooms ("BLOOD BLOOD BLOOD"). But as any horror fan can tell you, true evil never needs a justification.

"Felicia's Journey" builds tangible and sinister momentum the more it focuses on the finely wrought contrast between Hoskins, always a master of actorly economy, and the heartbreaking Cassidy, wholly convincing as a miserable girl almost unaware of her beauty. Hoskins plays Hilditch as a gentle psycho, a killer of taste and discretion. He sees almost immediately that Felicia is adrift in Birmingham, with little chance of ever finding her Johnny (who doesn't want to be found in any case). But he wants God, or Felicia's own despair, to bring her to him. He never tries to lure her into his car, for instance -- the second time they meet, he tells her he'd be happy to give her a lift, only he's just done his shopping and there's no room. Even after he has won her confidence, he repeatedly tempts fate, driving her to a factory where she thinks Johnny may work, or taking her to a pub where Irish immigrants hang out. "Drink some of that tea while it's warm, dear," he purrs with motherly concern in his North Country accent. "The goodness is in the warmth, they say."

Hilditch reels Felicia in like an expert angler does a trout, and he apparently wants her to give up, the way a trout will after a lengthy struggle. He lets her come and go, but quietly pockets her money so she won't go far. She stays briefly with a charismatic West Indian evangelist (Claire Benedict), who from then on hovers at the periphery of the story offering such cryptic pronouncements as "None of us can flee the one who dies, for the one who dies waits for us." Hilditch even invents a fictional wife and then kills her off, filling his house with funereal flowers and haphazard piles of women's underwear. Is this a strategy to wear down Felicia's resistance, or just the demented, symbolic act of an obsessive? In Hoskins' perfectly opaque performance, it becomes clear that Hilditch himself has no idea. At his greatest moment of truth, when Felicia's journey nears its culmination, all he can come up with is "I am lonely sometimes in my house. Often, I am lonely."

Although I want to avoid spoilers, readers of Trevor's novel should know that Egoyan has significantly altered its ending. Clearly a director with Egoyan's record of independence and integrity has earned the chance to go his own way, but I can't help seeing this as more evidence that he's uncertain about the theme and significance of "Felicia's Journey." Even a second-rate Egoyan, I should add, is superior to many other filmmakers' best efforts. There are fragments of a great movie inside "Felicia's Journey," but Egoyan's trademark hypnotic imagery, and moments of piercing transcendence, can't quite wriggle free of the clumsy literary adaptation that contains them. Such are the fruits of respectability.