This Ichabod is a tortured, if not terribly bright, goth dreamboat. 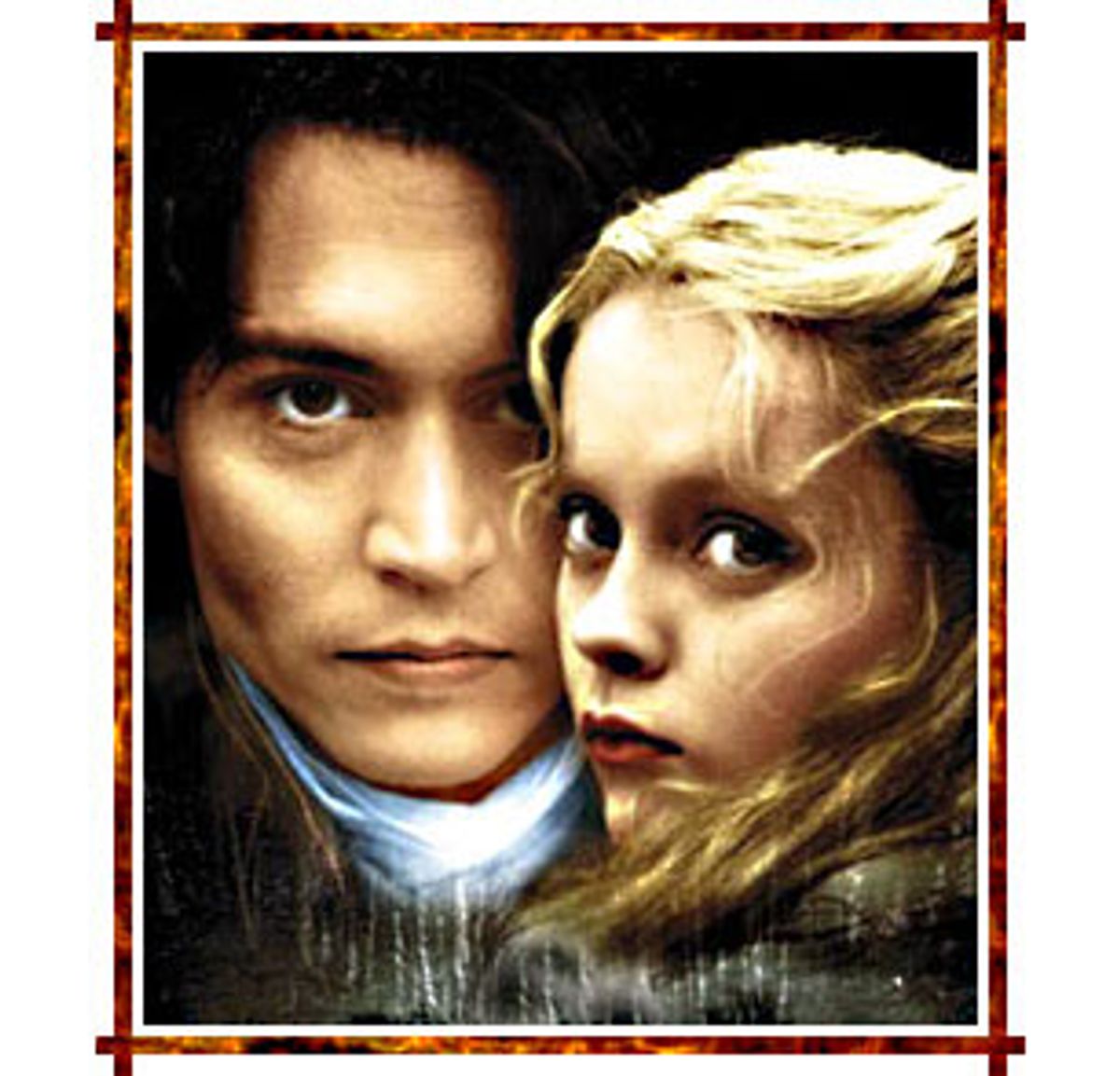 A friend once described opium to me by explaining how it made him feel both
drowsy and intensely, sensitively awake. That's how I'd describe the
opening shots of Tim Burton's "Sleepy Hollow," a movie that begins working
its visual seduction from its earliest images: a pool of sealing wax
spilling onto a piece of paper like crimson blood; a carriage rambling
through a countryside rendered diffuse in smoky blue light. The look
of Burton's Gothic dream landscape, both lulling and energizing, is vested
with so much power that it could almost substitute for narrative drive.
With each successive image, I found myself asking, "What's going to happen
next?"

In Burton's loose, highly stylized re-imagining of Washington Irving's "The
Legend of Sleepy Hollow," Ichabod Crane (Johnny Depp) isn't a knobby,
awkward schoolteacher but a constable who's prone to rather
dignified-looking bumbling. The story opens in 1799 New York: Ichabod has
been assigned to investigate a number of horrific murders upstate, in which
people's heads have been lopped off (with a fire-hot sword, no less) by the
Headless Horseman. The Horseman was formerly a ruthless Hessian mercenary
(played in the flashback sequences by a deliciously deranged Christopher
Walken) who'd been beheaded and plopped into a sloppy grave by
Revolutionary War soldiers, and who now haunts the nearby wood doing his
dirty work.

Crane -- who keeps his painfully obvious observations in a beautifully
illustrated and calligraphic book, a symbol of his yearning to mask his
inadequacies with pure style -- doubts that the Headless Horseman is really
a ghost and begins to suspect that the town elders are somehow involved.
Meanwhile, he also faces recurring nightmares based on his own childhood
trauma, as well as a burgeoning attraction to a young woman of the town,
Katrina Van Tassel (Christina Ricci), who dabbles in witchcraft.

Depp isn't Irving's Ichabod Crane, but it hardly matters. With his
translucent, silent-film-star skin and lovely hollowed cheeks, this Ichabod
is a tortured, if not terribly bright, goth dreamboat. Depp gives even his
awkward, clueless stabs at scientific observations an almost debonair
quality. And the way he hides behind his young friend and helper (Marc
Pickering) in times of terror plays up his endearing fragility. Depp's wit
and cunning are nicely understated here, lurking just beneath his somber
black topcoats and high, winged collars. His stammering and fake-confident
strutting give the movie just a touch of brightness, without disturbing its
brooding undertones.

Ricci suits Depp nicely as the inscrutable and luscious Katrina: she's both
a quiet sexpot, capable of ruffling the rather straitlaced Ichabod's
feathers, and a mysteriously calming presence. (In one scene, she meets
Ichabod in the wood, astride a white horse and draped in a white cloak
embroidered with red roses; the sight of her is simply breathtaking.)
Miranda Richardson as Lady Van Tassel, Katrina's stepmother, is crisply
enjoyable, and her bald-eyebrowed look alone is a source of weird
fascination. Burton has a knack for choosing the right look for each
character -- think of the way the bruised-looking, sleepless-night eye
makeup Depp wore in "Edward Scissorhands" seemed to underscore the
character's essential conscientiousness -- and he uses those skills
beautifully here.

Burton also has a keen eye for casting. As the town elders, Michael Gambon,
Richard Griffiths, Jeffrey Jones and Michael Gough all have that perfect
look of depraved authority. And in a witty homage to Hammer horror films, he's cast Christopher Lee as a stonily severe judge.

The plot falls short on discernible logic now and then, but that's hardly
an issue. "Sleepy Hollow" is all about visuals, music and mood, about being
swept away by what's on the screen. Danny Elfman's music is haunting and
jaggedly elegiac, the perfect underpinning to the movie's look.
Cinematographer Emmanuel Lubezki brushes nearly every frame with a bluish
cast: This Sleepy Hollow is a wonderland of misty coolness, of horizons
defined by craggy trees, of shaded woods holding tight to their secrets.
The Horseman himself is a magnificent and horrifying creature, galloping
out from the maw of nowhere, his sword brandished like a warrior's spear,
his cape floating around him like malevolent squid ink.

And since this is a Tim Burton movie, it only figures that latent childhood
fears should figure prominently. "Sleepy Hollow" has an R rating, although
the cartoonishly grisly flying heads aren't particularly distressing (and
overall, the movie is nothing like its mean-spirited predecessor "Mars
Attacks"). What makes "Sleepy Hollow" so adult and finally so indelible is
the gorgeous, spellbinding quality of its nightmare visions; these
terrifying dreams are imbued with an almost tranquilizing beauty. A
youthful mother lights a revolving lantern for her young son, sending
visions of witches on brooms and spooky goblins swirling around the walls.
Yet the sequence isn't played for creeps -- if anything, there's more a
sense of wonder to it than anything. Ichabod's visions of his own beautiful
young mother are softly shaded, shimmery, tinted with vaguely erotic
undertones like those old-fashioned hand-colored photographs. She whirls in
a garden, her dress fanning out like a pinwheel of water around her,
calling his name. The delight in the child Ichabod's eyes as he watches her
is so complete that you know for sure he's going to lose her -- and he does.

But Burton is possessed of an extremely delicate touch. While I wouldn't
recommend "Sleepy Hollow" for kids, I wouldn't hesitate to vouch for
Burton's integrity in terms of the way he deals with the fears of his
adult audience. So much of the movie is lovingly devoted to those
fears. Burton doesn't play them cheaply, or to grab at heartstrings;
instead he lavishes tenderness on them.

Children don't need to have their fears examined (plenty of time for that in adulthood). But grown-ups, busy living life, making money and raising kids of their own, tend to make the mistake of coddling their inner child, if they pay any attention to it at all. In "Sleepy Hollow," Burton sees the inner child as a small adult, like the ones you find in 18th century American primitive paintings, earnest toddlers wearing tragically grown-up clothes while clutching kittens or toy hoops. It's a way of conferring respect and a kind of dignity on the spiritual life of children, instead of treating it as something sweet and simple and eventually outgrown. Burton keeps in direct contact with it himself, and for the rest of us, he's an able guide. The other side of the looking glass lies just beyond his camera lens. All we have to do is keep awake -- and step through.