"The World Is Not Enough" 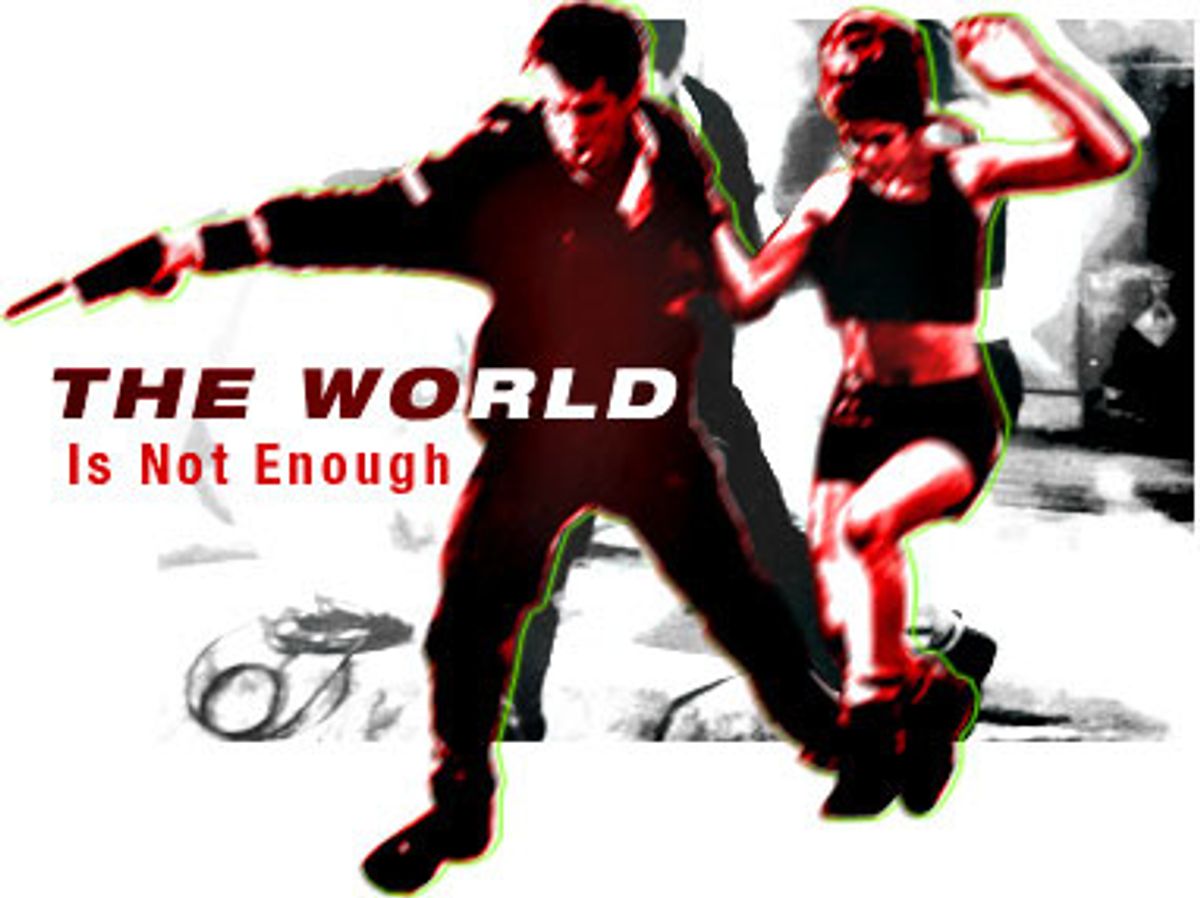 Probably nothing has done as much in recent years to make James Bond a figure of fantasy once again as the photo spread in the premiere issue of Talk magazine showing Rupert Everett as a bisexual Bond. The thought of an actor with Everett's wit and sexiness stepping into the role of 007 is enough to get you drooling. Cherish those fantasies. They'll prove to be a hell of a lot more sustaining than the latest Bond adventure, "The World Is Not Enough."

If Bond long ago became part of your fantasy life or your pop iconography, then the anticipation of a good Bond movie would probably survive even if "The World Is Not Enough" were worse than it is. But it's not even up to the level of what used to be below par for the series (say "Thunderball" or "Moonraker"); nor is it pleasantly diverting ("Octopussy"); and it's not even in the same stratosphere as the peaks -- "Goldfinger," "The Spy Who Loved Me," "On Her Majesty's Secret Service" or the best of the lot, "You Only Live Twice." It's also not as bad as the last entry, "Tomorrow Never Dies," possibly the worst-directed of all Bonds. But they share similar problems.

Somewhere along the way the people behind the series stopped thinking of Bond movies as comic books for adults and began thinking of them as action movies. The sex and luxury quotient started taking a nosedive as the destructo quotient headed through the roof. "The World Is Not Enough" opens with a chase that progresses from land to water back to land and finally to air. It's frequently spectacular and yet not terribly distinctive; you respond more to the audacity of the idea than the execution. And you're aware of how the sequence is just an excuse for explosions and all sorts of destruction. There's none of the clean efficiency you remember from the car chase through the nighttime woods in "Goldfinger," or the virtuoso ski and bobsled chases Peter Hunt devised for "On Her Majesty's Secret Service."

Perhaps the reason nearly every Bond movie now features a ski chase is that it lets the camera revel in the vistas of snow-covered space and allows for a visually uncluttered chase. The ski chase here is the movie's visual high point as Pierce Brosnan's Bond and Sophie Marceau, playing the daughter of a hugely rich industrialist who's been murdered by terrorists, are pursued by machine-gun-wielding snowmobiles that hover above them via black parachutes; appearing over the mountains, these deadly machines look like some swarm of mutant mosquitoes.

"The World Is Not Enough" offers so little of the series' Playboy fantasies of "the good life" -- swanky resorts and casinos, lush uncomplicated sex -- that when the movie tosses you a little tidbit, like a throwaway shot of the Frank Gehry-designed Guggenheim museum in Bilbao, you're almost pathetically grateful. I think I counted one vodka martini going down Bond's gullet in this movie, and he downs it fast, as if he's racing to catch a bus. I was rather more encouraged when, early on, Bond seduces British Intelligence's house doctor. I shouldn't have gotten my hopes up.

On the tally sheet of recent Bond-inspired fantasies, the casting of Denise Richards probably ranks right behind that Rupert Everett photo spread. There's probably no other current movie actress who has roused as many pornographic longings as she has (at least among the straight men in the audience). The focus is invariably Richards' fuller-than-full lips, particularly the nasty little curl of her smile.

When filmmakers take Richards' dirty-girl appeal into account, as John McNaughton did in the deliriously trashy "Wild Things," Richards practically squeals naughtiness. Here she's playing a nuclear weapons expert named Christmas Jones -- the launching pad for a few of the film's better double-entendres -- and the movie seems practically afraid of making fun of the ridiculousness of that conceit. So Richards has to stand around trying to muster some authority while snapping off her lines and sounding more like a high school kid in a snit. What's the point of casting Denise Richards in a Bond movie if not to make her into a sex fantasy? There are some obligatory shots of her wearing a tight white T-shirt in a submarine filling with water, and the poverty of pornographic imagination they represent is rather appalling. Nearly as appalling is how long it takes for her and Brosnan to do anything -- even exchange racy repartee.

Marceau, whose smudged dewiness doesn't bring much to the party, is another letdown. Marceau's Elektra (I guess her parents were inspired more by their old Doors albums than by Euripedes) is the focus of the movie's rather dull plot. She's trying to finish her late father's pipeline, while international terrorist Renard (Robert Carlyle) may be trying to destroy it. Complications ensue from Renard's having once kidnapped Elektra, who escaped by killing two of her captors.

Renard has been given a great bad-guy gimmick: An unsuccessful assassination attempt has left a bullet in his skull that inures him to pain. And damned if the fool filmmakers don't do diddly with that either. Instead of giving us a super villain crazy-high on his own power and invincibility, Carlyle looks as down in the mouth as a guy who's learned to live with terminal migraine. That glumness is appropriate, though, to the Elektra/Renard plot, which is inappropriate for the fantasy tone of a Bond movie. When "The World Is Not Enough" isn't trying to win the Thanksgiving action movie sweepstakes, it's making half-hearted attempts to be a serious espionage fiction. And that was always the material that the Bond movies opposed.

The movie does some things right, and most of them are done by the supporting characters. Robbie Coltrane, in a smashing series of lounge-lizard formal wear, returns as the Russian mobster Zukovsky. With his deadpan understatement, Coltrane exudes total corruption and revels in it.

The recurring characters are given particularly nice bits. This is the first time Samantha Bond has made an impression as Miss Moneypenny (though nothing can keep me from pining for Lois Maxwell). Judi Dench's M has been given a bigger role to play, the better for us all to bask in her authority. I can't think of another actor who could deliver the line "We will follow them to the furthest ends of the Earth if need be and bring them to justice," and not sound like a cardboard cutout. In a lovely nod to the actor who proceeded her in the role of M, an oil portrait of Bernard Lee hangs over her desk.

I wish there were more for Michael Kitchen as M's assistant, but someone had the very bright idea of casting John Cleese as the protigi of Desmond Llewelyn's Q. It's an inspired choice: They share the same dotty disdain. And Llewelyn has been given a charming, fleeting scene with 007 where he seems to be taking the bow he's earned after 17 appearances and nearly 40 years in the series.

Brosnan's another matter. He could probably play Bond at a masquerade party or in a comedy sketch. But it's almost about impossible to detect any of the character's cool sadism or sensual gusto or just plain dirty-mindedness in him. You don't even get any of the self-parody that finally made Roger Moore rather endearing. Brosnan delivers the double-entendres in the manner of a man who's trying to teach himself to swear; you just feel embarrassed by him. Imagine Sean Connery delivering the line Brosnan hands Richards as they sit on a balcony in Istanbul -- "I've alwaysh drr'eamed of having Chrishmash in Trr'key" -- and you'll be laughing for days. Brosnan was so good in "The Thomas Crown Affair" because the role allowed for his finicky quality. As Bond, he continues to be a good-looking stand-in rather than a star.

You wouldn't want to see a top-flight director with a distinctive personal style at the helm of a Bond movie. You want someone whose work is clean and efficient, adept at keeping the thing moving along and balancing the ratio of silly to serious. Apart from the ongoing documentary series (whose latest entry is "42 Up") and the first half of "Coal Miner's Daughter," Michael Apted has never had a style that is either distinctive or personal. I was grateful in the early scenes that, unlike Roger Spottiswoode in "Tomorrow Never Dies," Apted shot and cut the action sequences so you could follow what was going on. But it doesn't take long for his dull, somewhat somnambulant anonymity to take over.

The movie feels about a half-hour longer than its 128-minute running time, and though the story is fairly simple, it's complicatedly told. By the time Apted launches into the big, final set piece, it feels as if you've been in your seat for hours, and yet it all happens before you've had a chance to care. He's also not especially gifted at violence. Maybe in deference to the wrongheaded attempt to make the series more "realistic," the fight scenes have a lot of grunting and thudding rather than the swift painlessness that should characterize a Bond fight.

How hard can it be to make a good Bond movie? The best are little disreputable miracles, the lucky combination of craft and keying into the pop moment. There must be brisk, efficient directors out there who are capable of finding the right pace and tone. And there must be screenwriters who can come up with the right mix of smut and sophistication. There are plenty of worse disappointments this year than "The World Is Not Enough," but those disappointments don't have nearly four decades of audience affection built into them. Maybe it's time to start saying "God Save James Bond." The new Bond films bear the same relation to the originals as those MCI ads do to the original Looney Tunes.