Cult of the cloth

I thought I could quit any time, but the ladies of the Diapering Board had me in their thrall. 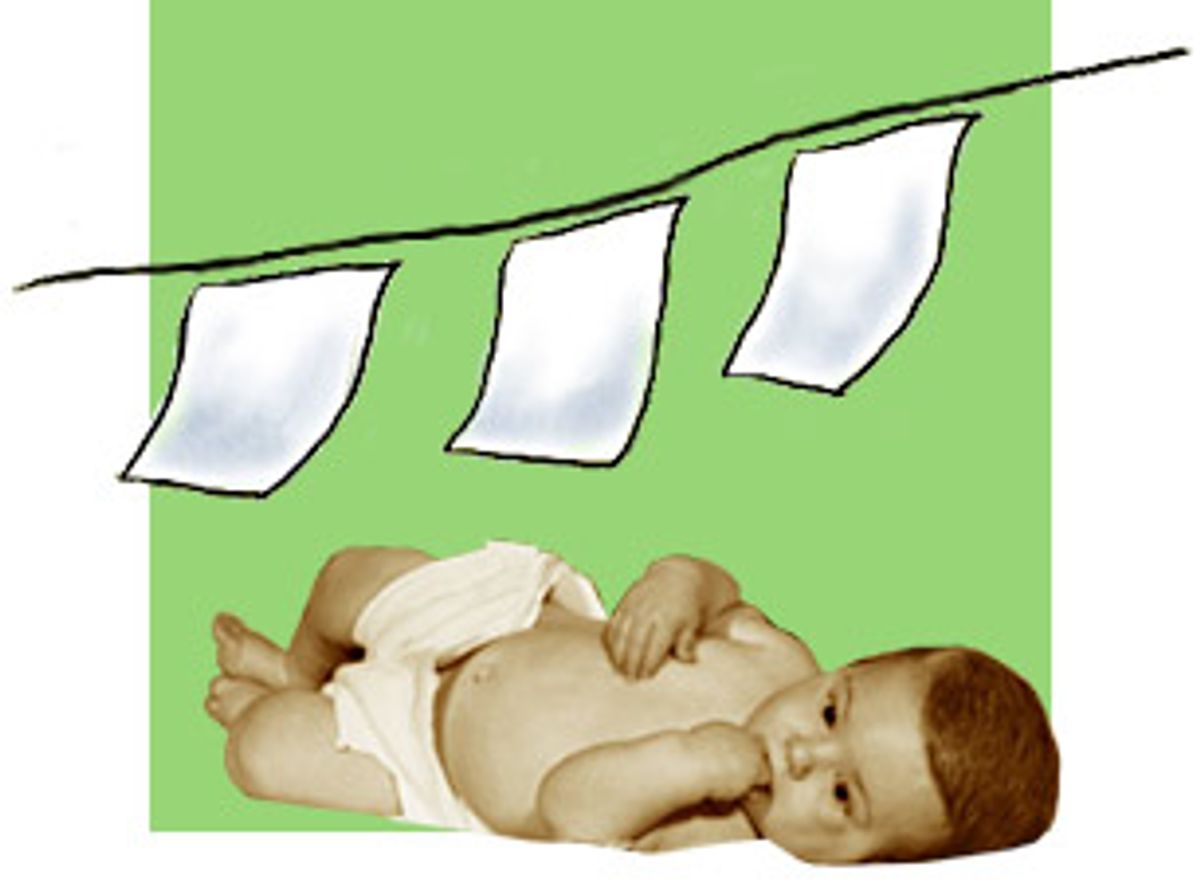 To most mothers, the Diaper Genie is a modern miracle: a diaper pail
that twists used disposable diapers into plastic sleeves to contain the
smell. When I see one, all I can think of are hermetically sealed poop
sausages. Long before my son was born, the question of diapering him
was opened by a generous friend who offered me her Genie. Without
thinking, I declined. But why? Did I want to experience baby poop's
full perfume?

Somehow I'd made an unconscious decision to use cloth diapers. This was
fortunate, because if I had been conscious, I'd have had my friend hit
me on the head with the Genie for even considering it. As another pal
and mother of three put it, "How could you use cloth when disposables
have all those wonderful perfumes and dyes?! Don't you realize that
disposable diapers are only a problem for the next generation?"

Naturally, as an inexperienced mother, I thought I knew better. Since
the parenting books I had were of no use on the subject, I hit the
Internet. Now, there's no one more anxious than an expectant mother,
except perhaps an expectant mother on the Internet. Pregnancy might not
be the best time for instantaneous, 24-hour access to thousands of
obstetric and pediatric horror stories, but few souls are brave enough
to challenge a bloated third-trimester mother-to-be when she wants
infant rash statistics at 4 in the morning.

A quick search landed me on a bulletin board inhabited solely by
"Clothies," where I discovered I was not alone in my disdain for the
Genie. I discovered, in fact, that there's currently a mini-resurgence
in cloth diapering, due in part to the popularity of "attachment"
parenting manuals, but also attributable to the Internet's ability to
foster niche interests.

Diaper manufacturers say that the use of disposables is at an all-time high; but somehow dozens of new cloth-diapering suppliers are starting up and
thriving all over the Internet. So, while this movement may not have
captured the hearts and bottoms of a great percentage of Americans, it still represents an opportunity for profit.

Despite the fact that cloth diapers are among the top parenting
recommendations made by Tightwad Gazette, the best materials are expensive. The good news: Modern designs with Velcro and snap closures mean you don't
have to stick yourself with pins anymore -- unless you really want to.
The bad news: Progress comes at a price. The new "fitted" cloth diapers can
run to $10 or more apiece -- and you need three or four dozen in each
size, plus covers.

Luckily, you can resell them on what I like to call
the used-diaper "brown market," for up to 50 percent of their retail value,
unless they're a favorite small-company design, which increase in value
when supplies run low. Since disposable diapers cost about $1400 a year for up to three years, cloth lovers can shop all day and still call themselves frugal, but only as long as they're willing to discount the labor in washing, folding and shopping.

Sadly, they all are.

As I mentioned, if I'd known how complicated the whole issue
was going to be, I'd have signed a few grand over to Huggies somewhere
in my ninth month and, uh, disposed of the question.

But I was not that lucky. No. Instead I found the Diapering Board ladies. Like many women's groups organized around duty and biology instead of experience, this group was at first charming, and then, chilling.

The first night I clicked onto the Diapering Board, the ladies were
welcoming and gracious, spending what must've represented several
collective man-hours answering questions about the best cloth-diapering
"system" for my son. They had so many suggestions that I had to devote
a second night to investigating all the different brands and types
they'd recommended. By the second morning, I'd have a decision. Or so
I thought.

But it took a full night just to get the vocab right. The white squares
of my infancy aren't just "diapers," they're prefolds, even though using
them involves folding them again. The best prefolds are DSQs (Diaper
Service Quality) if they have several layers in the middle, and the best
of these are "Chinese Cotton," made in Pakistan and Mexico, of course.
If, however, the diaper resembles nothing so much as a
bath towel, it is an "Australian nappy," not a prefold, and thus
requires more pleats and tucks than an origami crane.

I further discovered that I mustn't refer to a Velcro or snap-closed wrap as a
cover, which pulls up, and I shouldn't confuse a disposable-diaper-styled "fitted" cloth diaper with a contour (the latter are figure-eight shaped flat diapers, and virtually useless). Still, some 16 hours into my investigation, I was no closer to a decision on what to buy.

With a deep sigh, I devoted another sleepless night to surfing for
diaper covers, which come in myriad designs in both high- and low-tech
fabrics. This time, I discovered that, counterintuitively, wool was the
coolest material, fleece was easier to wash than cotton (because of the
treatment that makes it water-resistant) and Gore-Tex was not the
futuristic solution it sounded like.

After another long back and forth on the board, I ordered one each of all the diapers that had caught my eye and settled in to await what the ladies called "doing the Diaper Dance" at the arrival of my first batch of "Fluffy Mail." It was too late to realize that I'd already been indoctrinated. The Clothies had me -- but if you'd asked me, I'd have sworn I could quit at any time.

I was no longer investigating the many modes of diapering to find the most
efficient means of transferring my son's excrement away from his skin. Without noticing it, the inquiry itself had become a hobby. I was
so intrigued, I couldn't stop. As I made my solo voyages from
Snugglebuns.com to sites with other tooth-decay-inducing names,
something compelled me to return to the Diapering Board again and again
to confirm my findings with the group.

Something made me visit eight or nine times a day to see what "kayleesmommy" and "osotired" had to add,
how much vinegar the board's experimenters had determined was optimal
for the first rinse cycle and what biologically correct laundry soap
everyone preferred (Tide Free). Something was driving me, but I had no
idea what it was.

With 20/20 hindsight, it's easy to see that this something was anxiety.
The anxiety that comes with cloth-diaper shopping is hard to explain,
yet nearly every member of the Diapering Board will tell you that she
feels the same. In the effort to calm these nerves, Clothies buy so
many new and different diapers that jokes about creating a diapering
12-step program are as commonplace as are suggestions for hiding
the purchases from outraged husbands.

Rejecting modern convenience
comes only at the price of quixotic second-guessing and reevaluation.
Like puritans fearing that someone somewhere is having fun, Clothies
worry that some advantage of the diapering experience has been lost in
trade-offs (as in, yes, they're nicer on baby's skin, but they're inconvenient; and yes, they're more comfortable, until the second they get wet; and sure, they cost less, but they require more labor; and on and on). This is an anxiety that was notably absent from the Disposable
Families I knew.

The fact that I'd started to divide people into Cloth and Disposable
Families signalled that I needed a break -- not to me, of course, but to
my desperately bored husband. After one particularly long dinnertime
sermon on the environmental advantages of cloth, he begged me to avoid the board for a few days, at least until my first delivery of Fluffy Mail.

When my bun covers arrived, they were awfully cute, but anticlimactic.
These were proto-undies, not a magic system to ward off the storm of
upheaval that my first child's arrival would set off. When I returned
to the Diapering Board, it was to pose the question to my fellow
obsessors of why we did this -- why did we, some of us possessed of
advanced degrees, spend hour after hour talking about shit?

In response, the denizens of the board waxed rhapsodic in its
defense, calling it their favorite place on the Internet, a place they
unironically wrote they "loved," frequented by people (mostly women,
but one man) whom they admired. They'd even liked me until I started
asking so many questions.

When I extolled the virtues of diaper services to a newcomer, that was it. Faster than apple juice runs through a toddler, I was the anti-mommy, accused of terrible sins like using Desitin instead of all-natural Calendula, or leaving baby in a wet disposable diaper for more than 20 minutes.

Weeks later, while researching an article on this niche e-business, an
economics expert told me he'd found it difficult to study diapering
habits. One lady had told him there was nothing more satisfying to her than
the smell of fresh diapers coming out of the dryer -- and how could he
set a price on that? I believed him -- many board ladies said their
favorite day was washing day, when they got to bask in the sight of
their diapers hanging out to dry in the sun.

This washing day thing was key. More than one board member confessed that using a diaper service felt like "cheating." Using commercial wipes instead of the flannel home-washed wipes sold alongside the
diapers in coordinating fabrics was similar fraud. But who exactly would they be cheating? Not their children. Diaper-service diapers are cleaner,
whiter, softer, use 50 percent less water than the home-washed variety and are
treated with a rinse to combat diaper rash. How could a project with so much to recommend it shortchange anyone?

Nostalgia didn't fully explain it. Nor did the "preppy" cotton
aesthetic. The more I thought about it, the more I realized I was
witnessing a cult. For these women (and that one guy), diapering is not just a way to keep one's lap dry. With its fragrant oils and distilled waters, its virgin-white cloths, vestment fancies and gestures of humiliating servitude, cloth diapering is nothing short of a rite of purification in the worship of
their children. Hail Jesus, Mary and ... Justin?

When at last my son was born, all was forgiven. Not only did I see how
tempting it could be to devote my life to singing my pint-size Lord's
praises, but I exulted in the visible relief he enjoyed as the pink irritation disappeared from between his tiny cheeks whenever they were
swaddled in cloth. I just wasn't going to be a martyr to the cloth.

Months later, I still haven't settled on just the right diaper/cover
system -- but as long as I stay off the board, I don't care. Sometimes I
miss the board -- after all, no one else around here understood my grief
when my boy outgrew my favorite cover -- but out here in the real world I
can use a disposable without feeling apostate. Sometimes absorbency
trumps comfort, like when Mommy wears dry-clean-only pants.