Two new anti-flu drugs just hit the market and will be backed by millions in advertising. But do they work? 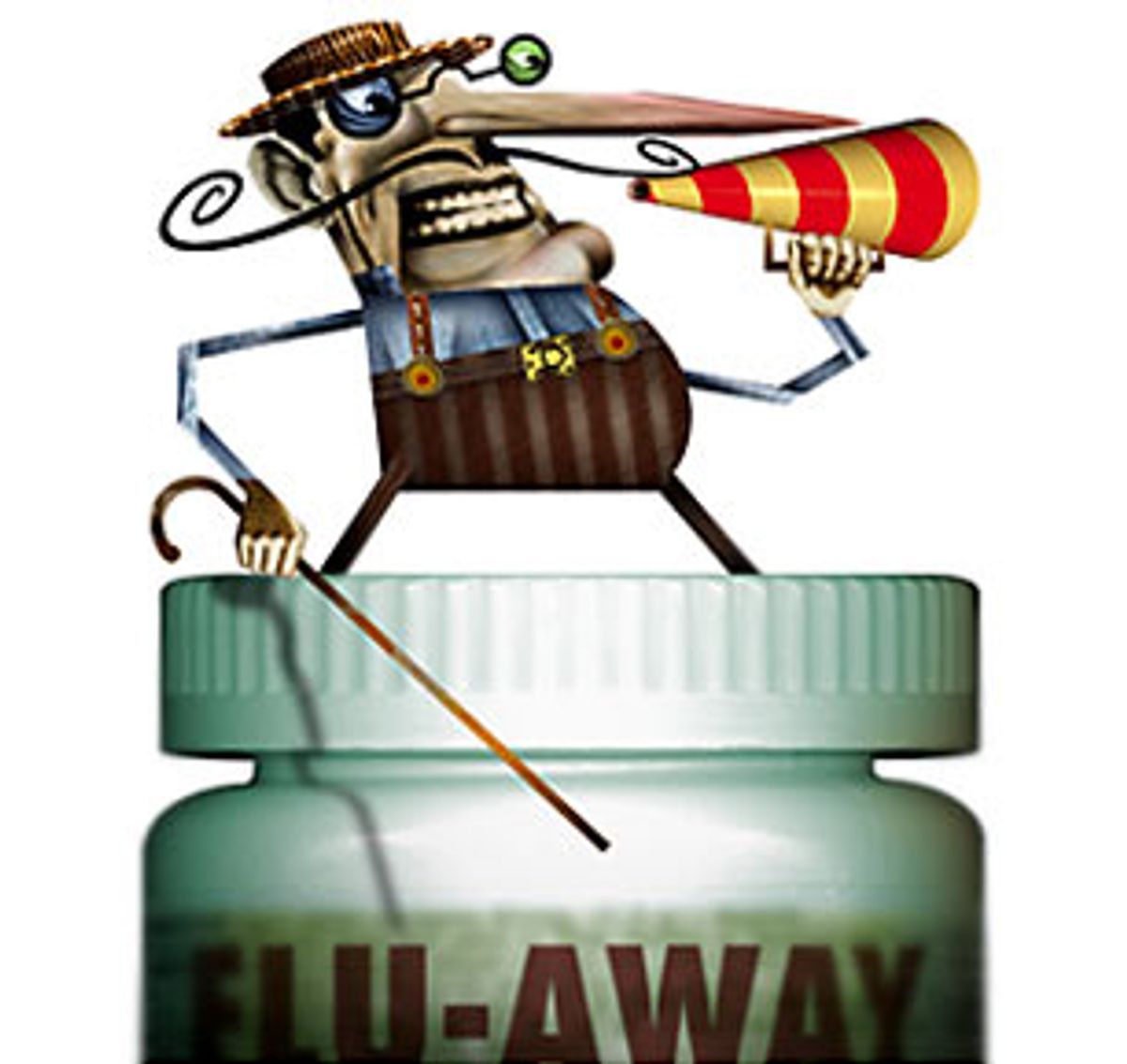 It's easy to recognize the familiar signs and sensations of flu season -- the hacking cough, the jackhammer headache, the mind-melting fever and the empty office cubicles. But this year there's a new seasonal symptom -- advertising.

Two pharmaceutical giants, Glaxo Wellcome and Roche, are launching massive campaigns to get Americans to shell out millions for new anti-flu remedies. But some of the scientists who have examined the drugs are skeptical they will do much more than fatten drug industry profits.

Each year from November to April, the influenza virus sickens up to 50 million Americans. As common infectious diseases go, it's a bad one. Healthy adults need about a week to emerge from the flu's boggy grip, and it kills about 20,000 sickly and elderly Americans each winter. Flu is also an enemy of the state in that it undercuts our efficiency -- costing $5 billion in lost work and hospital bills each season, according to the CDC.

Influenza's evolutionary strategy makes it easy to anthropomorphize as a Bill Gates among bugs -- brilliant, devious and sinister. There are dozens of varieties of flu and they mutate faster than Dennis Rodman's hair. Now and again, the molecular roulette wheel brings forth a pandemic strain unrecognizable to human immune systems; the worst of these was the 1918 virus that killed half a million Americans and 20 million souls worldwide.

Flu shots can be more or less effective protection, depending on whether the scientists who prepare the year's batch of vaccine correctly predict which strains will predominate in the population. The Clinton administration has advocated inoculation religiously, and this year 90 million Americans are expected to bare arms for the shot -- compared with 20 million a year ago.

But until now, once you got the flu the only recourse was to stay in bed with a wet washcloth and a cheesy novel nearby. This year, what passes for a cure has found its way to the market.

The new medications, Glaxo Wellcome's Relenza and Roche's Tamiflu, are the first in a class of drugs called neurominidase inhibitors. They work by neutralizing proteins on the viral surface that help the bug emerge from lung cells to replicate. If you haven't heard of Relenza and Tamiflu, $50 million says you will soon -- the two companies are estimated to be spending that amount to promote their drugs.

Obviously $50 million buys a lot of hype, and depending on how you look
at it, hype may be the biggest ingredient in these drugs, which cost about $50 each for a five-day therapeutic course.

Glaxo's TV ads, produced by Saatchi and Saatchi, started airing last week. They star fat, obnoxious Wayne Knight (Newman from "Seinfeld") as the flu -- an unwanted guest who arrives at your house by bus.

The ad is intended to produce a vaguely uneasy feeling and send you reaching for the phone to get your doctor to write out a prophylactic prescription. But examining Relenza's trek through the regulatory system produces an equally queasy feeling, akin to seeing an important public figure unclothed -- an emperor, say, or perhaps Wayne Knight himself.

Consider this: The British and French medical establishments have
already rejected Relenza as an essentially worthless drug. Despite much gnashing of the teeth by Glaxo Wellcome executives, who accused the British government of trying to destroy the country's pharmaceutical industry, Britain's National Institute of Clinical Excellence voted last month against including Relenza on the National Health Service's formulary.

In February, an expert panel asked by the FDA to offer a verdict on whether it should approve Relenza came to essentially the same decision as the French and British doctors.
"I wasn't convinced by the data," says Edwin D. Kilbourne, a renowned New York virologist who served on the advisory committee, which voted 13-4 against Relenza.

Glaxo Wellcome had presented the panel with data from three trials involving a total of 1,609 patients in Europe, Australia and North America. By Glaxo Wellcome's analysis, the drug shaved up to two and a half days off a seven-day flu if the medication were taken within two days of the appearance of flu symptoms.

But there were some major catches. In the North American study, by far the largest, Relenza reduced the average duration of a flu case by only a day. When the FDA's statistician got through with the data, it looked more like half a day. And Kilbourne -- a scientist who is enthusiastic about the eventual deployment of an anti-neurominidase drug -- found even that misleading.

"In terms of the acute symptoms -- incapacitation and fever -- flu
is a three- to four-day disease," he says. "So to say this drug reduces a seven-day illness to a six-day illness, when the symptoms at the end are rather trivial, is to make somewhat unfair claims of efficacy."

Furthermore, how many people could be expected to get to a doctor,
get proper diagnosis of flu, and get the drug within the relevant 48 hours after the first symptoms? "Depressingly few," says Alan Sanders, an infectious disease specialist in Albany, N.Y.

Much to the astonishment of Kilbourne and other scientists, the FDA in July decided to ignore its panel's advice and approve the drug anyway. The July 26 approval memorandum from Heidi M. Jolson, director of the FDA's division of antiviral drug products, makes it clear she wasn't particularly impressed by Relenza. Glaxo's U.S./Canada study "was inconclusive in providing definitive evidence of efficacy," she writes.

Despite this, FDA officials seem to have given the thumbs up to Relenza and
Tamiflu -- which is even newer and more untested than Relenza -- for
another public health reason: The next time there's a flu pandemic, we need to have tested drugs available. And the only way to test these particular drugs is to give them a wider public outing than the clinical trials permitted.

Relenza, writes Jolson, "will offer an alternative therapeutic approach for an important public health problem." Adds CDC flu honcho Nancy Cox, in an Oct. 28 editorial in the New England Journal of Medicine, "Patients, clinicians and the public health community alike will be fortunate to have these new drugs. Now we must determine how they may best be used."

"I suppose the FDA felt there were so few drugs available that any drug was better than nothing," comments Kilbourne. "I don't think that's an adequate answer."

One issue the advisory panel agreed upon, which surely played a role in the FDA's decision, was the good safety profile of Relenza. (Although Relenza did appear to temporarily reduce the lung function of some asthmatics who used it, the company has put a warning label on its product, a dry powder inhaled via a spaceship-shaped device.)
The FDA could more easily make guinea pigs of the public knowing that the drug was harmless -- even if it was also worthless.

That said, early tests have shown that Tamiflu, which comes in a pill, produced vomiting twice as often as the placebo.

Still, the drugs will certainly work for some people. The most encouraging
use, though not the one listed on the drugs' labels, is as prophylaxis for
family members of a flu patient. And the new medications may have the side benefit of lowering antibiotic use, which always increases in flu season and which contributes to the harrowing threat of antibiotic resistance.

"By treating people with something that makes them feel better a day or two earlier we'll be prescribing fewer antibiotics," predicts Sanders, the infectious disease specialist. "People want to leave the doctor's office with something and in this country that something is usually antibiotics. Now the doctors have something in their armamentarium specifically for flu."

And what about the problem of viral resistance? No one seems particularly worried about it -- yet. The flu virus is constantly evolving anyway, and there's no indication the neuraminidase inhibitors will promote the kind of radical genetic shift that would produce a pandemic virus.

"I don't see a problem of resistance with Relenza," says Kilbourne with a chuckle. "Most of the viruses are apparently fit enough to resist it already."

The next pandemic is what really worries flu scientists. They know it's coming; they don't know when, or from where.

In 1976, in an episode recounted in New York Times reporter Gina Kolata's new book, "Flu," a healthy soldier's death at Fort Dix, N.J., sent government officials into the panicked conviction they had a pandemic on their hands -- from a flu virus that originated in pigs.

They began a massive vaccination campaign for a swine flu epidemic that
never came. It ended up also costing the government billions of dollars in payments to people who believed the shots gave them a crippling autoimmune disorder called Guillain-Barré syndrome.

Let's hope the FDA's apparently hasty approval of Relenza doesn't have
such a sad ending.