With lead roles in three new films, Philip Seymour Hoffman, one of the great character actors of the '90s, is about to hit the big time. Are we sure we want him to? 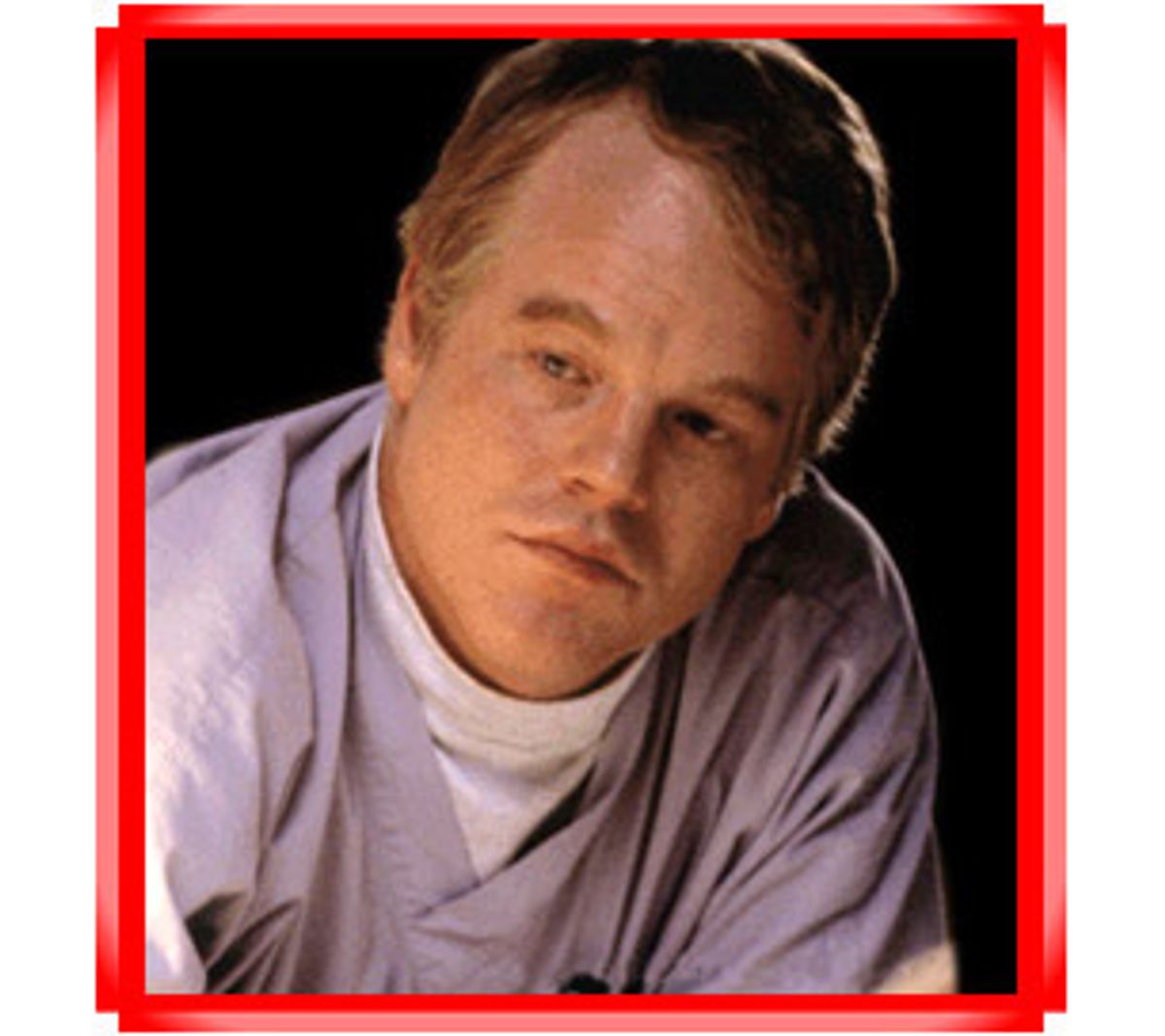 Philip Seymour Hoffman first made me nauseous an hour into "Boogie Nights." The scene: Hoffman, as the chubby, redheaded porn P.A. Scotty, shows off his new hot rod to his hero, Dirk Diggler (Mark Wahlberg). Dirk is grooving on the car in his charmingly empty-headed fashion
when Scotty can contain himself no longer. He spills all over Dirk in a grabby, groping kiss.
"Can I kiss you on the mouth?" he begs. Dirk resists, but comforts his friend: "Let's go back to the party,
man." Rejected, Scotty slumps into the driver's seat of the car, his mouth squared, sobbing "I'm a fucking idiot."

It might not have been much different from any other unrequited love scene, but something about
the way Hoffman's red pleather jacket stretched taut over his gut utterly undid me. Though Hoffman had appeared
in a dozen films before "Boogie Nights," this was the moment he first sprang from the screen and
lodged in my mind. He's been creeping me out ever since.

There's a "Seinfeld" episode where George resolves to become the "bad boy," and Jerry counters, "Why not? You've
been the bad friend, the bad son, the bad employee ..." So it is with Hoffman: He's been the creepy neighbor ("Happiness"), the creepy ex-boyfriend ("Next Stop, Wonderland"), the creepy assistant
("The Big Lebowski"), the creepy preppy ("Patch Adams"), even the creepy meteorologist ("Twister"). After "Boogie Nights," I began noticing him everywhere. His appearances evoked a peculiar thrill particular to movie-going, the almost physical rush you experience when you recognize
a character actor: "Right! He was the guy in 'Scent of a Woman!'" Everyone loves to be an insider.

After that, I found myself counting the minutes he was on-screen. His presence was bracing, in the manner of a pine tree, or a pile of garbage. Like any really fine character actor, Hoffman gives off a strong whiff of reality. Hollywood's idea of a loser is Ethan Hawke with chin whiskers.
But Hoffman's not a rebel loser, he's a loser loser, the guy at the next table who keeps trying to tell you
about his operation. In "Next Stop, Wonderland" (on-screen: 4 minutes), he was every pinko I ever mercy-dated who then turned around and told me how middle-class white girls like me were ruining the planet.

A clutch of new movies threatens to smooth his edges. Hoffman makes the leap from below the title to
above in three big films this holiday season: as the drag queen next-door to Robert DeNiro in Joel
Schumacher's "Flawless"; as the expat Freddie in "The Talented Mr. Ripley," the latest effort from
"English Patient" taste-monger Anthony Minghella; and as the male nurse, Phil, in "Magnolia," a new film from "Boogie Nights" director Paul Thomas Anderson. Next year, he'll schlump his way into the romantic lead in David Mamet's "State and Main." Will Hoffman's acidic realism be denatured into something more palatable?

I've got a funny feeling I'm about to be cheated, like every kid whose favorite top-secret alternative
band gets snapped up by a major label. All of a sudden you're no longer an insider. You're one of many.

I want to kiss my movie stars, kiss them so hard I meld with them and become them. That's why they exist. Its also why Hoffman is so vexing: He's a riveting star, but for God's sake keep those lips off me. And I don't
think I'm alone here. If any other up-and-coming actor had three major films coming out in a single season,
he'd be Gretchen Mol-ing all over the cover of Vanity Fair. But it's impossible to imagine a fawning Bob
Colacello feature on Hoffman driving around L.A. darkly smoking cigars, or an InStyle spread on Hoffman's velvet
sofa'd Greenwich Village bachelor pad. What would Hoffman coyly divulge? How he uses Crisco to paste his
bangs across his forehead? Where he buys his sixers of Pabst? Hoffman isn't someone we want to be. He's
someone we want to be better than.

Here is an actor whose entire oeuvre can be described in one sentence: "At least I'm not that guy."
So you can't get a date; at least you're not making obscene phone calls like Hoffman in "Happiness." So you lost
your girlfriend; at least you're not a commie haranguer like Hoffman in "Next Stop, Wonderland." Even as
Brandt, the hilariously supercilious assistant ("Hello, Dude") in "The Big Lebowski," Hoffman is unenviable.
Brandt wields power, but it's power that belongs to his boss. He's a butt boy.

And I do mean butt. Hoffman fulfills the role of loser from the bottom up: He is fat. Not in a powerful,
Marlon Brando, Meat Loaf, intimidating juggernaut kind of way. Fat in a way that says, I'll never be able to climb that rope. Fat like the fat kid on the playground everyone tormented and pitied. His characters even have fat-kid names: Scotty, Dusty, Rusty. So you're flunking math and you've
got a zit so big people mistake it for a second nose? At least you're not that guy.

Fellow chubby actor Mike Myers always finds a way to appear in his underpants in his
films; it's funny and a little sweet to watch him dancing around unabashedly in his tighty-whities
singing "Happy Birthday, Mr. President" in "Wayne's World." If Hoffman were to do that same
song-and-dance, you wouldn't be laughing, my friend. You'd be scared.

But Hoffman can be cute -- I've seen him do it. (His character in "Twister" had a certain hempy
Deadhead appeal.) But he seems to prefer walking straight into the pain. He doesn't seek relief in the
niceties of adulthood. This is the real stuff: kid pain. His also-rans cower with a child's self-protectiveness.
Toward the end of "Happiness," when he finally goes to bed with Camryn Mannheim, he curls up on top of her
pink coverlet, his babyish rump poking into the air. In "Boogie Nights," Hoffman as Scotty watches in horror as
Dirk attacks an up-and-coming rival. There he is in the back of the frame, mouth a rectangle, one arm held straight
against his side by the other arm -- just like a kid watching his parents fight.

The horror of being a kid is that there's no way out, and Hoffman perfectly conveys a child's fatalism. In
"Boogie Nights," he's the fatso in a sea of perfect bodies. But he never works at self-improvement; he
happily lets that tiny tank top ride over his tummy pudding. The thought that he could be like the others
never enters his mind. He just wants to be near them. Even his joy is a kid's whooping Batman-and-Robin
joy. In "Twister," he drapes his sweatshirt from the top of his head like a kid's pretend cape and screams himself hoarse.

Hoffman's genius rests in his ability to locate the aggression at the core of his characters; he's always aware of the particular threat he poses. It was in the dunderheaded "Twister" that I first noticed the knife-twisting malice to his act. As Dusty, Hoffman decides spook the film's baddie (Cary Elwes), and there's only one way to do it: He thrusts himself into the cab of Elwes' truck and barks "Give me a
kiss!" Elwes speeds off along the country road like he's being pursued by a ghost.

The word "transgressive" gets bandied about a lot these days, often in reference
to art that 20-year-olds consider revolutionary and the rest of us consider poorly lit. But Hoffman uses his
body in a genuinely transgressive way -- he spills over boundaries. (In "Happiness," he spills quite
literally: That ain't no kindergarten paste he's smearing on the wall.) His sloppy-dog kisses, his tummy, his
blood-engorged face all conspire to unnerve us. It's not just that he reminds us of our own weakness. It's
that he reminds us of the soul scarring that happens to both parties when we kick the weak. He's playing a
punk rock version of the Janis Ian mopefest "At Seventeen."

Most film villains are razor-sharp toughies, sociopaths who just don't care. In Hoffman's case, though, it's his characters' needs, their all-too-human vulnerability, that makes them so dangerous. In "Happiness," Hoffman's gut hanging out over his pants spell trouble the same way Robert Mitchum's glittering eyes spell trouble in "Cape Fear." But Hoffman doesn't just cut you -- it's more like he slowly stabs you to death with a dull knife.

I suppose the general movie-going public's threshold for such suffering is pretty low. Will Hoffman have to adjust his persona accordingly? Will Anthony Minghella render him all amber and arty? Will Joel Schumacher perform the mysterious personality-reduction operation he seems to inflict on all actors?

I can only hope Hoffman retains his essential unkissability. In "Patch Adams," he has the distinction of playing the only character with a lick of sense of in the whole film. When red-nose-wearing Robin Williams (known around our house as "that fucking Rudolph") accuses Hoffman of being a prick, Hoffman responds, "Maybe I am. But you ask the average person when death comes knocking at their door
whether they want a prick on their side or some kindergarten teacher who's gonna kiss their ass. When that
day comes, I want the prick." Me, too. I want the prick. I want my Hoffman.

Claire Dederer is a freelance writer in Seattle. Her work also appears in Slate, the Village Voice and the Seattle Weekly.