"Ride With the Devil"

Ang Lee's dark and sober fable might be the most interesting and least dogmatic view of the Civil War to wend its way into the multiplexes. 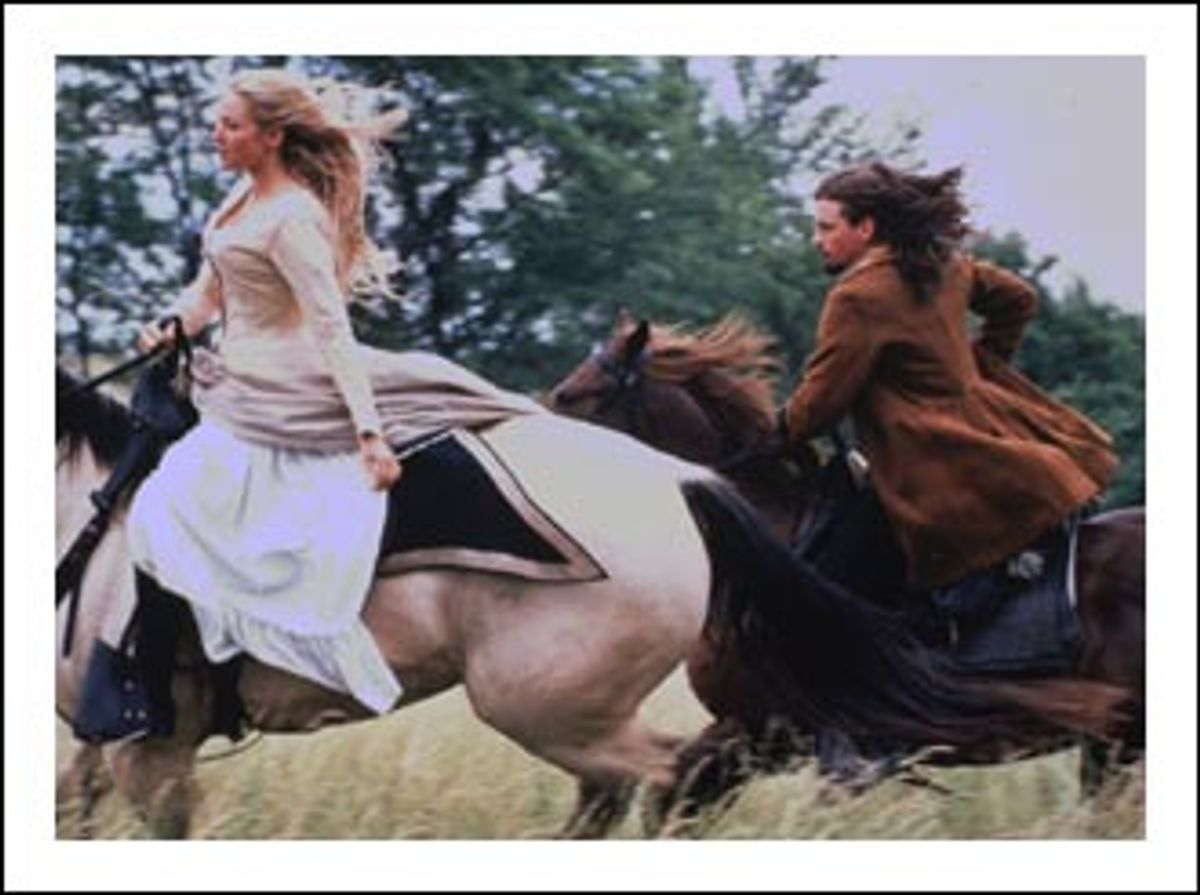 "Ride With the Devil" sometimes seems as awkward, loose-limbed and gangly as the young men -- boys, really -- whose careers as irregular Confederate soldiers it follows. But for all its clumsy dialogue and loose plotting, this is historical filmmaking of a high order, both visually and thematically ambitious. Although it's laden with youthful star power, "Ride With the Devil" is no exuberant joyride. Rather, it's a dark and sober fable of lost innocence, demonstrating how easily juvenile enthusiasm can be perverted or destroyed.

Maybe this view of war isn't revolutionary, but it's presented with severe elegance by Taiwan-born director Ang Lee, who brings his dispassionate but sympathetic outsider's eye to another peculiar corner of American society. (His previous film was "The Ice Storm.") Even if this isn't the best Civil War film ever made, it's one of the most interesting and least dogmatic, perhaps because Lee has no vested interest in the internecine conflict that continues to echo through our culture almost 140 years later.

At first, the story of Jake Roedel (Tobey Maguire) and Jack Bull Chiles (Skeet Ulrich), best friends in 1860 rural Missouri who join a gang of pro-Southern marauders known as "bushwhackers," seems an awfully long way from the 1970s Long Island anomie of "The Ice Storm." But there are threads that connect the two pictures: Both are studies of human beings in harsh weather, certainly a common issue in most of North America, and both find a sere and memorable beauty in landscapes not conventionally considered lovely.

In fact, Lee and cinematographer Frederick Elmes (whose impressive risumi includes "Blue Velvet" and "Wild at Heart" as well as "The Ice Storm") shot "Ride With the Devil" in an impressive wide-screen format; see it at the biggest megaplex you can find. (It was mostly filmed on location in the hill country along the Kansas-Missouri border, where much of the terrain looks no different than it did a century ago.)

Furthermore, both "The Ice Storm" and "Ride With the Devil" examine American society at moments of epoch-making turmoil. In the press notes to this film, Lee writes that he sees the Civil War as the point when the values of Yankee Protestant capitalism -- in particular, the notion of society as a group of free and equal individuals in economic competition -- began its inexorable triumph over tradition-bound, communitarian cultures from Missouri to China.

If the Northern victory was both necessary and inevitable in historical terms, its long-term global legacy is considerably more ambiguous. Lee and screenwriter James Schamus (who adapted Daniel Woodrell's novel "Woe to Live On") are certainly not endorsing the Confederate cause by focusing on the bushwhackers. Part of the point of "Ride With the Devil," in fact, is that the dirty war in Kansas and Missouri was something like an ugly neighborhood feud, where men fought for their friends, families and hometowns rather than over some abstract concept of nationhood.

In fact, by any logical assessment, Jake, the son of a German immigrant who passionately supports Lincoln and the Union, doesn't belong on the Southern side at all. But after his best friend, dashing babe-magnet Jack Bull, sees his father killed and his house burned by pro-Northern Kansas raiders known as "Jayhawkers," Jake never questions his loyalties.

Maguire's introverted, half-mumbled acting style, employed with such emotional power in both "The Ice Storm" and "Pleasantville," might seem an odd choice for a 19th century character. But Jake is a perennial outsider, a merchant's son trying to conform to the ideals of Southern masculinity, and Maguire's halting, self-conscious manner suits him perfectly. Ulrich, on the other hand, was surely born to play a member of the decaying rural aristocracy. With his elegant sweep of hair, glittering eyes and supercilious bearing, he makes Jack Bull into a commanding, pseudo-noble figure, almost eager to throw away his life in misguided heroism.

"Ride With the Devil" gets off to a fumbling start, with lots of labored picnic chitchat about the impending war and "that black Republican Abe Lincoln." Perhaps the epitome of unlikely exposition is reached when someone says, "Lawrence, Kan., and its abolitionists are a long way from here," as if it were something others in the conversation didn't know. But after Jake and Jack Bull take to horse and join the band of daredevil bushwhackers led by Black John (James Caviezel), the leisurely pace and florid period dialogue begin to pay dividends.

As one of the few slave states to remain in the Union, Missouri was torn apart by bloody, small-scale guerrilla warfare -- Woodrell has said his novel was partly inspired by present-day events in the Balkans. Lee's skirmish scenes, although undeniably exciting, emphasize the random brutality of the carnage as small bands of bushwhackers and Jayhawkers shoot it out at close range from farmhouse to farmhouse.

Schamus' dialogue is a little off-putting at first -- it presumes that 19th century Americans actually talked in the stilted, piss-elegant phrases they used to write letters. So we have Jake, after losing a finger in a shootout, announcing, "It makes me notable by the loss," and a fellow bushwhacker calling out, "We shall to the Evans farm, boys!" or telling a visiting widow, "I believe we can essay some hospitality." I can't judge the veracity of this device, but like the rest of the movie it finally becomes convincing; the details in "Ride With the Devil" are so carefully managed you feel as if you can taste the wood smoke and smell the unwashed boots.

Black John's band also includes the blond rake George Clyde (Australian actor Simon Baker) and his constant companion, Daniel Holt (Jeffrey Wright), a freed slave who feels he owes Clyde his life for liberating him. So Lee not only focuses on the little-known Kansas-Missouri front of the war, but on the undisputed if historically uncomfortable fact that some black men fought for the Confederacy, against their own evident best interests.

Convincing a contemporary audience that a black character feels a debt of honor to the slave-owners' regime might seem an impossible task. Wright, an extraordinarily talented actor who played the title role in "Basquiat" and the drag queen Belize in "Angels in America" on Broadway, pretty nearly pulls it off.

As the film progresses and the war in the Missouri Valley descends into anarchy, the focus gradually shifts to the three outsiders attached to the bushwhacker cause: Jake, Holt and the farm widow Sue Lee (Jewel). In her feature-film debut, Jewel turns out to be a robust performer with an easy, unforced manner; there's no hint of pop-star glibness to her acting. When the bushwhackers hole up on her farm for the winter, she and Jack Bull strike up a plausible romance with implausible speed. After the fighting resumes and fate interrupts Jack Bull and Sue Lee's idyll, the single woman, the former slave and the German have no one to turn to except each other.

There is tenderness, humor and even some optimism in Lee and Schamus' lengthy (perhaps too lengthy) denouement, as this trio strives to heal their emotional and physical wounds, but almost no sentimentality. Jake and Holt, after all, have participated in the Lawrence massacre, an infamous bushwhacker raid into Kansas during which 180 civilians were slaughtered. Both have also acquired a nemesis in fellow bushwhacker Pitt Mackeson (Jonathan Rhys Meyers), an almost spectral figure of swishy, early-Jagger bigotry and hatred. As Mackeson's chilling final encounter with Jake, Holt and Sue Lee suggests, neither the war's survivors nor their nation will ever be the same.