"The Unburied" by Charles Palliser

Half Victorian mystery, half contemporary psychological thriller, this is a tale of murders in several centuries. 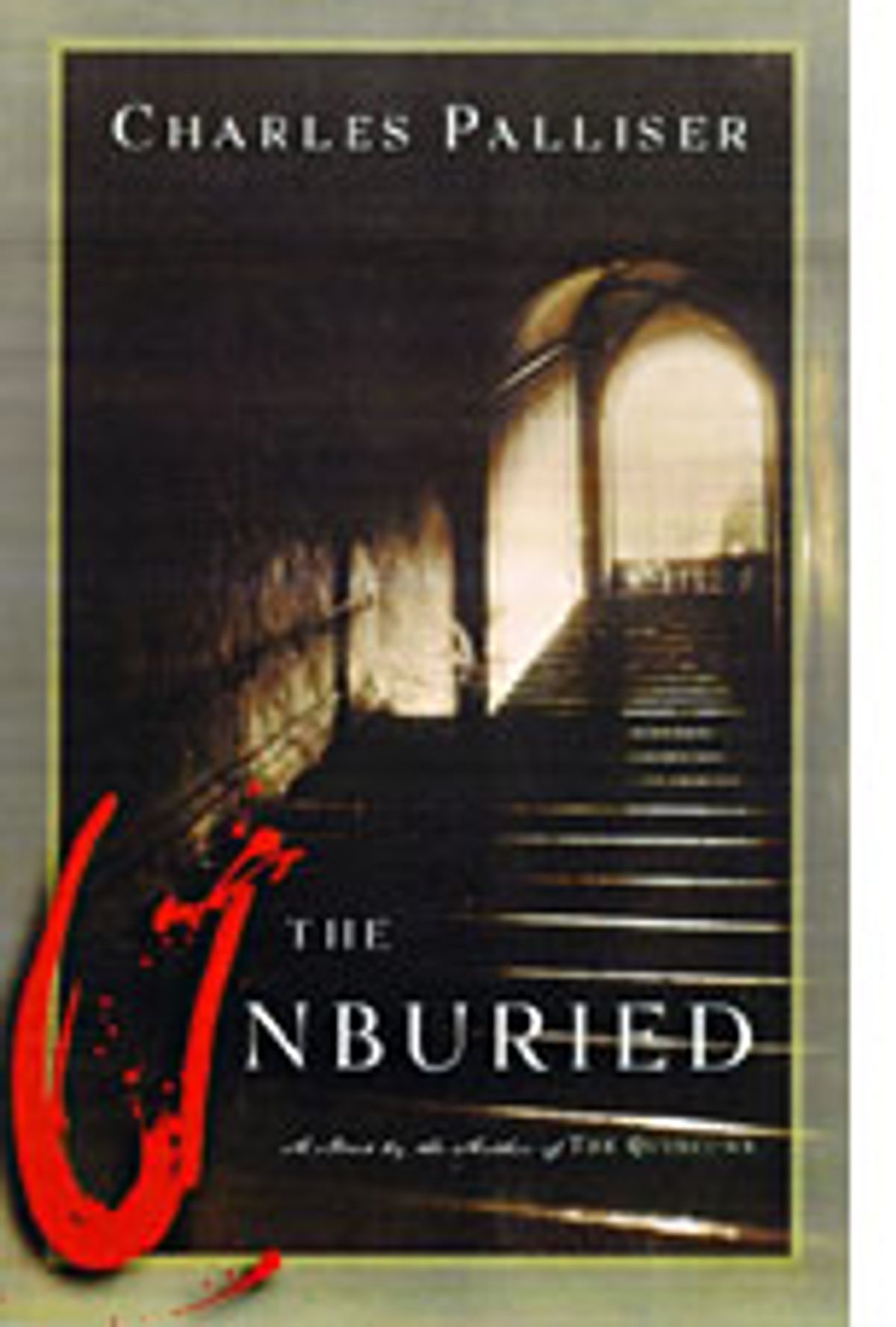 By now the stakes for murder mysteries have risen almost impossibly high. At the end of the century of the banality of evil, it takes more than a murder to make us shiver: It takes orgies, bloodbaths, refinements of sadism of the sort that Thomas Harris supplies. The quality that made Wilkie Collins' suspense novels so absorbing -- the claustrophobic feeling that a single crime poisons the universe -- is virtually impossible to achieve in an era in which we know from the newspaper that worse things happen in our own city a dozen times a day. And so it makes sense that Charles Palliser has set his new murder mystery, "The Unburied," in the late 19th century. That's the only way he could regain some of Collins' Gothic power.

Palliser is unashamedly Victorian (his very name is out of Trollope) in hauling in haunted churches, menacing fogs, gas-lit streets, ancient ghosts. But he is also contemporary: His hero triumphs not just by solving the murder but also by resolving his own psychological problems. Edward Courtine, whose "found" manuscript makes up the bulk of the novel, is a middle-aged university historian specializing in Alfred the Great. He is also a husband emotionally ruined, even 20 years on, by his wife's having abandoned him for another man.

As the novel begins, Courtine is coming to the cathedral town of Thurchester to see Austin Fickling, an old friend who played a part in the jilting, hoping to rebuild their friendship. But as one might expect of a man who lives in a rickety house in the shadow of an ancient cathedral, Fickling is acting odd: toting strange parcels, screaming in his sleep, slipping out in the dead of night. To say that a murder ensues isn't giving anything away; in a town like Thurchester, it's practically de rigueur.

Indeed, the town has seen this kind of thing before. In the most innovative feature of "The Unburied," Courtine's historical inquiries lead him to three earlier murders, which Palliser weaves into the main story: one involving King Alfred, one from the English Civil War period and a third -- the most important for the plot -- from the early 17th century, involving two deaths in the cathedral. The parallel between the historian's work and the detective's is clear as Courtine tries to solve the 17th century and 19th century crimes simultaneously, while the reader has to keep an abundance of names, clues and motives straight.

It's this plurality of crimes that keeps "The Unburied" from being a perfect suspense novel -- that, and the somewhat watery psychologizing that creeps in toward the end. Reading Courtine's "manuscript," we are naturally the most curious about the murder he himself is drawn into. But it doesn't transpire until two-thirds of the way through, and we don't find out the solution until the "editor's" postscript at the very end.

Instead we get a great deal of trumped-up medieval and 17th century history and philology, which simply aren't as satisfying. Every suspense novel shares the problem that the solution, when it's revealed, is almost inevitably unconvincing; hardly any crime can be wicked enough to justify the creepy atmosphere that the writer has built up around it. But Palliser's solution is even more unsatisfying than usual: It requires the intervention of several previously unknown characters and seems stuffed in almost as an afterthought.

Moreover, when the focus shifts to Courtine's own marital and emotional problems, we are transported to a psychologist's couch in 1999 and lose the Victorian flavor entirely. One character instructs Courtine that "it's only when the burial is over that the process of grieving can begin." Thus the multiple meanings of the title: The unburied is both the murdered man whose ghost cries out for justice and the traumatized man who needs to lay his "issues" to rest. But since Courtine -- appropriately for the narrator of a thriller -- is not a fully developed character (he is really an observer, a surrogate for the reader), it's hard to care much about his emotional needs. By asking us to care nevertheless, Palliser clouds the novel and distracts us from the (entertaining and absorbing) main business: the murder and its solution. Which is another way of saying that the old 19th century formula has life in it yet.