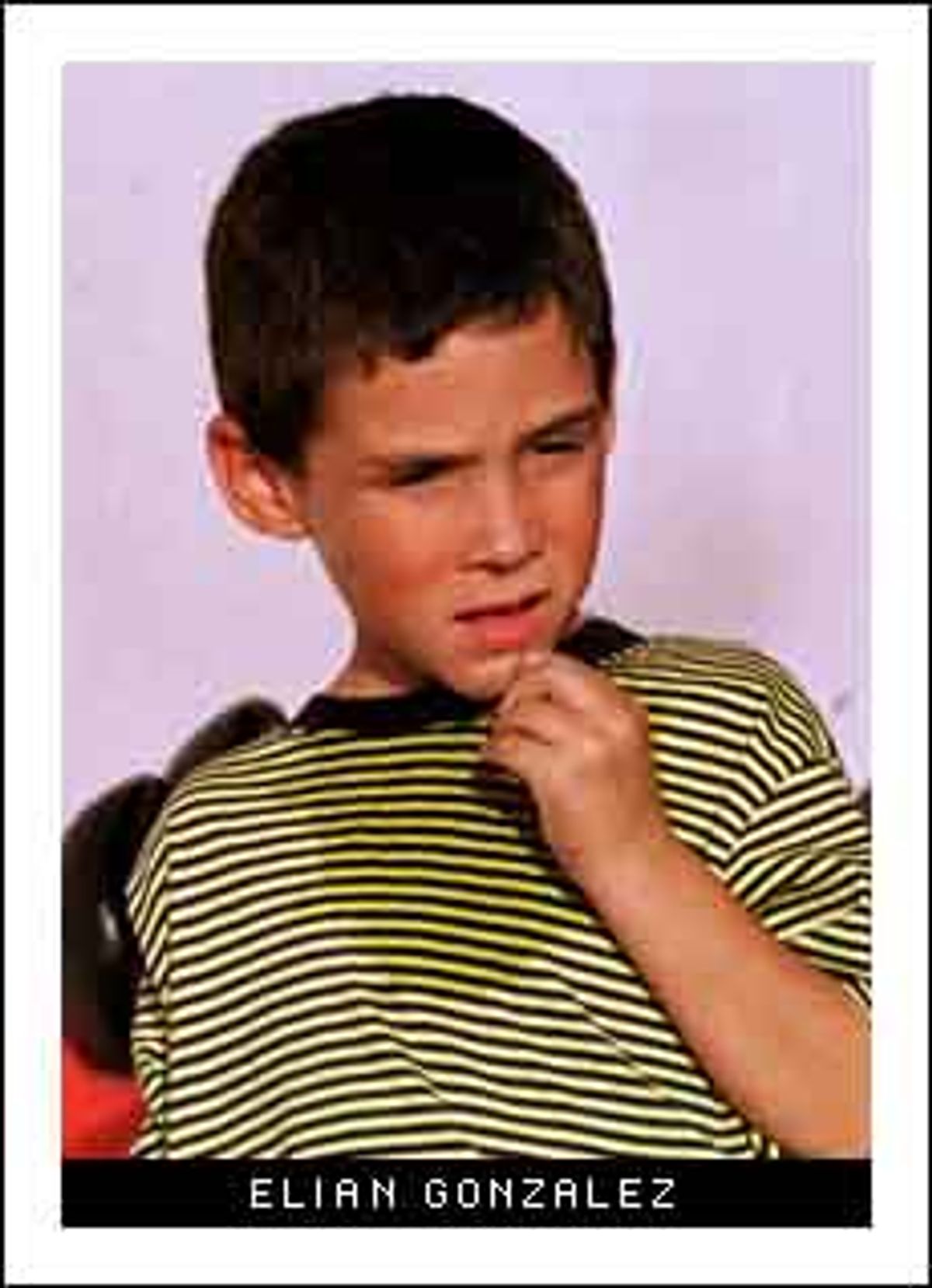 Five-year-old Elian Gonzalez is shown at his new home in Miami, Tuesday, Nov. 30, 1999. Gonzalez fled Cuba with his mother and stepfather in a small powerboat that sank during the 90-mile crossing to Florida. Nine people died, including his mother and stepfather. Elian was found alone Thanksgiving Day, clinging to inner tubes off the Florida coast near Fort Lauderdale. Days after he was rescued off the coast of Florida, Elian is starting to ask questions about his future, now caught in a political tug-of-war between Cuba and the United States. (AP Photo/Alan Diaz) (Associated Press)
--

Adults seldom sound as certain and foolish as when they offer opinions about children they do not know.

So it is in the sad and twisted drama unfolding over the fate of a 5-year-old Cuban boy named Elian Gonzalez, caught in the middle of a custody dispute between his father, who lives in Cuba, and a circle of relatives and newfound friends in Miami. Everyone involved is certain they know what it best for him.

Elian was rescued off the coast of South Florida on Thanksgiving Day. He had somehow survived for two days drifting in an inner tube in the Atlantic Ocean after the motorboat that carried him, his mother, his stepfather and 10 other people capsized on the journey from Cuba.

In the week since his arrival Elian has been showered with gifts and affection. He has also become a pawn in the interminable battle between the Cuban government and those in the United States who long to see the end of Fidel Castro.

The child, like the two other survivors, is eligible for political asylum in the United States. Elian's lawyer, Spencer Eig, has announced that he wants the child to remain here, presumably to be reared by the relatives with whom he has been staying in Miami. Elian's cause -- or rather the cause as defined by his lawyer -- has been taken up by Cuban American National Foundation, which has turned him -- literally -- into a poster child for the anti-Castro movement; the group has already printed 4,000 posters with a picture of Elian and a caption reading "Another Child Victim of Fidel Castro."

Elian's father, however, wants him back. Juan Miguel Gonzalez says that Elian's mother, from whom he was divorced, "kidnapped" the child. He fears that all the gifts heaped upon his son have somehow "brainwashed" him. Not surprisingly, he has been joined by the Cuban government, which has petitioned American representatives in Havana for the child's return. Eig, Elian's relatives and their supporters insist they will not let him go.

Elian, his relatives say, is happy. They do not doubt that his father -- a doorman at a tourist hotel, who is from their side of the family -- loves him. But, as one of them put it, "the only thing he could offer him would be love. We would offer him the same, as well [as] a future, a better lifestyle, an education."

Clearly, the involvement of two unfriendly governments, as well as a powerful lobbying group, has twisted the case so that what should be a question of the best interests of this child has been transformed to a debate about immigration policy and Castro's Cuba.

Freed from this geopolitical twist, the fracas is relatively, sadly, uncomplicated. Juan Miguel Gonzalez and his son are caught in the middle of a drama that is played out with numbing familiarity when parents seek to reclaim children who become the wards of the state.

Were Elian an American child who lost his mother and stepfather in, say, a bus accident on the road between Pensacola and Tallahassee, he likely would have been returned to his father without hesitation.

That is because, in the United States, the law sides with biological parents when others (be they foster parents, grandparents or other "psychological parents") seek custody of their children. Biological bonds trump all others, except when a parent has, in the eyes of the law, failed a child. Then things get messy.

And parents do fail their children, sometimes in horrific ways. Over the years, I have sat in various family courts and watched as parents whose children have been taken by the state try to get their children back. It is a demeaning spectacle. And while I in no way condone the behavior of parents who abandon, abuse and neglect their children, I have been struck time and again by the naivete and foolishness of the state's challenge to them: Prove you are worthy of your child, and if you can't, you will lose him forever.

Child welfare has always been about social engineering. The state attempts to make sure that the children of parents it disapproves of do not become people like their parents. Not that child welfare officials would ever admit to it. Nor would they admit to the enduring and crippling flaw in the way they see their mission, believing that the state can and must "save" a child from a parent, that it can take a child from a failed parent, place that child in a new home with substitute parents and thereby create a new life in which the past is made to disappear.

So what has all this to do with Elian Gonzalez? Everything. Elian's supporters in the United States have subjected us to a debate that has nothing at all to do with the child and everything to do with the needs and wishes of the adults around him. That should not be surprising. Questions about the fates of children have always become questions about the competing claims of adults, the official idea of "best interests of the child" notwithstanding.

Suddenly, a host of people who two weeks ago had never set eyes upon this child, let alone spent any meaningful time with him (none have thus far claimed any relationship other than kinship), now sound very certain about what is best for him: They are best for him.

I do not doubt their capacity to love the child, nor their willingness to lavish him with all they can afford. But I have yet to read of one adult who has become a part of Elian's life saying, "Perhaps we need to consider who this child is, and what he needs." Who does he want to kiss his hurts and tuck him in at night? Who does Elian see as the surviving adult in the center of his life?

Here is a child who has just lost his mother. He may well have witnessed her death; at the very least he was close by when she went under. He also lost his stepfather, who saved his life by wedging him into the inner tube that kept him afloat. Yet somehow we are told that he is happy. Happy? Are these friends and relatives mad or just naive?

Like every child who comes to the attention of the state, this is a child with a past. And this child's past, the little we know of it, rests with a doorman in a tourist hotel in the Cuban town of Varadero. And unless and until he is proven to be an unfit parent, Juan Miguel Gonzalez is the parent of his son, and as such, his son's future.

We have read that although he and Elian's mother were estranged, Gonzalez remained involved in his son's life. Even as they fight for custody of his child, Gonzalez's relatives have made no mention of abuse, neglect nor any other evidence that would imply that Gonzalez is not fit to raise his son -- they have only mentioned his love for Elian.

Juan Miguel Gonzalez has been deemed a questionable parent because he cannot afford to give his son the gifts his relatives have given. But there is something more. He is a questionable parent because he is on the wrong side of a political divide: Castro's people have taken up his cause. Perhaps had he denounced Fidel he might have been flown over and placed in a new condominium in Hialeah.

We are being asked to believe, at turns, that this is a case about a mother's sacrifice of her own life to deliver her child to freedom, or that this is really about a great power's unjust immigration laws, or that it is about a victory over a regime so oppressive that even a 5-year-old child would risk his life to flee.

It is about none of these things. It is not, as Geraldo Rivera attempted to frame it on his CNBC show, about "father's rights." It is about a child whose world has been irreparably broken, and who -- despite being surrounded by new toys and new clothes and people who are kind to him -- is in desperate need of being delivered into the hands of an adult who loves him, who he loves in return.

Let us assume that person is his father. Let them be together.

To the people of the Cuban American National Foundation who say they will be "devastated" if Elian goes back to Cuba, be advised that devastation will pale before the pain that Elian will feel if he is deprived of his home for what are so palpably political reasons.

Juan Miguel Gonzalez is Elian's past. He is Elian's parent and must be a part of his future. Not because he has the law on his side. But because until we have evidence to the contrary, I am compelled to believe that is how Elian sees it.

Michael Shapiro is the author of "Solomon's Sword: Two Families and the Children the State Took Away." He teaches journalism at Columbia University.