Nonviolent protesters get hit from both sides at the WTO conference in Seattle. 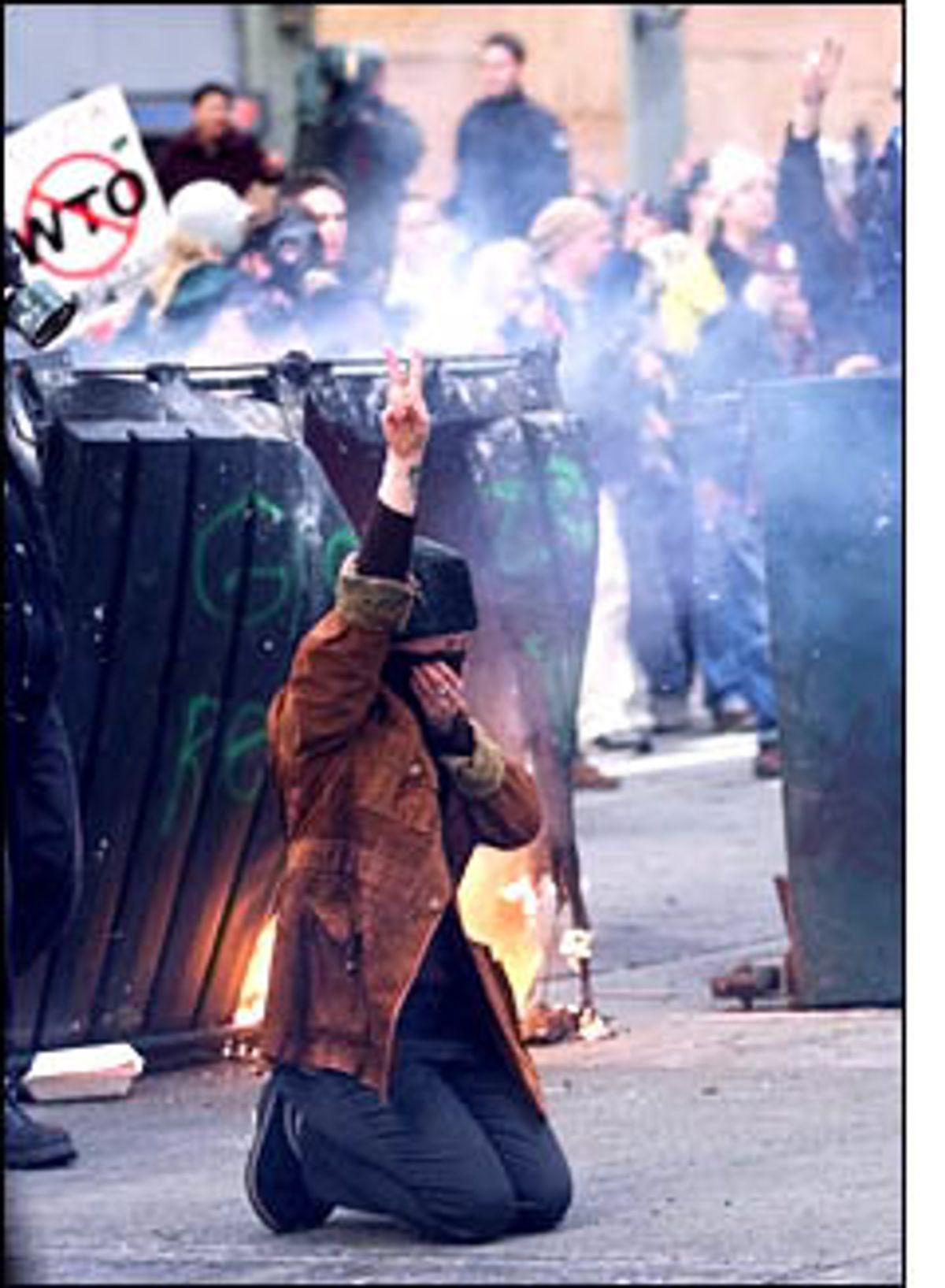 Tuesday's World Trade Organization riot can be summed up by the story of Craig Webster, a friend I know from activist circles in New York. First he was shot with rubber bullets when police opened fire on peaceful demonstrators at the corner of Sixth Avenue and Union Street, and he has nasty welts to show for it. Then later in the day, he was slugged in the jaw by a rioter, while he and some other nonviolent activists tried to prevent the Niketown store from being looted.

Craig's bad luck encapsulated the experience of nonviolent protesters who came to Seattle to focus world attention on WTO -- they got upstaged by violent anarchists and attacked by police, who did nothing until late in the day to stop the rioting. While peaceful protesters vastly outnumbered the hooligans, there were 300 to 400 hardcore anarchists intent on clashing with police, most with scarves over their faces, some carrying hammers, crowbars and spray paint in their bags.

On Wednesday, police arrested more than 300 people, most of them non-violent demonstrators, in a change of tactics designed to clear the streets for President Clinton's visit. Wednesday night, police used tear gas again, to disperse a crowd that began to gather downtown.

But on Tuesday, police allowed the so-called revolutionaries bent on violence to gain the upper hand. Early Tuesday morning, a few blocks away from the nonviolent blockade, small roving groups of violent protesters began tossing newspaper boxes into an intersection, dragging trash bins into the street and trying -- without success at that point -- to smash the windows of downtown stores.

The police pretty much let them do as they pleased. One squad of about a dozen officers in riot gear briefly marched into the crowd at the intersection of Fourth Avenue and Pike Street, but retreated almost immediately, when it became clear that the protesters wouldn't disperse. A little after 9 a.m., I saw two cops grab a demonstrator who was tipping over a trash bin on Pike Street. But they didn't hold him for long: 20 of the rioters rushed the police and brawled with them until they got their comrade free.

But later, I watched as thousands of people blocked the western entrance to the convention center and marveled at their defiant yet peaceful demeanor. Linked arm-in-arm in a huge perimeter around the meeting site, or sitting cross-legged in key intersections, the protesters were achieving their goal of preventing the trade body's meeting, and in a spirit of complete nonviolence. Soon, with no provocation, they were pepper-sprayed by police.

It was no secret -- not to me, and certainly not to the Seattle police -- that this conference would be met with violence in the streets. Rioting had broken out at a "Reclaim the Streets" protest in Eugene, Ore., in June, and in the intervening five months, anarchist militants had been circulating apocalyptic manifestos promising more fights to come. A pre-WTO article in a Eugene 'zine called the Black-Clad Messenger warned, "Tilting at the excesses of the system never gets down to the rotten, death-culture foundations of the system ... Anarchy says it is time to face reality and destroy the global (and local) machine. Phony half-measures and pseudo-critiques and submissive demos are no advance at all. SEE YOU IN SEATTLE!"

And indeed, in Seattle, at a huge public meeting of people planning to blockade the convention center, a young woman announced that 100 gas masks had been ordered in preparation for Tuesday's protest and were available at cost. (Tuesday, Seattle Mayor Paul Schell banned possession or use of gas masks.)

But the police took no action to contain the mayhem that was obviously on the agenda. Instead, they let the rioters run wild while assaulting peaceful protesters with pepper spray, tear gas and rubber bullets.

I was at the intersection of Sixth Avenue and Union Street when the pepper spraying began, and neither I nor three other witnesses I interviewed saw any kind of provocation from the demonstrators. I've been told that some in the crowd started throwing sticks at the police after the gassing started, but I didn't see it. My eyes were burning so badly I couldn't keep them open.

The police could have used a different method to clear the area, by simply arresting all of the blockaders. That's what most protesters expected to happen, and they had undergone extensive training by the nonviolent Direct Action Network to prepare themselves for jail.

But mass arrests of peaceful protesters are time-consuming and expensive, and often bad for public relations. Gassing a crowd is a quick and uncomplicated way to make it disperse. Of course, it's a controversial method, but not if the police and media make it seem like a response to rioting.

In Seattle, some activists from Humboldt County, Calif. -- mostly young, many women -- engaged in what's called a "lock-down action," in which protesters use bicycle locks or other devices to create a human blockade. Lock-downs have been widely used by direct action movements throughout the 1990s, especially by Earth First and animal-rights groups. The devices allow protesters to hold a space -- an intersection, a logging road, an opponent's office -- for much longer than they otherwise could, because it takes considerable time and effort to cut them apart.

Two years ago in Humboldt County, police developed a new way of handling lock-downs: pepper spray. In the most widely publicized incident, four Earth First activists who were blockading Rep. Frank Riggs' office in Eureka had pepper spray applied directly to their eyes with cotton swabs.

At Tuesday's WTO protest, 20 demonstrators from Humboldt County used lock boxes to link themselves in a circle. As supporters gathered around them, you could see thick clouds of tear gas at the next intersection down the hill, where police were dispersing a crowd. Calls went up for vinegar and rags to cover the faces of the blockaders, who calmly sat and waited.

An hour or so later, the police arrived and asked the blockaders to leave. When they refused, cops went around the circle, pepper-spraying the activists in the face. They didn't unlock. The police sprayed again. Still the blockaders stayed firm. After two more attempts, the police finally gave up, ceding the intersection to the protesters.

Obviously it takes extraordinary endurance and dedication to take that kind of punishment, and it's not clear that the gains exceed the costs. In Humboldt County, Earth First has been moving away from lock-downs and toward traditional Gandhi-style civil disobedience: sit-ins, human chains and the like.

But in the Eugene area, the advent of pepper spray has had a radicalizing effect. For about a year, activists have been questioning and abandoning nonviolence. I think the property-destroying tactics used on Tuesday were stupid and ineffective. It's not just testosterone-charged yahoos who are rejecting nonviolent styles of protest, some are seasoned activists who have several years of direct-action campaigning under their belts.

Among them are two young women I've had contact with in the past. I met one in connection with the direct-action campaign to preserve New York's community gardens, which I worked on for two years. I met the other at an Earth First forest encampment while doing research for a book. I didn't see either of them on Tuesday, but I thought about a manifesto that one passed on to me last week.

It read, "Let's not train the thousands of people who gather in Seattle to do no more than be herded by the police, hold signs and offer themselves up as sacrificial lock-down lambs. I'm not advocating a riot. The ground between violence and pacifism is wide, much larger than the ivory tower of either. Meet me there."

L.A. Kauffman is completing a history of American radicalism since the 1960s.